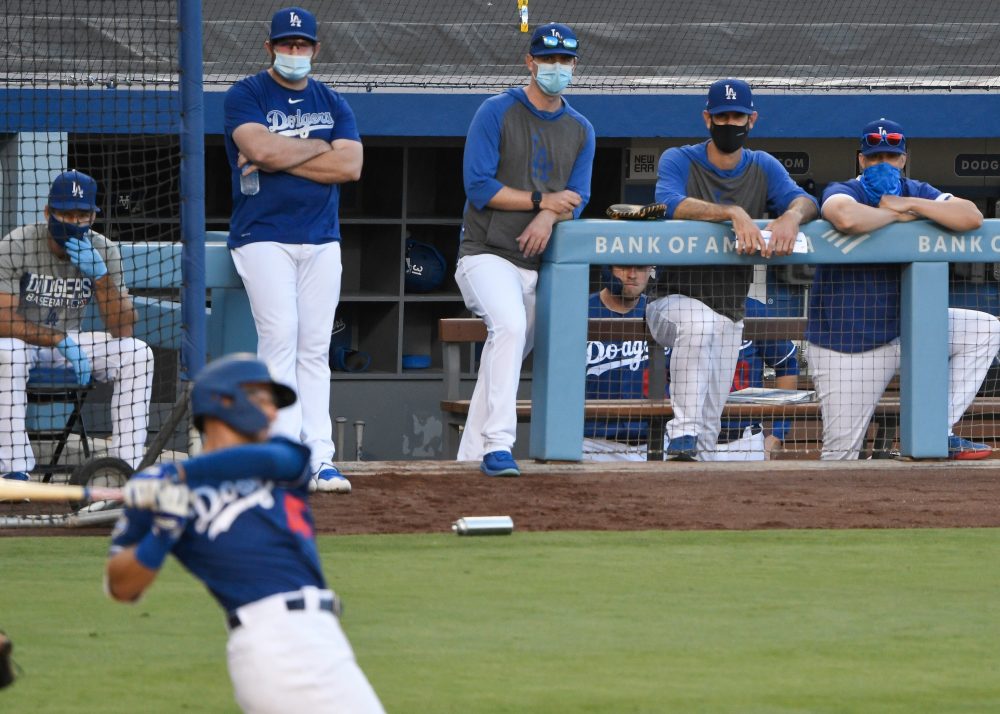 Baseball is metaphor. Strip away the sentiment, the significance we imbue into it, and all that’s left is a bunch of men running around on a field manipulating a little ball. We choose to make it more than that, partially by formalizing it, by adding pomp and ritual, but mostly we give it meaning just by saying it has meaning. In the midst of a pandemic, America has decided that it needs this ridiculous little game which, strictly speaking, is among the least productive use of energy and resources imaginable. It’s also the sinew that runs through relationships and histories, a civic bond during a time when we’re so painfully apart.

It’s good that baseball is metaphor. Sports began, in the age of clattering bronze, as a surrogate for warfare; now, especially in America, they stand in for orderly political discourse. In an atmosphere where shared experience grows endangered, that mutual meaning we pour into baseball–not even a collective rooting interest, just the bare rendering of objective results–provides a starting point in greater, more difficult conversations. After the murder of George Floyd, athletes have used their position in society to talk about racial discrimination and social values in a way that would have been unthinkable just years before.

But even for athletes who don’t speak out, the mere act of wearing a mask while playing baseball, a willingness to abide by certain conditions for mutual safety, makes a statement of its own in a country that often prizes personal liberty over the communal good. Sports are a model society, a miniature televised utopia in which the rules are clear, and everyone abides by them.

The coronavirus is a metaphor. All diseases are, invariably, metaphors, for the same reason that lightning bolts conjured gods to hurl them. Everything requires an explanation, particularly the things we can’t control. And so every epidemic in history has earned some level of personification, or at least divinity, to justify its wrath; leprosy visited the impure, syphilis the lustful, tuberculosis the sensitive and fragile. The archetypes were vital because the alternative was that death could come to anyone at all, and nothing could be more terrifying; sadly, modern medical understanding has failed to provide a palliative. It also had the tidy effect, like all karmic philosophy inevitably does, of implying that the sufferers deserve their suffering.

In her touchstone work, Illness as Metaphor, Susan Sontag differentiated between diseases that fit this metaphorical reasoning, like TB, and the less romantic and more randomized epidemics, like the until-recently forgotten influenza pandemic of 1918-1919. The coronavirus originally fell in the latter category, striking celebrities and operating under mysterious circumstances, manifesting in a variety of ways. Then, rather uniquely, it mutated to match the former category as its contagious properties grew better understood, and the usual machinations of metaphor were built to do their work. As Sontag called it, more than 40 years in advance:

One feature of the usual script for plague: the disease invariably comes from somewhere else. The names for syphilis when it began its epidemic sweep through Europe in the last decade of the fifteenth century are an exemplary illustration of the need to make a dreaded disease foreign. It was the “French pox” to the English, morbus Germanicus to the Parisians …[1]

The key to all of this, Sontag stresses, is to strip disease of its metaphor. Stigmatizing the sick is a form of ableism; Instead of having a disease, they become diseased, just as injured players become injury-prone. It fastens to one’s identity, to the point of obscuring it. Not only does this interfere with the rational and scientific treatment of the disease itself, it creates systemic barriers to finding and implementing a cure. Patients are forced to hide their illness out of shame, or simply to keep their jobs, rather than seek help. They’re forced to make choices, often no-win ones. Research and treatment get deprioritized based on the social status of a minority perceived to be “at fault” for the epidemic. We should treat people as people, not as symbols.

Unfortunately, as the MLB season re-approaches, we’re now mixing this literal disease with a metaphorical landscape, and the results could prove disastrous. Baseball players are already symbols, their identities and responsibilities far more spread out than the rest of us. They have an obligation toward their employers, their fans, their teammates, their families, and some nebulous concept of the game itself, and their own personal safety has to fit in there somewhere as well. Even among those who have done the calculus and declined to participate, there is a distinct pattern, one in which a force other than health takes top priority.

It would be pleasant to think that the choice to opt in, as Joe Maddon claimed, demonstrates a willingness to follow guidelines. In reality the decision turns on a player’s willingness to subject themselves to the conscientiousness of the people around them, and affects not just their health or their family’s, but even their career prospects. These are choices that no one, from baseball players to grocery clerks, should have to be making.

The professional athlete and the 19th-century consumptive share one unlikely commonality: Their bodies are not their own. Both are forced to yield sovereignty to medical expertise, and in the process, they lose autonomy over their own health. We know more about the inner workings of, say, Yoenis Cespedes than we have any right to; his medical history has been annexed by fans and fantasy players alike (historical injury data can be found on our own player cards), and as the game’s biometric knowledge advances, the very same trainers nursing a player back to playing condition after an injury could be employed by the team to diminish their salary demands come arbitration or free agency.

Major League Baseball’s solution to create a separate list for players testing positive for COVID-19, while not explicitly stating that they have COVID-19, is an example of a failed practice. The lack of transparency has led to speculation, considering that all physical injuries are still being reported in full detail as before. The league’s sudden interest in HIPAA compliance, combined with the expectations of fans and media based on a lifetime of public information, has left the players in the difficult position of having to withhold, or provide, their medical status, and potentially suffer the stigmatization that follows.

And it will follow, fair or not; fans will demand that players stick to a far more rigid quarantine than they themselves could possibly stand, just as they expect players to skip the birth of their children or play in pain. The growing emphasis on baseball players as resources already has many fans under the impression that ballplayers should lock themselves and focus on nothing but baseball anyway, given their salaries. As Sontag noted, when diseases become metaphors, they need someone to blame. And the athlete has always been blamed when they can’t perform. This season will only be a new variant on an old theme.

There was a way for this to work, as the CPBL and KBO have demonstrated; there was another way, as Bundesliga and the English Premier League also proved. These organizations operated under a strict set of procedures for containing their leagues within a safe environment, and also benefited from operating within countries attempting to do the same. Major League Baseball players arrived having tested positive, and others arrived without knowing if they’d tested positive, due to public breakdowns in the league’s testing apparatus. Teams have shut down their facilities altogether. The countdown to Opening Day, usually looked upon like a child’s advent calendar, instead almost takes on the foreboding air of a doom clock. This isn’t really going to happen, is it?

And yet it is, almost certainly. Because instead of baseball representing some idealized society, it’s mirroring the less-than-ideal one around it. As the number of positive tests rise, both sport and country have conspicuously refused to draw a line in the sand, to say that this is too much. There’s a quote you sometimes see with small-time attorneys: “Never say sorry after you’ve been in an accident.” Doing so accepts the possibility that you might bear some responsibility later. So it goes with Major League Baseball: Any formalized structure, any specified guidelines unmet can be construed as negligence. As long as there was nothing that could be done, you can’t be blamed.

When fans turn on their televisions to watch this skilled forgery of the arrival of spring, with its empty stadiums and masked ballplayers, it will do more than just entertain and distract. It will serve as a model. So too, unfortunately, will the actions of the league itself, as it plows ahead with Freddie Freeman, Tommy Pham, and an increasing number of players conspicuously absent from the screen. Instead of painting the disease as a real and terrible thing, the context of the coronavirus will instead be gamified, dozens of little blips on the playoff odds graph.

Baseball relies on a closed ecosystem. Money has already threatened the game enough, but as soon as people can die, winning can no longer even pretend to mean everything. The whole exercise falls apart. We can ask baseball players to cast aside their identity from first pitch to last, if they agree; we do the same with soldiers. But we can’t ask them to risk their personal wellbeing once they leave the stadium. Sick people are still people. So are ballplayers.

You need to be logged in to comment. Login or Subscribe
Richard Cramer
More materialistically, I would argue that anything that keeps people at home will be a very good thing for society.

Like baseball.
Reply to Richard
Andrew Ritchey
“Never say sorry after you’ve been in an accident.”

This is spot on. We're seeing this emergent framework everywhere right now, with Trump obviously but also higher ed administration and, as you point out, MLB. The key difference between the "never say sorry" of administrators et al and that of the motorist caught in a routine auto accident is that the former have been granted the authority to dictate the terms by which the rest us of live (or die). That gives them a certain responsibility to ensure the public good, which they're all too happy to toss back on us: revealing, in the process, that they don't actually care what happens to us. They only care about being shielded from litigation.

I know it's a fantasy, but I would love to see a season planned and organized by the players and staff who will actually be taking the physical risk to bring us baseball. This top-down pseudo-planning (i.e. ass-covering) from MLB is not metaphorically but literally going to get a bunch of people sick, or worse.
Reply to Andrew
Tony Mollica
Small-time attorneys?
Reply to Tony