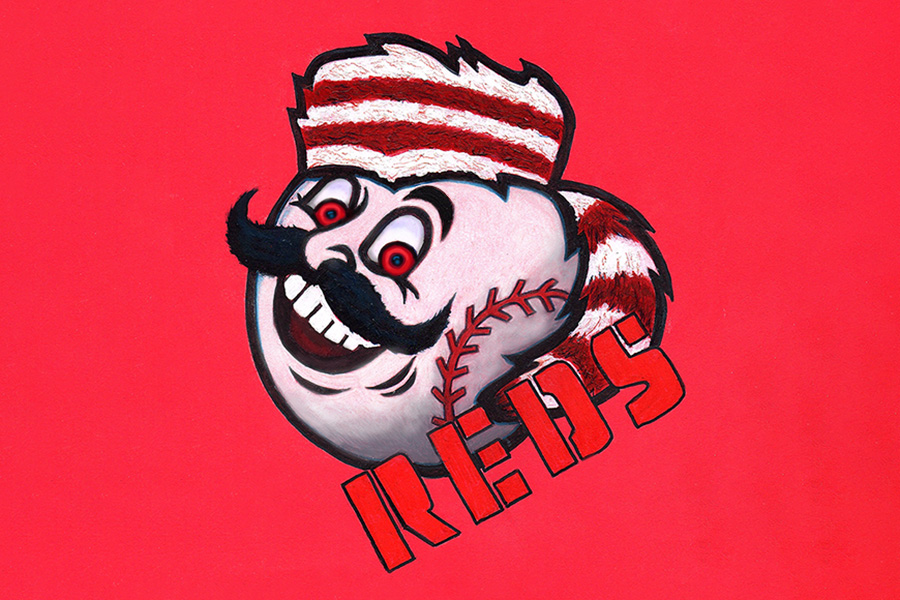 Every Tuesday and Thursday, Too Far From Town shines a light on the 42 (really 43) minor league baseball teams in danger of losing their major league baseball affiliations, effectively leaving them for dead. Today we focus on the Greeneville Reds, a Rookie-level affiliate of the Cincinnati Reds. You could take in the previous installments here.

Greene County was notably a place in the South against slavery during the early and middle 19th century. Samuel Doak, the founder of Tusculum College where the Greeneville Reds play, freed his slaves at the Greene County Courthouse in 1818. Four years later abolitionist Benjamin Lundy moved from Ohio to Greeneville, taking the publication of his newspaper The Genius of Universal Emancipation with him. After Tennessee elected to secede and join the Confederate States of America in 1861, it was Greeneville that hosted the pro-Union East Tennessee Convention, held in a failed attempt for East Tennessee to separate itself from the rest of the state, who saw the upcoming Civil War rather differently than they did.

Andrew Johnson was born in North Carolina but eventually drifted to Greeneville, Tennessee, when the tailor’s apprentice heard the town tailor was about to make his final suit. Greeneville was where he married the shoemaker’s daughter Eliza McCardle in 1827. The justice of the peace who married the sartorial power couple was Mordecai Lincoln, Abraham Lincoln’s father’s first cousin. Johnson was the town’s Alderman by 1829, and the mayor of Greeneville in 1834. Eventually he became the governor of Tennessee and a U.S. Senator. When Tennessee seceded, Johnson said he supported the Union. Abraham Lincoln liked that. He made Johnson his running mate in 1864. Both Union and Confederate soldiers stayed at Johnson’s Greeneville home during the Civil War while he was out of town. The Confederate men vented their displeasure with Johnson through graffiti on the walls. Johnson was Vice President for 42 days when the most infamous performance of Our American Cousin took place. President Johnson pardoned former Confederate leaders, opposed the 14th amendment giving citizenship to former slaves, and vetoed the Radical Republicans who sought to block returning Southern leaders. He eventually became the first President of the United States to get impeached.

The Greeneville Burley Cubs — named after Burley tobacco, not their girth — just kind of appeared one June day in 1920 with a bunch of fans, and the Greeneville Daily Sun went through an emotional rollercoaster following their exploits. The first mention of the team was printed on June 11th, exactly 100 years ago today if you could believe it. The newspaper tousled the Burley Cubs’ hair after their 9-5 loss and told them to keep up the good work. 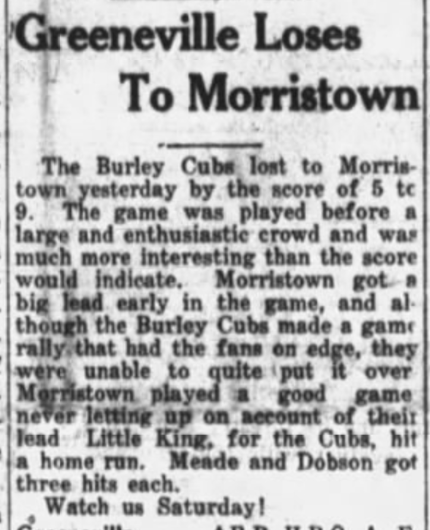 The very next day, the paper was absolutely seething on behalf of the 100 fans who watched Greeneville get their loser butts handed to them yet again, and suggested they probably did not deserve fans at all. 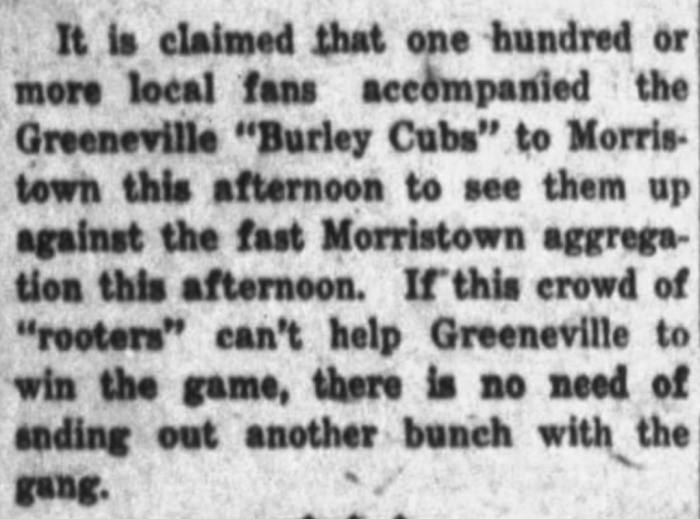 On June 18th, they waxed poetic of the Burley Cub fans, the best fans in the world because they supported a squad not immune to baseball’s propensity for heartbreak. 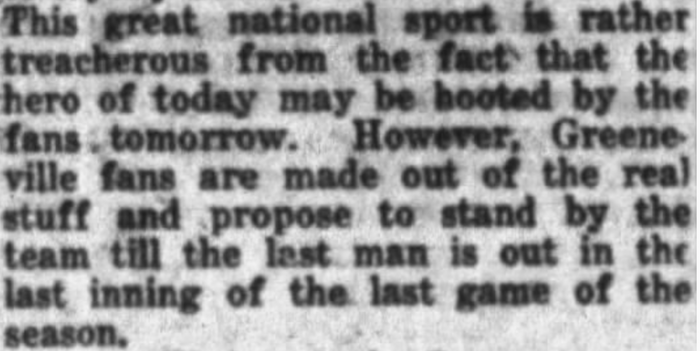 When it reformed in 1921, the Appalachian League welcomed the Greeneville Burley Cubs and their fans composed of “the real stuff” with open arms. After the league folded for a second time in 1925, Greeneville would be without a professional baseball team for 13 years. The Appy League returned for the third of four times in 1937, but it was not until 1938 they remembered the Burley Cubs and invited them back to their box social. Then in 1942, one day in the middle of June and the season, the Burley Cubs went into permanent hibernation. They were in sixth place in the six-team league, and their new fans were either made of the plastic stuff or fighting in World War II. This despite employing a pitcher named “Gil Batman”, several decades before Matt Harvey came along. It probably did not help the box office that he “deserted the bachelor ranks” in August 1941.

Then again, Gil Batman wasn’t from Greeneville, Tennessee like 6’3” 215-pound Dale “Moose” Alexander (Batman was of course from…Pennsylvania). Alexander bookended his professional career with the Burley Cubs, with the meat of his baseball career sandwich spent with the Detroit Tigers and Boston Red Sox. He won the American League batting title in 1932. Moose’s last major league season was 1933. He suffered third degree burns and gangrene when Red Sox trainer Doc Woods tried to heal Alexander’s twisted knee with diathermy treatments. He was the player-manager for the Burley Cubs in their final season of 1942, hitting .158 in 19 at bats. His playing career was over, but his time in his hometown wasn’t. Alexander in 1942 ran for town sheriff.

His opponent was two-time Greene County sheriff Ben Renner. The interesting portions of Renner’s plea to the voters in The Greeneville Sun were Renner reminding Greenevillites he wasn’t corrupt the previous two times he wore the badge, and both “especially” pledging to make sure there continued to be no selling of liquor or gambling in the town as well as “especially” appealing “to the good women” of Greene county for “their loyal support.”

Alexander in the same newspaper admitted to no public office record before boasting of Greeneville as his birthplace, and of owning the farm where he was born. (He said in an interview around this time, “Now I’m thinking more about votes, my 16 milk cows, and my tobacco patch.”) Like Renner he too wrote he was against liquor and gambling. He spoke of his loyalty to his church, country, and family, in that order. Then in the fourth paragraph, he differentiated himself from his opponent. He addressed the Black voters: 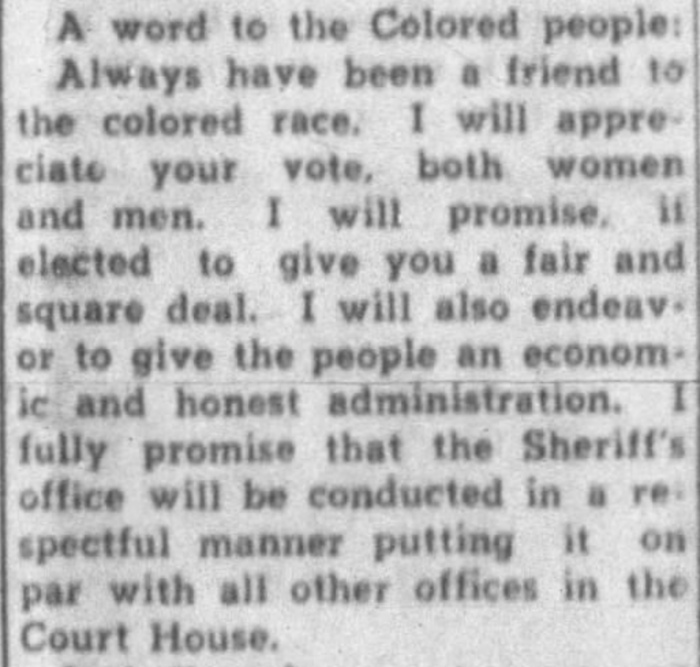 In 2004, in what retrospectively is proving to be painfully ironic, professional baseball returned to the town of Greeneville, Tennessee after 62 years as an affiliate of … the Houston Astros. Yes, the Houston Astros, the team that employed Jeff Luhnow as general manager, the one who planted the seed that at least one quarter of minor league baseball teams are irrelevant, that prospects should be raised in a lab, not a barn, once upon a time willfully filled up a Rookie-level roster based in a town with a population of just over 15,000 people.

José Altuve was a Greeneville Astro in 2008 and 2009. Did he steal si – I don’t know if he stole signs. And he was there for two seasons, so no I wouldn’t say there was much buzz with him at the time either. He only hit five home runs in those 360 plate appearances so no, he wasn’t tattooing the ball exactly. There’s nothing but warm and fuzzy anecdotes about young Altuve in Tennessee. He tagged along with Colton Pitkin for a ride from spring training in Kissimmee, Fl. to Greeneville. Altuve patiently, 10 hours worth of patience according to Pitkin, listened to Colton’s preferred country music. After Altuve asked if he could play some of his music, Pitkin acquiesced. José processed to sing along to Brian McKnight “with the passion he plays baseball with.” Stuff like that.

J.D. Martinez was a G-Stro in 2009, with Altuve. The Div. II draft pick remembered finding himself as the fifth or sixth outfielder, only getting to play when one outfielder got a promotion, another pulled his hamstring, and a third’s chin lost a battle with the outfield fence. His manager Rodney Linares later told him “you weren’t supposed to play a lot.”

Following the 2017 season, the Astros decided they did not need a Rookie-level team.

The Cincinnati Reds were happy to be in Greeneville. Proving they have the opposite approach to player development than Houston, the Reds in 2018 were one of only two Major League Baseball franchises with a team in both the Appalachian and Pioneer Leagues. That being said they very much phoned in their mascot, which is literally the Cincinnati Reds’ mascot, Mr. Redlegs, in a hat. The hat is a Davy Crockett raccoon hat. His name is Davy Redlegs. You get it? Davy Crockett, who was born in Greene County when it was technically in North Carolina — his first name is Davy and…well in any event, the Greeneville Reds’ first win was a doozy. They were up on the Bristol Pirates 12-0 after five. They won 13-12 thanks to a 9th inning relay from RF Reniel Ozuna to 2B Claudio Finol to C Hunter Oliver. They learned how to hold on. And their bullpen was hot garbage. But mostly the holding on.

You need to be logged in to comment. Login or Subscribe
newsense
The cumulative excellence of this series is amazing. Each article is a unique irresistible gem.
Reply to newsense
Roger Cormier
Thank you!
Reply to Roger