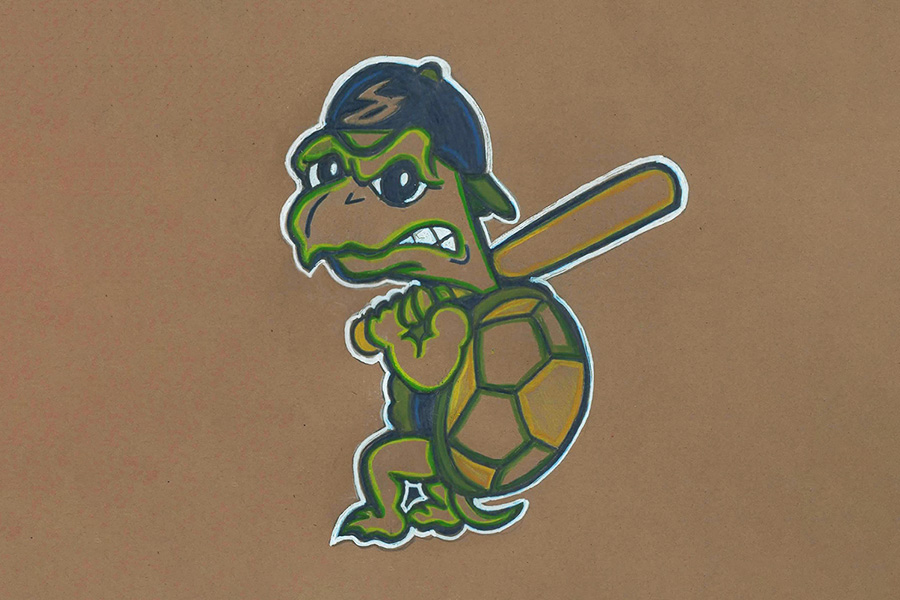 Every Tuesday and Thursday, Too Far From Town shines a light on the 42 (really 43) minor league baseball teams in danger of losing their major league baseball affiliations, effectively leaving them for dead. Today we focus on the Beloit Snappers, a Single-A affiliate of the Oakland Athletics. You could take in the previous installments here.

You know that weird aunt that everyone seems to have? If there’s a thing that can be shaped like an owl, then Aunt Betsy has 42 of that thing? Beloit is what it would look like if Aunt Betsy were a town. There’s Turtle Island and Turtle Creek, and the adjacent town of Turtle. There’s the Little Turtle Playhouse and the Turtle Island Playground, the Twin Turtle quilt shop, and the Turtle Tap Bar. Google Maps seems to be under the misapprehension that there’s also a nightclub called the Goat Hole, but we don’t have to dive into that. In fact, I wouldn’t advise anyone to dive into the Goat Hole.

Beloit’s minor league team started out as the Brewers in 1982, but it was only a matter of time before they switched to something a little more turtletastic. When they did switch, the story goes, there was no money to hire a graphic design company. A relative of someone in the front office did the work in exchange for some merch bearing the anxious, muscly turtle they’d drawn.

Since the mascot was known as Snappy D. Turtle, it seems safe to assume that the team left the job of naming it to somebody’s nephew as well. On second thought, I take that back. Snappy D. Turtle is what my actual Aunt Betsy might have named him.

The real tragedy is that back when they were the Brewers, the team had a fantastic mascot with a bitching pun of a name: Brewsteer. That’s right, it was a steer in a Brewers jersey. Brewsteer. You’re welcome.

In a true indictment of our society’s priorities, there are no pictures or drawings—zero—of Brewsteer available online. Who did what to Brewsteer? Where did Brewsteer go? The only photographic evidence that he existed at all is a set of pictures of a bobblehead on Ebay. In it we see that Brewsteer, hewing closer to a minotaur, has the upper body of a steer and what are clearly human legs wearing cow-print pants. He points straight ahead, his soulful eyes rolled ever so slightly skyward, as if to say to Beloiters and to beef-loving Wisconsinites everywhere, “Hey. Hey you! Please don’t eat me.”

I bring up the snapping turtle’s capacity for viciousness because right next to the Brewsteer bobbleheads—the ones where Brewsteer seemingly implores you not to partake of his delectable, marbled flesh—you can find some Snappy D. Turtle bobbleheads. Here’s Snappy standing awkwardly with a bat, and here’s Snappy standing awkwardly with a rake, and here’s Snappy just standing awkwardly. But the one that stands out shows Snappy as some sort of unholy cross between Oedipus Rex and Titus Andronicus. Snappy, for once in his turtle life, looks not the least bit awkward. He looks, if anything, regretful. He stands there, hand on his turtle hip, head cocked to the side and eyes pointed toward the heavens, wondering whether anyone up there knows about the grave sin he has just committed. You see, Snappy is wearing an apron. Snappy is holding a spatula. Snappy is standing next to a grill, flipping burgers.

At least we know what happened to Brewsteer.

(Turn the above up, volume wise.)

Harry C. Pohlman died on Valentine’s Day 1987. Pohlman’s obituary in the Wisconsin State Journal did not know his full middle name, but it did claim with certainty that if you added up his lifetime of work coaching baseball in terms of wins, losses, and ties—if you counted up the near decade’s worth of games Harry witnessed as the first baseball coach Beloit High School ever employed, and as the manager of the Beloit and Independence, Wisconsin American Legion teams—you would find his record to be 799-183-11, and at the end of three of those 799 victories, Harry’s team won a state championship. From 1982 until 1986, for the first five seasons of its existence, the Beloit Brewers played in a ballpark named Telfer Park. Just prior to Harry’s passing, it was renamed Harry C. Pohlman Field. The obit said it was due to his “dedication to youth of Beloit through baseball.” It also said that in Beloit, Wisconsin, Harry C. Pohlman was known as “Mr. Baseball.”

The Beloit Brewers/Snappers never clinched a Midwest League championship at Pohlman Field. Their lone title was a three-game sweep of the Michigan Battle Cats in 1995, and they finished their business in the Battle Cats’ home park in Battle Creek. The Snappers’ pitching was patently ridiculous during the playoffs. If you were to add up the ridiculousness in terms of earned runs and innings pitched, you’d only count three earned runs in 80 innings. 17 days after the game, the Battle Creek Enquirer reported that USA Today determined pitcher Jeff D’Amico was the best prospect in the Brewers farm system. The Enquirer also said that D’Amico was nicknamed “the Maddux of the Midwest League.”

1995 was also the year the Beloit Brewers became the Beloit Snappers. Per his official bio, their mascot Snappy D. Turtle was born on June 1st of that year. It claims he still watches the Teenage Mutant Ninja Turtles, and likes 60s music, “especially” The Turtles, and Snappy fell in love with baseball the first time he saw it and the organization put Snappy to work ever since. It is obvious the bio was a writearound that would make Gay Talese blush, for Snappy’s happiness has clearly been frontloaded. A turtle of all creatures experienced nirvana too fast. Snappy was zero years old when the Snappers won their title, and never again. Twenty-four plus years have passed. Snappy has witnessed many games at Pohlman Field. Turtles can live for 80 years. Presumably, he will witness many more, with more players with more nicknames. Snappy himself will earn nicknames of his own, some original, some derivative, most forgotten. Presumably.