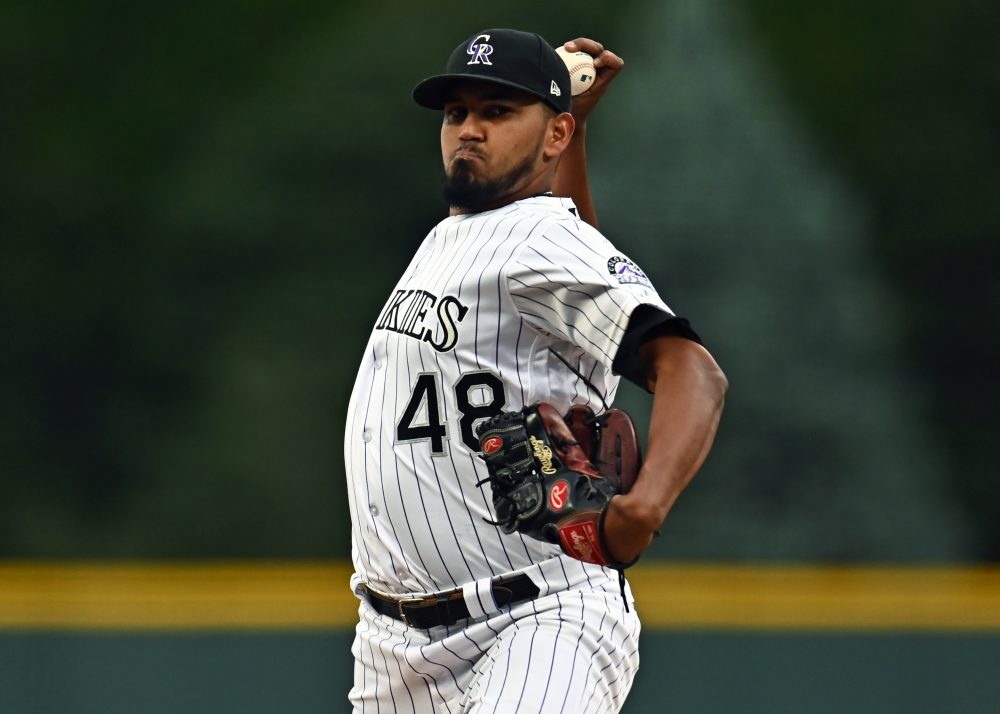 The last several years have been famously unkind to the sinker. It’s an endangered pitch because, in the eyes of too many, getting swings and misses is the first job of a pitcher, and the sinker doesn’t miss bats. Yet, the realization that four-seamers and breaking balls and changeups all induce whiffs more often than sinkers didn’t drive an immediate extinction event. Even pitchers with elite stuff (and especially those with anything less) need to be able to pitch to both sides of the plate, and to confound an opposing batter’s expectations. For many hurlers, the sinker is the easiest pitch to locate to the arm side of home plate, so it still has a role, even if it’s been relegated to a set-up, show-me offering in some cases.

If you can’t throw your sinker for a strike, however, you’re not showing your opponent much of anything, and you’re likely to set up only a hitter’s count. 126 pitchers threw at least 200 sinkers in both 2018 and 2019. Let’s examine the ones whose Called Strike Probability on the sinker changed the most, to try to discern any patterns in sinker usage or command.

In 2019, the median Called Strike Probability on sinkers was 52 percent, so Alcantara turned from a zone-pounding sinkerballer into an erratic one. That is, as one might guess, a bad thing. The formerly hard thrower now sits in a painfully average 92-94 range with the pitch, and the results are what one might expect. He had a 2.40 ERA in 2018, and while that was utterly unsupported by his peripheral numbers (105 cFIP, thanks to a 1980s-esque bullpen strikeout rate), one could at least see how it was happening. Alcantara walked just six in 30 innings and kept the ball on the ground. In 2019, he walked 15 in just 43 frames and things went pear-shaped. Without a more reliable changeup or slider, or at least the ability to keep the sinker on the plate and entice some reaching swings, he’s doomed to flame out fast.

Unlike Alcantara, Alvarado still throws very hard, and thus (unlike Alcantara) Alvarado had the full attention and confidence of many close baseball observers coming into 2019. He was dominant in 2018, and he did it with a wild combination of velocity and arm angle that made his sinker famous among consumers of Pitching Ninja’s GIFs.

Alas, that delivery takes a heavy toll on a couple of key structures in the kinetic chain, and Alvarado simply burned out in 2019. His loss of command of the sinker stemmed from a physical inability to keep doing what he’d trained himself to do, with the same fine control and consistency with which he’d done it the previous year. His walk rate ballooned, batters got over the unusual way the ball took off out of his hand and began hitting it harder, and he was largely unable to adjust. He still has the ability to miss more bats than sinkerballers with less velocity or more conventional arm paths, but the rest of the pieces that make up a dominant reliever have abandoned him, perhaps forever.

Though the direction of change is the same, Bowman made a different, more intentional, and far more effective adjustment in 2019 than did Alcantara or Alvarado. In a new organization and with a new pitching coach (Derek Johnson, who may have been the brightest silver lining in the Reds’ disappointing season), Bowman went from only being able to fade the sinker to the third-base side of home plate to consistently throwing it at and just below the knees of opposing hitters, all the way from off the plate on that third-base side to off the plate on the first-base side. By sliding even further to the first-base side of the rubber and lowering his arm angle slightly, he was able to deploy the pitch with more feel and flexibility. He’ll never be more than a low-grade middle reliever, but he made huge forward strides in 2019, and they were built on his improved command of both halves of the plate with the sinker. 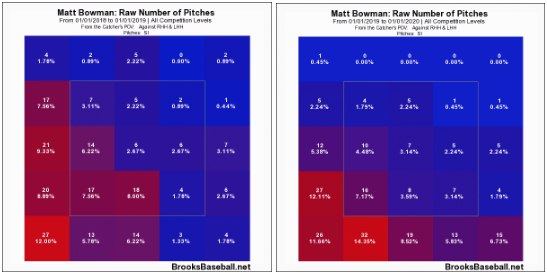 Chatwood is an excellent example of a pitcher who was imperfectly suited to the hyper-modern adjustment set so many teams apply to any hurler they get their hands on—and it didn’t help that he landed with Chicago just when they had fallen as far behind the curve in that kind of optimization as an organization can get. They tried to turn him into a four-seamer and breaking ball guy. They tried to eliminate a delivery quirk that, as it turned out, was integral to his timing signature. With a renewed focus on what he does well in 2019, Chatwood got right in a big way. Note that even with the big increase in sinker CSProb, he’s merely average. That’s the nature of the beast with him. He’ll never have great command. With his barrage of cutters, curves, and the sinkers moving the opposite direction, though, Chatwood can be hell on opposing batters, if he can just keep any of them over the plate. The sinker keeps them honest, and even defensive, not least because Chatwood pumps it in at close to 100 mph at times. It’s a nasty pitch, yet it can be hammered when it wanders over the heart of the plate, and that sometimes makes Chatwood skittish about attacking the zone with it. He’s at his best when pitching fearlessly, and having command of the sinker allowed him to do that more often in 2019, even if he still needs to rely more heavily on other offerings in order to get whiffs.

It’s now been a full decade since Erlin showed up in the Rangers system, pounding the zone relentlessly despite modest stuff. He’s still doing it, though in 2018 the Padres sent him back to the bullpen, probably for good, and things got a little hairy for him there. Erlin threw five different pitches (four-seamer, curve, sinker, changeup, and cutter) at least 10 percent of the time in 2019, and his greatest strength—command of the entire arsenal—got a little weaker. Maintaining that many offerings in a role that is probably Erlin’s permanent one is tricky. If he can’t do it, though, he’ll get into trouble quickly, because he counts on the wiggle of the sinker and cutter to keep hitters off his fastball.

Everything about Gonzales’s 2019 was bizarre. Pitching for that Mariners club, particularly with a miserable defense behind him, could not have been easy, and on the surface, his numbers held up admirably: Gonzales had a 4.00 ERA in 2018 and a 3.99 in more innings—and with the aeroball in play—in 2019. On the other hand, his cFIP (105, up from 87) and DRA- (119, up from 80) suggest he took big steps backward.

Very few pitchers lived as near the middle of the plate with a sinker as Gonzales did in 2019, and he did that despite seeing a continued drop in velocity on the pitch. 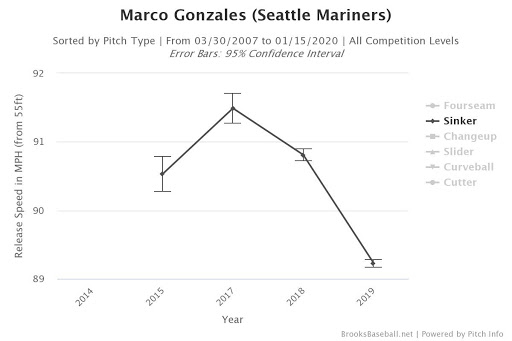 Gonzales has a very pretty, very athletic-seeming delivery, and he repeats it gorgeously. However, it might be starting to work against him. His stuff is fading, and isn’t well-suited to continuing to attack the zone the way he does right now. He got away with it in 2019, and that was more by design than by good luck, but that doesn’t mean it’s repeatable. He needs to find some funk, something that allows him the command not to throw a strike at times.

This isn’t Gonzalez’s first appearance in this series. He’s becoming a delightfully, inexplicably crafty old lefty. And in this case, that wiliness manifests itself in staying well out of the heart of the zone with his sinker. If batters want to hack away at it, they can, and they do: Gonzalez induced swings on a higher percentage of his sinkers in 2019 than in 2018. He’s not going to throw one anywhere near their happy zones, though, and thus the appealingly flat and undaunting pitch on which they’re ready to feast tends to eat them up instead.

For a sidearm sinkerballer, throwing fewer strikes means hitting more spots. The heavy, fading action on Kolarek’s sinker makes him an exceptional ground-ball getter, but when he was able to start consistently getting the pitch down, he also became more effective at missing bats, because he started fooling batters into more weak, late hacks. A lot of low-angle lefties use the sinker solely to fill up the first-base side of the zone, setting up other pitches on the first-base side, but Kolarek has improved at getting across his body and hitting the lefty batter’s outside corner, too. Thus, as long as he’s able to keep it at least knee-high when he needs to, he can force batters to cover the whole plate.

The polar opposite of Gonzales, Márquez had a virtually identical season in 2019 to his breakout 2018, according to the advanced numbers. He even posted 4.7 WARP in each campaign. Yet, his ERA rose a full run in 2019, so the Rockies and their fans had a very different experience of his season.

Márquez did some things better than ever in 2019. His walk rate ended up at a career low, and his ground-ball rate ticked up from his two previous full seasons. He’s developed two excellent and distinct breaking pitches, in his curve and slider, and misses bats with his four-seamer.

His big mistake, it would seem, was that he controlled the sinker, but couldn’t command it. This location chart indicates he just couldn’t stay out of the middle of the plate with the pitch. 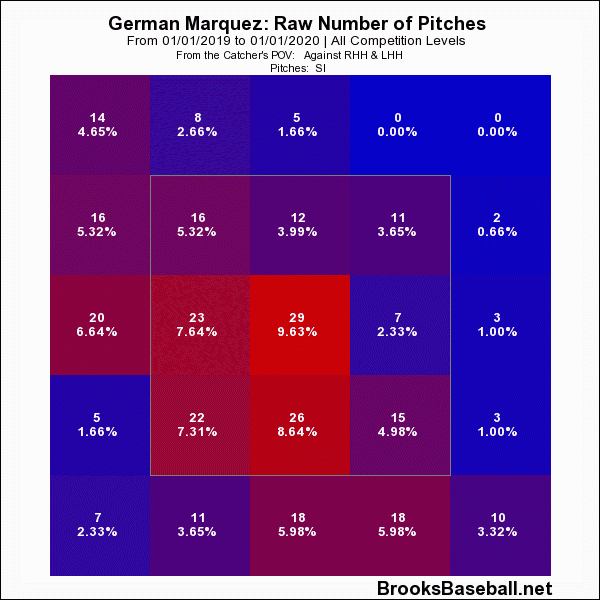 If he can get back his feel for landing the pitch on the inside corner to righties, or even push it consistently further in than that, he might rediscover utility in the sinker. In 2019, however, opponents hit .371 against the pitch, and if good command is going to remain that elusive, Márquez should just junk the offering. He only got one strikeout with it last year, anyway.

Some pitchers should simply not throw the sinker. Most could benefit from it, if they have a role and the time and feel to develop it as a secondary offering. In any case, however, it’s the pitch for which command to the edges of the zone is most important. Sinkers in the heart of the dish get obliterated. Sinkers outside the zone get spat upon. Location supersedes velocity and movement for the true fastball’s flatter cousin, and this group of hurlers helps prove it.