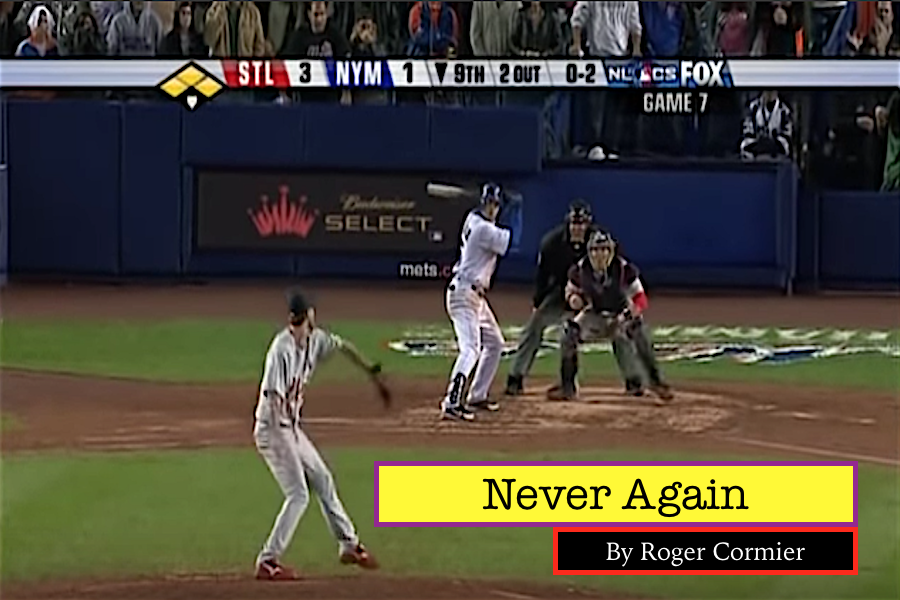 An 83 mile per hour changeup.

I guess it was a changeup. Maybe that’s his slider…

I see you, Adam Wainwright.

I would bet anything on it.

The Mets paid me $119 million for this. To bring Pedro in here. To change the culture.

And that’s what I’m about to do.

Because I know what’s coming.

And if I’m wrong, I’ll do what it takes to fix it. 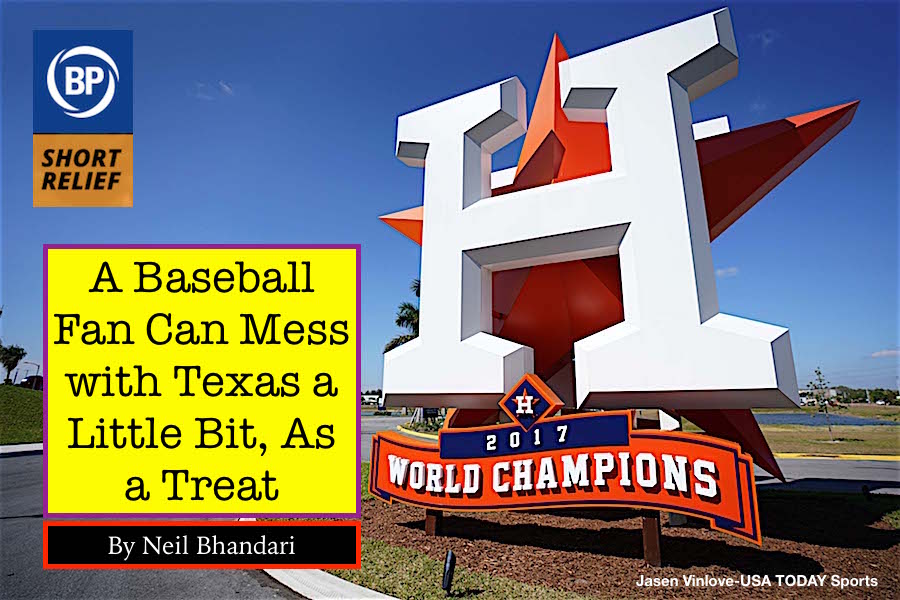 Long time — how’ve you been? So I guess the last time we saw each other or even spoke was at your wedding, yeah? What was that, 2013, ’14? I appreciated you inviting me — I know by that time we’d both been well aware that our friendship had run its course, but I’m glad we were able to hold on until such a momentous occasion to finally put a bow on it. It bookends nicely with our having met the first week at DePaul. And it finally gave me a chance to visit Austin, a city I’d long been curious about. Good time all around.

Oh, you know what I was just thinking about? That Cubs game we went to in the fall of 2001. They had unexpectedly managed to stay within shouting distance of the division, but losing that game against your beloved, division-leading Astros, dropped them to 9 games back with 9 left to play, all but eliminating them from the postseason. As we shuffled out of a somber and nearly silent Wrigley Field you said, barely able to contain your giddiness, “well, at least they stayed in it longer than you thought they would.” By that time I’d known you well enough to know that the only thing you handled worse than losing was winning, so rather than deal with your smugness on the el ride back to campus, I made up an excuse about needing to meet my brother at Belmont and we parted ways. I guess you were always kind of like that. It only took two months of knowing you before ▉▉▉ and I started calling you “Long End” because you were so unfamiliar and uncomfortable with self-deprecating humor, and every story you told ended with you getting the ‘long end’ of the stick. Every restaurant you’d ever grown up eating at was not only the best of its kind, but one the rest of us would never be lucky enough to experience, because “that buddy’s closed now.”

Speaking of  ▉▉▉, remember that time when he got a bunch of us access to the private rooftop of ▉▉▉▉▉▉’▉ – that bar across the street from Wrigley? My girlfriend from back home was in town, and when the owner said that we were one over the limit, I said, “well I’m not gonna make someone else go home,” you yelled, “I am!” and marched right into the bar. Wow haha what a turd. But I will say this for you, ▉▉▉▉, you did begrudgingly come around on my impression of you. You’d let me interject “Two ta nuthin’ ‘Strosss; Bidg’ doubled, Baggs hawmerd” with your crusty Texas drawl into any conversation without protest and eventually even came to laugh along. Respect.

Oh, dang, you know what else I just remembered? YOUR BACHELOR PARTY! Cubs-Astros in the bleachers at Wrigley followed by some bar-hopping, right!? That sounds like fun. I got drinks with ▉▉▉ soon after he got the invitation and he mentioned something about it. Said that you had decided not to invite me because a few of your Texas buddies would be there, and you didn’t want me to make a scene if they dropped some casual homophobia. That’s fair — I probably would have.

Anyways, I hope you’re doing well, ▉▉▉▉. Considering that we lost touch right after the wedding, I guess I never got a chance to congratulate you on your boys winning the World Series, did I? I’m sure it was an incredible night and week and month for you. Having experienced it myself only a year prior, I know how special it must’ve been. And look, I’d hate for the events of this week to diminish the experience for you. I’d hate for you to feel like all of that joy was fraudulent; that the dream you’d dreamed for lo some 30-odd years came true only to be proven a farce. I would sincerely, and I mean this, hate for that elation to be melted down in the heat of accepting that the Astros’ rebuild, the technological advances, the strategy, the expectations–all of those years you spent waiting and hoping–would’ve been rendered meaningless if not for a bat and a trashcan. I’d hate that, ▉▉▉▉. Oh, haha remember that time you drank a toenail? Lol eff you.

Give my best to Texas, 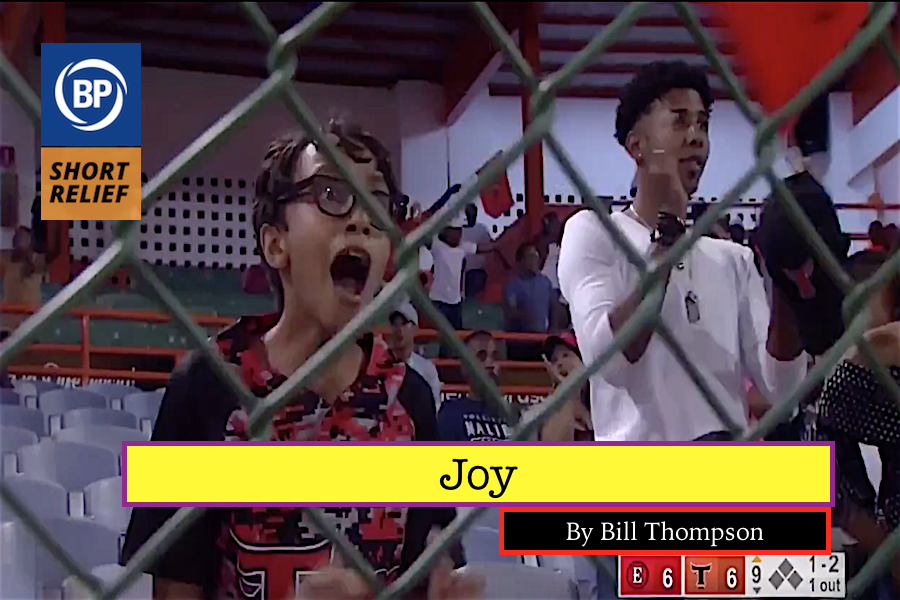 Writing about baseball is both easy and hard, much like playing the game itself. The hard part is often because of the way we approach the game. There’s an innate desire to relate everything to our experience of a game, player, team, etc. In doing so we often exclude the equally valid experiences of others. We use I language far too often, get anecdotal in our stories, and revert to base solipsism on a regular basis.

Writing about baseball is often at its easiest when we are looking at the game through the eyes of someone else. Removing the I from the equation and instead focusing on the collective we tends to bring about a more honest appraisal. Never has this been truer than when the subject at hand is the inherent fun of baseball. I can tell you that baseball is fun until I’m blue in the face, but if all I’m doing is relating my experience then my words may fail to truly connect with your baseball experience.

Every once in a while something happens on a baseball field or in a baseball stadium that lets all of us share in the joy of baseball. It’s not just me having fun, it’s someone else having an experience that we can all look at and describe as joyous fun. In a Liga de Béisbol Profesional de la República Dominicana game this season, one fan was particularly enjoying themselves at the ballpark. His hometown Toros del Este were in a tie ball game against the 2019-2020 season powerhouse Leones del Escogido. Throughout the game, the camera kept staying on this approximately 10-12-year-old kid behind home plate. The reason was easy for all to see, this Toros fan was enjoying the heck out of the ballgame.

When his Toros came back to tie the game he could be seen clapping and grinning. As the game moved into extra innings the camera would focus on his pained expressions as the Toros squandered chances to win or looked to be ready to allow Leones to score. Then the Toros did come through, they walked off the league titans and the camera person did what they knew they had to do, zoomed in on the young Toros fan and let his reaction tell the story all on its own.

Just look at the pure joy and amazement rolling off of him. Thinking of a time when I’ve been that happy makes me happy, and I know pretty much everyone can relate to that. In this moment of this one regular season LIDOM game, this young Toros fan is the pure distillment of what we all love about the game of baseball. In a time when the negative aspects of baseball seem to be coming at us in a never ending wave, reactions like the one above are needed more than ever. Baseball is fun and joyous and at its very best it is the epitome of humanity. The child above is baseball joy come to life and that’s something we can all relate to, in our very own way.

You need to be logged in to comment. Login or Subscribe
Robert Murray
Thanks for the 'Joy' segment. That kid's reaction is awesome!
Reply to Robert