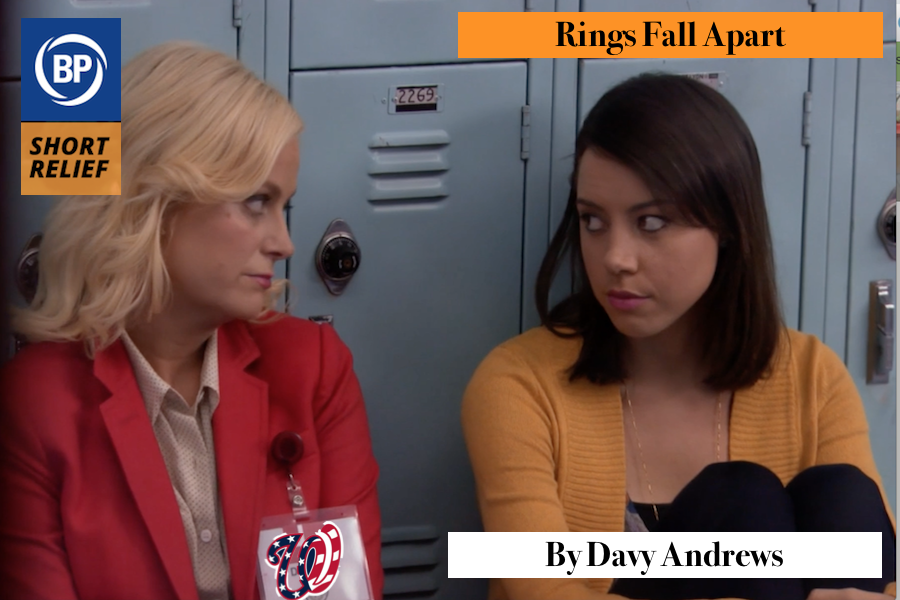 It’s one of my favorite lines from Parks and Recreation. The line from the actual moment when everything falls apart — The only thing I will be waving is your decapitated head on a stick in front of your weeping mother — that’s pretty good too. But an empathetic friend, eyes full of love, letting you know that watching your world disintegrate was, at least, quality entertainment? That gets me every time.

I’ve been thinking about that line a lot lately. The Nationals won the World Series, and now they will fall apart, the players all going their separate ways. “Damn the wheel of the world,” Jack London wrote (and then Leslie Knope also wrote). “Why must it continually turn over?”

Gerardo Parra, if not the team’s soul then maybe its fun uncle, has already signed with the Yomiuri Giants. Stephen Strasburg and Anthony Rendon, who make up 14.6 WARP and the bulk of the team’s Strategic Facial Hair Reserve, are free agents. What if they sign with Yomiuri too? Are they going to lose all their players to team that’s known as the Yankees of the Japanese league? I can’t cheer for the Yankees!

We only have so much control over what we care about. I’m starting to think I should use my allotment to switch from dreading the deconstruction of the 2019 Nationals to enjoying it. It can be fun to watch things fall apart. Just ask this tower I built with my niece. 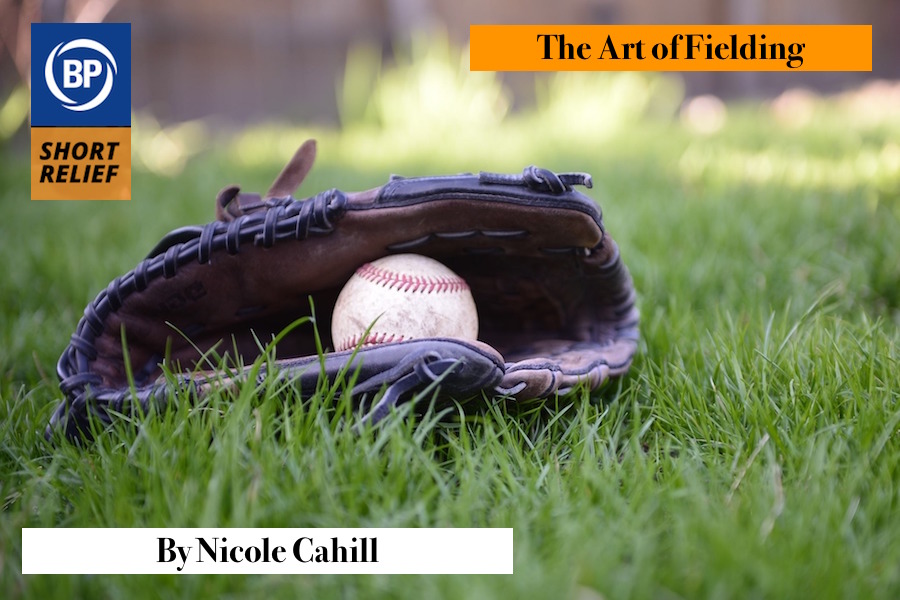 Baseball was an art, but to excel at it you have to become a machine. It didn’t matter how beautifully you performed sometimes, what you did on your best day, how many spectacular plays you made. You weren’t a painter or a writer — you didn’t work in private and discard your mistakes, and it wasn’t just your masterpieces that counted. What mattered, as for any machine, was repeatability.

I don’t consider myself an athlete anymore. When I played softball, I dreaded the thought of becoming a machine. That didn’t stop me from trying to become one. The art form that was the game was never lost on me, though. I appreciated it with all of my heart, truly becoming a student of the game. That’s not who I am anymore, though. Now, I’m a writer.

You stood and waited and tried to still your mind. When your moment came, you had to be ready, because if you f—ed up, everyone would know whose fault it was. What other sport not only kept a stat as cruel as the error but posted it on the scoreboard for everyone to see?

As a writer, I feel like I go through the same process. I sit down at my laptop and try to still my mind. I write and write, edit and edit, and do my best to be ready. Writing can be cruel sometimes, but so can baseball. Making a mistake and knowing you messed up is harsh, but a large ‘E’ for everyone to see can be even harsher. I know the feeling firsthand. The simple truth is that we cannot become machines. Although I do not dare to share my rough drafts with the world, not every piece is a masterpiece. Becoming machine-like is impossible. We are humans with human thoughts, human feelings, and human actions. Nothing we do is perfect, even if all of our intentions are good. That doesn’t stop us from trying, however. I tried my whole career to become a machine, someone that my team could trust when the game was on the line. As I walked off the field for the last time, I realized that being a human and being a machine are mutually exclusive. I cannot separate my feelings from who I am.

It always saddens me to leave the field. Even fielding the final out to win the World Series, deep in the truest part of me, felt like death. 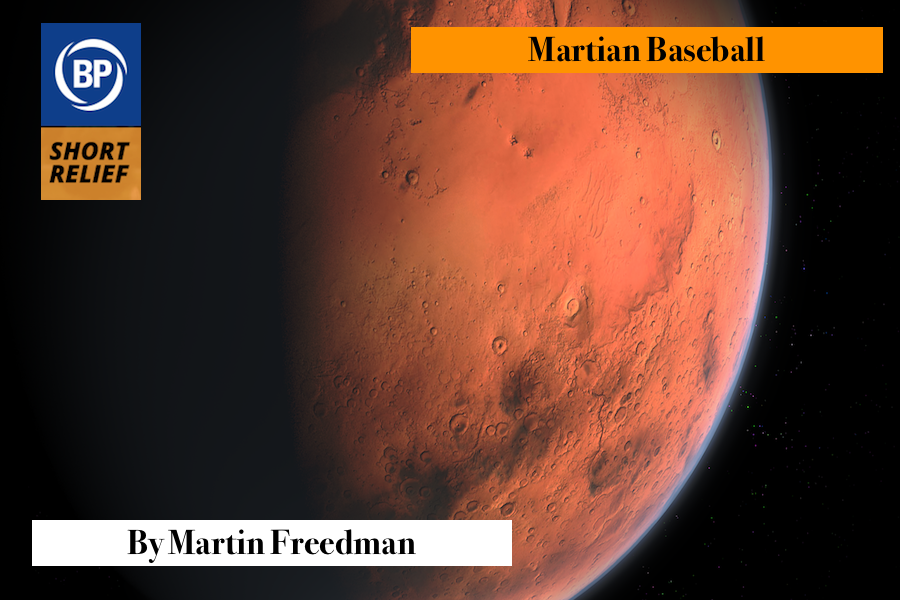 The Martian might be my favorite book. The story is simple and accessible, the prose is formulaic but effective, and the combination of nerd science and dry humor fits my interests perfectly. I can read it or listen to the audiobook or watch the movie an endless number of times without losing enjoyment. It doesn’t hurt that the audiobook and movie are both fantastic. But on my latest reread, I noticed something, and I can’t get it out of my head.

On Sol 11, our protagonist’s log entry is one sentence: “I wonder how the Cubs are doing.” Understandable. When you’re alone on an entire planet, the mind tends to wander, and he’s been out of contact with Earth for about a week. But on Sol 16, the log entry informs us that it’s Thanksgiving on Earth. (NASA’s psychology team deciding the Mars crew should prepare a Thanksgiving meal from scratch, rather than just eat more prepackaged rations, is how Watney has a stock of potatoes that he can plant and grow as crops.)

All of that is well and good, but look at those two numbers. A Martian day is roughly the same as an Earth day, so in the span of five days Mark Watney went from wondering about his baseball team to Thanksgiving. The conclusion is obvious: In the unspecified near future year that The Martian occurs, MLB’s schedule has shifted such that the Cubs are playing in late November. And no, it can’t be that they’re in the playoffs: when Watney gets in contact with Earth three months later they inform him that the Cubs finished in last place in the division.

So, in this world, the major leagues are playing regular-season baseball as late as November. What does that look like? Is there a Detroit Tigers/Texas Rangers Thanksgiving game, a la the NFL, where the winning team cuts into a turkey on the baseline? And what about the postseason? Are there World Series games on Christmas? Unless every team plays in a climate-controlled indoor stadium, there would have to be some games played in super-cold weather. Even a little bit of snow would give pitchers an extra element of deception, but they’d have to work extra-hard to grip the ball properly.

Or Andy Weir just needed a throwaway joke and didn’t think of the inconsistent dates. But I like my idea more.