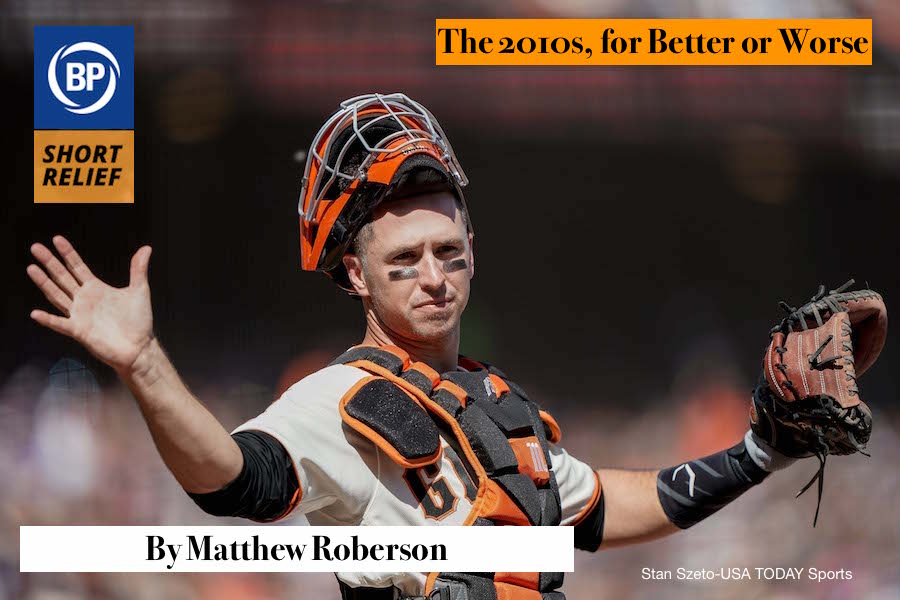 The 2010s, for better or worse, was a decade of sweeping sea changes that will forever alter the course of history. The Internet went from a fun hobby to the unfortunate lifeblood of society, enormous political shifts rocked multiple countries, and climate change, much like MLB pitchers, experienced a massive increase in speed and power.

When thinking about the baseball of this decade, the closest thing to a dynasty was the Giants, who will be remembered more for being excruciatingly lucky and playing above their collective talent level than for possessing the omnipotent qualities we come to expect of three-time champs. Perhaps it was a little too on the nose for San Francisco’s baseball team to mirror the city’s biggest industry and disrupt the conventional idea of success, or maybe it was just the best example of synergy the universe has ever produced.

In this topsy turvy decade, there’s comfort in things that just make sense. Mike Trout looks, acts, plays, and probably smells exactly how you’d expect a dominant baseball player to. The Trout archetype would pulverize any era of baseball, and the 2010s model did exactly that. By some metrics, the best non-Trout player of the decade was Buster Posey, he of the extreme normalcy. If you told me Buster Posey’s favorite song of the 2010s was “singing”, I’d ask who introduced him to words in the first place. Seriously, close your eyes and imagine what Buster Posey’s speaking voice sounds like. The best NL player of the decade saw all the technological innovations around him and chose to stay on silent mode for 10 years. I guess “stick to sports” was another prevailing mantra of the decade, and he nailed that one as well.

Like the planet it inhabits, most of the conversation around baseball in the 2010s warned of its imminent death. The youth sided with football’s symphonic violence and basketball’s artful expression, leaving baseball to grapple with its own mortality. This conversation endured despite the sport experiencing a thrilling wave of unique players.

First Chris Davis, then Giancarlo Stanton, then Aaron Judge brought punishing, imposing styles that the game hadn’t seen since deciding that steroids were bad. The latter two even ended up on the same team, only to be defeated by the shortest superstar of the modern age. The seventh-best pitcher on every team started throwing 99 and computers won the never-ending battle between man and machine, creating a period high in walks, low in stolen bases, and obscenely packed with home runs.

The Cubs won more championships than the Yankees, two players won the Cy Young with 13 or fewer wins, and Nick Markakis finished second in hits while making just one All-Star team. It was the best of times, it was the worst of times, and we have to keep going. As The 1975 — ironically one of the most 2010s bands there is — sang, “The war has been incited and guess what? You’re all invited.” 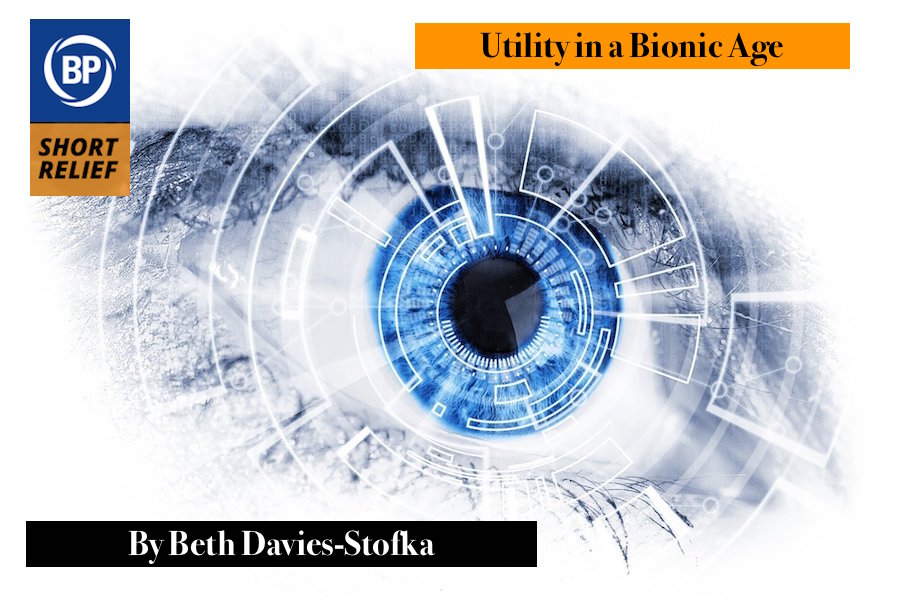 Future Me: You spent your entire career as a utility player, which is very unusual given the rarity of utility players back then. Can you help our readers understand a bit more about how baseball was played eighty years ago?

Future Retired Player: Well [laughs and clears throat], eighty years ago, most players made the majors due to technological augmentation, you know, bionic arms and eyes. The competition between hitter and batter was a marvel to behold. Not only could the pitchers command both sides, they could vary their speeds between 100 and 200 miles per hour. The hitters could see perfectly, and they were strong. And so fast. Average bat speeds around 165. They had to adjust the parks for it. Colossal. Players had longer careers, too, since the bionics were self-healing and could grow along with the body. They could start really young.

FM: So how did you wind up as a utility player? Seems like a bionically-enhanced player could claim any spot on any roster.

FRP: That’s if you could afford the tech. Some of us couldn’t, so we played off the bench.

FM: What was the role of the utility player?

FRP: The thing is, those bionics created incredibly specialized players. They were either great hitters or great pitchers. Some of them did both — if they had the mentality — but most of them only liked doing one thing. I heard pitchers had always been like that, but by my time, even position players limited themselves. They only liked to hit so they rarely practiced their positions. Players like me looked at the game different. We wanted to do it all.

FM: But if teams had bionic talent, how did utility players get into the games?

FRP: The bionic players were vulnerable. Remember, eighty years ago, they only had bionic eyes and arms. So they threw at each other a lot. They mostly took out eyes, and if a robot ump said anything they smashed it to bits.

FRP: It was! And once somebody broke your arm or put out your eye, you would need a couple of innings to heal. That’s where players like me came in. Every team needed to fill a slot or two with players who could play all over. If you had that mentality, you had a lot of chances to play. No one threw at us, you see. That was an unwritten rule. You don’t hit a defenseless player.

FM: Were you able to make a living, playing against all those billionaires with bionic body parts?

FRP: Are you kidding? We were the highest paid! Utility guys were necessary, and we were rare. Supply and demand, kiddo.

FM: I wish I could see a game played by actual humans. That must have been killer.

FRP: A bunch of us get up a game most evenings on Level 19. See you tonight? 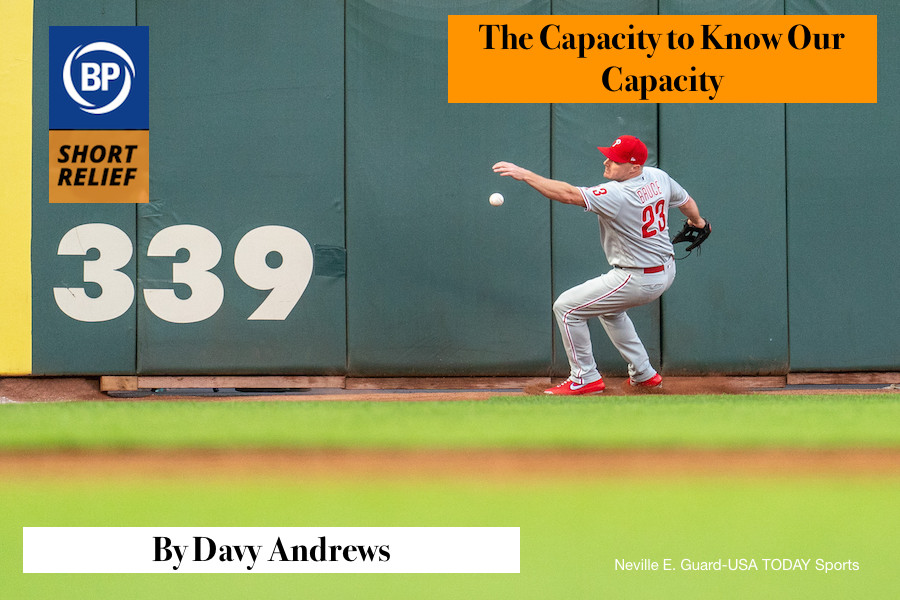 Spring training is just around the corner. Well, it’s just a few months around the corner. Ok, it’s impossibly far away and, let’s face it, by the time pitchers and catchers report 90 days from now, not all of us will be around. Some of us will be dead. The actuarial tables say roughly 670,680 Americans will die between today and February 11th. So probably one of us.

“I’m a big believer in analytics,” Jay Bruce said recently. “I’m an advocate of gathering information and using it to make myself better.”

For the next three months — likely your last — ballplayers will dedicate themselves to self-improvement. Come February they’ll descend upon Florida and Arizona with tales of reinvention. I locked myself in a tunnel with a high-speed camera and a crate of protein bars and now my slider is the actual, literal devil. I prostrated myself before a hitting guru on a mountaintop, sustained only by snowmelt and thermals, and now I break out in hives at the mere mention of a ground ball. I am more physically fit now than ever I was before.

We want these stories to be true. From the Odyssey to Robinson Crusoe to Apollo 13, humans have always been captivated by resourcefulness. It’s heartwarming to watch someone finally figure things out, to see diligence and creativity rewarded. Justin Turner learns to put the ball in the air, Marcus Semien to pluck it from the ground, and we admire two bright new stars, wondering who’s next.

The danger is in assuming that such drastic improvement is possible for everyone. We wonder why our utility infielder hasn’t put in the effort to succeed too, ignoring the possibility that he’s already done just that — he has already wrung from himself every last drop of intelligence and skill and exertion just to get to the point where he can hang onto a roster spot by his fingernails.

That Jay Bruce quote has a second part: “That said, you can’t just take information and mold yourself into a player you thought up in your head. For the most part, you are the player that you are.”

There is only so much about ourselves that we can change. According to Statcast Wilson Ramos has the 564th highest sprint speed in baseball. Even if he spends the next three months training with Usain Bolt, when he arrives in Port St. Lucie next year he’s still going to be roughly as fast as a bag of potting soil.

Knowing your limitations is important, if only because it can keep you from looking like an idiot. If Wilson Ramos were to announce next year that he’d spent the winter improving his footspeed, few of us would applaud. We’d wonder why he didn’t work on his receiving. We’d wonder if something had gone wrong; you know, with his brain.

But the bigger danger is in limiting ourselves. How can we know our capacity if we never stretch ourselves to the breaking point? And how do we know that, having learned from one failure, we won’t succeed the next time?

It can be instructive to remember how we started. Take a look at the oldest picture you have of yourself. Maybe it’s even from the day you were born. You might look cute. You probably look raw and squishy, vulnerable. There probably aren’t many hints as to what you would become, what you could become. A newborn baby looks less like a bundle of raw potential and more like a deflated possum. And yet, everyone who’s ever achieved anything, from Odysseus to Jim Lovell to Marcus Semien, started out the same way. So why not dream big? Why not find out how far your limits can be pushed? Besides, you’ll probably be dead soon anyway.