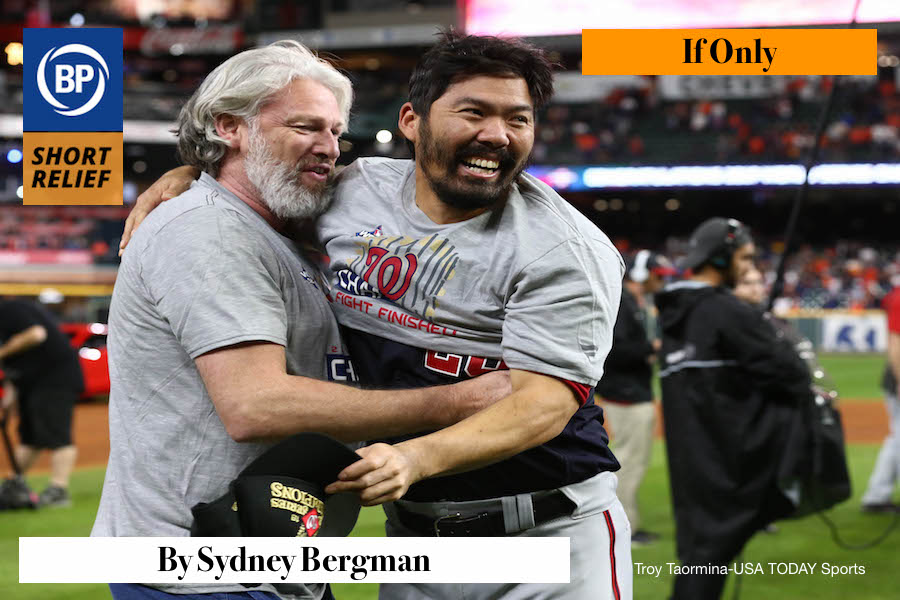 Kurt Suzuki remade himself late in his career — a defensive catcher suddenly turned offensive, posting the kind of average, especially with RISP, we generally can’t expect from a glove-over-bat player. During his last stint with the Nationals — acquired with battery-mate Gio Gonzalez in a trade with Oakland — he posted decent, but not altogether greater than respectable numbers. He left in 2013, spending three years with the Twins and then two in Atlanta, before his DRC+ improvements netted him a two-year deal with the Nationals last winter. In short, he remade himself at a time when the numbers said he couldn’t. When he was too old to change, he did anyway.

Nothing exemplified the never-say-die attitude of the Nationals than his three-run walk-off homer against the Mets, capping a seven-run bottom of the 9th. A home run the stuff dreams are made of, that legends are woven from. The kind of stuff that says if this isn’t good, I don’t know what is. And then, and then, and then. And then he put on a MAGA hat. Embraced a president whose words and actions hurt, and continue to hurt many, many people.

Baseball is in part a game for suckers and romantics. We hold in our hearts the foolish notion that the guys we’re rooting for are ‘good guys.’ That they do us the courtesy of agreeing with our beliefs — or at least not vehemently disagreeing with them — that their success at baseball on the field translates to moral successes off it. It’s an idealistic thought perhaps, or a delusional one, that rich men who are insulated from consequences by an industry willing to find the upside in violence would somehow defy expectations. That grinding it out every day on the field somehow translates into a willingness to practice difficult things — self-reflection, compassion, change – outside the ballpark. That the hard isn’t just what makes baseball good, but what makes players themselves great.

But analytics tell us past performance is the best predictor of future performance, that people very rarely change, that who someone is tells us who they’re likely to be. That we can reliably predict growth, unfold our statistical roadmaps on if and how and when people change.

Maybe I’m both a sucker and a romantic. I have to believe in the endless capacity for people to change. I’ve spent too long in education not to. I have to believe anyone can be better than who they were before. I have to believe people can grow beyond who their past actions indicate they are. That work, real work, hard work might make them better. The kind of work that comes from a place of reflection, of acknowledgment of hurt, of apology, of – most elusively – change. The kind of work a late-career renaissance hitter could put in, if only he tried. If only he cared enough to try. 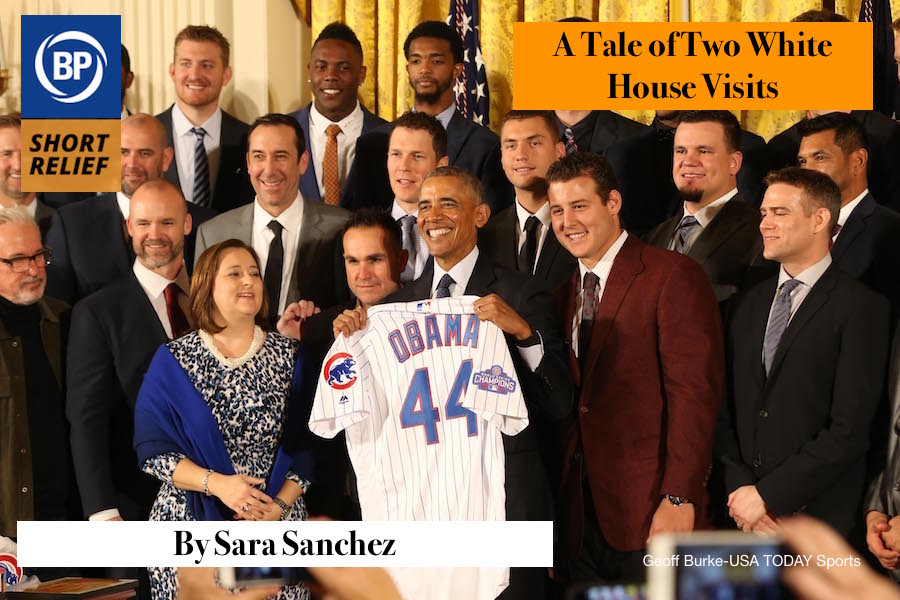 The early 2017 announcement put a knot in my stomach. Just months after the Chicago Cubs had won their first World Series in 108 years, and mere days since I’d taken solace in the fact that their White House visit would be one of Barack Obama’s last acts as President, Donald Trump decided to invite the team for a second get-together.

By 2019 standards the Cubs second White House visit was uneventful, other than the fact that it shouldn’t have existed at all. But it created two stark images of the team I love. In one image was the President I proudly voted for twice eloquently welcoming the team despite being an avid White Sox fan. The other image starred the President I did not vote for, who’d started his campaign saying people who share my last name were rapists and murders. Both images had a few players conspicuously absent from them, but absent in that quiet way athletes used to make political statements in early 2017.

This tradition which is meant to honor championship teams and the office of the President has descended into polarization, just like everything else in American society. The days of sitting out a ceremonial event quietly are over.

What started with the Cubs second visit has only gotten worse. First there was the White House decision to serve fast food to the National Champion Clemson Tigers during the government shutdown. Next came feuds with the NBA’s Golden State Warriors and the Women’s National Soccer Team, leading star players to preemptively decline invitations to D.C. As a country we just accept the escalating cultural war between sports stars and Trump as business as usual. They get drowned out in a matter of days, sometimes hours, by the never ending churn of bizarre news coming out of 1600 Pennsylvania Avenue.

The Nationals team visit to the White House was no different. Sean Doolittle publicly declined to attend, citing the President’s divisive rhetoric — specifically derogatory comments towards refugees and people with disabilities — as the reason he just couldn’t “hang out with” Trump. Ultimately seven of his teammates also said with their lack of attendance they would rather be elsewhere.

I have to wonder what they thought as they saw Kurt Suzuki put a “Make America Great Again” hat on his head as the President spontaneously embraced him from behind. Or their reaction to Ryan Zimmerman, the face of the franchise, handing Trump a white Nationals jersey with the number 45 on it as he thanked Trump for “continuing to make America the greatest country to live in in the world.”

This is a close Nationals team, and I imagine they will be fine. They repeatedly credited their team chemistry with helping them triumph over the 106-win Dodgers and the 107-win Astros. During their World Series parade, MASN announcers talked about their team dinner in Miami at pitcher Aníbal Sánchez’s home as a turning point in their season, which started off with a 19-31 record. In an MLB Network interview following their Game 7 win, Max Scherzer specifically credited Latino culture in bringing them together (I was going to write about that until yesterday’s events. Alas.)

It may be harder for fans. After all, this fanbase greeted the President with deafening boos and chants of “lock him up” in Game 5. These same fans will now need to face images of some of their favorite players I’m sure many would rather forget. 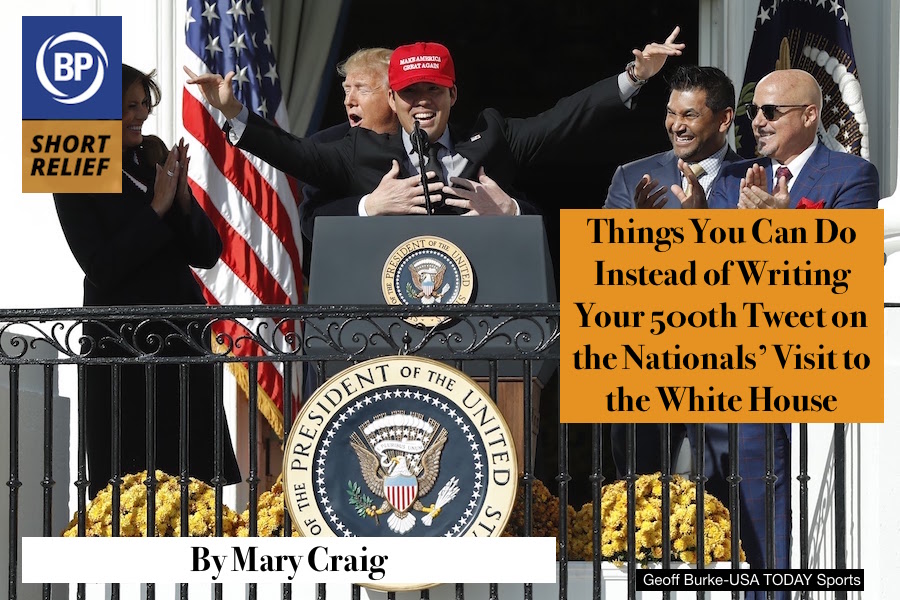 Look, yet another sports team going to the White House isn’t great news, and Kurt Suzuki donning a MAGA hat and being felt up (????) by Trump is a particularly grim affair. However, as tempting as it may be to make 5,000 tweets about the entire ordeal, I am here to tell you that you should be kinder to yourself than to risk your mental health on a 50-tweet thread calling out Office Respecters for their asinine opinions. Your time is more valuable than that. You are more valuable than that.

Instead, you should consider engaging in more mentally and physically constructive activities. For your convenience, I have provided the following list of such activities which I strongly urge you to consider:

Do I actually think you’ll manage to resist tweeting about the White House visit? Of course not. It would be both naive and hypocritical of me to assume so. But we all need a break from Twitter at some point, and when you’re ready for yours, this list will be here for you.

You need to be logged in to comment. Login or Subscribe
natsfandc
Thans for writing this! For those interested in further venting frustration with Suzuki and Zimmerman, here’s a petition asking them to apologize for praising a president that demeans their city and teammates: http://chng.it/f8WLh9bz
Reply to natsfandc
newsense
I despise Trump and I'm proud of the Nats who didn't go but I can't blame the ones who went for not wanting to spoil their moment and pretending this was a normal White House Visit with a normal President
Reply to newsense