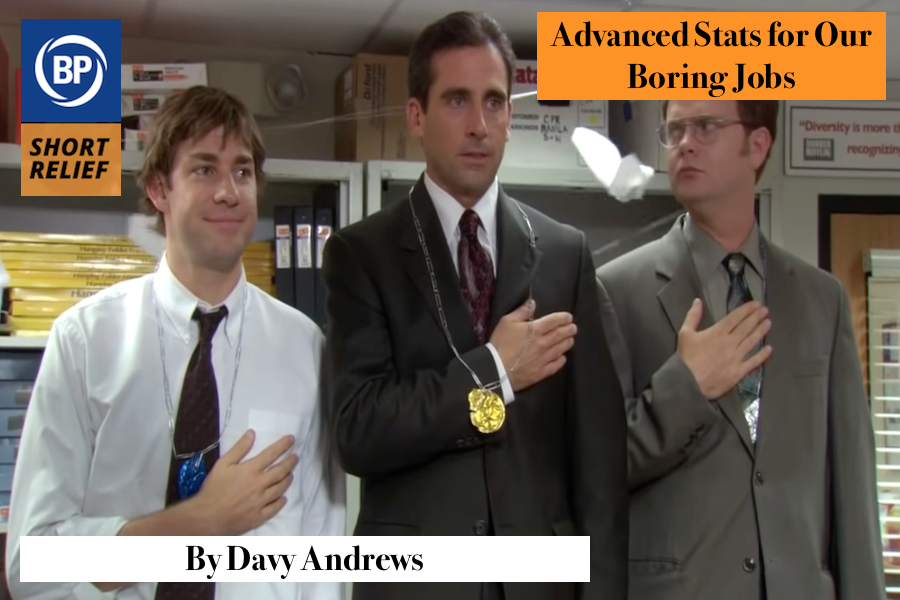 But there are probably more similarities than we realize. I would bet that most clubhouses contain a Keurig machine, and, further, that once a week some innings eater on a rookie contract gets annoyed because none of the established stars ever deigns to empty the repository for spent K-cups and just because he’s on a minimum salary doesn’t mean he’s everybody’s butler and who does that slob Daniel Murphy think he is anyway?

I wish your office and my office had batting cages. I wish we had walk-up music. Most of all, I wish your job and my job had advanced metrics. So far as I know, Voros McCracken has written nothing about us. So I have taken the matter into my own hands. Behold: Advanced Stats for Our Boring Jobs. I will be your Voros McCracken.

BB: Brownies Baked is a simple counting stat. Did you bring brownies for everyone? Congratulations, you are good at your job.

BAPIP: Brownies Above Proportion Ingested Personally. We need to use standard deviations here. If your office has two employees and you ate all the brownies, you are basically a thief. If you have 100 coworkers, some are probably dieting. Or vegan. Gluten free. Dairy free. On a juice cleanse. Ok, I have lived in New York for too long. The point is the bigger your office, the more leeway you have to house all the brownies when no one is looking.

PLOP Rate: Pages Left on Printer. Why did you print it if you don’t need it? It’s a communal printer, Greg.

ERA: Email Related Atrocities. Did you email what you want for lunch at the company picnic to 300 people? Write six paragraphs about a phantom attachment? Did you have to go into your sent folder to forward an email to Betsy because you forgot to CC her in the first place? You’re going to get hosed in arbitration.

WPA: Weekend Plans Asked About. “Me? Just taking it easy. What about you?”

JCMI: Jams Cleared Minus Ignored: It is important to weight these. Did you clear a paper jam? You just raised your wJCMI a couple points! Did you ignore a jam and keep on walking to the bathroom? Guess what? Your wJCMI just imploded, and you’re lucky I can’t fire you, because I would totally fire you. I am Voros McCracken and I am drunk with power.

BAPE: Boring Anecdotes Politely Endured. You’re probably not that interested in what Bill’s daughter wants to be for Halloween. But did it brighten Bill’s day just a little bit to tell you about it? Then have some BAPE points or units or whatever.

PLOP Rate: How could we only have one PLOP rate? Pungent Lunches Openly Polished Off. Is that a tuna sandwich I smell? Please clear out your desk. 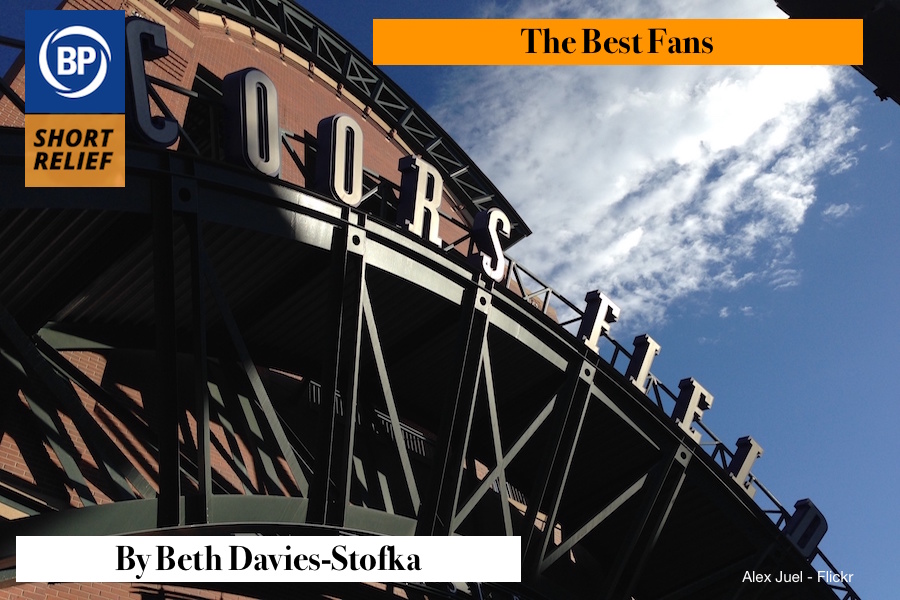 This week, I completed mandatory training on unlawful discrimination and harassment in the workplace. Key to understanding unlawful discrimination is the concept of “protected classes.” Protected classes are generally understood to be race, color, national origin, religion, sex, age, or disability, although the concept is growing increasingly sophisticated, such as genetic profile.

I have had some version of these training sessions for over ten years. They are always necessary, but rarely are they fun. This year was an exception. The trainings included cleverly-written skits performed by professional actors, and delved into the ethics of discrimination and harassment, along with demonstrating the positive benefits that appear in a non-discriminatory workplace, e.g., higher employee morale.

Suppose I only hired Cardinals fans. I think it would create a generally respectful environment of loyal employees, willing to navigate tough times with a “we’ll get ‘em next year” kind of attitude. Or not. What if I only hired Padres fans? We’d have fun all day. A workplace with only Cubs fans? Perhaps there would be a little too much partying. How about Giants fans? Great productivity, since they know they’re pretty great.

How about if I decided to go with Pirates fans? We might have trouble with absenteeism. Same with Red Sox fans, although for different reasons. If I only hired Red Sox fans, I would have fiercely proud and loyal employees, but would they miss a game? No! They might be off world half the year. What if I went with Yankees fans? They’d bring passion to their work, but they might yell at me a lot. Phillies fans might throw things at me.

I am…most certainly stereotyping. But the training told me not to do that, so I’ll just focus on hiring Rockies fans. Have you been to a game at Coors Field? I love it there. Rockies fans are really chill. They are friendly, easygoing people with an innate sense that it’s the journey, not the destination. This would benefit me personally, because my morale would be very *Groucho Marx eyebrow wiggle*. Let’s all work in Colorado. 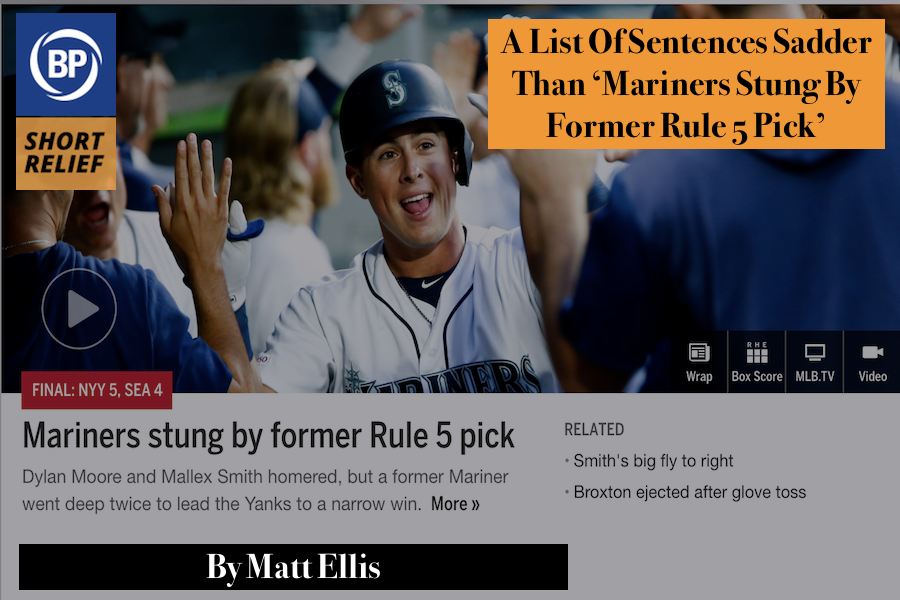 We are looking into dynamic pricing for our beers at the Hit it Here Cafe this season™.

Six players have produced more negative fWAR for the Seattle Mariners this season than Ichiro
Suzuki.

Jerry keeps on his computer a schedule of what players will be controlled by our team in what years and that projects where players may end up playing.

Jake Fraley to be the 63rd player used by the Seattle Mariners this season.

You can find your way around by looking for the pink signage.

MLB has announced Keon Broxton has been suspended 2 games for throwing equipment that made contact with an umpire in last night’s game against the Yankees.

Mitch Haniger hits IL with ruptured testicle, is ‘bigger than the baseball team.’

Scott Servais calls to umpires to check for Cory Gearrin’s possibly illegal delivery shortly after his waiver from the Seattle Mariners.

Cory knows the rule and we certainly dived into for a bunch of time while he was here.

The Seattle Mariners should have started this rebuild in 2016.

The Seattle Mariners now own the longest postseason drought in pro American Sports.