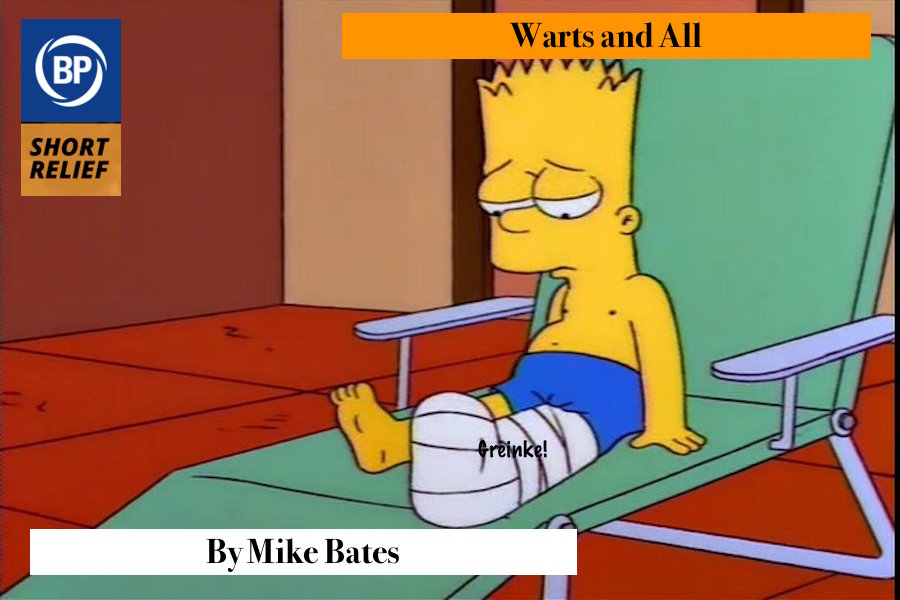 My family put a pool in our backyard when I was in the fourth grade. I was in it almost daily for the next few summers, swimming and hanging out with friends. All the kids in the neighborhood would come by and shoot water guns at each other, play Marco Polo, and dive. The sun both tanned me to a crisp, and with help from the chlorine, blanched my hair several shades lighter. I’ll likely have to answer for that someday, given my family’s history with skin cancer, but it was the 80s, and at the time it was damn good fun.

I’m not sure if this is related, but in the sixth grade I started getting warts on my toes and simply could not get rid of them. First we tried waiting to see if they’d go away. Then we tried over the counter acids. Nothing worked. They kept coming back, bigger and planted deeper. Eventually we saw the dermatologist and had them frozen off with a giant Q-tip dipped in a large canister of liquid nitrogen. It was exceptionally painful, especially the one time I insisted they do it without an anesthetic because I hated the needle they used. I can only imagine how disturbed everyone in the waiting room was by my cries. The warts still showed up on occasion after the treatments, but lessened, until they finally went away around the time I went to high school.

In the immediate aftermath of these treatments, I would not be allowed near the pool while I healed. But my parents were very kind people and allowed those neighborhood kids to still come by and swim even though I wasn’t available to join them. Naturally, being kids, they had a blast without me, laughing and yelling and making a joyous racket. I sat in my bedroom, looking out my window at everyone having fun, and read a book. It was fun in its own way, I guess. I learned about hitchhiking around the galaxy and how to ride a sandworm in the desert and what exactly a historical abstract was, but it was nothing compared to the rapturous noise from just outside my window.

Which is to say, I know how you feel Red Sox and Yankees fans. You thought you were going to have a great summer. You were looking forward to improving your teams so that you could have a shot at another championship. Instead, you had to sit out while the Astros did a frickin’ cannonball and got up the courage to talk to Jason’s cute older sister, who laughed at his dumb jokes while sunbathing on a raft. You’re bitter and angry now, and rightfully so. But don’t worry, you’ll get to swim next year, unless those warts are still there. 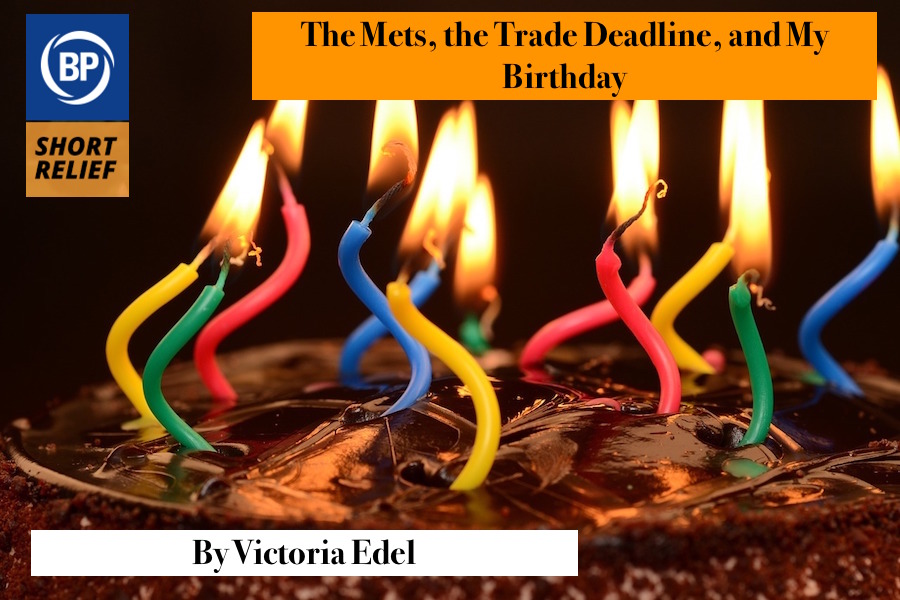 Every year when the Mets schedule comes out, I check who the Mets are playing on my birthday, August 4th. But by the time the big day actually rolls around, I rarely want to attend.

That is my dilemma this year.

In 2016, I saw the Mets beat the Yankees in the Bronx. On the way home, a woman who did not appear sober said to me, “I’m so sad the Yankees lost.” When I explained that I was a Mets fan and the birthday girl, she said it was OK that the Mets won then, since they won for me, and she kissed me on the cheek.

But this is the problem: if the Mets won for me in 2016, that means they have more often than not lost for me. Since my birth, the Mets are 10-13 on August 4th. On the actual date I was born, they lost in 12 innings, which is very Mets. And since 2005, which I would designate as the year I started to pay sustained attention, they’re 4-8. The psychosis of fandom is creating causation between your actions and the results of your team, so of course I want to do this with my birthday.

But in this case, there’s a much more rational explanation for their mid-summer doldrums and my hesitance to sit through any more August 4 games: it’s right after the trade deadline. The Mets deadline maneuvers have been historically…bizarre.

The 2015 Cespedes trade stands out because it was one of the few times the Mets were buying and not selling, or some wild combination of buying, selling, and doing nothing (what they did this year…whew).

Combine the Mets history as sellers with their plague of injuries, and August 4th is neither a day for success, nor for simply seeing your favorite players! In 2017, when I went to Queens to see the Mets get trounced by the Dodgers and their trade deadline acquisition Yu Darvish, my favorite player on the roster, T.J. Rivera, had just been sidelined with an injury. (He has not been seen on a major league field since.)

Should I attend next Monday’s doubleheader against the Marlins (technically August 5th, but I’m off from work), I won’t see Brandon Nimmo or Dominic Smith. (Nor will I see Jason Vargas, but I am okay with that.) They have a season-high six-game winning streak. It is another cruel trick of theirs. They’re lulling me into a false sense of security!

Every year the Mets build a shaky, imperfect team, and by August 4th all the cracks in the foundation have grown into chasms. The fault is not in my birthday, but in the Wilpons. But it still does feel a little bit like my fault. 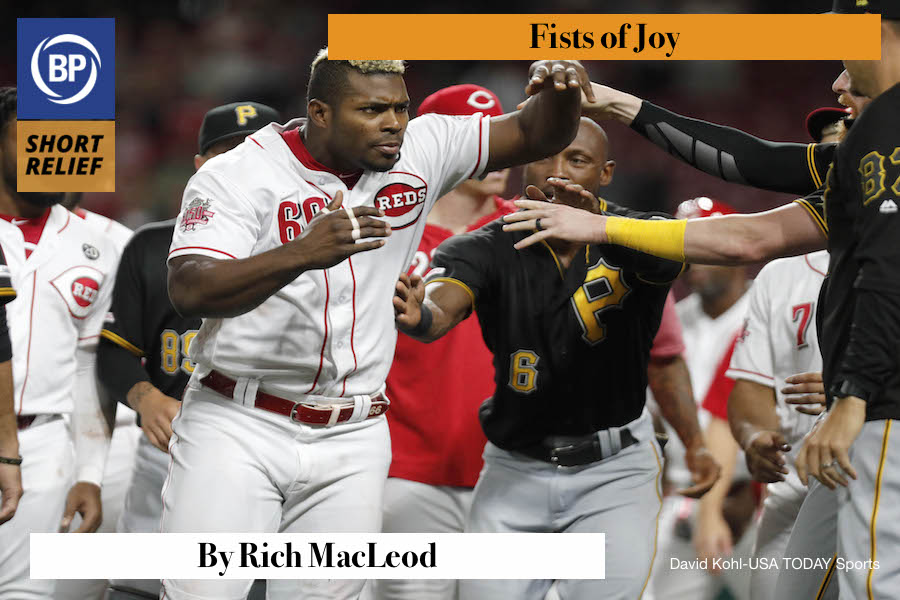 Many of you are already familiar with the story of Wilmer Flores, the man who upon finding out he was being traded away broke down in tears on the baseball field. It was an unusual, emotional, vulnerable night of baseball that resonates in the minds of fans every year come the trade deadline. It was raw. It was real. It was unique. He also didn’t actually wind up getting traded, but that’s neither here nor there.

That’s not why I brought you here (not there), though. No, I’m here to tell you a different story. The premise is similar enough: man gets traded, man gets emotional on a baseball field. But it’s the way this man’s emotions were on display that tell a different story.

This is the story of Yasiel Puig on the night he was traded out of Cincinnati. And on his way, he did not cry. He didn’t shed a single tear, in fact.

Yes, that’s right. Puig, like Flores, was still inexplicably playing for a team that had just traded him away. Unlike Flores, his emotions came out in a… different way.

You see, his (technically) former teammate had decided to take on the entire Pirates roster all at once. This was Puig’s chance. What could they possibly do? He’s already on his way out of town, so the hell with it. Might as well go out with a bang.

And that’s exactly what he did.

The phrase “tears of joy” is one of the well-known variety. There have been documentaries with the same name. Faith Evans even wrote a song about it. But what you probably didn’t know is that there’s actually a similar song about a phrase you’re less familiar with…

You’ve got me so emotional / But when I fight now, they’re all fists of joy

What did you just say? I sing like a gosh darn angel.

No I am not confusing that night with the other 17 Pittsburgh Pirates fights that season.

No, I am not just conflating the neo-renaissance painting at the Museum of 21st Century Donnybrooks and conflating it with a ‘tired narrative.’ I swear this happened! It was weird as hell! It was awesome!

Fine, go back to school. Just don’t trade me to Cleveland.