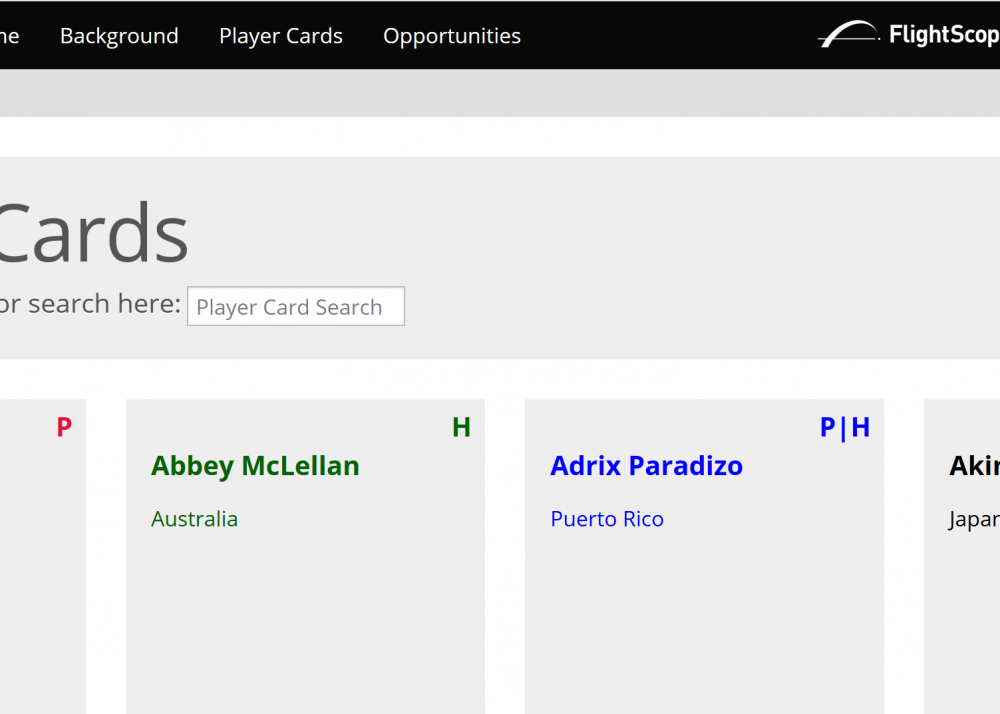 We are happy to share with you the release of Baseball Prospectus’ new women’s baseball pitch and hit data website:

As far as we know, this is the first time that women’s baseball data has been collected in a capacity that is similar to that of the information made available on players in Major League Baseball.

The week of August 22-31, 2018, ten teams from around the world gathered for the 8th edition of the Women’s Baseball World Cup. The tournament is currently the highest level of women’s international baseball, with teams competing in hopes of winning a gold medal. The tournament consisted of 50 seven-inning games through three rounds of tournament play. More information about the tournament is available at the World Baseball Softball Confederation website.

All of the games are available to watch on YouTube. I highly recommend watching the bronze medal game between USA and Canada; a back and forth game that give you a taste of excellent pitching, offensive power, and finishes with extra innings.

This year’s edition of the US Women’s Baseball National Team featured a strong roster of women from across the country. Among the players were Kelsie Whitmore, Stacey Piagno, and Anna Kimbrell who have all made appearances playing for the Sonoma Stompers. Stacy Piagno is the first and only woman to record a win in professional baseball in the United States. Megan Baltzell, a power hitter who played Division I softball at Longwood University, hit two home runs in the tournament.

Dominican Republic made their first appearance in the Women’s Baseball World Cup in 2018 lead by José Canó, father of Robinson Canó. The team showed power at the plate and sound fielding. I expect Dominican Republic to continue to roster players that are competitive on the international women’s baseball stage and become a tough opponent to beat in future editions of the tournament.

The Japanese team has taken home six consecutive gold medals and has won 30 games in a row, a streak that spans four editions of the World Cup. They have won every matchup since losing to the US in an early round in 2012, where Japan later beat USA in the final game to win the gold medal. Japan dominates on the international stage largely due to the fact that the Japanese roster consists of women who play professionally in the Japan Professional Women’s Baseball League, the only women’s professional league that is currently in existence. Japan, lead by their ace pitcher Ayami Sato and their expertise in small ball, continued their streak and they took home the gold medal again in 2018.

This year the tournament was a little bit different. The USSSA Space Coast facilities where the tournament was played has Flightscope radar tracking units installed at their fields. This is a similar device to the Trackman radar system that has made the information provided by Statcast for MLB possible.

We have put together this site which looks very similar to the Brooks Baseball site for you to explore women’s baseball in a new way that until now hasn’t been possible. Under the Player Card tab you can search for data associated with any player who played in the tournament. For pitchers, you can look at their data in the form of charts and graphs for pitch velocity, spin rate, pitch movement, and pitch usage. For hitters, you can look at information such as exit velocity, launch angle, swing rates, and the other standard information you’ve come to expect from any cutting edge, analytical website.

Maybe you saw the Pitching Ninja gif of Brittney Hepburn, pitcher for Australia, and wanted to check out her pitching profile. Now you can. 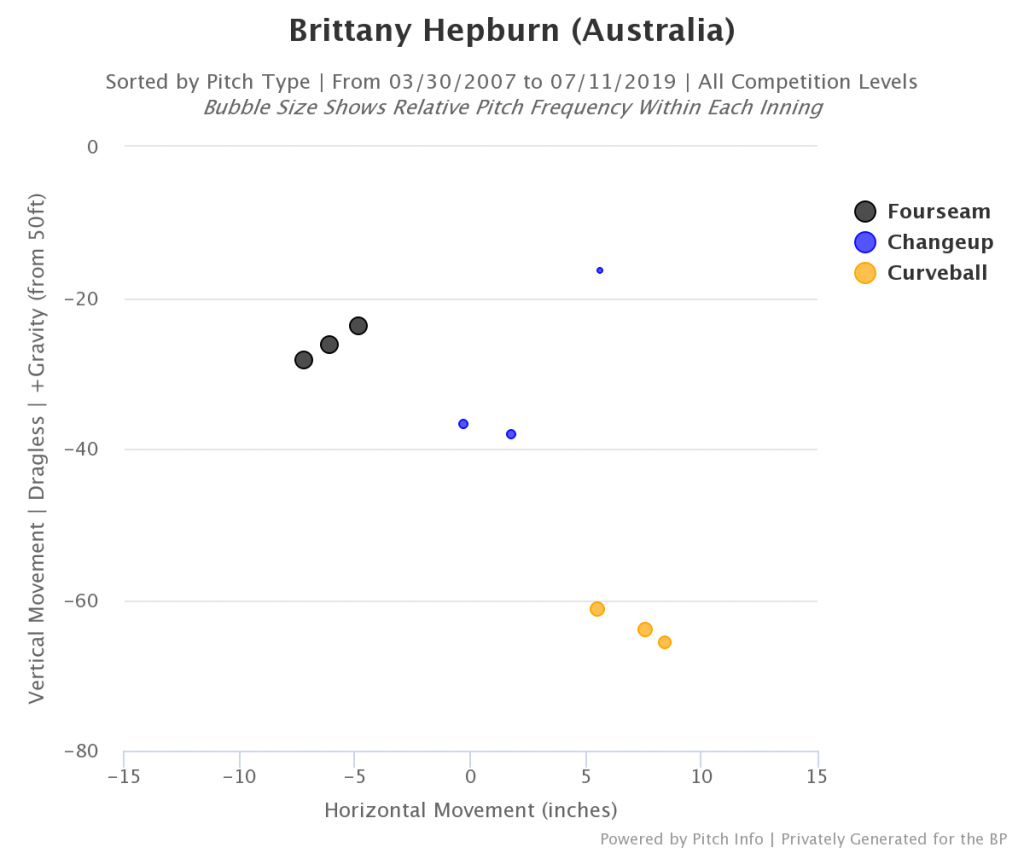 The data provided comes from the Flightscope radar unit installed in Viera. The system used provides fantastic tracking on pitches and batted balls. For batted balls, the familiar exit velocity, launch angle, and spray angle are provided. We found no substantial issues when working with and reviewing that data. The pitching data provides velocity, spin rate, along with the normal location (release and plate) and movement information. We did find the highest quality data from the pitches came from the speed and spin rate outputs, but the pitch-to-pitch variance in the location and movement data indicates it is better used in aggregate. As a result, we do provide spin and speed at the pitch level, but we chose to aggregate the movement and location data in the presentation. You can find less-aggregated data in our zone profiles, which you should note are based on our best estimates of the player strike zones. Those are based on the height data provided by WBSC and cross-referenced to MLB data for estimation of zone size. The average WBWC player is about the height of David Eckstein, for reference.

Many thanks to Dan Brooks for helping us with the framework for the site as well helping us to make the changes and adaptations that were needed to put this together.

Special thanks to WBSC, Flightscope, and USSSA Space Coast for working together to make this possible by providing the infrastructure to make collecting this data possible.

Thanks to Harry Pavlidis and Kate Morrison for helping me get the data in shape to be as correct as possible and usable for the site.

Thanks Jen Mac Ramos, Rob McQuown, and Kendall Guillemette for putting in the work necessary to make the website look nice and work properly.

Most importantly, thank you to Harry, Kate, Jen, Sean O’Rourke, Kendall, Martin Alonso, and all the others at BP stats who spent time watching the tournament with me and allowing for women’s baseball to be normal among a group that spends a lot of time talking about the best baseball players in the game. I can’t wait until we can do the same next year.