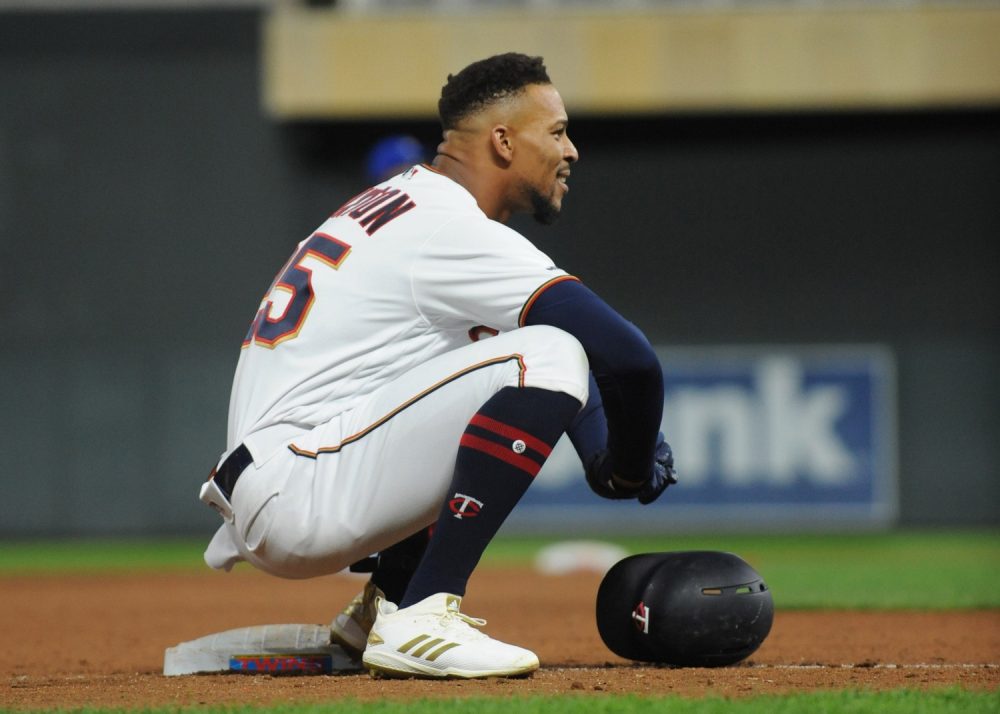 Byron Buxton is the fastest player in baseball. Here is the top sprint speed (feet/second) in MLB each season since the Statcast metric was introduced in 2015 (minimum 25 competitive runs):

Some fast players are still mediocre defensively or poor base-stealers, but Buxton is also elite at turning his MLB-best speed into actual on-field value. Buxton has been worth +20 Fielding Runs Above Average per 150 games for his career, including +5.8 FRAA already this year, and his career stolen base percentage of 88.5 is the best in baseball history among players with more than 50 steals. He’s incredibly fast, and he uses that speed to be incredibly good in center field and on the bases.

One thing he does not do, however, is steal third base. Like … ever.

Buxton has stolen 54 bases in his career, including eight already this season, and every single one of them has been second base. He is 54-for-60 stealing second base and 0-for-1 stealing third base, with his lone attempt coming on July 26, 2016 against the Braves. Atlanta’s catcher that day? Weak-armed longtime Twins catcher A.J. Pierzynski, who was in his final season at age 39 and threw out just 23 percent of steal attempts other than Buxton.

Since being thrown out by Pierzynski that day, Buxton is 45-for-49 (91.8 percent) stealing bases, all of them second base. He’s played 240 games without so much as attempting to steal third base.

Brian Roberts, one of the all-time best stealers of third base (more on that shortly), once explained the difference in a way that always stuck with me:

For the guys who can’t outrun the ball … it is so much easier to steal third because you can get so much more of a lead. Ninety percent of the pitchers are quicker to the plate when there’s a runner on first than on second. You always see a pitcher slide-step with a runner on first, but a lot of times you don’t see the sign for the slide-step with a runner at second. Pitchers don’t pay as much attention to a runner at second.

Buxton, of course, very much can outrun the ball. There’s a certain logic in Buxton never trying for third base, because he can score from second base on any single that leaves the infield anyway. On the other hand, at third base he can also score on any ground ball, any fly ball, and any ball that gets away from the catcher, all while putting extra pressure on the pitcher and the defense. Getting from second base to third base is still valuable, and you’d think someone with Buxton’s speed and ability to steal second base would be amazing at it. Instead, he’s nothing at it.

And it’s not just Buxton. As a team, the Twins have attempted to steal third base just 28 times since 2015, compared to an average of 67 attempts for the other 29 teams. Minnesota has successfully swiped third base 82.1 percent of the time, which is even better than the MLB-wide mark of 77.3 percent, but like Buxton they shy away from even trying it. Minnesota has yet to attempt a steal of third base in 38 games this season and 95 percent of the Twins’ steal attempts since 2015 are of second base.

Rickey Henderson is, not surprisingly, the MLB leader in steals of third base since 1950, by a wide margin. 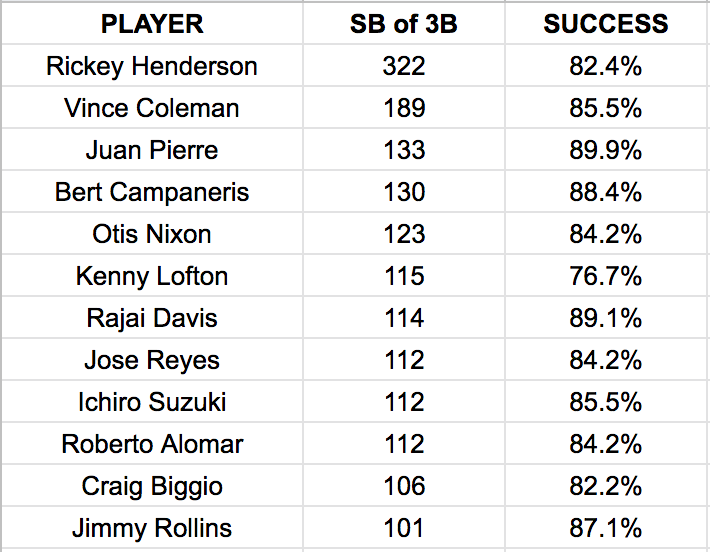 Those are the only 12 players since 1950 to steal third base at least 100 times, and all of them except for Kenny Lofton did so with a success rate above 82 percent. Henderson has exactly as many steals of third base (322) as second-ranked Vince Coleman (189) and third-ranked Juan Pierre (133), combined. However, for Henderson those 322 steals of third base represent “only” 22.9 percent of his career steals, which isn’t a particularly high rate.

Here are the dozen players since 1950 with the highest share of their career steals being of third base (minimum 20 attempted steals of third base). 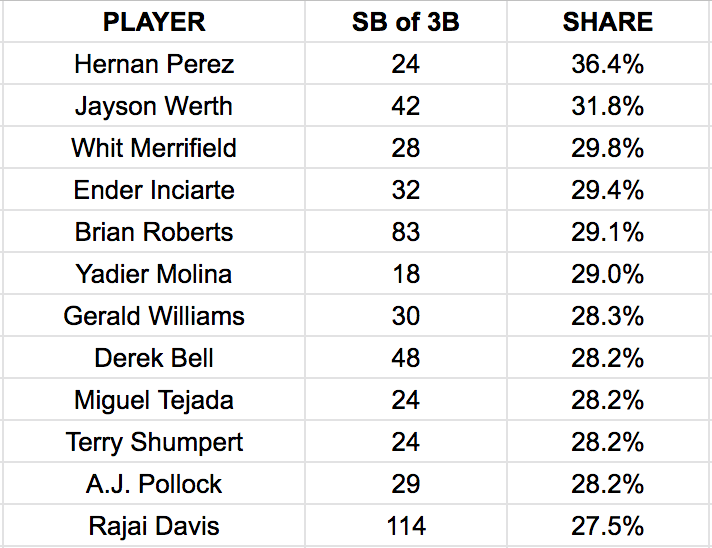 There are some high-volume base-stealers and outrun-the-ball types on that list, like Rajai Davis and the aforementioned Brian Roberts, but there are also lots of names no one ever associates with stealing bases or even being fast, like Yadier Molina and Miguel Tejada. And their success rates are a mixed bag, with Hernan Perez, Whit Merrifield, Roberts, and Davis swiping third base safely at least 88 percent of the time, compared to Ender Inciarte, Gerald Williams, Molina, and Tejada under 78 percent.

Here are the dozen players since 1950 with the highest success rate when stealing third base (minimum 20 attempts). 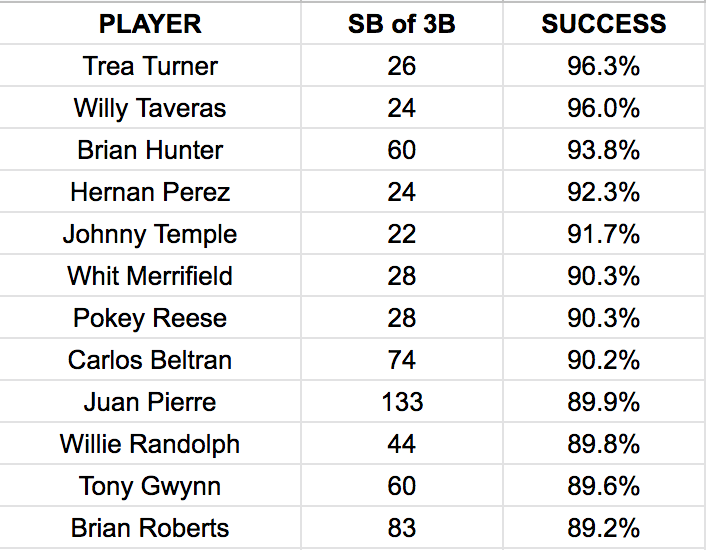 These are nearly all players known for being speedsters. Honorable mentions to Ron Gant (18), Josh Reddick (15), Curtis Granderson (14), and Keith Miller (12) for having the most steals of third base since 1950 without being caught. At the other end of the spectrum, Paul O’Neill went 12-for-25 (48.0 percent) stealing third base, which is the lowest success rate since 1950 among players with at least 20 tries. 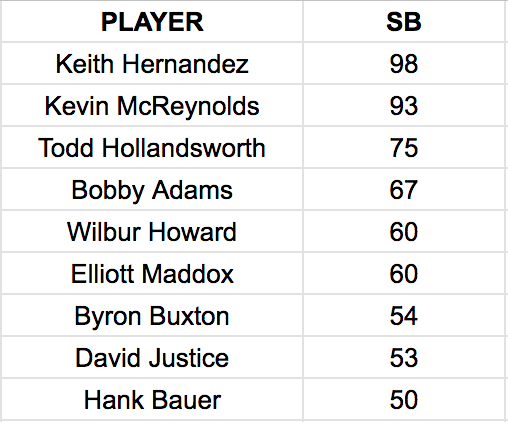 All but one tried to steal third base five or fewer times. Keith Hernandez is the outlier, going 0-for-6. (Elaine Benes should have replied “you don’t know anything about stealing third base.”) And that fits with the rest of his career, as Hernandez also attempted 154 steals of second base and was successful on just 62.9 percent. He ran not because he was fast, but because his 20s were spent on a Cardinals team filled with speedsters, playing for running-obsessed manager Whitey Herzog. Hernandez tried 30 steals in his final Cardinals season and then tried a total of 36 over the next eight seasons.

Buxton is different than the other players on the above list, in that he’s actually an elite base-stealer. Injuries and a .290 career on-base percentage have limited his base-stealing opportunities so far, but he’s still just 25 years old and certainly capable of swiping 30-40 bases per season. Let’s assume, if only for the sake of curiosity, that Buxton will total more than 200 steals for his career, and compare him to that group instead.

Here are the dozen players since 1950 with the lowest share of their career steals being of third base (minimum 200 total steals). 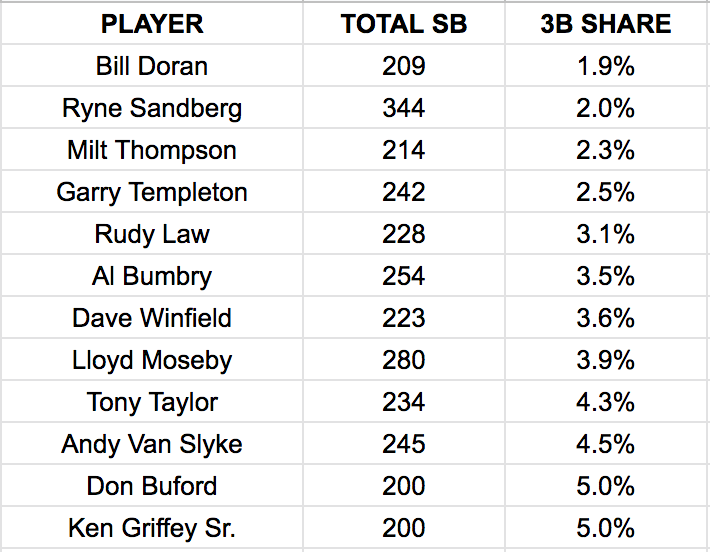 If you have higher hopes for Buxton and think he’ll wind up stealing 400 bases, here’s the same list but for players since 1950 with at least 400 steals. 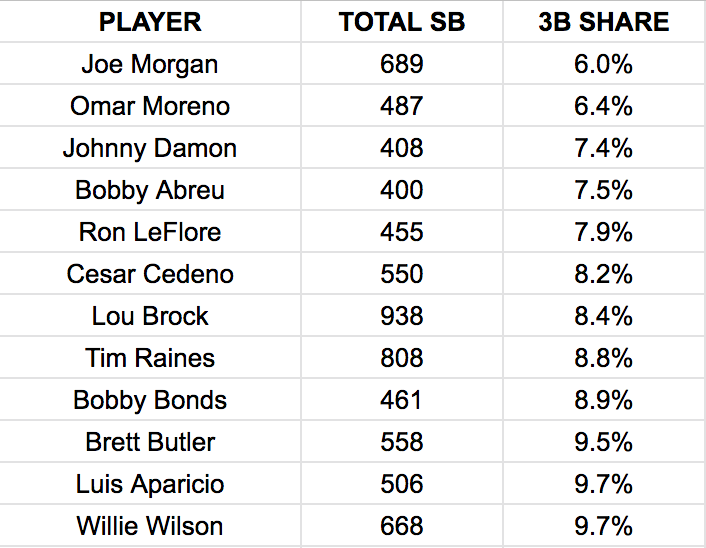 In topping the above list, Joe Morgan stole third base 41 times. Buxton has attempted to steal third base once. All of which is a very long way of saying that no high-volume base-stealer has ever been as averse to stealing third base as Buxton.

Thanks to Rob McQuown and the BP stats team for research help.

You need to be logged in to comment. Login or Subscribe
John Collins
That was fascinating; I had no idea. Someone should ask Buxton or Baldelli why this is.
Reply to John
John Collins
They just mentioned this stat on the Twins telecast.
Reply to John
Greg Simons
Elaine was completely right about the third-base coach not waiving Hernandez in.
Reply to Greg