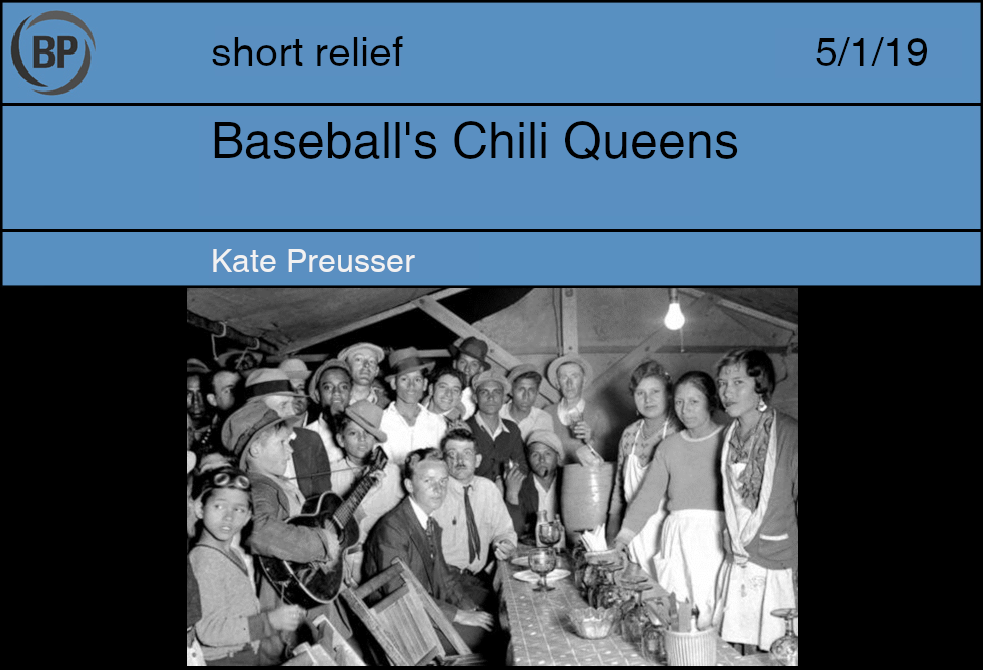 Baseball has been played professionally in San Antonio since at least the late 1880s, when the city was a charter member of the Texas League. The history of chili in the city is much harder to trace, with many travelers coyly referring to “stews” that will “make one malodorous for days,” as one lady traveler sniffed, but most agree that the dish was popularized around the same time baseball came to San Antonio by San Antonio’s “Chili Queens,” women who came to the city’s plazas at twilight with wagons full of homemade chili, the earliest food trucks.

The plazas were filled by day with San Antonio’s diverse mix of soldiers, ranchers, and merchants, the wealthy and poor alike conducting business. At night, when the chili wagons wheeled in, genteel lady tourists dressed in fine silks would sit elbow-to-elbow with blacksmiths and butchers at the long communal tables in the plaza, where they might also rub elbows with baseball players fresh from the day’s game over at Muth’s Park near Government Hill. The Chili Queens served them all, filling bellies on the cheap with food that Stephen Crane described as “pounded fire-brick from Hades.”

By the 1930s, the number of Chili Queens was dwindling as city life moved further from the plazas and urbanization took hold. And in the 1940s, the city’s health board cracked down on the few remaining Chili Queens, shuttering the stands for good. Baseball, on the other hand, continued undeterred, in fact enjoying a post-war renaissance and a new affiliation with the St. Louis Browns, and hasn’t left San Antonio since. This year, in fact, the formerly Double-A Missions will enjoy a promotion to Triple-A, as they welcome the Colorado Rockies as new affiliates. The former San Antonio Missions will relocate to Amarillo to become the Sod Poodles; here the name, like the mission to which it refers, will endure.

Three hours down I-10 in Houston, this year the Astros will feature a Frito-crusted corn dog topped with “Texas chili.” No credit is given to San Antonio as the progenitor, nor to the Chili Queens who first served it to the multitudes, who are not granted the institutional memory afforded to a baseball team. Maybe, in this case, that’s just as well, as the Chili Queens might not recognize their cultural birthright in this particular incarnation: single-serving, overpriced, and Frito-crusted. 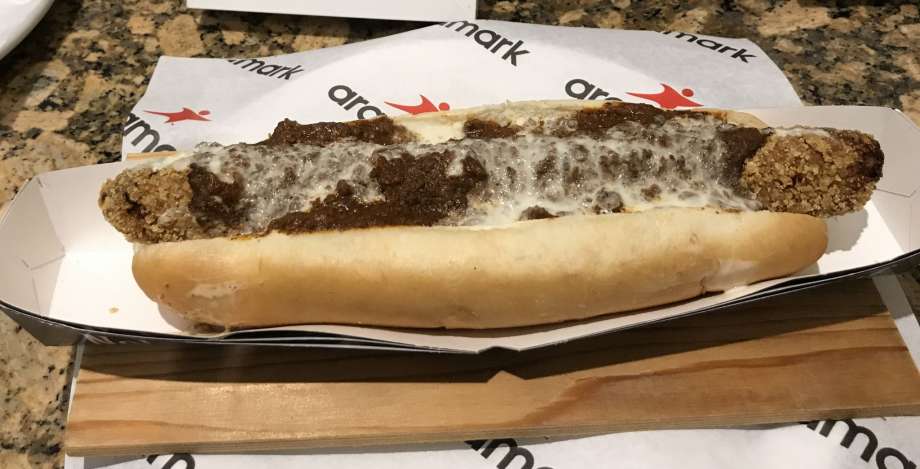 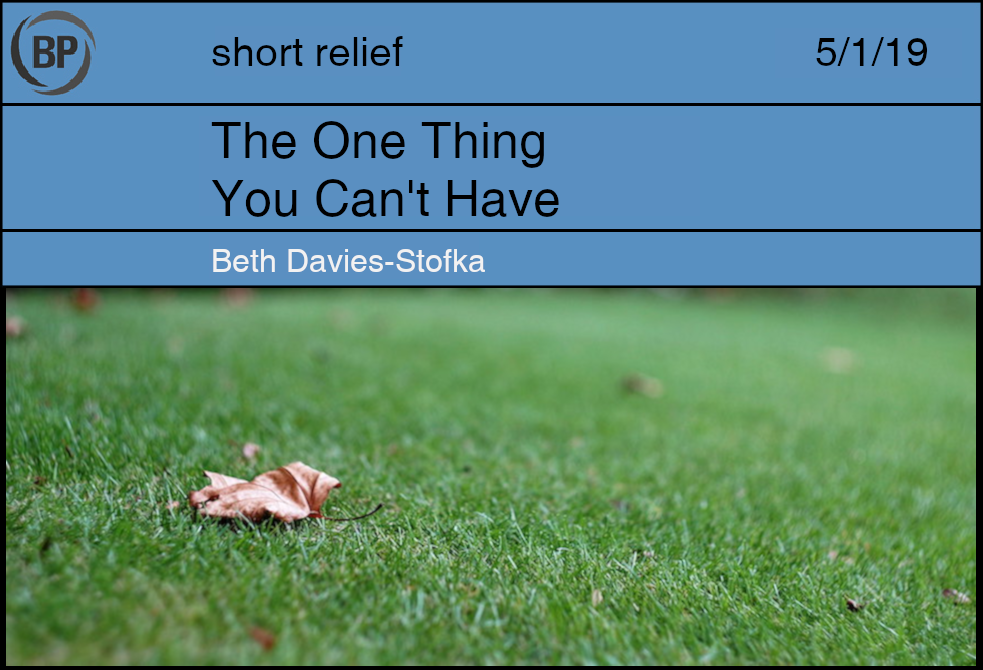 Jerry sits on the cold bench and stares at the scarred glove in his hands, ignoring the papers next to him. A passing teammate’s equipment bag knocks them to the floor, so Jerry pushes them together and puts them back on the bench. The one on the top bubbles with energy but Jerry ignores it. “This is awesome!” it says. “Five years, $70 million!” Jerry stares harder at the glove. “I know I shouldn’t brag about money, Dad, but I have to tell you. We literally worked my entire life for this.” Jerry shuts it out. He doesn’t want to hear it.

But it continues to tug at him. This unsent letter wants to be seen. It wants it so much. It wants to be read over and over, spreading its joy into every room of a home that is now too far away. “I’m going to come out strong, Dad,” the letter promises. “I’m going to make this great. It’ll be a lot of hard work, and I’m going to get it done. I’ll be a leader, too, just like you taught me. Respect my coaches. Be a team player. Have their backs.” Jerry sits there, deaf to the letter’s excitement.

He can hear his teammates’ laughter out on the field, where they are stretching and playing catch. A few are taking swings and Jerry hears the pop-ups and the friendly taunting. He stays in the locker room, quiet. Half the lockers hang open. Towels are draped over the doors or tossed on the floor, clothes too, and the occasional comb or empty gum wrapper. Magazines lie open, half-read. The room is ready to come to back to life. As if it were that easy.

Jerry glances at the old-fashioned clock on the wall, the one they keep around for no reason. The ticking of the second hand is soothing. It softens the ebullience of the letter he never sent. Tick-tick-tick; it makes the room feel less empty. Tick-tick-tick; it softens the blow of that page, the one covered up by his happy letter, the one with the news of the heart that stopped beating. The heart that would never see the success of the boy it had loved so well.

“Take your time, son,” Jerry’s manager had said, “but not too much. The fresh air will do you good.” That’s what Dad would have said. The scar in the palm of that old glove grows blurry. You need your dad when you lose your dad. The one thing you can’t have. Jerry hears the clock again, tick-tick-tick, and stands. He puts the old glove in his locker, and closes the door. 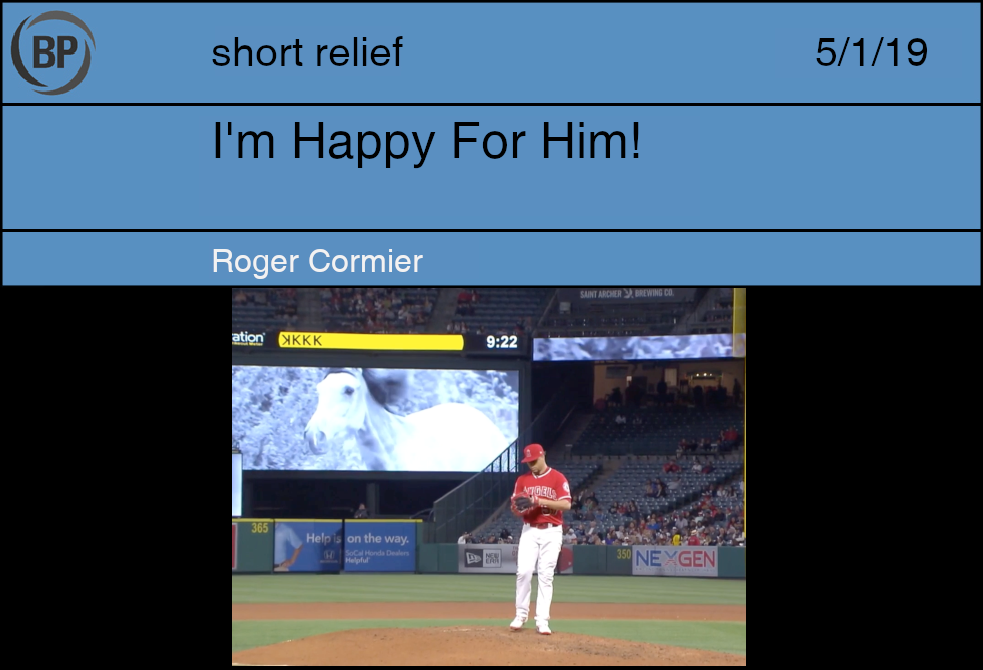 Experience is what you get when you don’t get what you want. I remember the first time I read this: It was at two a.m. last night. I silently nodded to myself, then kind of laughed to myself and said, to myself, something about how funny it was I caught myself literally nodding to myself, as opposed to figuratively. Reading Reddit will do that to a fella.

What I’m trying to say is I am not going to tell you all of the details of my California adventure, because I do not have to. To find out how you, dear reader, could handle California for yourself, for real, you need to have the experience. Or get what you want.  It ended for me sleeping on a virtual stranger’s kitchen floor with a throbbing wisdom tooth.

That was definitely an experience. I moved for vague career-ish reasons mostly. 27 percent of the reason was to hit the reset button the idea of – California – has to offer, if such a thing existed.

It did not exist for me. It was hot, even though it was winter. There were no live sports after 10 p.m. What kind of crap is that?

What I learned out there, almost immediately in fact, is I mostly live in my head, and I needed to work on my head before I did anything else. (It’s an ongoing, very long, process.) It took Dick Whitman a bunch of time to learn this too, and it’s not even clear if he really in fact learned anything during his decade of “discovery”, but that’s another story.

Hansel Robles was a New York Met for three plus seasons. 1.4 combined WARP. None of that matters. Most Mets fans know him, and will continue to remember him until the end of time, for inadvertently pointing up at baseballs that ended up as home runs. He tried to stop doing this, but the natural recoil of his delivery always made it kind of look like he was pointing up all the time, so when his innocent right hand shot up like he was the biggest teacher’s pet simultaneously with a struck fly ball, it caused a lot of anguish and/or eye rolling. Some Met fans also remember the time he pinched his Hansel and Robles while pitching. He needed a change of scenery. A place that has no memory, or can at the very least pretend as much. He needed – California. He needed – this: 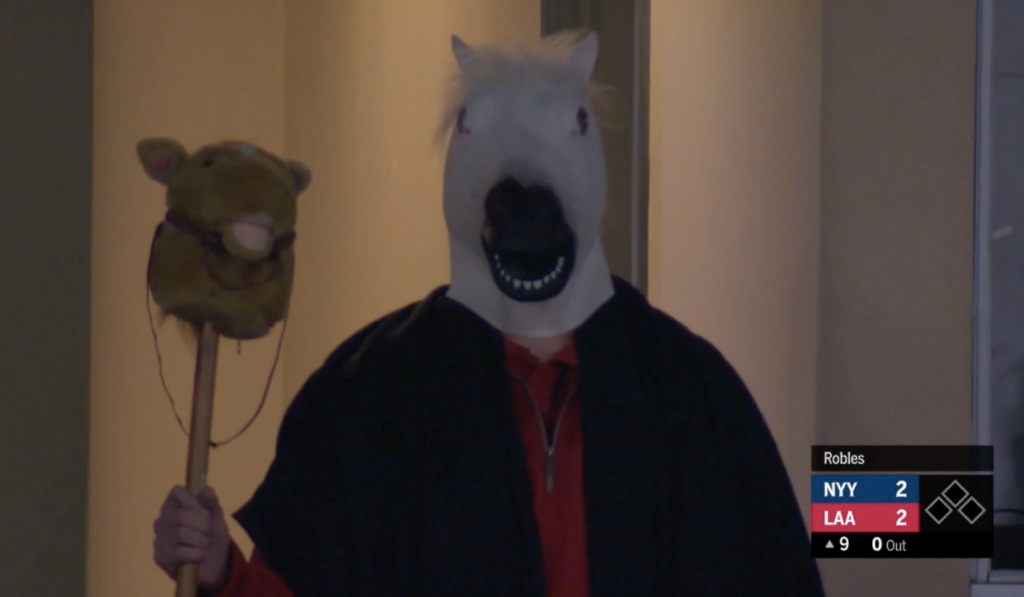 California Hansel has struck out 16 batters in 13 innings so far this season with a 2.58 FIP. He is one of the Angels’ trusted potential closers while Cody Allen takes a quick nap.

The Yankees broadcast last week tried to remind him of his embarrassing past, almost immediately upon Robles entering the contest, showing a three-year-old video of the time the-retired-for-years-now Mark Teixeira messed with him by signaling to the hitter from second base, then pointing at his own cranium to Robles and clearly yelling “I’m in your head!” (presumably rent free, as the current insult goes.) That was old Hansel. This Hansel struck out the side in the ninth inning, and he did it by striking out all three Yankees who went up to bat in the inning, so you can’t argue if it’s “striking out the side” or not because it definitely was, because California Hansel does not get into arguments online. He solves them.

I’m happy for him.

As far as the other former Met in an Angel uniform at the moment? The one with two quality starts in a row? Get back to me on that. Let’s just say I’m not there yet.