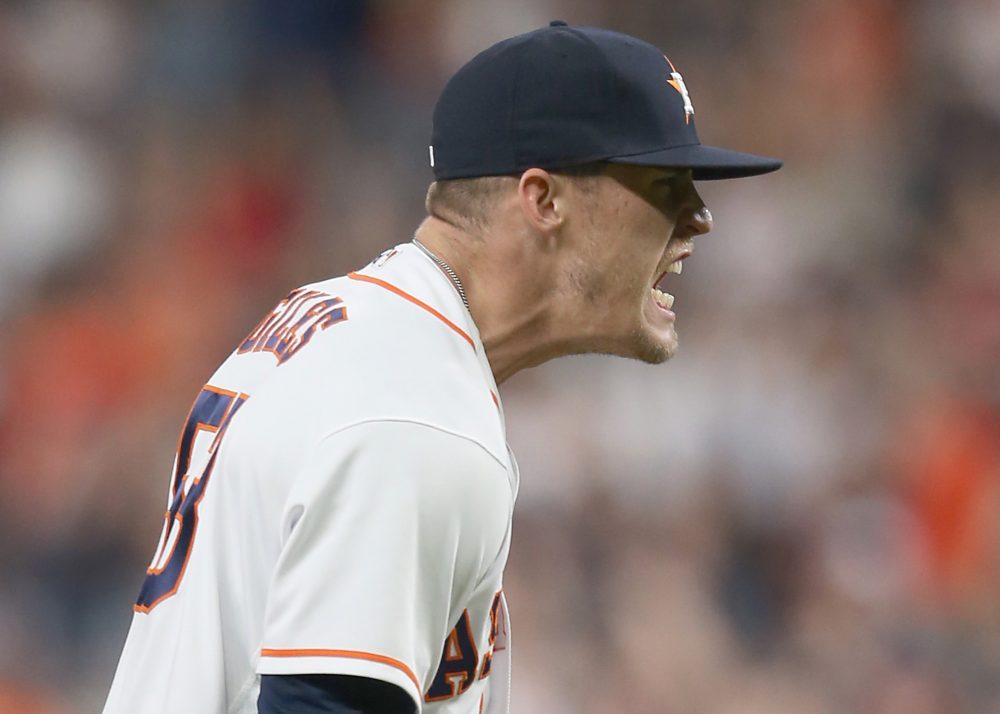 The camera leaves David Cone behind as it pans to follow Doug Strange, the unlikeliest of baseball heroes, as he sidearms the bat offscreen and jogs to first base. It is the eighth inning of the fifth and deciding game of the 1995 ALDS, the count full and the bases loaded. The call comes for the split-finger, and it leaves his hand just a little wrong, plunged a little too early; before the batter can step out of the box, Cone has spun out of his delivery and into a miserable hunch. Mariners shortstop Alex Rodriguez, the tying run, steps on the plate, and the Yankees’ first postseason in 15 years ends a few innings later.

“It took me forever to get over that,” David said. “I couldn’t sleep. I almost didn’t go out of my house for a couple weeks after. … I’ll never forget that flight home. My catcher, Mike Stanley, kept telling me it was his fault for calling the pitch, but I wouldn’t let him get away with it. Buck Showalter, the manager, must have known that he was finished with the Yankees after the loss, and Donnie Mattingly is somewhere else on the plane, going home for good and knowing that he’s never going to play in a World Series. I’d let them all down.”

“I was sure that it was the right call,” he said of the split-finger. “I just didn’t execute. Maybe I’m stubborn, but I have this conviction that I should be able to deliver any pitch in any situation.” It was Cone’s 146th pitch of the night.

Wednesday evening, Cone happened to be in the broadcast booth as Ken Giles, the closer for the Astros, went through a very different and very similar experience: an early May evening, less than 15 years on the line. But weight enough. With runners on second and third, and a scoreless game, Giles chose to challenge Gary Sanchez with a slider rather than give him the open first base. The ball landed 432 feet away.

That, in itself, won’t prove particularly memorable; closers blow leads every day, somewhere. What made the situation unique was the aftermath.

As Giles departed, near the dugout, he swung a right cross at his own face. The jokes, of course, wrote themselves. In a postgame interview, a calmer Giles explained:

I made a horrible pitch, he deserved to hit it over the fence … that’s how it goes. I screwed up a win. We should have won this game, we should have bounced back … I didn’t give our team a chance. Of course I’d be a little frustrated by that. This team deserves the best out of everybody […] They need me to be the best I can be.

It is the traditional, and suitable, act of contrition. Prior to the game, Giles had posted an ERA of 1.80 over 11 appearances.

My left shoulder hurts as I type this. The other night, my daughter didn’t want to brush her teeth. This is not a new phenomenon, but then neither is brushing her teeth, a routine that she and I have completed nearly 1,500 times over the past 4.75 years. The latter fact is, at this moment, immaterial. At this moment she is scream-crying because she’s not tired and she doesn’t like the flavor of the toothpaste, and her uncle is trying to sleep in the room with the adjoining wall, and her brother is tearing books off the shelves in the bedroom because he’s bored, and she’s four and can literally scream like this until it’s time to move out for college, and I know from the books that I’m supposed to be legitimizing her feelings and offering ways to find a solution, and I’m done.

I’m tired and the volume is fraying my nerves, and the fact that she’s even acting like this is proof that I failed this same test last time. So I walk out of the bathroom, into the darkened hallway where no one can see me, and punch myself in the shoulder, just hard enough to weaken the knees. Then I go back in, wait for the crying to stop, talk to her, legitimize her feelings, brush her teeth, and take her in to bed.

It’s not good, the shoulder punching. I understand that. It’s not ideal. But sometimes it feels necessary for the task at hand. It doesn’t happen often, or by plan, and I never do it in front of anyone. But I do it. Technically psychiatrists describe this behavior as NSSI, or non-suicidal self-injury: popularly associated with cutting, it includes any actions to cause self-harm without permanent mutilation or death. People who engage in NSSI (the estimate is about four percent of Americans, though that only includes diagnosed cases) usually do so in private, and cover any evidence of their injuries; it’s not the cry for help so often associated with self-harm, but more of a coping mechanism, a desire to feel pain just to feel.

I don’t know if that description exactly fits me, and I do know that I have no qualifications to understand Giles. But when I saw him do what he did, I know that my first reaction was not to laugh.

If there’s one thing that being a middle-aged dad and being a highly-trained professional closer have in common, it’s in the pressure to be perfect. Just like that hanging slider over the center of the plate, that one day you just don’t have it as a parent feels devastating. This fight is going to scar my kids. They’ll never trust me again. They’ll develop every terrible habit and trait I’ve tried to hide from them. This one bad precedent will ruin everything. It’s an outlook that makes every mistake unforgivable, overwhelming.

Which is, of course, how we treat closers. A batter can strike out five times in a game, but the structure of baseball spreads that failure out for them, padding each failure with half an hour of invisibility in between. A reliever’s misery, meanwhile, is failure concentrate. Which, of course, has been transformed into an element of the closer’s psyche, the way it is with soldiers and other people forced to suffer sharp and sudden stress. The ability to survive this pain becomes what separates the proven closer from the humble setup man, and by defining the role that way it becomes an expectation, a laurel. It also makes it that much harder to find help, in the quiet moments.

There may be no closer who feels the burden of those expectations more than Ken Giles, whose past mistakes earned him a veritable exile from the World Series he’d worked so hard to earn. I don’t know exactly what drove him to punch himself in the face, beyond the fact that he was frustrated. Something drove it from the normal non-face-punching frustration over a certain level. But I do understand that instinct, almost instantaneous, to take the grief and the pain of a single instant—grief that feels so momentous that the brain hasn’t had time to factor in all of its permutations—and transfer it into the tangible, finite pain of a strike from a fist. I don’t believe it’s a display of childishness or disrespect. It’s an act of transference, a psychological tourniquet: never ideal, sometimes necessary to keep going.

I’m not yet done with Angell’s book, but thus far David Cone hasn’t explained how he got over that one terrible pitch that cost his team (a piece of)(an opportunity to possibly make) the World Series. Perhaps it was just time, time and the dulling effects of other sadnesses and joys, overwriting the same mound. I hope that it was something more willful, more conscious than that; I hope it was an act of self-forgiveness.

No one is perfect, and no team deserves “the best out of everybody” all the time. It’s understandable as athletespeak, and we accept these words from miserable postgame interviews as performative, if not exactly confessional. But we also expect them, add them to the pressures of money and camaraderie and heroism and the self that are already heaped onto every athlete, and particularly every closer. Because when it comes to save situations, the mind of the fan is designed toward cynicism.

Here’s a breakdown of the Win Probability Added (WPA) for Giles over the past eight games:

A nearly zero WPA out of a closer isn’t exactly what you’d hope for, of course. But it’s also hard to imagine anyone saying, “That loss was pretty bad, but overall things have pretty much evened out.” Despite the fact that it’s absolutely the case. Fans (and pitchers) treat all saves as given and all blown saves as failures. We’re just not conditioned to recognize a sixth or a 10th of a win, much less add those tiny pieces together and appreciate them. That’s why we need statistics, and context and forgiveness, of ourselves and the people around us.

The same is true of children. It’s easy to get hung up by, and overwhelmed by, the one mistake at the end of the day. But there are the afternoons pushing swings and making up stories about goats, and catching moths for preschool assignments and discovering that they laid eggs, and holding hands as they finally nod off. Life is full of 0.05 WPA days. We should remember those, and when people struggle, accept just how hard it is to remember them.

You need to be logged in to comment. Login or Subscribe
Greg Weber
That was very good
Reply to Greg
KansasCityAstro
Patrick, that was a very humble and human approach to a story. I really appreciate it!
Reply to KansasCityAstro
Michael McKay
Amen brother -- we have all been there -- my kids are all in their 20's, I still have those days and welcome those 0.05 WPA days
Reply to Michael