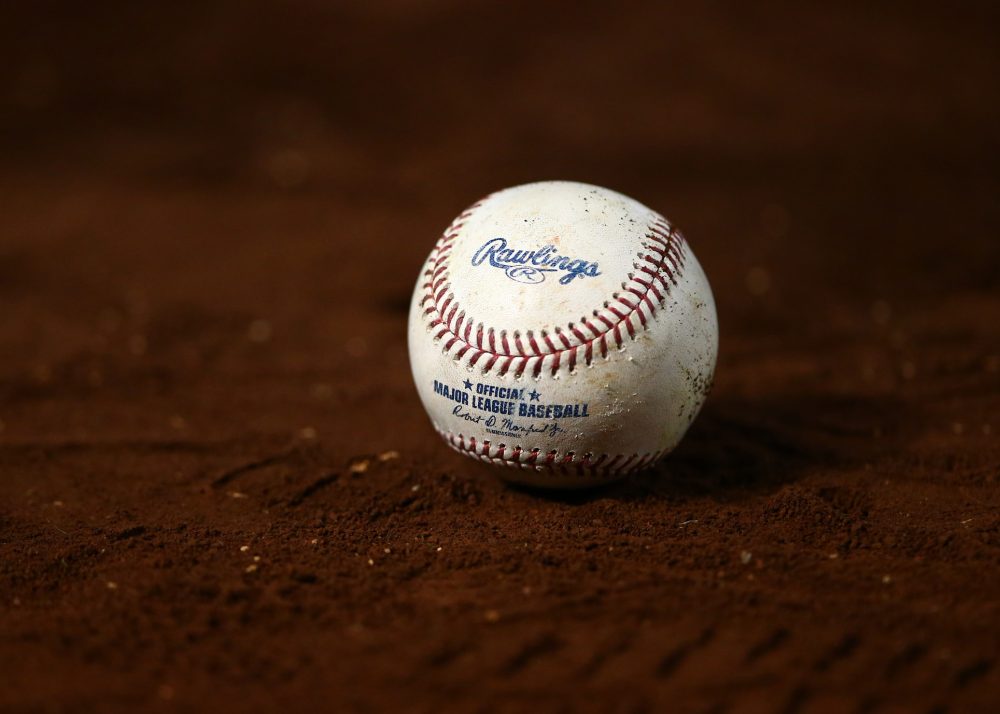 It started when the normally reliable Chris Sale got lit up for three homers by the Mariners in the Red Sox’s season opener. It was part of a record number of taters that flew on Opening Day, as starters from Sale to Zack Greinke were taken deep by the handful. Then Christian Yelich hit a home run in each of his first four games, tying yet another MLB record, this one for consecutive games with a dinger to start a season.

It didn’t take long for fans and players to begin whispering and tweeting about the baseballs being juiced again. It’s early yet for us to come to any definitive conclusion about the 2019 season, but preliminary data shows that the baseball has returned to its aerodynamic peak. Whether that means this season will smash home run records like 2017 did remains to be seen.

Before home run explosion over the last few years, no one worried too much about the baseball’s air resistance. While MLB and Rawlings (the company that manufactures the official baseballs) kept track of dozens of metrics to make sure that the ball was consistent from month to month, they didn’t measure drag.

But drag is incredibly important in determining how likely a hitter is to knock one out of the park. As baseballs become more aerodynamic, they travel further given a certain initial velocity. A deep fly ball that might have been caught at the warning track can instead go into the first row of the stands. A three percent change in drag coefficient can work to add about five feet to a well-hit fly ball, which can in turn increase home runs league wide by an astounding 10-15 percent.

It’s possible to measure the aerodynamics of the baseball using the pitch-tracking radars currently in place in each MLB ballpark. By calculating the loss of speed from when the pitch is released to when it crosses the plate, you can directly measure the drag coefficient on the baseball. I first wrote about the role of decreasing drag in boosting home runs in 2017, and MLB’s commission of scientists and statisticians later confirmed that the more aerodynamic baseballs in use that year were largely to blame for the spike in home runs. The same commission rejected some alternate hypotheses, like rising temperatures and a league-wide boost in launch angle pushing more balls over the fence.

The current era has featured some large fluctuations in drag coefficient, leading to first an explosion in 2016 and 2017, and then a dialing back of homers last year. Curious about the record-breaking home run tallies in the last few days, I used the same methodology to measure the aerodynamics of the baseballs so far in 2019. 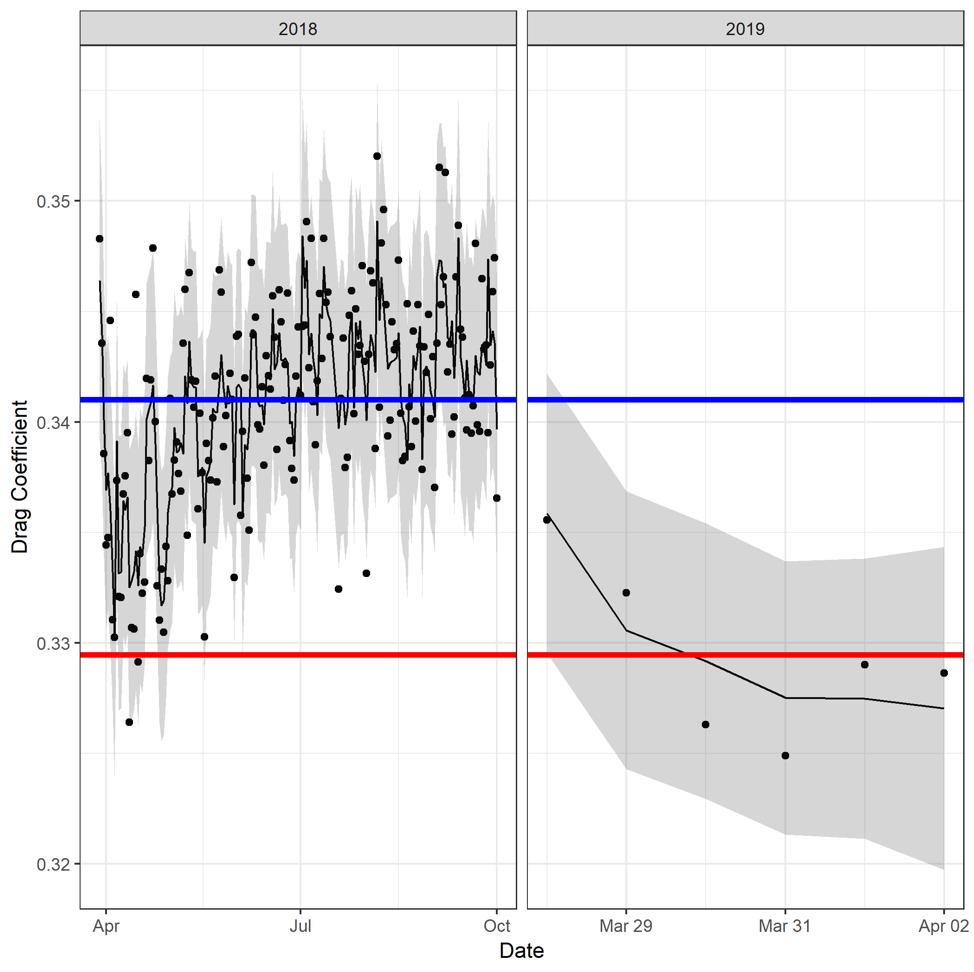 We’re only a week into the 2019 season, but the drag numbers so far are among the lowest recorded in the last calendar year. With apologies for gory math, the current 2019 season average drag coefficient (the red line) would be below the 95 percent credible interval (the shaded area) for about nine-tenths of the 2018 season. (I used a Bayesian Random Walk model implemented in INLA to calculate these credible intervals, averaging the drag numbers in each game and adjusting for park.)

There were only a handful of six-day stretches in 2018 that had drag numbers below what we’re seeing now, and most were in late June and early July. All of this means that 2019’s data so far is quite a bit different than what we saw through most of last year.

These drag coefficients factor out the effects of temperature and air density, so they aren’t a product of April cold. However, the numbers could be deceptive if the radars used to track pitches have changed from year to year. I consulted with some experts within baseball who were not aware of any specific modifications to the radar this year that could produce this pattern, but it’s an important caveat of which to be aware.

On the one hand, it’s only been six days, and we don’t quite have the statistical basis to say that these drag coefficients are unprecedented compared to 2018. On the other hand, we’ve witnessed about 5,000 fastballs so far this season, so it’s not as if our sample size is small. At least so far, the baseball has played like it’s much more aerodynamic than it was last year. In fact, the current drag coefficient is really only comparable to 2017, when the baseballs were more aerodynamic than they had been in at least a decade.

It’s not just fancy radar tracking indicating that the baseball is flying through the air more easily. The current number of home runs per game (as of this writing) is the highest it’s been since the heady days of 2017, the year that teams and players broke dinger-related records everywhere you looked. That’s especially remarkable considering that we’re in what is typically the coldest part of the regular season, when lower temperatures and higher winds tend to suppress offense and keep balls in the air within the park. Comparing only from April to April, this year’s rate of home runs per fly ball is even a little bit higher than it was in 2017.

With that said, the current measurements are no guarantee that 2019 will be another year of record-shattering homer hitting. The trouble with the drag measurements is that they are not consistent from June to August, from week to week, or even sometimes from day to day. Whether because of natural manufacturing variation or differences in the underlying supplies of cowhide and thread that go into the baseballs, drag has a tendency to fluctuate up and down over the course of a year. So the homers that fly in the first week of April wouldn’t necessarily clear the fence a week later.

It’s possible that this one-week drop in drag coefficient subsides and the baseball returns to its 2018 levels. On the other hand, it’s almost equally probable that the ball becomes even more slippery and flies ever farther. Either way, it’s clear that the baseball’s air resistance is something to keep an eye on for the remainder of the 2019 season.

You need to be logged in to comment. Login or Subscribe
deadheadbrewer
Great stuff!
Reply to deadheadbrewer
Brendan Gawlowski
Rob, great work. Is there any way to break this down day-by-day? The HR rate was 1.6/9 on Opening Day and has been pretty low on each subsequent day. Anecdotally, the ball hasn't seemed to be flying all that abnormally since the opener (this is just one man's impression, which of course doesn't mean squat) but during the that day, there seemed to be a lot of cases where outfielders looked surprised to see balls flying as far as they did, or hitters saying that the ball carried much better than they'd anticipated.

While I don't want to hypothesize that the league used different balls for the opener -- the logistics and conspiracy theory angle sound absurd when said aloud like this -- I do want to ask if you think it's possible that happened?
Reply to Brendan
Robert Arthur
My understanding, and it could be incorrect (especially for Opening Day), is that each MLB team independently acquires balls from Rawlings on their own schedules. So the Rays might not re-up when the Red Sox do, etc. Of course, there might be special accommodations for the beginning of a season OR for occasions like Opening Day. So I really don't know. That said, drag has stayed pretty low even since then, although the home runs have not happened quite as easily. It might just be a sample size issue or maybe the decrease in drag is being offset by other factors (like more strikeouts, or weather) that are keeping the overall home run rate lower.
Reply to Robert
Brendan Gawlowski
The special accommodations thing is what I'm curious about... I don't know if they used a special "Opening Day" ball, like they do for the World Series. In any case, thanks for doing the follow up research on this, and curious to see where it goes throughout the year.
Reply to Brendan
rkw
No doubt there are forces at play this year. I'd never considered drag to be a significant factor until your write up.

Made me consider another area where drag is most certainly a factor. Pitches will maybe have less movement. Pitches move specifically because of drag/friction. I'm thinking less drag should mean less movement but likely higher spin rates(?). There is a ton of factors at play in the 60'6". im sure those numbers are affected by the drag coefficient of the baseball. Perhaps it's the stitching being different?

If the balls sure the balls are simply wrapped tighter allowing a more powerful launch may also affect the HR rate?

I would suggest looking at exit velocity on batted balls. Attach that to launch angle. You could then compare to any previous season of to average historical numbers? Harder to do that with pitched balls given the randomness of how volitile pitching numbers must be pitch to pitch. Still comparisons should be possible looking at the values on pitches hit out? Many influences, too many for me to look at anymore. Leave that to the young guns as they say.

Very nice write up...enjoyed the thought experiment.
Reply to rkw
dwgordon
Great article! You seem to be onto something with this. Since you posted this article, the home run rate has shot up even further. The rate for this season so far is now well above the rate at this time in 2017. In fact, as of the conclusion of yesterday's games, the home run rate is actually higher than the full-season rate on 2017 (this year is currently at 1.31 per game per team). If this holds, the carnage will far exceed what we saw in 2017!
Reply to dwgordon
Shadetree42
It's a whole lot warmer this spring as compared to last spring..
Reply to Shadetree42
loopdawgg@hotmail.com
the weather in denver?
Reply to loopdawgg@hotmail.com