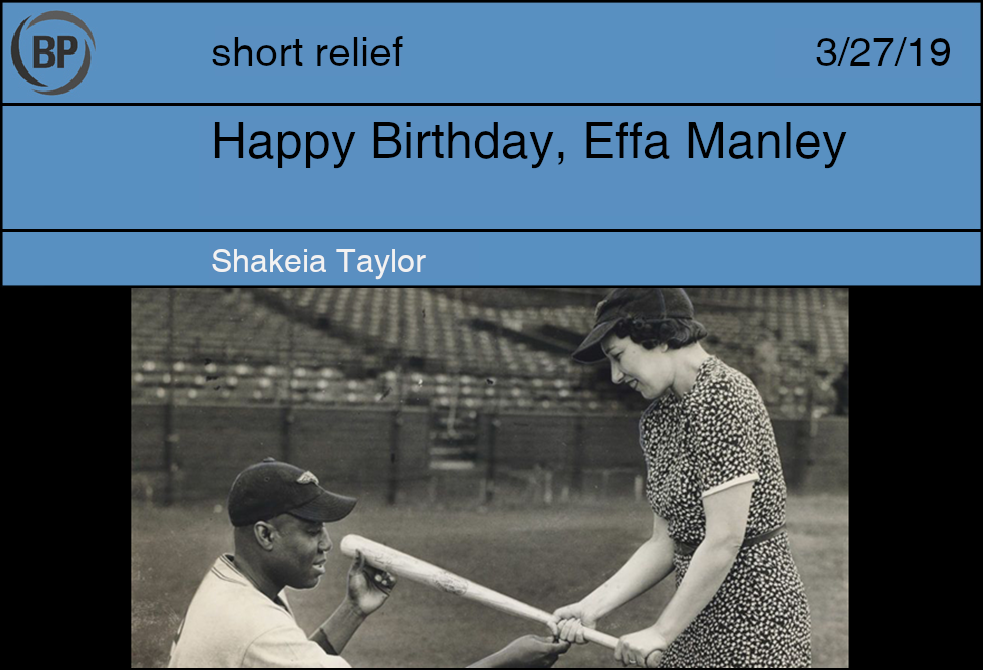 Today, March 27th, is Effa Manley’s birthday. Many of us know the usual things about her. First woman elected to the Baseball Hall of Fame; married to Abe Manley, owner of the Newark Eagles. Earned an induction into the Hall of Fame on the strength of her shrewdness and steadfast belief that Negro League teams should be compensated for the loss of players to MLB teams.

But what goes unsaid is that Manley was the rare owner who actually seemed to care about her players. She worked to improve travel schedules, accommodations, and pay. She used her position as co-owner of the team to help players get jobs and advocate for causes she felt were important to both her and her team. She sponsored a team in Puerto Rico, she organized boycotts, she even staged an anti-lynching day. Manley understood that her team was a community resource and that they way they were perceived was important.

That’s a strong contrast to today’s owners. They don’t seem to take any stands that are pro-player at all. In fact, they seem to do the exact opposite. Sitting on billions of dollars and refusing to sign players to larger contracts. Demanding more money from ticket and merchandise sales while not appearing to be too concerned with the team they’re putting on the field or the fans whose money they hope to get. Manipulating service time to extend team control over players.

Today’s owners often fail to take a firm stance on social and civic issues too, hoping that upholding the status quo will add a few cushions to their thrones of money. Backlash over these things continues to grow. Players and fans alike are beginning to speak out, hoping that public action will follow.

Maybe it’s time for baseball take a look at its own history and see what lessons they’ve missed. Effa Manley left the blueprint for ways teams could be both profitable and player-positive. She invested in her team, her players, and their community and the payoff was winning a Negro League World Series. Today’s owners have made a concerted effort to ensure there won’t be a new Effa Manley by seemingly colluding to hold the market hostage. No owner seems to want to step above the fray and shake up the league. The power to make baseball exciting, labor friendly, and more community adjacent rests with team owners. On her birthday, I am reminded that professional baseball has been without an Effa Manley for decades and there’s no telling how much longer it will be. 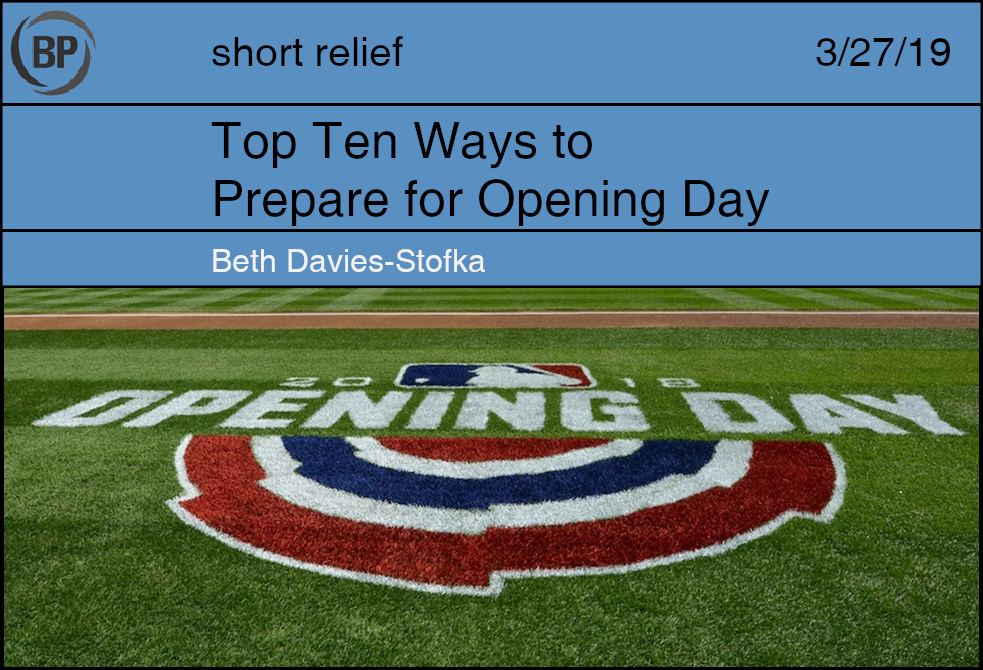 Friends, let’s get right to it. We’ve heard the paeans to spring. Everything’s new again, yeah, yeah, we know that. The question now is, are you ready for baseball? Here’s a handy checklist to help you make sure that you are ready for Opening Day. 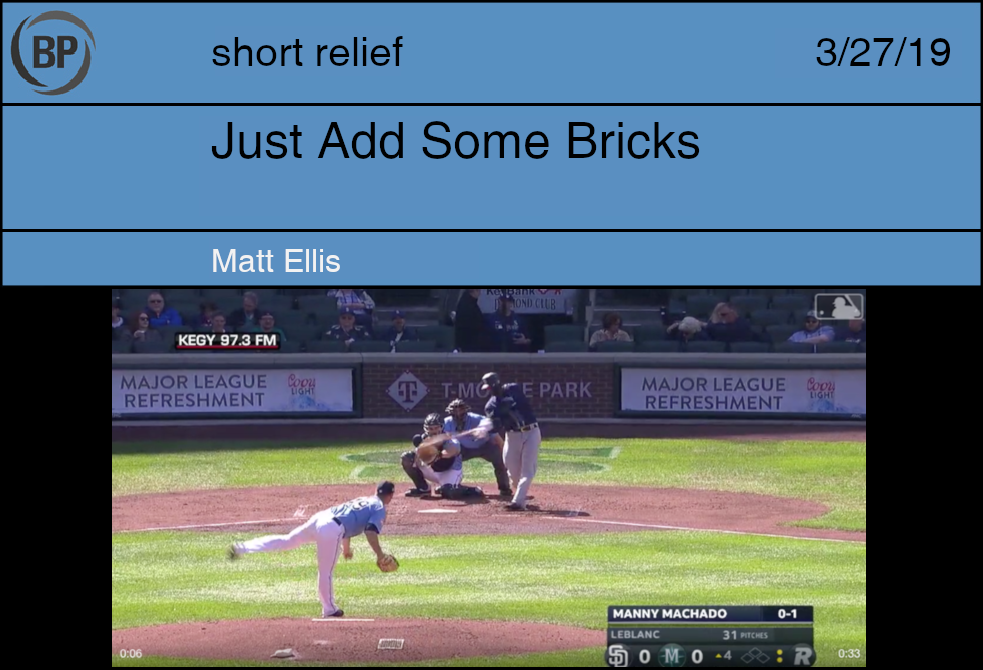 Look, for sure, I get it. They were mad when we took off the aesthetically pleasing cream-colored signage with a classic serif font that suggested both history and contemporaneity.

Sure, the name “Safeco” had all but evacuated itself from its original meaning–a profitable late-90’s insurance company–and turned into a general signifier for a baseball park that is already older than nearly half of the rest of the American League. In this sense, we can all come together now and realize how important it is that we continue this general affect.

But money is money. So why don’t we just Add some Bricks?

Oh, just bricks? Of course not! That is valuable real estate. Yes, I hear you Hank, adding that gaudy pink reflective signage in a glorified sans-serif Arial ripoff might seem gauche. Sure. And you know what? I agree with you, pal! That’s why, and say it with me now, Just Add Some Bricks!

It’s really a pity we couldn’t have Ichiro filmed in front of the new wall, as a method to tell fans that we really do care about The Past™. I mean, it’s true, we do care about The Past™, just not the past. Now that we live in the simulacrum–an era of signs of signs of signs–I can think of no better way to tell our custome–excuse me our clients–that we are thinking about their own affective relationship to this team throughout the past forty years of their lives, or that of their childrens’ future emotional investment. No more Ichiro? Gonna toss Felix out to dry? Want them to develop an attachment to Justus Sheffield? Well what can I say, *clears throat, crowd joins in unison* Just Add Some Bricks!

I’d tell you this is good for you, but you already know that. History is the thing we learn from, that we do not learn from history. Someone once said that, I can’t remember who. But although season ticket renewals may be down we have a new crop of t-shirts coming in from China next week. We are going to send Marco and that kid from Philly to Seattle Childrens’. If we don’t get them as customers, well, it will look real good on camera.

On camera you ask? Right, don’t forget our motto: Just Add Some Bricks.