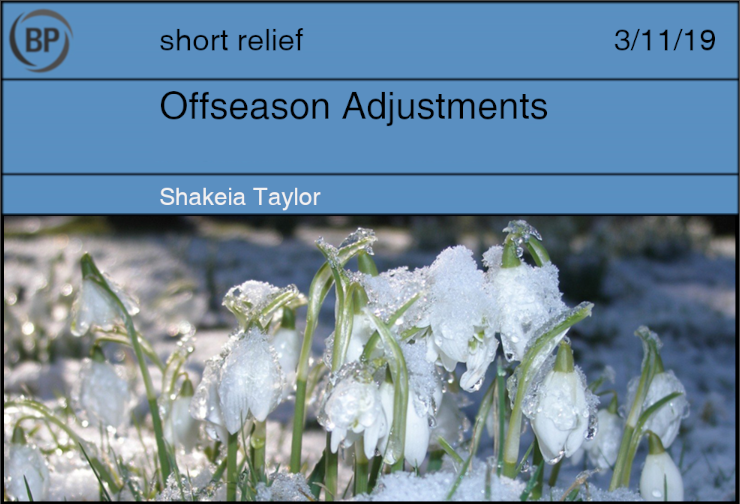 If you ask me, I’d say the offseason gets a bad rap. I’d even tell you I’m starting to think we’re viewing it the wrong way. Every November, we collectively lament the end of baseball season, but the offseason is a time to recover from losses. It’s a time to lick your wounds, work on your technique, shake off whatever bad things happened in the previous season and make adjustments.

This offseason, I lost someone extremely close to me. I spent a lot of time thinking about it. And re-thinking about it. And wondering what the season would be like without them. How am I going to enjoy baseball without my main baseball person? Who will I talk to when my favorite baseball team makes me mad? Who will I talk to when they do cool and wonderful things? Baseball is where I find my peace so it was especially nice to have someone to share it with so freely and without judgment. When things don’t go the way we planned, we start wondering what we can do differently. After spending entirely too much time moping, I realized that it was time to maybe move on.

In October 2016 before NLCS Game 5, Pete Rose, Alex Rodriguez, and Frank Thomas had one of my favorite baseball conversations, discussing tricks for hitting success. Well, not surprisingly, Pete Rose’s advice was about making adjustments in the box.  “Never change your swing. Your swing got you into the big leagues,” Rose said. He advised hitters to move around in the box to find their spot. Move back in the box, move forward in the box. Seems like good advice to use in life.

Whenever something doesn’t go the way we hoped, it’s natural to start trying to figure out ways to “change your swing” instead of changing your position. A new season is on the horizon. While I’ll miss my baseball person, I’m happy baseball is back soon. I’ve made my offseason adjustments. And I’m ready. 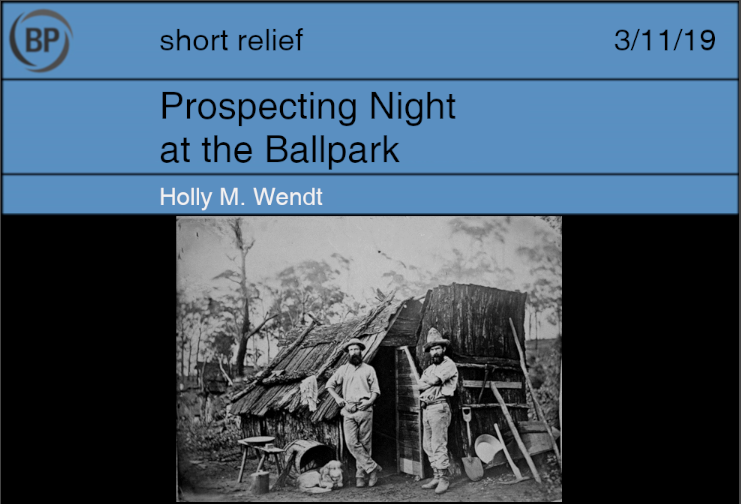 It’s a new way to spend a rain delay or a wily ploy to sell more beer, but ballparks all over the nation are launching their Prospecting Night at the Ballpark initiatives. You read that right—not prospect night, but prospecting night.

It all began at a Las Vegas Aviators game. Eleven-year-old Brayden Jones, disoriented from a Dizzy Bat Race, sprawled in dirt near the home team’s dugout and rose with a 2.2 gram lump of gold in his hand. Jones, having just learned about the gold rushes in the American West in his social studies class, was elated.

“I did one of those little panning things at Disneyland and found some pyrite, but everyone finds pyrite. It’s part of the schtick. But this is real!” Jones was invited to take part in the official launch of Prospecting Night. “It was really weird to stick a shovel in the infield,” he said. “I hope the players don’t get mad.”

“I think someone just lost a filling,” said a grounds crew member who wishes to remain anonymous. “And now it’s way out of control. I mean, all the dirt in the infield gets brought in from outside. If you want to dig in it, go out there. My back is already bad.”

Other members of grounds crews across the minor leagues have expressed similar exasperation, but team executives are excited about the possibilities, as they’ve been able to increase revenues via prospecting tickets and the “halfsies on whatever you find” conditions on these special promotional experiences. “We’re confident someone’s going to strike it rich,” ownership group member Fairfield Dixon said. “It’s incredibly special to be able to take part in these kinds of extraordinary fan experiences. I haven’t, myself, been to the park yet, but my dad would be thrilled to see this kind of agile use of the ballpark. Loved the game, my old dad did. He’d be just ecstatic. With the new pace of play changes, we might make up enough time for a seventh-inning dig.”

Fontaine Lagares, of Arrolime, Nevada, is less convinced. “‘Extraordinary experiences?’ You mean bilking fans the way you do these players themselves. Just let us see the boys play. I can watch my kids dig in the sand any time.” Lagares has twice housed players during short season baseball and is a vocal critic of service time manipulation. She also has no fewer than six velour bags stuffed with stones and pressed pennies from theme park “pan for gold” attractions, thanks to her two children. “They call it fool’s gold for a [expletive] reason.”

Others, however, are more optimistic. “I found something,” utility infielder Logan Parks said. “I went out to take a few more grounders last week, and someone had left one of those little pans out. I had some water with me, so I figured, might as well. And it panned out.” Parks laughed.

“I told you I lost an earring,” teammate Darren Esquivel said. “Just show me. It’s the one my nana bought me when I was drafted.”

But Parks, like any good prospector, isn’t sharing his secrets. 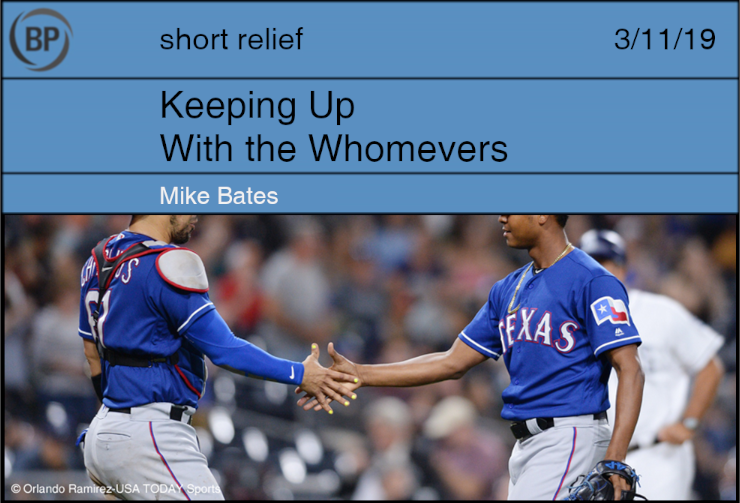 Shit. I’ve forgotten his name already. Just a second, let me go look him up.

Ok, I’m back. You’re still here? Good. Jose Leclerc. I’m embarrassed to admit that, until he signed his extension with the Rangers this week, I had never heard of him before. I’ve been given this platform by my esteemed friend, Patrick Dubuque, to share my thoughts as some kind of authoritative voice on some aspect of the game, and here I can’t name the Rangers closer. It should be humiliating.

And yet, when I take a step back, I don’t feel remotely bad about my ignorance about Ol’ What’s His Name. There were almost 1400 people who played a game in the majors last year. This particular one is a 25 year old with just a single good season under his belt for a club that lost 95 games last year, and will again this year. That’s just not, I’m afraid, somebody I’m going to run across very often in my non-fantasy-playing life, and not one I’m going to seek out.

Besides, by not knowing about Joe the Clerk two weeks ago, I got to discover him last week. How delightful that this game can still surprise me! He is, indeed, a very good young pitcher who has made himself impressively wealthy and provided security for himself and any offspring he might someday produce. Congratulations to him and said offspring!

Don’t get me wrong. Knowledge is good. And maybe you have time to think about the Lescriveners of the world. That used to be me too, and sometimes I genuinely do miss having that knowledge at my fingertips, but for now I prefer not to. Somewhere along the way, between work and family and all of the other things in life that steal your attention, at some point you have to forgive yourself for letting stuff like “Who replaced Keone Kela at the back end of the Rangers bullpen?” go.