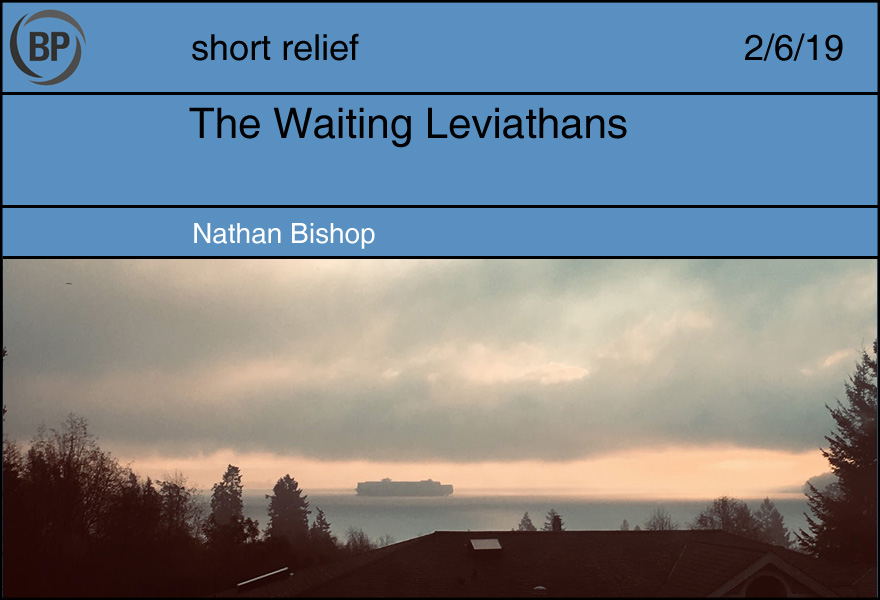 Far from my backyard, if you squint, you can just make out the edge of the Puget Sound. It lies to the east of us, and as weather systems blow in from the north or southwest our modest little view lets us see the winter storms not as they approach, but as they depart; our small town’s blizzard or windstorm nothing but the footnoted precursor of the havoc soon to be wreaked on The Almighty Seattle Metro.

Occasionally we wake up to the silent, hulking shroud of a massive container ship sitting in the water. Utterly leviathan, measuring up to 1,200 feet, these vessels devour the horizon for weeks at a time, waiting for whatever complex gears of unions, scheduling, and machinery is necessary to turn in concert to unload their massive payloads. Until such a time they lie still, hulking, waiting.

A few years ago there was a labor strike that left the ships unable to be off-loaded, and for seemingly an entire summer the sound served as a veritable breeding ground for the largest ships on the planet. Every morning brought the birth of one or two more of these giants, whose massive hulls gobbed up ever more of the water, skyline, and everything else around them.

The Puget Sound was thus, at least temporarily, despoiled. The beauty of the things we love and cherish are dependent on so many systems and subsystems that run so well so often we don’t notice them until they break. We learn to deal with it, likely with a helpless shrug and a comment like “well, they’ll figure it out eventually I suppose.”

That line of thinking, though small and dismissive, is basically correct. Capitalism needs motion. Eventually someone gives in, the ships are docked, and everything and everyone is sent where they need to be. All that’s left is dirtied water, a lost summer, broken trust, and a lingering worry that our favorite things are at the mercy of some very unsympathetic people.

So tomorrow I’ll wake up and look out, and I’ll hope because hope is the main thing I have. I’ll hope that the men who need to be paid to make things look the way they should get paid. I’ll hope the horizon is clear and cloudless, and the water a brilliant blue, with only a small ferry arcing its small white trail through it. I’ll hope that the things that are designed to keep us enjoying the good things we have are working, at least if just enough. But they haven’t been for awhile, and so I doubt it. 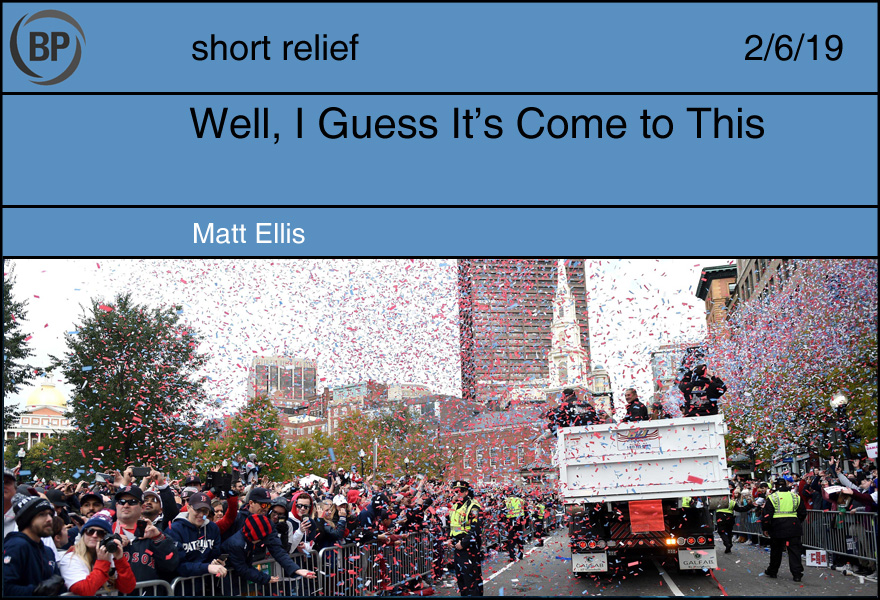 It’s 2003 and the house is blue. We are there, memorizing the sheets of data in preparation for our AP US History exam, and on the television is a man named Steve Bartman trying to catch a baseball that is headed for him but he shouldn’t, and yet he doesn’t realize it yet. What amazes me most about this situation is that before said ball is in the air I am excited, excited that the two longest World Series droughts seem all but inevitable to fall in the same year. The Chicago Cubs and the Boston Red Sox, set to face off in the Fall Classic, giving us perhaps the greatest single series anyone alive has ever seen. Little did I realize at the time what it would actually look like when it finally happened.

It’s 2004 and I’m watching Dave Roberts steal second base, and I’m screaming. I’ve never been to Boston–hell, never seen Carlton Fisk wish his ball fair. I just knew that the announcer said something like “historic” and I like history, and I want to see it happen and I jump up and down and shout, shout that it’s finally going to happen even though I wasn’t waiting for it. It becomes a joke on the television show LOST.

It’s 2015 and I live in Providence, Rhode Island, and I’m not entirely excited about it, but I at least get to see Jackie Bradley Jr. play baseball an exit up the highway. I live with the fact that it’s this team doing the whole thing and don’t really think twice because mine has Robinson Cano and Felix Hernandez, and then I go about my business being mad at the Astros, or maybe Mike Trout.

Nothing says Boston like a bunch of Pats fans beating the shit out of each other after a championship parade @OnlyInBOS pic.twitter.com/nd86c36BXe

It’s 2019 and I’ve had it. I’ve absolutely had it, I’m done. Never before in sports history have good guys become the bad guys in this fashion: not in speed but in depth, the manner by which evil manifests in late capitalism to be the antithesis of all that is good and holy. I hear fireworks at 3 AM after the Sox take the crown, or when the Patriots win a random football game in November. I get yelled at at the grocery store because I made a Tom Brady joke to my wife in line to pay for our toilet paper and bananas. A bartender charges me extra for requesting he change the channel when the Sox are playing the hapless White Sox in a meaningless June game. I’m serious, that happened.

No, I’ve had it, and I’ve absolutely had enough. If the Boston Red Sox and New York Yankees face off in this year’s American League Championship Series, I have come to the conclusion that I will be rooting for the New York Yankees.

And that, alone my friends, is a realization that no man need ever face in his life. And so it goes.

You need to be logged in to comment. Login or Subscribe
Shaun P.
Matt - yeah, it's kinda crazy out here in New England. Back in 1999, I was refused admittance to a bar in downtown Boston just because I had a New York State driver's license. I was a first year law student, prepared to pay cash to drink in a place with friends, and they didn't want my money or my business, just because of my driver's license. I've never gone back.
Reply to Shaun