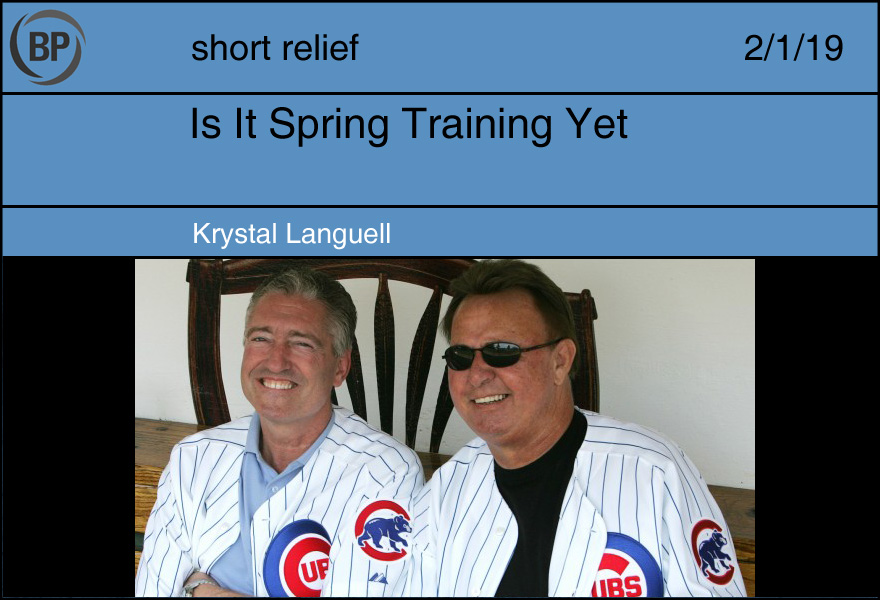 “And springtime brought me the frightful laugh of an idiot.”
-Arthur Rimbaud

And Pat Hughes says: As we pause 10 seconds for station identification.
He says mental lapses are a thing of the past.
It doesn’t hurt to raise his left arm.
There was a playfulness—
And Ron Santo says: I’m only eating a hot dog.
And Pat says: Can you be professional right now?
He’s certainly not pitching like he has his car double-parked.
Works out of the stretch.
He just has such tremendous power.

And Ron Coomer says: We could get into kind of
an existential conversation.
And Pat says: We are underway.
They tell me he can do it all.
The word ‘strapping’ comes to mind.
I’m not sure what the call was there.
And Ron says: He just screamed into his glove.
Pat: An asterisk on this season.
Ron: Is he pronouncing that right or is Jack Daniels pronouncing that?

A joke about moveable walls goes on for weeks
and I laugh at it,
but didn’t hear the original.
Understanding the joke isn’t the point.
Laundry that stays in the bag on short trips home.
Alarm clocks. The weather. New names.
I listen on the subway for the artful jab,
search for a thread to follow for a few stops.
The minutiae an eavesdropper collects
amounts to preparation for half-listening
to Ron describe the office chairs. 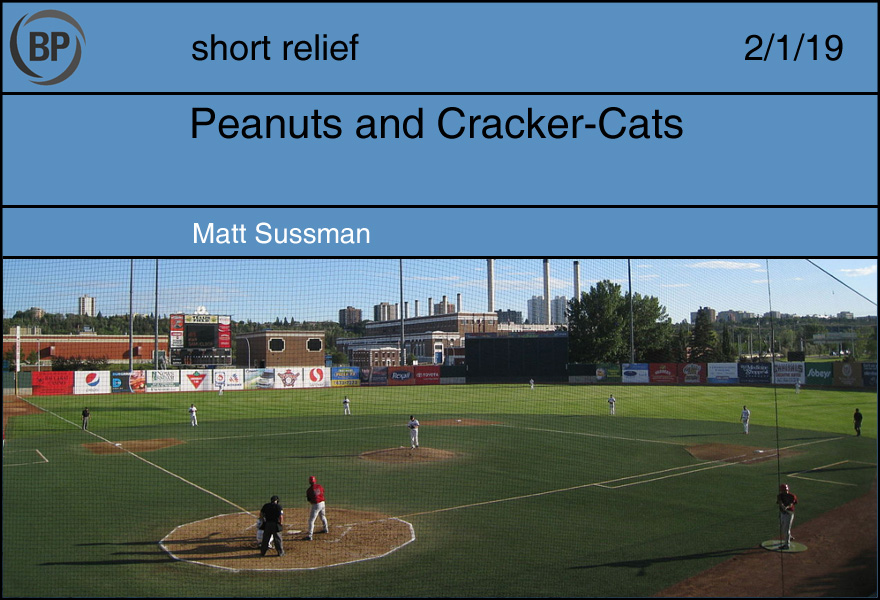 Edmonton briefly enjoyed a quirky baseball history. Bert Blyleven, Jason Giambi, Fernando Valenzuela and Johan Santana were among dozens of ex-major leaguers who made stops in North America’s northernmost major city when they reached Triple-A with the Edmonton Trappers. This team affiliated with seven different orgs over 20 years, lastly with the Expos, which should tell you what really happened to them. A purchasing group that included Nolan Ryan bought the team and turned them into the Round Rock Express. I knew none of this in 2008. I was just a traveling software trainer back that enjoyed going to different baseball stadiums on my weekends off, and had found myself in Alberta for a summer.

In what could be generously described as “a couple hundred of my new closest friends,” I drove up to Edmonton to watch the Cracker-Cats of the Golden Baseball League play the St. George Roadrunners in a place known as Telus Field. This structure had a comely outfield of grass to complement an artificial turf infield. It’s like, how many more shades of green can we jam into an empty ballpark? It truly felt like someone caught wind that I wanted to go see a baseball game in Edmonton and they quickly cobbled together a stadium in one sitcom episode’s worth of time.

The supporting cast had that same feel. The Cracker-Cats’ main hitter was Jose Morban, who had a completely anonymous baseball career, including the distinction of being the Rule 5 draft pick the Minnesota Twins took which necessitated the need to designate David Ortiz for assignment. St. George’s star player was Wiki Gonzalez, who I assume could no longer stick with the Padres after Wikipedia became the more productive wiki.

Normal humans go to Edmonton for their giant mall, and I went to what I assume was a legitimate baseball game, but I am not quite sure if anyone kept score, or if the baseball field is still there. The Internet says it is, but the Cracker-Cats are not, for they later rebranded to the Edmonton Capitals and nobody wants to see such a watered-down sports team featuring former Triple-A stars that didn’t even make the BP annual. Like all Edmonton things, I will assume it is now a Tim Horton’s. 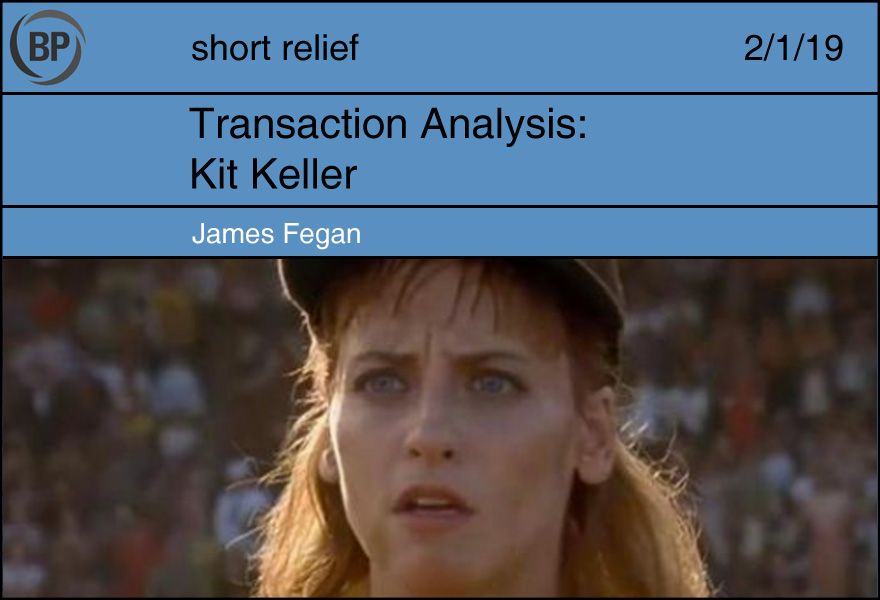 The Rockford Peaches traded RHP Kit Keller to the Racine Belles for a player to be named later. [7/31]

The fledgling All-American Girls Professional Baseball League hit another important milestone as it struggles to garner attention to its strikingly high level of play in its inaugural season. It witnessed its first trade dumping a clubhouse cancer for pennies on the dollar to salvage chemistry for what should be a World Series-contender.

Or, better said, a World Series favorite. Before this deal, the Peaches’ only vulnerability was the possibility of multiple playoff games of Keller shaking off signs from her presumptive league MVP of a sister in Dottie Hinson, feuding with a suddenly engaged and focused manager in Jimmy Dugan, and challenging her team’s otherwise indefatigable pitching depth by necessitating the shameful use of a relief pitcher with her late-game meltdowns. Any doubts about the necessity of the move were combated by reports of a tirade from Keller upon learning the news that resulted in a broken window at the team’s hotel.

Between losing Marla Hooch earlier in the season and having to lean on starting shortstop Ellen Sue Gotlander more in the starting rotation, the Peaches offense cannot hope to recreate its gangbusters first half, but this is an elite run prevention unit built around a Hall of Fame-caliber field general behind the plate. In effect, Keller has already provided the Peaches the greatest service she could provide just by coming to try out, removing Hinson’s last qualms about joining the league and providing them with a franchise centerpiece for the next decade or longer.

A few scouts have noted the quality of Keller’s raw stuff make her a worthy buy-low/change of scenery acquisition for the Belles, though it’s hard to envision how a team with its own playoff ambitions can allot innings in high-leverage games to a glorified reclamation project. Due to a truly bonkers plate approach, recouping any value by rotating Keller in as offensive depth is even more unlikely.