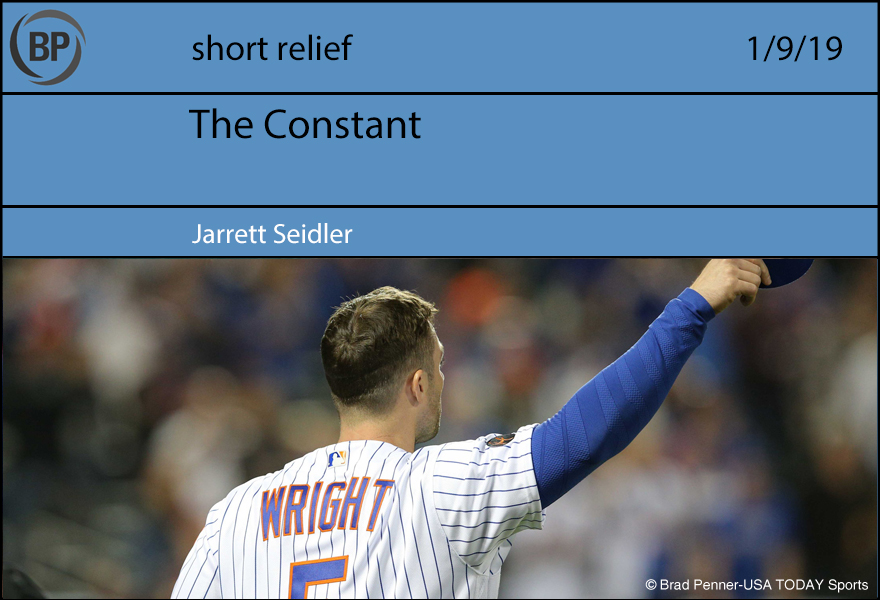 “Time, you know, takes everyone out. It’s undefeated.” — Rocky Balboa in Creed

David Wright’s career has been a constant in my adult life, a series of memorable moments in time and space. Many of these are marked in my brain with some weird correlation to whatever was going on in my life at the time. I saw many of them in person.

Wright was drafted by the Mets in 2001, right when I graduated high school. I saw him play live for the first time the next spring, in a B-side game at the old Orioles complex. I kept missing seeing him in the high-minors because he was so good that he got promoted too quickly. He made his MLB debut in between my junior and senior years of college, and I probably spent too many days my senior year on the Turnpike going to see him play. I often sought refuge from my 1L fall at Shea Stadium during the last days of the 2007 season, Wright’s would-be MVP year where he valiantly tried to carry the team through the worst collapse in MLB history.

The last game I ever saw with my late grandfather was Captain America’s walkoff against Puerto Rico in the 2009 WBC. I saw the last game at Shea Stadium and the first game at Citi Field. I bought tickets in the first few rows next to third to see him in the 2013 WBC in Miami, only to have him be scratched late—an early recurrence of the back problems that would haunt the second half of a career once on a Cooperstown trajectory.

I was at the April 2015 game against Philly where he tweaked his back sliding—that was the recurrence that ultimately led to the end—and also at the game four months later in Philly when he made his big return with a classic David Wright Citizens Bank Park moonshot homer. I was at Game 3 of the World Series, where his home run shook the upper deck. And I was at his last walkoff, a May 2016 single against the Brewers. We all kind of knew the end was approaching rapidly then, and enjoyed it nevertheless knowing it might be over.

Last April, I caught a bad case of bronchitis that ended up lingering for a few weeks, wiping out a bunch of planned early-season MILB games. It was the culmination of several years of inexplicably declining health. My GP sent me for a follow-up echocardiogram, which saved my life. Over the next month or two, I found out that I was in severe heart failure due to a genetic defect. It was discovered just in time for me to not drop dead of an unexpected cardiac event. I also had severe, near-fatal complications during two diagnostic procedures over the summer to determine the extent of things; if you were expecting to see me at the Futures Game and didn’t, that’s why.

I had open heart surgery on September 5th. My surgeon estimated beforehand that the likelihood of a fully successful procedure was about 75 or 80 percent, which is not precisely what you want to hear before they stop your heart for hours in the hopes that it will restart. But hey, you’re reading this piece, so I’m still here.

I was discharged from the hospital on September 10th. Three days later, the Mets announced that Wright would play his last game on September 27th. Attending that game became my new recovery target—if David Wright could shrug off spinal stenosis to take a few more at-bats, I wasn’t going to let some pesky heart surgery stop me from getting there. Having something to shoot for lifted my mood and aided my recovery. It was one last bit of inspiration from The Captain as a player.

I made it to the game, with the help of a family member and a few friends. It was one of the worst baseball games I’ve ever been to, but one of the best baseball experiences I’ve ever had. Wright walked one last time, then fouled out to third and was removed for Amed Rosario. He gave a wonderful speech after the game ended.

The Mets finally released David Wright off the roster on Monday, presumably after the final settlement of an insurance policy on the remainder of his contract. He immediately retired and was hired into the front office as a special advisor, a role in which he’d been functioning since the Winter Meetings, opening a potential door for future memories in a new role… 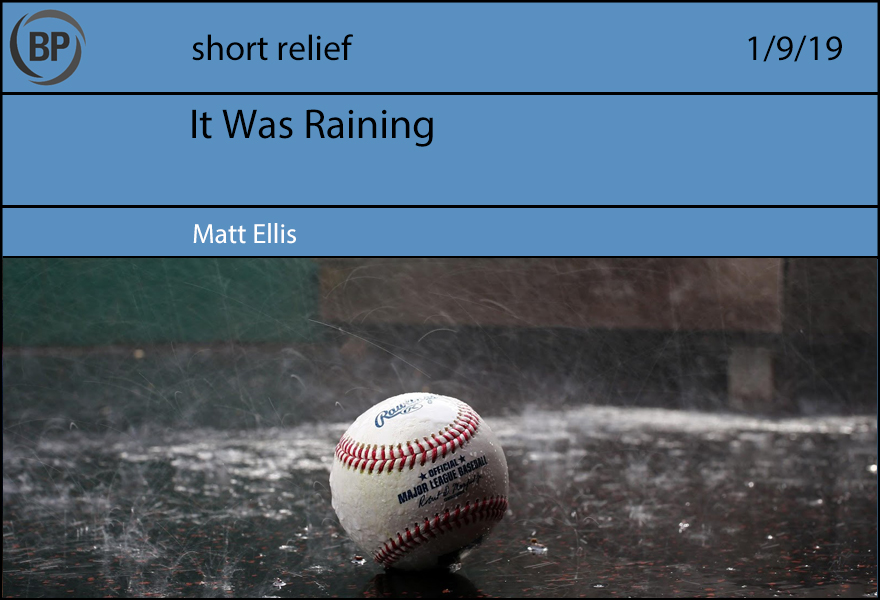 It was raining when he opened the door, and the rain trickled in off his boots and his coat, leaving a little pool down by his feet as he shook it off. He remembered when it used to soak into the gray wool around his shoulders, when they would stick their heads out to see if it would pass or not. But today he had rain boots.

The radio was whispering amidst scratches—something about Czechoslovakia, and democracy. It was difficult to hear amid the squeaking coming from the shopkeep’s rag as he shined the display cases, but everyone in the establishment seemed to be focused, listening, waiting to hear what was happening so far away amid a clearing glass plate.

By the time Chamberlain was reading prepared remarks he had, for the most part, moved out of earshot. He thought about what it sounded like in Game Three, when he scooped that grounder out of the mud and couldn’t get the dirt out from under his fingernails. It’s why the curve didn’t quite land, and why it was soon over the fence. For some reason he remembered the first part long before the result, as if to display a keen understanding that the conditions enabling what is to come were already writing in pen. He could have stopped it then, had he known, had he called for time, had he erased the future.

He took a deep breath and hoped that someone, maybe, would recognize him. But he also hoped he could simply get in and get out, nobody there to rib him for how much money they lost when he was pulled for the last time in his career. He pulled out a few wrinkled dollars and tried to flatten them on the counter before pulling his rain jacket up over his head. He walked out the front door, and the radio was looking forward, not back. 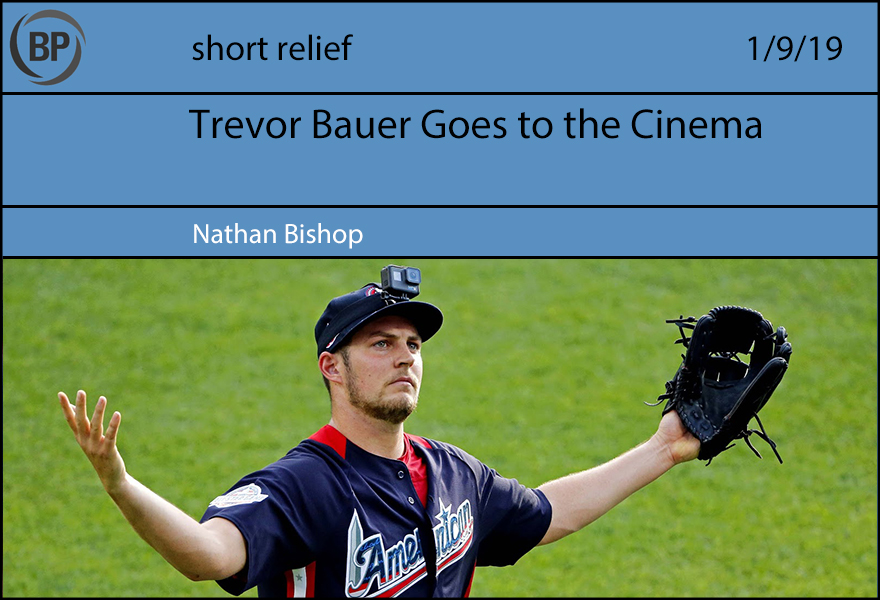 Approximately 18 miles south of what is now known as T-Mobile Park, in a town called Kent, lies a Panera Bread. Across from it is a TOGOS Sandwiches, which is exactly the same as Panera Bread in every respect. Late capitalism may not have singularity of brand, but it will save you walking across the street for a ham and swiss. That, however, is not pertinent to today’s story. What does matter is that also across the street sits an AMC Movie Theater. It is there we find Cleveland Indians starting pitcher Trevor Bauer. Fresh off having some fun online, Mr. Bauer has decided to take in a film:

Movie Theater Employee: Welcome to AMC, what would you like to see today?

TB: The HELL not?

TB: It made a shitload of money! I thought this was a business! Do you not want to make money!?

TB: $533 MILLION dollars, my man, and that’s just domestic. What kind of artsy crap you have going on right now? Like, THE SEVENTH SEAL with no subtitles or something? Yeah I know my Bregman flicks I’m friggin smart I studied biochemistry. That movie is about how being a lone wolf is the only way to live, cuz that way no one is sad when you die. That’s why I’m still single anyway.

Don’t want to hurt anyone when I’m gone y’know? I’m a compassionate guy. What can I say?

MTE: That is… …very… …nice of you, sir. Anyway, we DO have many films showing right now including Clint Eastwood starring and directing The Mule, as well as Spider-Man: Into the Spider-Verse.

TB: Is that the anime one?

MTE: No. It is animated but not an anime, sir.

TB: pppppppppffffffffffffffftttttttttttttttttttttttt maaaaaaaaaaaaaaaaaannnnn for a DORK like you you’d think you’d know that “anime” is short for “animation.” You just said it was animated, too. So, yeah, it’s anime. Don’t argue with me man I got like, spreadsheets taped all over my body under these clothes. Conserves body heat AND I can tell you who had the 5th best pitch tunnel with their change in the AL. As long as I’m in the can anyway. And looking at a mirror. And upside down. Anyway I am super smart, OK?

Wh…whatever you, say, sir. Have you decided on what you’d like to see?

What? Oh, yeah, sure, I’ll take twelve tickets for me and my friends for that Aquaman flick. Whatever.

MTE: Very good sir. Are your friends… …meeting you here?

TB: Oh they’re here, man. They’re just around that corner over there, just out of your frame of vision.