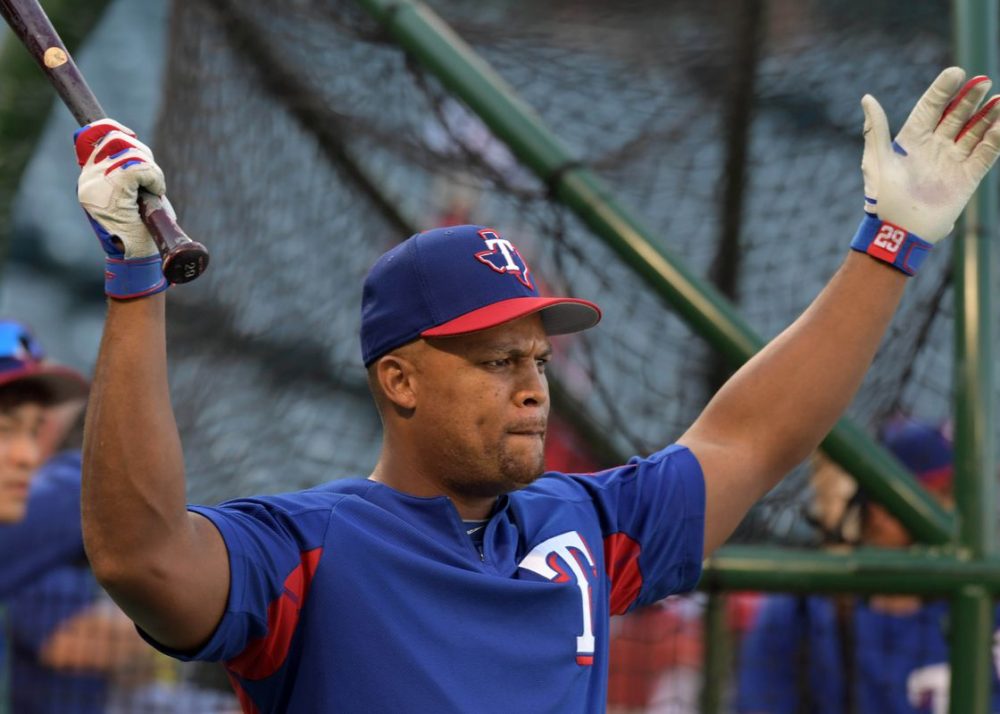 Adrián Beltré will be remembered, of course, for his career accomplishments: 3,166 hits, 477 home runs, 2,759 games at third base. (The later trails only Brooks Robinson, by 111, if you didn’t know.) He’ll also be remembered for his head, his groin, and the on-deck circle. He was as delightful as he was talented.

I will remember him for his thighs.

The cover showed him in the field, tracking the path of a batted ball. He appeared to be moving forward and to his left, judging from the angle of his body, the position of his head, and the direction of his eyes. He was pushing off his right leg, his left leg bent, about to swing forward. 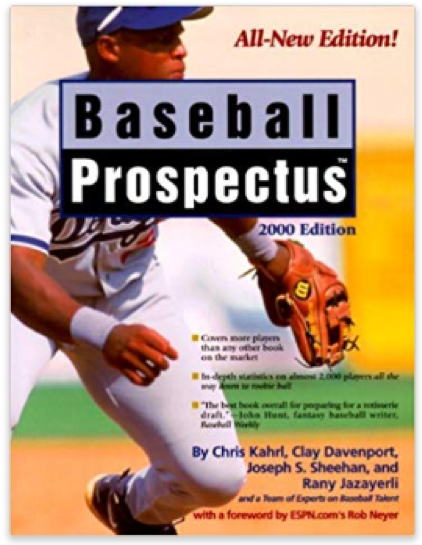 That left leg—we have an almost straight-on view from the knee up, right above the words with a foreword from ESPN.com’s Rob Neyer—well, it looks like a tree trunk. It’s enormous. He’s listed at 5-foot-11, 220 pounds. At least 40 of that must be in that one thigh (and, presumably, an equal amount in the other). Yet he didn’t fit the stereotype of a thick-legged, slow-footed ballplayer. He was 18-for-25 as a basestealer in 1999, and 13-for-15 a decade later. We credited him with +3.0 baserunning runs in 1999, second on the Dodgers to Eric Young, who stole 51 bases. Beltré exuded strength with athleticism. You could see it in his thighs.

We wrote in the 2000 Annual: “Regardless of his age or contract status, he’s on the brink of stardom.” Yes, he was. He regressed a bit over the next three years in Los Angeles, but he went on to win five Gold Gloves and four Silver Sluggers, play in four All-Star games (two as a starter), and receive MVP votes in eight seasons, including 2010-2016 consecutively. All the things that made him fun and lovable, you learned about them after the 1999 season. But the body that produced those hits, those home runs, those fielding plays—you could see that every time you picked up the Annual in 2000. —Rob Mains

For those who pay close attention to the details of baseball, Adrián Beltré taught us something about the nuts and bolts of the sport.

Not all ballplayers wear cups.

Beltré never did, or almost never did, even after he took a sharp grounder by Alexei Ramirez off his manparts in 2009. Right below the Belt-re, if you will. Beltré’s right testicle swelled to “the size of a grapefruit,” he said, which seems like hyperbole; saying it was the size of a baseball should have been enough.

As he recovered from his injury, Beltré wore a cup to make the Mariners believe he was wearing it. It’d be crazy not to, being positioned at third base about 100 feet from danger as he was. But he found it uncomfortable—apparently more so than taking a grounder to the groin—so Beltré stopped. Nuts, right?

The following March after he signed with the Red Sox for a one-season stint, Beltré said he would explore wearing cups during spring training. New team, new deception, because if you closely read what Beltré said, you knew he wouldn’t stick with it.

“I should, but it just doesn’t seem comfortable. I tried to wear it before, but I just don’t feel right. It just isn’t comfortable.’’

The stones on this guy. Alas, he was always more crotchety about someone touching his head rather than his huevos rancheros.

Most casual baseball fans probably assume all or most major leaguers wear cups. Even hard-core fans and reporters infer that most players wear them—at least until we’re reminded of exceptions such as, and like, Beltré. Other stories exist about ballplayers not wearing cups. Anthony Rizzo doesn’t. Ben Zobrist does and is horrified that Rizzo doesn’t. These stories come and recur and we forget about them because, of course, ballplayers wear cups! How could they not? Ever since Little League cup check, these guys have been protecting the family jewels. Only, many of them don’t. It’s hard to say how many. Half? Three-quarters?

It does make sense, if you played baseball competitively and have testicles, that a ballplayer would not want to wear a cup. They are uncomfortable, unwieldy, and constrictive. You can’t possibly run as fast as you otherwise would wearing a cup. Usain Bolt—you don’t see that guy wearing a cup running the 100 meters in the Olympics. You also must lose a certain amount of flexibility. Even if it’s just trace amounts, a ballplayer’s athleticism is their currency.

So is their peace of mind. Competitive sports, where great physical athletes abound, are all about the mental side of the game. That’s where the edge is. Confidence. Trust. Focus. You can’t be worried about how comfortable your balls are when you’ve got to dig in against Jacob deGrom. You don’t want to be tight, you just want to hang loose. So, you take a calculated risk and go without.

You probably won’t get hit in a sack while batting. The geometry is unlikely. Outfielders don’t need cups, unless you’re Matt Holliday that one time. Shortstops are pretty deep in the hole, if you will, but there’s always a bad hop. Pitchers seem to be more vulnerable to line drives at the bean rather than to the beans. Second basemen, first basemen, and catchers, well, a ballplayer would seem to be putting his life (along with future generations) in his own hands. (If you will. Again.) You’d think some sporting equipment genius would innovate a solution here. A protective, non intrusive cup that you don’t realize is there. Until they do, perhaps half of the league or more will go without.

Given the benefit of hindsight, the Dodgers probably regret letting Adrián Beltré walk as a free agent following the 2004 season. Beltré finished second in the MVP voting that year, behind Barry Bonds, posting the best WARP of his career thanks to a .334/.388/.629 line and 48 homers. Before 2004, Beltré was a good enough third baseman, with a .747 OPS, 99 homers, and 10.2 WARP. Locking him up long term, at age 25, should’ve been a no-brainer.

Nevertheless, the ideologies behind free-agent contracts and players entering their primes were different 15 years ago. Beltré’s season was also out of the norm and—as much as analytics has changed over the years—Dodgers general manager Paul DePodesta may have thought Beltré’s season was atypical enough that handing out a massive contract was out of the question. And, to top it off, these were not the free-spending Guggenheim Baseball Management Dodgers, but rather the Frank McCourt Dodgers.

McCourt was infamous for being a penny-pinching owner, among other epithets. Yes, it was a breakout season. Yes, the track record didn’t scream sustainability. But the evidence was clear: Beltré was among the top third basemen in the league, at 25. Seattle ended up signing Beltré to a five-year, $64 million contract. Meanwhile, the Dodgers ended up using 19 different players at third base during those years—the best of that group being Casey Blake, who managed to play 190 games at the position across two seasons in LA.

Collectively, these 19 players were better than Beltré, albeit by 1.3 WARP and in much more combined playing time. Given those numbers, I’d rather had stuck with Beltré at the hot corner. 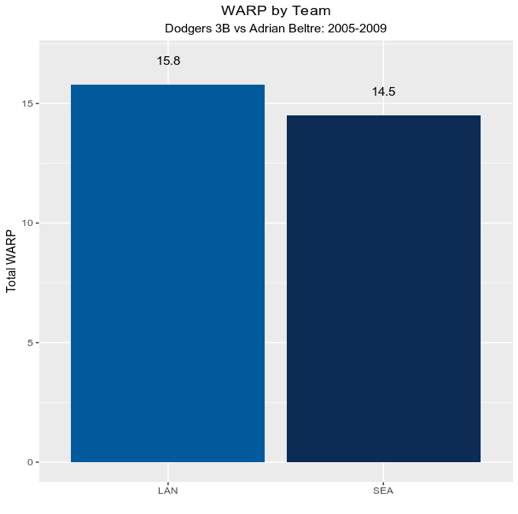 All of this comes from the benefit of hindsight. Paul DePodesta could’ve had his own projections and analysts telling him that Beltré just wasn’t worth having around. Or maybe he was worth it, but DePodesta couldn’t convince ownership to hand out the money necessary to keep him. Of course. Beltré didn’t repeat his 2004 numbers. Perhaps his numbers were affected by the park formerly known as Safeco Field not being—and still not being—hitter-friendly. —Martin Alonso

Yet, we also don’t know what could’ve been had the Dodgers re-signed him. Perhaps he does repeat his MVP-caliber season. Or his career turns out exactly like it did. Now retired, one can only wonder about the myriad hypotheticals on how his career would’ve turned out had he stayed in Los Angeles. But, live and let live.

You need to be logged in to comment. Login or Subscribe
Pat Folz
To be fair, McCourt wasn't "penny-pinching" just to be miserly, he had to be that way because he was massively under-capitalized due to having most of his fortune tied up in a bunch of god damn parking lots and then blowing what cash he and his wife had on jets and massages and a live-in fortune-teller and a private crystal cave and Komodo dragon-riding lessons and an exquisite collection of bejeweled Atlantean cookie jars, and then on their mutual divorce proceedings, instead of paying their employees their contractually-mandated salaries... er..........
Reply to Pat
Pat Folz
Heh, somehow I'm only just now finding out Jamie McCourt is currently the US Ambassador to France. With a legacy like hers, I'm sure our diplomatic relationship is in capable hands.