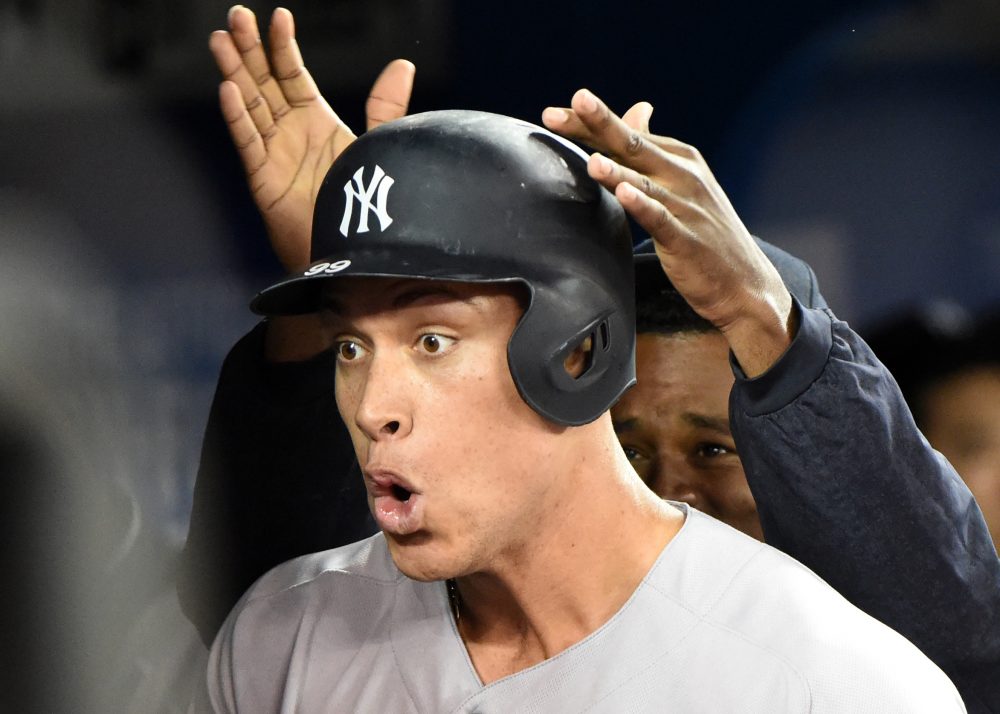 So I searched for some features of 2018 that might’ve eluded you. After all, the season went by quickly, and you were probably busy for a lot of it. Here’s what went on without drawing headlines.

Most Wild Pitches, Ever

I pointed out in this article last year that 2017 set a record for most wild pitches in a season. Here’s what happened this year. 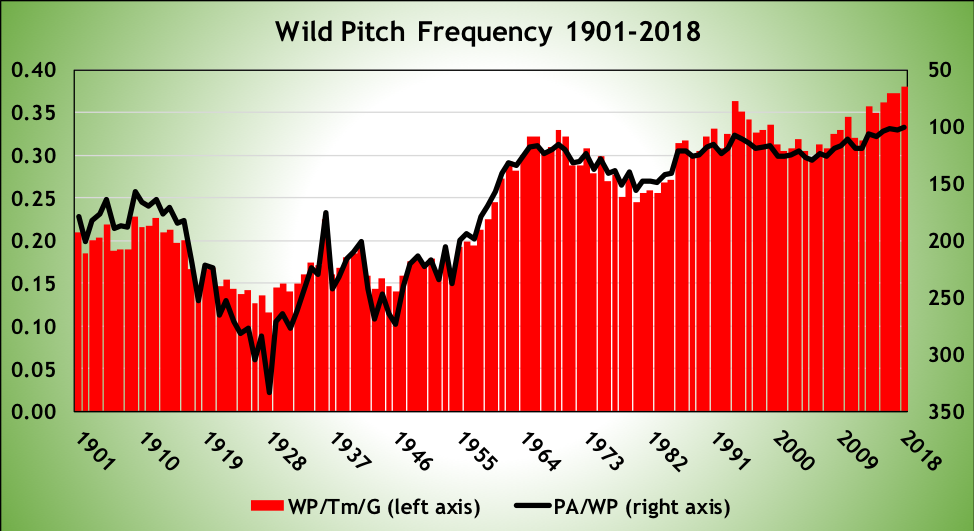 There are two obvious reasons for the increase. One is velocity. It’s harder to catch a 95 mph pitch than an 85 mph pitch. The second is strikeouts. When pitchers get ahead in the count, as they do when they get a strikeout, they target the periphery of the strike zone, trying to get the batter to chase. When those pitches miss, they may wind up by the backstop. That’s also reflected in …

Same graph format as the last one. 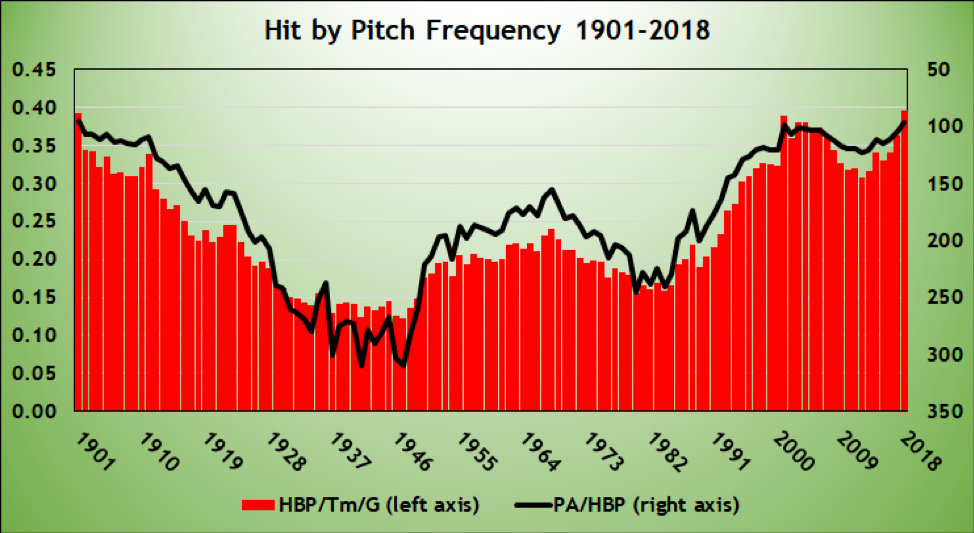 The 10 seasons with the most hit batters per team per game:

Or, if you prefer, the 10 seasons with the fewest number of plate appearances per hit batter:

Look, I’ve been sounding the alarm on this long enough that I’m not going to link to everything I’ve written on the subject, just this opus. Commentators whine about how umpires won’t let pitchers pitch inside, Bob Gibson and Don Drysdale wouldn’t have let batters crowd the plate/hit home runs/showboat without retaliation, pitchers won’t enforce the game the way they should, blah, blah, blah. It’s all crap. Batters were hit by pitches more often in 2018 than in any year since 1901.

My concern has been that with more batters getting hit, with higher-velocity pitches, somebody’s going to get killed. I need to do more research on this, but I may have been overstating that. But the risk of broken wrists and hands and fingers, that’s at an all-time high.

Fewest Errors, Just About Ever

This one needs a little explanation. Here’s a chart of errors per team per game. 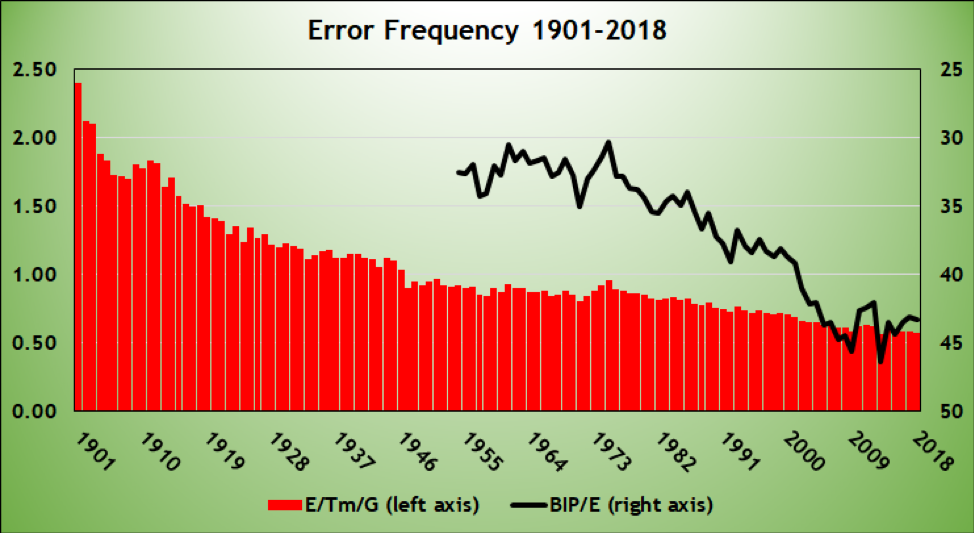 Of the 12 years with the fewest errors per game, the years 2010-2018 account for nine of them. Maybe it’s generous official scorers, but I doubt it. Defenders are more athletic than ever.

If you want to pick nits, though, you could argue those error counts require an asterisk. Yes, there are fewer errors, but there are fewer opportunities to make them. When a batter walks, or is hit by a pitch, or strikes out, or hits a home run, there is no chance for a fielder to make a play. Measured as a rate per balls in play (technical note: balls in play, for purposes of BABIP, consists of at-bats minus home runs and strikeouts, plus sacrifice flies; for these purposes, I’m adding sacrifice hits), 2018 ranks 10th, trailing nine seasons, all since 2006. That’s the black line in the chart above. That’s because while errors are down, balls in play are down, too. (Note that sacrifice fly data go back only to 1954.) 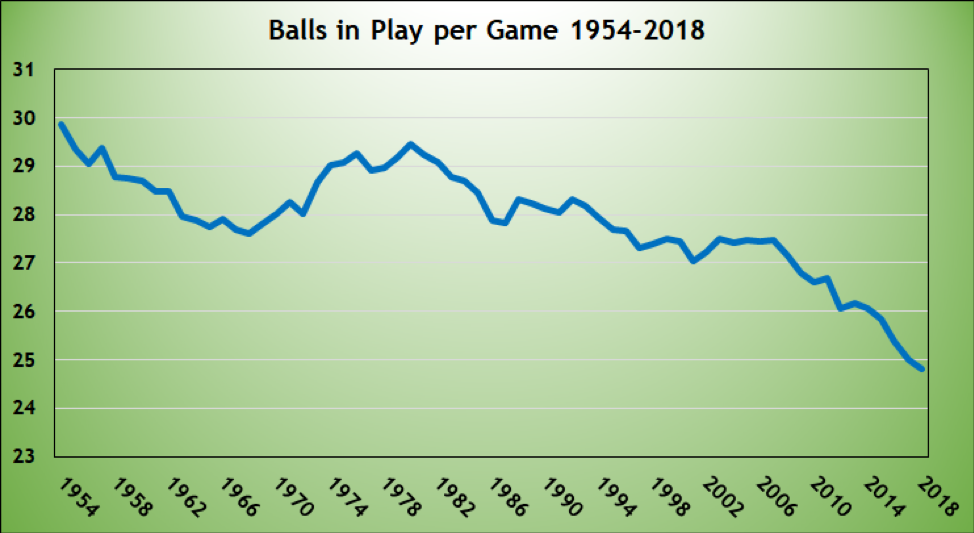 I’m guessing you already knew about this trend. No need to call it out for you.

I prefer the errors-per-game metric to errors per ball in play because you can get errors when there aren’t balls in play, like on errant pickoff throws. And as fans, we’re more likely to count errors by their totals in the box score than as a proportion of balls in play.

As I’ve written, the Rays—well, really, it’s the adoption of The Opener, but let’s blame it on the Rays—have screwed up starter/reliever splits. Last year, I reported on how starters were pitching fewer innings, on average, than ever before, and reliever outings, on average, were increasing.

But, of course, when you have a starting pitcher, by design, pitch just one inning, and a subsequent reliever, by design, pitching five or six, you’re going to unduly exacerbate those trends. So we need new ways to look at this. I mean, I could tell you that the average starting pitcher lasted only 5.36 innings in 2018, the first year in which the average outing was less than five-and-a-half innings. Or I could tell you that the average reliever outing lasted 1.07 innings in 2018, the most since 2008. But given how Openers have muddied the waters, that’s not all that interesting.

So let’s look at it a different way: How often do starting pitchers reach an innings threshold? Ignore those Ryne Stanek starts for Tampa Bay; how prevalent are Jacob deGrom and Corey Kluber (the only pitchers with 20 or more starts lasting seven or more innings) starts? 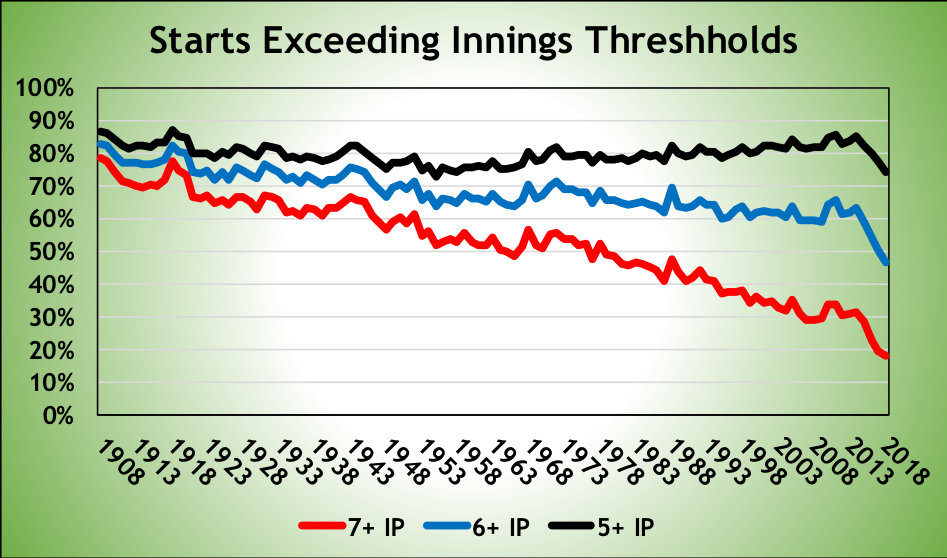 The Sudden Demise Of Quality Starts

Quality starts—defined as any start lasting six or more innings in which the pitcher allows three or fewer earned runs—have long been derided in some circles. Three runs in six innings, that’s a 4.50 ERA! How can you call that quality? Well, in 2018, teams whose starting pitchers had quality starts won 68.3 percent of their games—that’s a 111-51 pace—so they’re pretty good.

And they’re falling off a table. 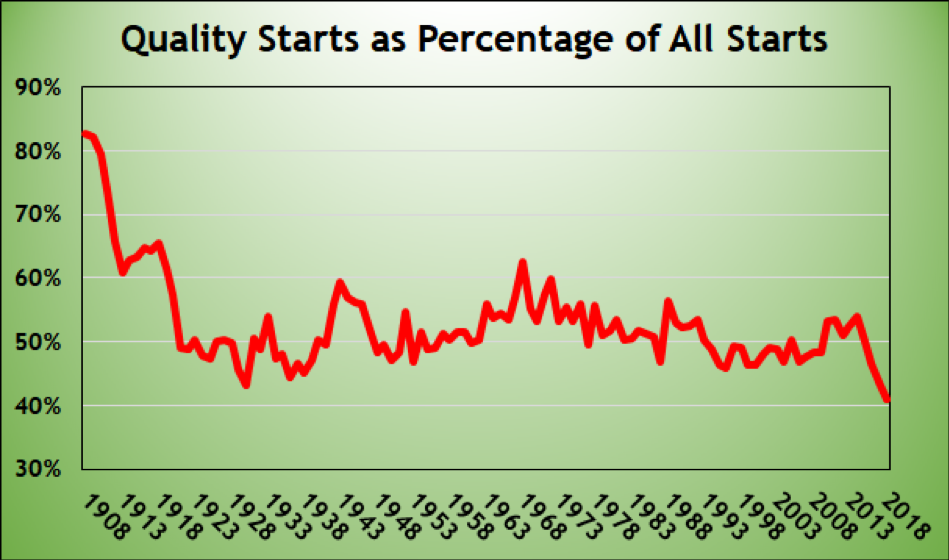 Hate quality starts? Well, it looks as if you’re going to be watching fewer and fewer of them.

Fewer One-Inning Saves, But Let’s Not Get Carried Away

Ever since 1988, when Oakland manager Tony La Russa deployed his closer, Dennis Eckersley, to pitch exactly one inning in save situations, the one-inning save has become the norm. Like most origin stories, this one isn’t entirely true, but let’s not quibble.

And then, the new narrative goes, Andrew Miller was the 2016 ALCS MVP by getting five, six, four, and eight outs in four relief appearances, allowing no runs and striking out 56 percent of the batters he faced. Suddenly, managers thought: Hey, maybe I can use my closer for more than an inning!

This origin story, too, isn’t entirely true. The nadir for pitchers going more than an inning was two years earlier, in 2014, when only six percent of saves lasted more than three outs. It rose to nine percent the next two seasons. And following the 2016 postseason, which featured eight saves of more than three outs (three by Cody Allen, two by Kenley Jansen, and one each by Miller, Aroldis Chapman, and Roberto Osuna), the proportion spiked to 13.6 percent. It rose further, to 13.8 percent, this year. 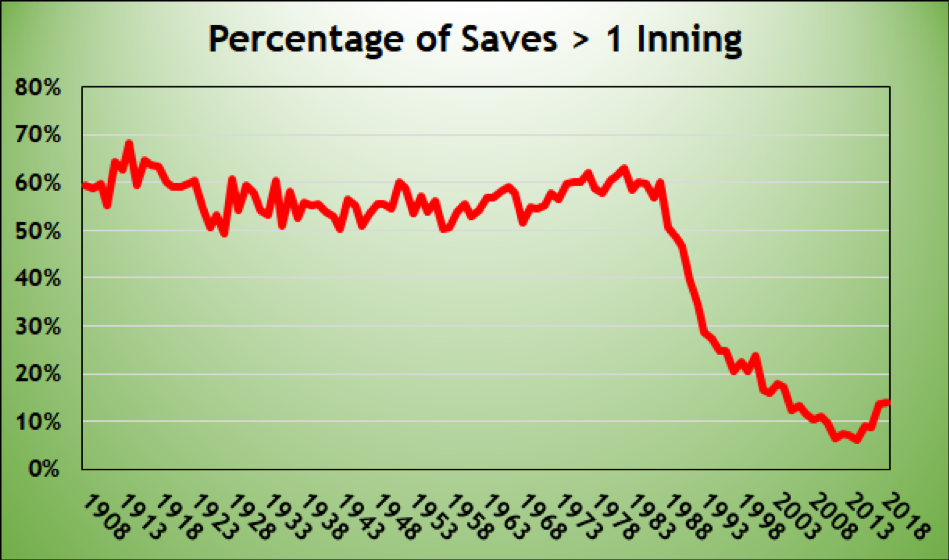 So multi-inning saves are back? Well, hang on. There have been 50 seasons since saves entered the rulebook in 1969. The 2018 season ranks only 37th in the percentage of saves lasting more than four outs. The years with a lower proportion? Each of the years 2005 to 2017. That’s it. Long saves are up, but only relative to the last 14 years.

Oh My God! They Killed Bunting! 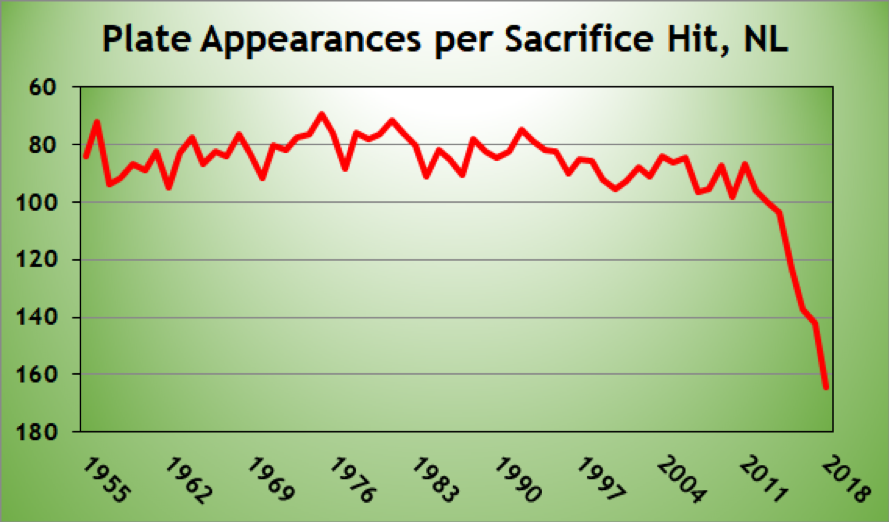 The reason that I’m looking at only National League teams, of course, is the presence of the designated hitter in the American League. This year there were 564 sacrifices in the National League. That’s the fewest since 1960, when there were only eight teams in the league. The math has always been there: This year, teams could expect to score 0.87 runs with a runner on first base and no outs, and only 0.67 with a runner on second base and one out, so why are you bunting?

And no, it’s not because of interleague play. Here’s the American League. Same story. 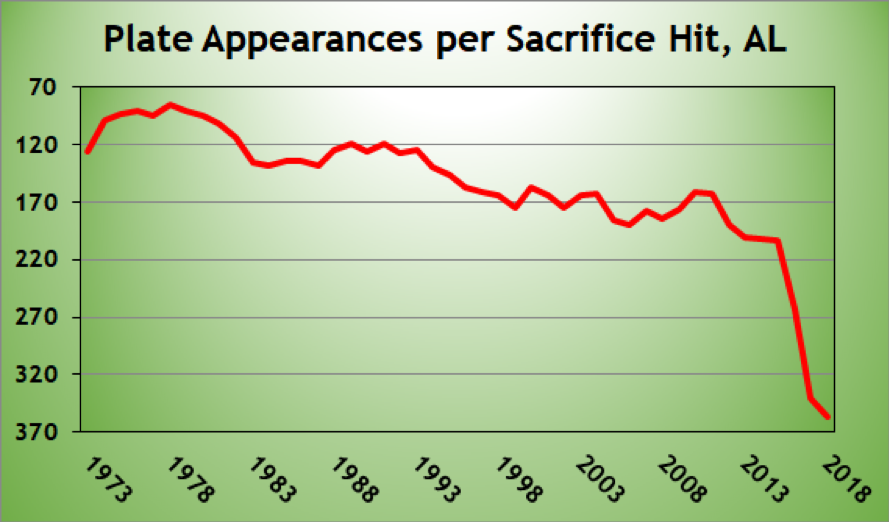 I argued over the winter that maybe we’ve gone too far, and that perhaps pitchers should be bunting more. Obviously, it didn’t happen in 2018. It may not be the best strategy, but man, does it make for some fun graphs.

You need to be logged in to comment. Login or Subscribe
stencil1047
Somebody should show this last one to the Japanese. I went to a game in Tokyo last season and was screaming when the number two hitter bunted over the leadoff hitter. I admit I was alone in doing so.
Reply to stencil1047
Rob Mains
Yeah, American professional leagues seem to be the only ones that've gotten the memo. There's a lot more bunting overseas and at amateur levels.
Reply to Rob
bscheidt
Is there a way of looking at expected runs in the bunting scenario above when it's a pitcher batting versus a regular?
Reply to bscheidt
Rob Mains
Good question. I touched on that a little in the article to which the last link refers. Pitcher sacrifices are down too. Not as dramatically as position player bunts, but they're still down. And as you imply, there is almost no situation in which a pitcher bunt is a bad strategy, given how inept they are, in general, at the plate. You've given me an idea for a research article...
Reply to Rob
bscheidt
Thanks for the response Rob. I read the second article and feel a bit the fool for not reading it before my comment. Very interesting. This is one of the unique and beautiful things about the sport of baseball. The sheer volume of things that happen allows some incredible digging and analyzing numbers that other sports just don't allow. Thanks again and I always enjoy your work!
Reply to bscheidt
Rob Mains
I appreciate it! And don't feel bad about not clicking the links. I put a *lot* of them in my articles.
Reply to Rob
Bruce Sinkula
Curious. What do the numbers say about scoring a run when a run is on 2nd/no outs vs. runner on 3rd/1 out??
I say this because during the NL playoffs I remember two occurrences where there was a lead-off double during a close/late/extra inning scenario...yet no bunting over to 3rd.
Reply to Bruce
Rob Mains
Good question, Bruce. With a runner on second and no outs, teams scored an average of 1.0801 runs. Third with one out: 0.9127 runs. So the sacrifice reduces the run expectancy. BUT---close/late/extra innings changes the calculus. In those situations, you're often looking to just *score a run*, not *score as many as possible*. With a runner on second and no outs, teams scored at least one run 59.57% of the time. With a runner on third and one out, that rose to 65.75%. So, all other things being equal, in a situation where you need *just one* run (tie game, home team batting, ninth inning or later) the sacrifice can make sense. (Link for this: https://legacy.baseballprospectus.com/sortable/index.php?cid=1928919)
Reply to Rob
Bruce Sinkula
Taking this to another level not all 2nd/0 outs C/L/E are created equal. Understandable not to bunt if your 2-3-4 hitters are due up...however, 7-8-9? The time is coming where we punch in the next 3 projected hitters and get a run expectancy. I love this stuff.
Reply to Bruce
Rob Mains
True, but the numbers I gave you are derived from actual game results. So a subset of them are generated with (presumably superior) pinch-hitters for weaker hitters in close and late situations. That lessens the gulf between top- and bottom-of-the-order hitters (and makes projected run expectancies challenging) in those situations. But your broader point is, of course, dead on.
Reply to Rob