In Monday’s Giants home opener, Diamondbacks right-hander Taijuan Walker hit Buster Posey in the head with a pitch in the first inning, forcing him from the game. Posey has been placed on the seven-day concussion disabled list.

I’m not going to link to the pitch here. You can find it easily enough if you want to watch it. I don’t, because I find these plays terrifying. They speak to a concern of mine: That baseball is heading toward another Ray Chapman moment, or something close, and I don’t know what can be done to prevent it.

Admittedly, this is a hobbyhorse of mine. I made a presentation about it at the SABR Analytics Conference in 2016, and I’ve alluded to it in the past. But I’ve never gone into it in depth here at Baseball Prospectus, so I’m going to today. If you’ve already heard my full rant, there’s a lot of other good content here today that you can check out. Have a good weekend and I’ll see you Monday.

I worry about a batter getting killed, or at least seriously hurt, by a pitched ball for three reasons.

Regarding pitch speed, I assume I don’t need to convince you. And, of course, the up-in-the-zone pitch (i.e., closest to batters’ heads) of choice is the four-seam fastball, which is also the fastest pitch in pitchers’ arsenals. The pitch that hit Posey was a 94.2 mph four-seamer.

Batters were hit last year at the 12th-highest rate since the American League was formed in 1901. There have been only 31 seasons during which batters were hit more frequently than once every 125 plate appearances: Every year from 1901 to 1911, and every year starting in 1997.

Somebody’s going to look at that and say, “Well, duh, pitchers are being rushed to the majors before they learn the strike zone,” to which I’d reply, “You’ve been watching too much Tyler Glasnow.”

Walks, in fact, are near a postwar low. Pitchers today have outstanding control. That’s not why they’re hitting batters. The reason, I’d posit, is strikeouts. No, really.

Let me give you an example. You know who leads the majors in hit batters over the past three years? Chris Sale, with 41. Sale, of course, is a fantastic pitcher, who both strikes out a lot of batters and limits walks. His 5.7 K/BB ratio was second to Clayton Kershaw among pitchers with at least 500 innings in 2014-2016. 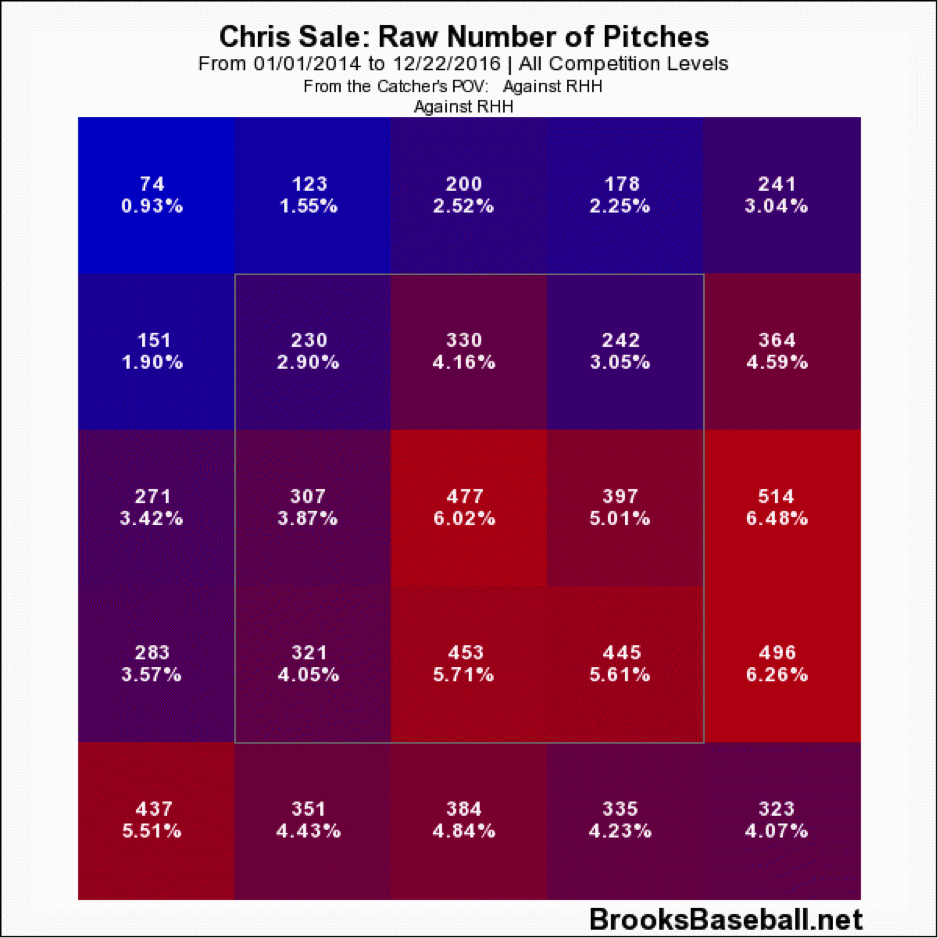 Those five squares along the left side are the ones closest to right-handed batters, the ones where there’s a possibility of a batter getting hit. Those five comprise 15.3 percent of Sale’s pitches. 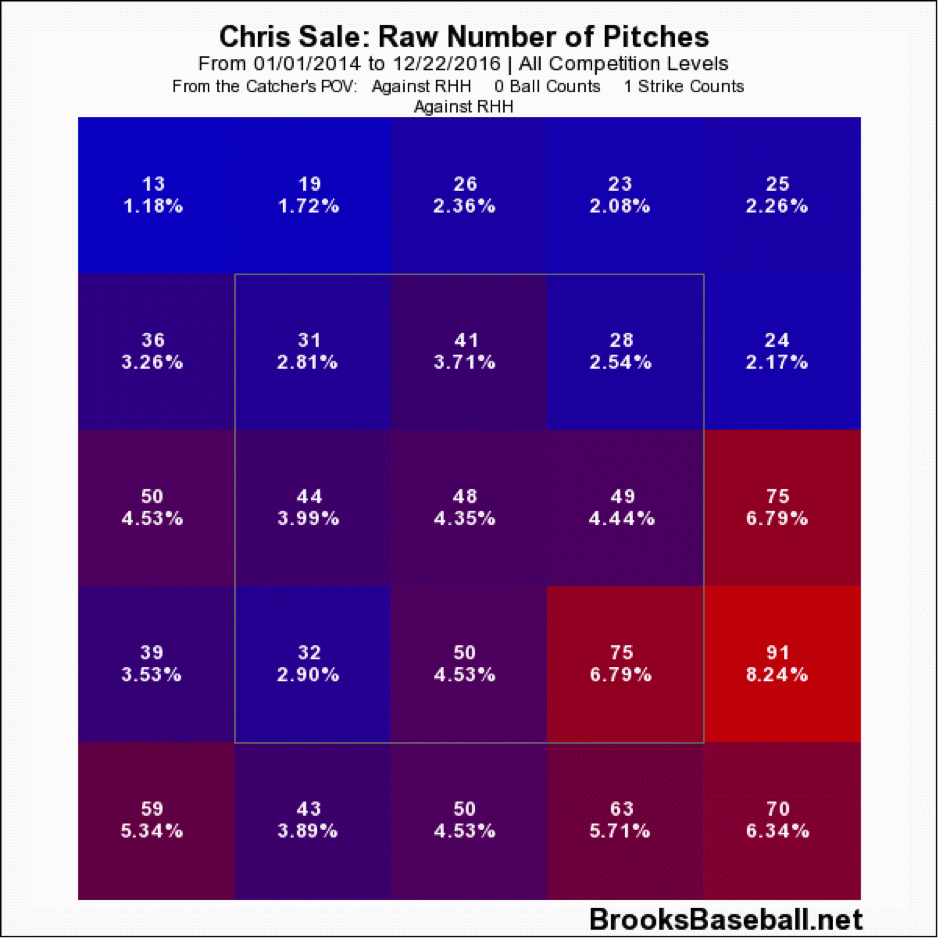 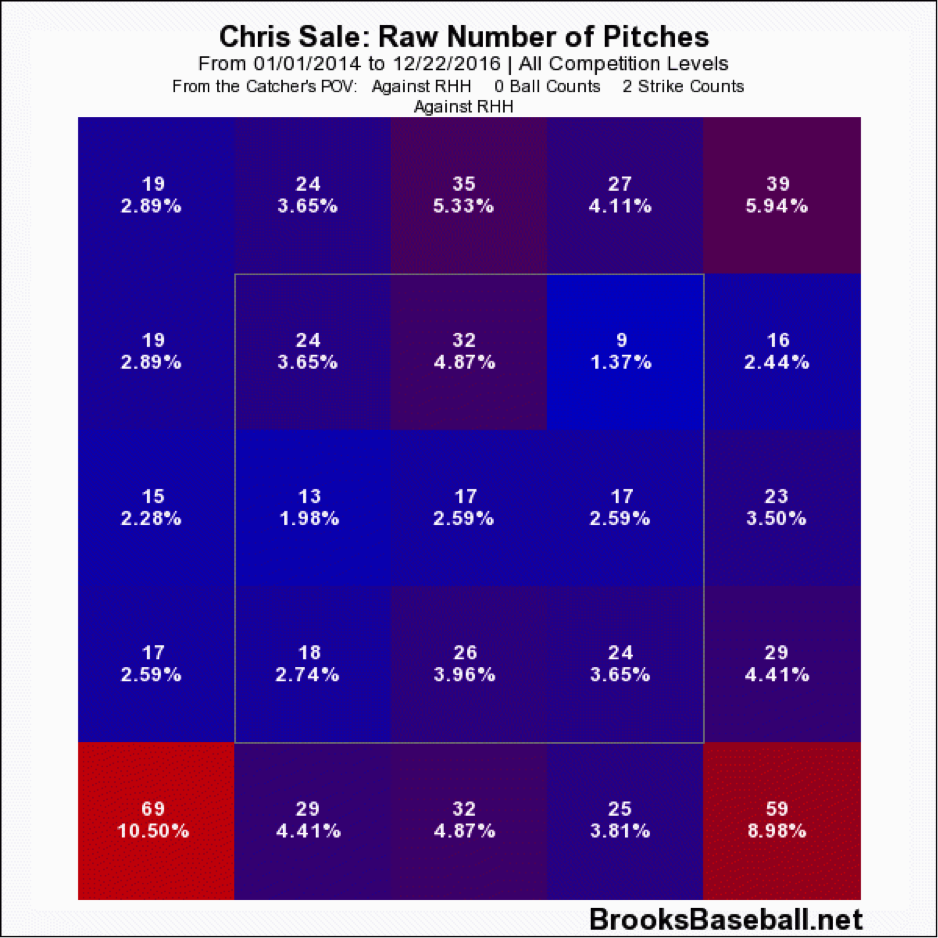 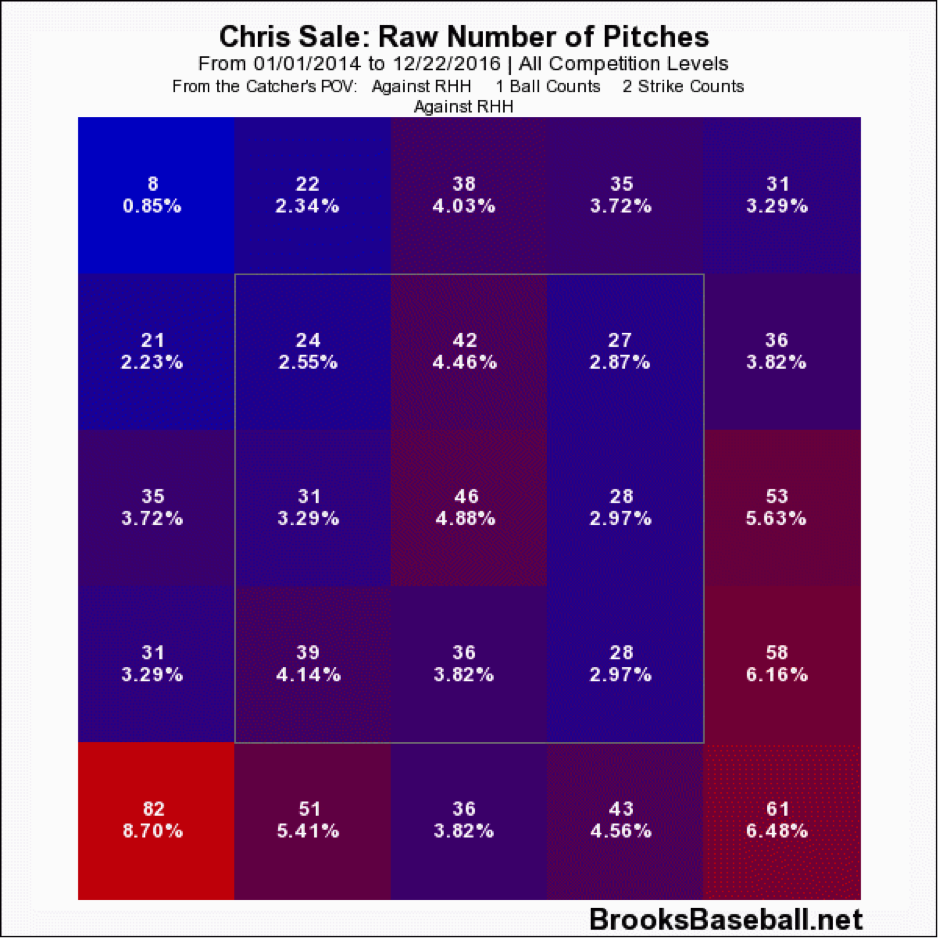 The percentage of Sale’s pitches along the left-handed side of those heat maps, where there’s HBP risk, are 17.8, 21.2, and 18.8, respectively. All told, when Sale’s ahead in the count, he’s out of the strike zone and inside on 19.0 percent of his pitches. When he’s not ahead, that proportion drops to 13.5 percent.

So what’s going on? Why is Chris Sale over 40 percent more likely to throw a pitch that’s inside when he’s ahead in the count?

Well, it’s not hard to figure out. When pitchers are behind in the count, they try to locate in the zone in order to avoid a walk. When they’re ahead, they work outside the zone in order to induce the batter to chase, generating a whiff or weak contact. I’m oversimplifying a lot, but the basic idea is that pitchers play along the margins of the zone when they’re ahead in the count more than when they’re behind. And when you’re at the inside fringe of the zone, and you miss, you might hit a batter.

As you can see, a batter is 2.7 times more likely to be hit when the pitcher’s ahead in the count than when he’s behind.

To this point, I think this is all pretty intuitive. But let me tie that into strikeouts. Strikeouts are up, of course. They’ve risen in each of the past 11 seasons, and there’s been a new all-time record set nine straight years. In most cases—55 percent of strikeouts last year—they’ve occurred when the pitcher’s ahead in the count (0-2 and 1-2). And as strikeouts have risen, pitchers have been ahead in the count a lot more. Here’s the breakdown since 1990: 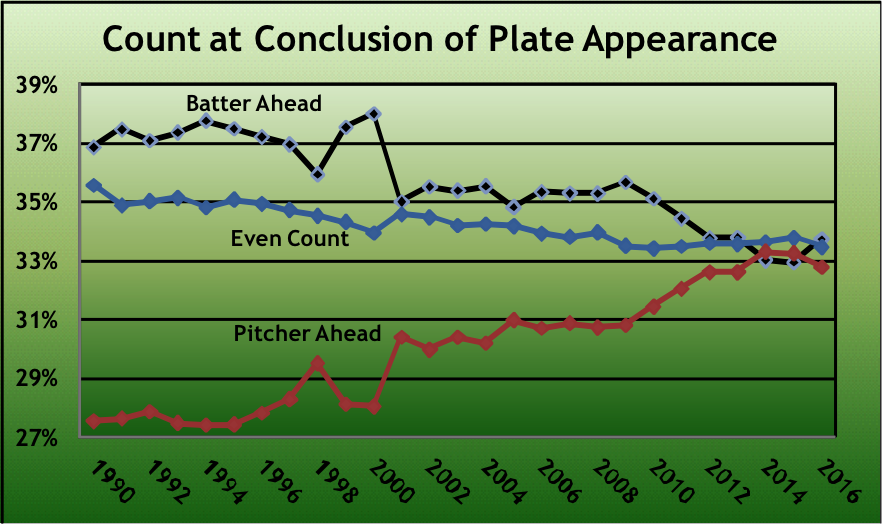 In 2014 and 2015, for the first time in history, plate appearances ended with the pitcher ahead in the count more often than hitter. That trend receded a bit in 2016, but the difference was still the third-smallest in history. (Granted, we don’t have pitch count data going back very far, but I feel pretty confident saying that we’re seeing historical extremes, given the relatively recent spike in strikeouts.)

So the problem isn’t that pitchers are trying to hit batters, or even that the rate is much different, once you take count into effect. It’s that with strikeouts rising, an increasing proportion of plate appearances are occurring on counts when batters are likely to be hit. The strikeout scourge is putting more and more batters in harm's way, and with pitchers throwing harder and higher, the harm is becoming potentially cataclysmic. This is a real problem, and I don’t know what the solution is.

Thanks to Rob Neyer for coining the term “strikeout scourge.” I really like it. Thanks to Rob McQuown for providing data for this analysis literally faster than I could ask for it.

You need to be logged in to comment. Login or Subscribe
Junts1
This is interesting, in particular because it reminds me of another set of articles on BP 10 years ago.

10 years ago, after a series of sobering events regarding pitchers hit by comebackers, Will Carroll spent a substantial amount of time on the topic of catastrophic injury to pitchers hit by line drives. This was a few years after Bryce Florie had probably the most gruesome incident of the sort in modern memory, but there had been a series of other injuries (and we know that they have continued since, including some serious incidents such as Brandon McCarthy).

Will was particularly concerned about lower-level players with aluminum bats and inflated exit velocities. He spent a bunch of time writing about and advocating for a pad that would be inserted into pitcher's hats since the pitcher is more vulnerable in several ways than the batter:

While we've seen some serious incidents, we haven't seen what Will feared - the death of a pitcher due to a liner directly to the face or head. McCarthy's injury (from which he returned!) and Bryce Florie's (from which he did not, due to damage to his eye) remain the most visible, horrible examples of this risk. But it has changed nothing.

With Trackman data we now know that guys like Giancarlo Stanton and Corey Seager hit line drives 10-15 mph faster than any pitcher can throw. The odds may be lower, but its still impossible to believe that one of those line drives to the crown of the forehead or temple of a pitcher without protection couldn't be lethal.

But it hasn't happened at any level to my awareness. Similarly, there have definitely been more HBP to the head in modern times than I ever remember watching baseball in the 90s and 2000s. Posey isn't even the only one this year! A guy missed no games and is playing with a broken nose!

I wonder why it is that despite the rise in balls to the head, we have not seen a rise in serious injuries on those balls. Is it improvement in helmets (baseball benefitting from helmet technology pioneered to protect football players?), luck or something else?

The statistical reality you lay out is a real thing. And so was the risk that Will laid out. But McCarthy's fractured skull is probably the worst incident since that date, and he made it back to shut out the Cubs last night.

Reply to Junts1
mainsr
The Shoemaker injury last year was terrible, too, and he's pitching again this year. But to your point, yeah, I think it's been a matter of luck. May 7 will the 60th anniversary of the Gil McDougald liner that effectively ended Herb Score's career, and that was to his face, where no helmet would have helped. This year's the 50th anniversary of the Jack Hamilton fastball that effectively ended Tony Conigliaro's career, and that hit him in the face, where no helmet would have helped. (Well, maybe the one with a flap, like Jason Heyward wears, would have.) I really fear that we've all been lucky--players, executives, and fans--and when the luck runs out, it's going to be tragic.
Reply to mainsr
Junts1
I do understand that position. I also wonder if there's another effect we are missing because with both of these phenomenon, and so many collegiate and professional games, you'd think the statistical probability of something having happened by now is quite high.

There's got to be some kind of offsetting factors we aren't picking up on.
Reply to Junts1
Grasul
Really good and interesting article. I don't know the answer either.
Reply to Grasul
jdeich
A wrinkle that will be hard to resolve: How many of those HBPs were intentional? Those are more likely with the batter tied (0-0) or ahead in the count, which skews the data. No manager is going to signal for the "message pitch" ahead 0-2.

1.Sale may pitch inside, but when he does so it is overwhelmingly down, minimizing the risk of serious injury.

2. Hitting a batter is a bigger penalty for the pitcher when he is ahead in the count, so pitching inside, counteracting the benefit of pitching aside. It would be interesting to analyze how big an advantage there really is to pitching inside
Reply to newsense
mainsr
One of the solutions I've heard proposed (and, admittedly, haven't really thought about) is to award two bases for a hit batter. That would change the cost/benefit.

I hope everybody realizes that I used Sale as an example because he leads the league in HBP, not that he's a headhunter or anything.
Reply to mainsr
buddha
Is there any way to look at the *height* of hit-by-pitches, and if they are changing over time? How about pitch type?

As mentioned above, Sale has a higher HBP frequency, but given his location distribution, I'd venture to say "most" are to the lower body and at lower speeds.

This may be a way to look at the anecdotal feelings that more HBPs are happening at the head area and at greater speeds, which is the real concern.

This is a really interesting question that is above my pay grade in terms of data extraction--there's a reason a about half my articles include thanks to Rob McQuown here for research help--but this may be my next request of him.
Reply to mainsr