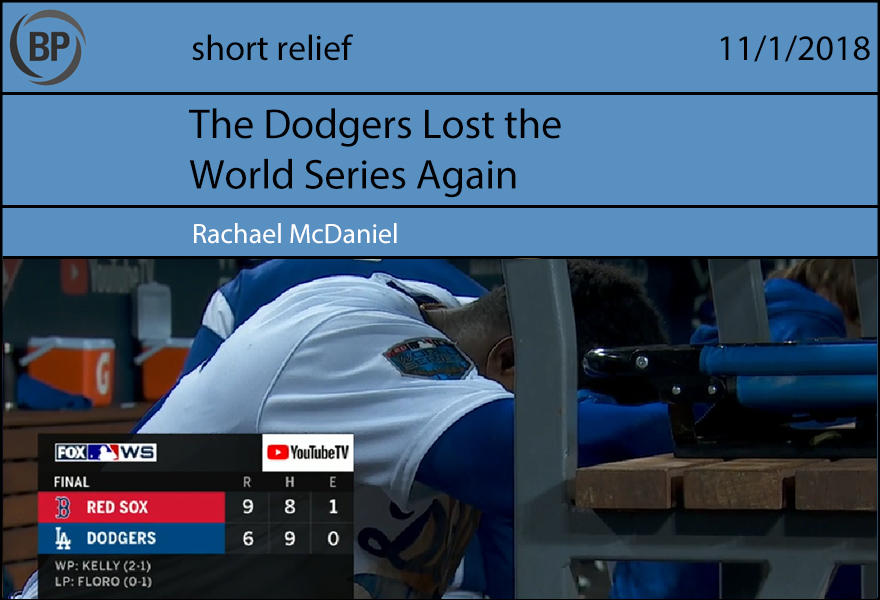 Last season, the Dodgers lost the World Series in the early days of November. They lost after drawing the series out to its full seven games, wringing every ounce of drama and emotion they could out of it — so much so that the defining seventh game was itself anemic, drained of any real conflict. The Astros won easily. It felt wrong. The loss should have been upsetting. But after the first two innings, the outcome of the game had already seemed determined. By the time the game was over, then, the disappointment had settled into me enough that I didn’t feel much of anything at all. In that numb, half-realized emotional state, I put on a sweatshirt and went to the beach, dark and cold and completely empty of people, with a bottle of cider and my laptop. I sat there and drank and wrote my essay for the BP Annual, my fingers stinging with the cold.

This season, the Dodgers lost the World Series again. The series itself was much worse than last year’s, in terms of entertainment. Three of the games, including the final skirmish, were much like that seventh game of last year’s World Series — undramatic, one-sided, overlong. But the third and fourth game were different. Game 3 was, of course, the beautiful eighteen-inning mobius nightmare. But Game 4, which had appeared to be a one-sided victory for the Dodgers, ended up being as big a disaster as I’ve seen this team participate in.

It was pounding rain as Game 4 ended. I was on recap duty, but before I sat down to write, I went out for a walk. And as I powered down the street, the streetlights glaring in my eyes, barely feeling the rain hit my face, I realized I was angry. I was angry that the Dodgers had, at the very moment when it counted the most, frittered away a lead they’d never failed to hold during the regular season. I was angry that Yasiel Puig’s big moment had been tainted, that Rich Hill’s great start was all for naught. I was angry at Ryan Madson, and Kenley Jansen, and the entire parade of relievers who had extended the catastrophe.

Even just a month ago, I didn’t want to write about baseball anymore because I couldn’t make myself care. The part of me that cared had been buried by the part of me that was going to kill myself. What does a playoff race matter when you’re not going to live to see the World Series? But I lived to see the World Series. I made it through another entire year, in spite of everything. I don’t remember much — but I wrote about all of it, somehow. I left behind evidence that I was alive. I hung around long enough to see the Dodgers lose the World Series again. And I hung around long enough to feel angry about it.

The rain stinging on my face, my hands freezing, I felt very, very happy to be alive. I went back inside and wrote my recap. 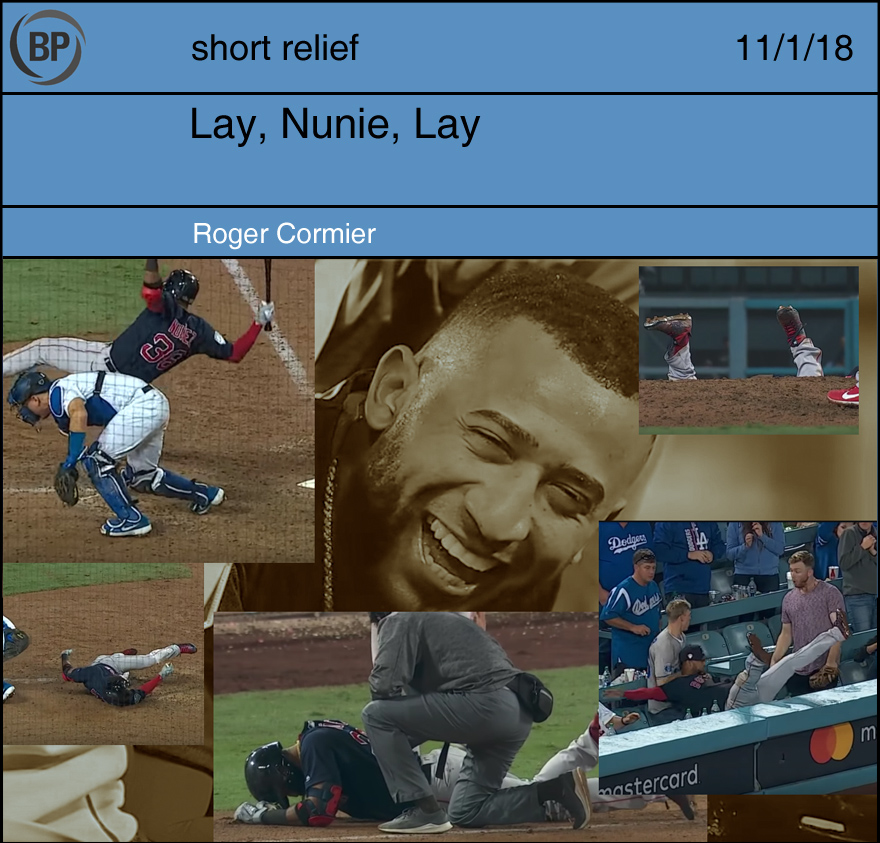 Eduardo Nunez exclaimed the above after taking a slider to the stomach earlier this season, according to his manager Alex Cora. Cora was telling tales out of school a few hours after the Red Sox won the World Series the other day on MLB Network. Since Nunez survived the “death scare”, and the 13th inning of That World Series Game Which Would Not End, it was okay to talk of his sacrifices. Good for a grin and all.

“You’re not gonna take me out. Please don’t take me out!” Nunez pleaded to the skipper after the first incident, per Cora. “I can’t take you out,” Cora explained. We’re out of players.”

They had the same back-and-forth moments later.

“Nunie’s” wild ride reminded me of someone in a baseball rec league. He would collapse to the dirt when he got the slightest bit hurt, often at first base, and just… lie there. I think sometimes he just fell to the ground when he hustled his way to the bag and was called out by an inch or four. We never explained his predilection to hug the floor to any newcomers. It’s only now I’m realizing those people must have thought the rest of us were the most cold-blooded bastards on the planet, ignoring a man who had given his all and possibly just suffered a heart attack, lying on the ground while we continued to play baseball. Eventually those newcomers would figure out the deal and become as cruel and unfeeling as the rest of us.

The Dodgers might have been annoyed at the theatrics in the 13th, but then Nunez didn’t bother trying to score from first on a double, making it obvious he was legitimately hobbled a bit. Then the Dodgers tied it and were busy focusing on trying to win the ridiculous contest they were trapped in.

The rec league regulars too didn’t mind after a while. It helped that Ronnie Reposing tended to stay parallel to the field just in foul territory, so he wasn’t potentially delaying the game.

I got annoyed once at someone who homered and then took his sweet, sweet time walking around the bases. And I do mean walking. Our team had to guess, out loud, why he was doing this, before coming to a consensus by the time he was halfway between first and second it was because he was plunked, obviously by accident, maybe 40 minutes earlier. Even his own team thought this stopped being funny by the time he touched second base, but he was committed to his stroll. The next batter was waiting. So was the pitcher. As was I, the catcher in this story.

I don’t remember much of an argument. Paulie Pettypants just got to third when the next at-bat began. The count was 2-1 when Patrick Perambulator got around to touching home plate.

Nunez did not break an unwritten rule like Moses Mosey, in a postseason where so many were broken you would think there is an actual written piece of literature about the rules. Maybe he milks his pain. I say he earned this right. Let the kids gobble up some scenery.

Get your rest, Nunie. On a comfortable mattress this time around, covered in sheets with a high thread count. 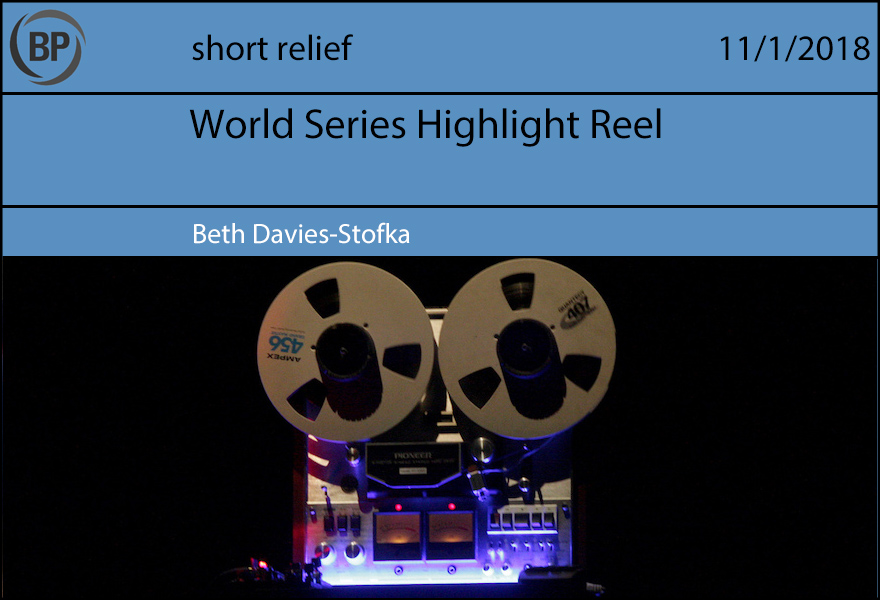