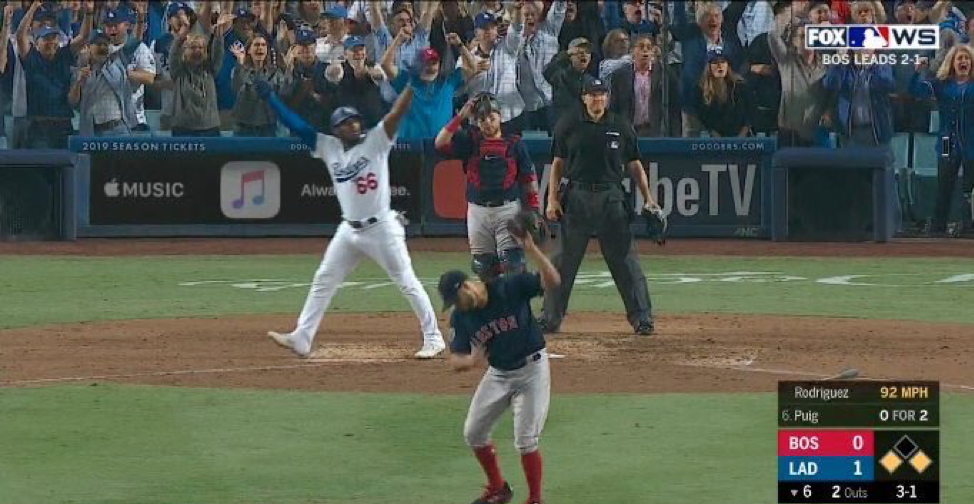 For one shining moment, Yasiel Puig was very, very happy.

Alex Cora had left Eduardo Rodriguez in too long. To be fair to Rodriguez, the fact that the inning had continued to the point where he was pitching to Puig was not entirely his fault. An intentional walk of Manny Machado to load the bases with one out had come mere inches away from paying its intended dividends.

Cody Bellinger rolled over a pitch, grounding it to first base; Steve Pearce fired home with ample time to record the force there. But Christian Vazquez’s return throw bounced off Bellinger’s shoulder and rolled down the line, allowing a bewildered Justin Turner to scamper home, scoring the game’s first run. There were now two on, two out.

And instead of lifting the left-handed Rodriguez, deep into his third time through the Dodgers order, with the right-handed Puig at the plate, Cora left him in. He put his faith in Rodriguez’s overworked arm and in Puig’s struggles against lefties this season. Five pitches later, Cora’s faith was rewarded not with the quiet out he wanted, but the opposite: the deep, satisfying crack of a no-doubter coming off the barrel.

Puig dropped his bat straight down, lifted his arms straight up, both fingers in the air. He leapt around the bases, blowing kisses to the stands, flexing for the cameras, an exuberant smile practically jumping off his face. He was giddy. This is the moment all professional athletes hope for, the moment that for many never comes: the one shining moment when the story hinges around you. When it’s you who takes control of the story. When all the numbers fall to your power.

It is not unreasonable to think that this might have been the greatest moment of his life.

The Dodgers were the only team in baseball without a loss after leading by four or more runs this season. They were 54-0. Thanks to Puig, they carried a four-run lead with two outs in the seventh inning of Game 4 of the World Series. Ryan Madson, who blew leads in both of the Dodgers’ previous losses this series, who had allowed every runner he’d inherited to score, was on the mound. He’d recorded one out, at least—that was more than Scott Alexander, who came in to relieve a note-perfect Rich Hill and walked the one batter he faced, had been able to do.

Mitch Moreland came to the plate to pinch-hit. Madson’s pitch was a changeup. Madson’s changeup is his signature pitch. His changeup was the pitch he’d been curiously hesitant to throw during the two disastrous outings in Boston this weekend. The changeup he threw to Moreland was a deathwish: it floated, high and inviting, over the middle of the plate. And again, with two on and two outs, there was that sound: the deep, satisfying sound of a no-doubter coming off the bat.

And instead of rounding the bases with joy, arms in the air, into a waiting thrall of celebrating teammates, Puig stood alone in right field, the ball sailing over his head.

There were many contributors to the Dodgers’ historic meltdown. You could name every single one of the parade of relievers who came in after Hill made his exit, and you would be right. You could name Dave Roberts, and you would be right. Ryan Madson, Kenley Jansen, Kenta Maeda, and everyone in between. The batters gave it their best shot. Kike Hernandez hung two runs on Craig Kimbrel in the ninth inning. But it wasn’t even close to enough.

The Dodgers’ record with a four-run lead goes to 54-1. Instead of a 2-2 series tie, they find themselves down 3-1. One of those 1s is impossibly large, and one is far too small. They will have to be perfect, or at least close to it, if they want to avoid a repeat of last season. But the Dodgers have not often shown themselves to be capable of anything even close to perfect this postseason. The closest they got was Puig, who has appeared in more postseason games than any Dodger in history, who literally put his life in jeopardy to get to this moment, his arms in the air, in the bottom of the sixth inning. The farthest was everything that came after.

And from the stands or from home, gripped by the tension or just seeking some distracting entertainment, we watch baseball give people everything they want. We watch baseball take it away.

Yasiel Puig was on deck when Cody Bellinger flew out to end the game. He would have represented the tying run. As the final out was recorded, and for several long moments afterward, Puig stood, shaking and silent, his face in his hands, in the Dodgers dugout. 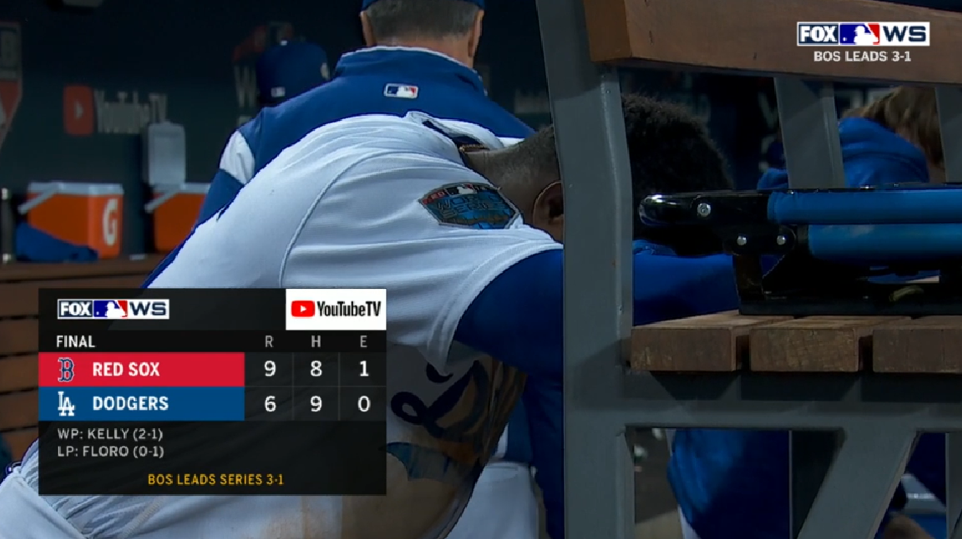