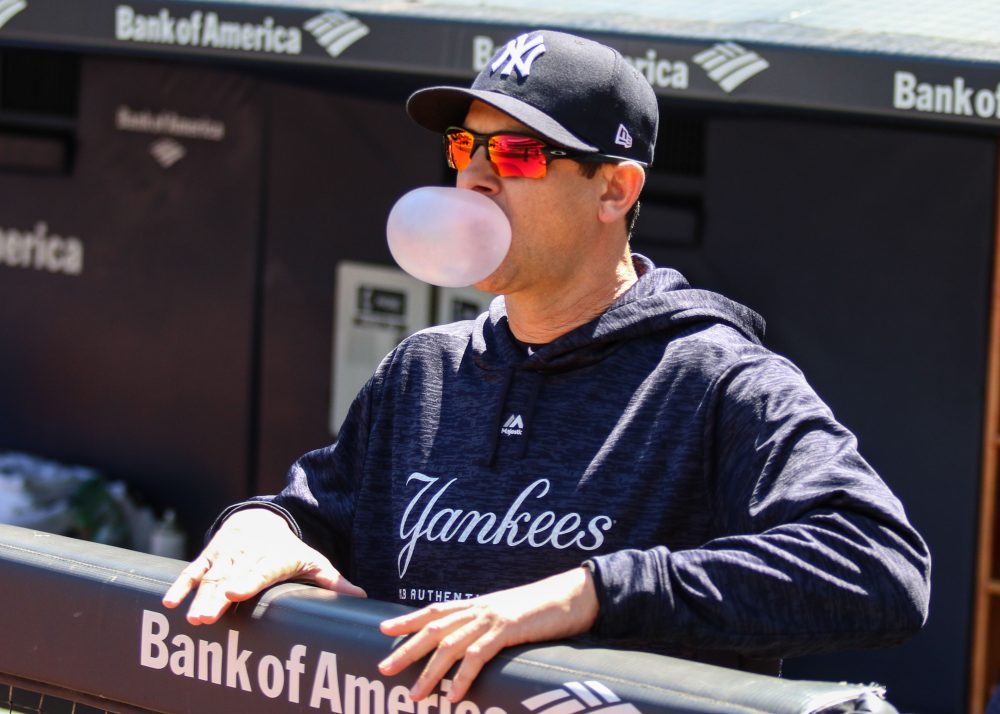 The rumblings began shortly after 8:35 p.m. on the East Coast. A few loud cracks of Boston bats, some murmurs, and the faint hint of something deeper. Listening. Listening harder. Was there trouble approaching for Luis Severino and the Yankees?

Bullpen should be stirring at this point. Severino is getting squared up.

By 8:41 p.m., when Xander Bogaerts stroked a two-strike single with one out in the third inning, there was general agreement. Something was happening. A dull, sickening roar could be heard in the Bronx.

Approximately 22 minutes transpired between the collective realization of the crowd and the moment Yankees manager Aaron Boone, out of earshot but all too visible, began making outward efforts to prevent disaster for his club in ALDS Game 3. Only seconds after that, it became apparent he would be swallowed up.

The most basic ingredient for a real, major avalanche is a fresh layer of snow, and weight, to stack on top of the usually sturdy base that hugs the mountain, overwhelming it and causing the whole heaping mass to go sliding downhill.

Whims of the universe. This storm on top of this mountain. Don’t be in the way.

Monday night a storm blew in to New York in the form of Brock Holt. And also, to a lesser extent, Rafael Devers and Christian Vazquez. Injected into the Red Sox’s lineup somewhat unexpectedly by manager Alex Cora, they formed more than a simple flurry. Their contributions piled on top of Mookie Betts and Andrew Benintendi and company and reached a critical mass of sorts. The whole shebang broke loose and turned into a 16-1 Red Sox rout, and an upper hand in the only remaining Division Series, in front of a dejected Yankees crowd.

Everything came together in just the wrong way for some unlucky seekers of higher ground, higher achievement. It happens. The trick is to recognize the danger and avoid a deadly error. As National Geographic will tell you, 90 percent of avalanche incidents are set off by the victims.

Instead of mitigating the dire nature of his circumstances as the wall approached, Boone waited until Severino had loaded the bases in the fourth inning before turning to a relief pitcher. More baffling, he didn’t look to someone with experience navigating this sort of daunting situation. He summoned Lance Lynn, a starter by trade and one with a 4.77 ERA this season, to take on the top of the Boston order with zero wiggle room.

The bottom layer of snow, the slab, that’s the most dangerous part. Soon, it overwhelmed Lynn. Betts walked, Benintendi doubled in three runs, and the roar gave way to a silence that may have been even more terrifying to those who heard it. What could have been a jam in the fourth inning of a three-run game turned into a seven-run storm.

Yankees mop-up man Stephen Tarpley‘s wild pitch behind Jackie Bradley in the eighth, which allowed the Red Sox to score their 13th run, was a 400-pound branch plummeting into the abyss. Holt’s solo homer to complete the cycle—off of Yankees backup catcher Austin Romine—felt like disaster tourism, a postcard from the scene.

Still, what errors the Yankees made, and the damage they suffered, emanated from that slow reaction to the oncoming threat.

In the heightened state that is October baseball, Boone seemed to pull a regular-season lever when it was time for a postseason one—leaving his ace in to work through the bottom of the order despite repeated loud contact. It’s possible a competitive game could have been salvaged even after that, had Boone actually stuck with a different bit of convention from the summer: Using strikeout-heavy bullpen arms to escape tricky situations.

Chad Green ended up entering only after Lynn’s foray into high-leverage relief had gone terribly wrong. He wound up throwing 29 pitches in vain with than 24 hours to recover before the Yankees must stave off elimination.

Red Sox starter Nathan Eovaldi, meanwhile, afforded Cora’s bullpen a night where no high-leverage arms needed to work. It’s not necessarily as big a deal as it sounds—just as a 19-8 demolition in Game 3 of the 2004 ALCS did not dictate the victor of the series. It simply added to Boston’s advantages on Tuesday and, if need be, Thursday.

When both the roar and the dreadful silence had passed, and meandering assessments of the damage filled the air, the TBS broadcast unwittingly illustrated just how fast these things can hit if you’re not vigilant.

We didn’t run the interview with Aaron Boone because it was all about Severino.

Throughout the evening, first-base umpire Ángel Hernández was living through an avalanche of his own. Each call was inevitably disproven by a cursory replay. Each judgment immediately curious, then dubious. Without the assistance of replay, a series of coin flips between the first baseman and runner might have produced more accurate results.

There will be criticisms (or worse) lobbed at Hernandez and Boone. Incredulous observers will wonder aloud how in the world they didn’t see this coming. How they were so blind as to miss that sign or the other dead giveaway.

The points will be valid. These are the sorts of self-inflicted chain reactions that nightmares are made of. They are also the sort that sometimes mean nothing, that work in spite of themselves or in coordination with an ever-so-slightly different set of circumstances. By week’s end the whole thing could be viewed as a learning experience or a strength-building trial.

Or it could still be a disaster. For now, the winds will continue to swirl overhead.

You need to be logged in to comment. Login or Subscribe
richard carter
I hate to say it but this write-up is a bit too cute for me and I am not a Yankee fan.
Reply to richard