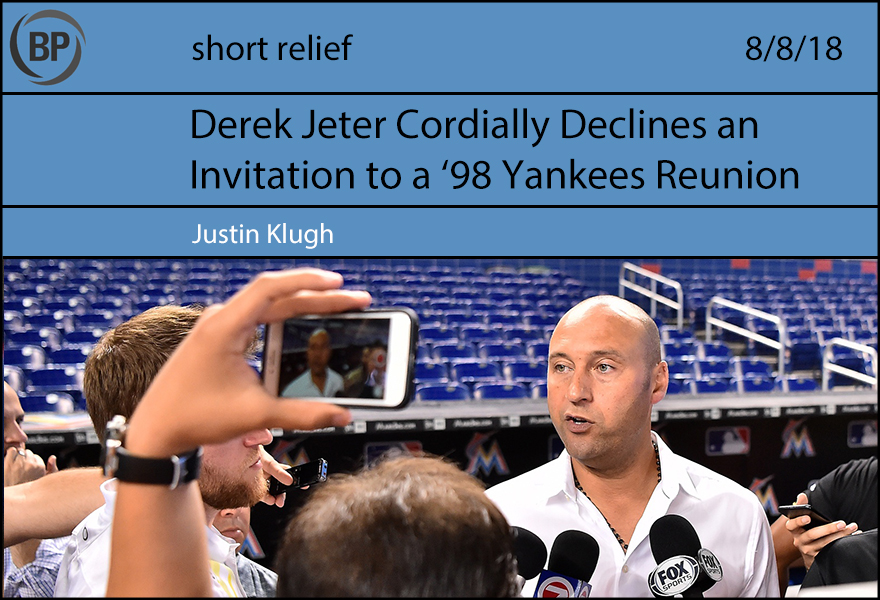 Wow. Twenty years already! The time really flew by, didn’t it? Feels like just yesterday we were watching me invent the Jeter Jump Throw to nail Travis Fryman in the ALCS, laughing with each individual member of the press (never understood why people thought the writers were so prickly!!) and then hitting the town for free meals in the most expensive back rooms on the planet, followed by an after-hours stop at the local sex grotto just to see who’s around.

I know we’ve all been busy with our post-playing careers, me moving seamlessly from MLB player to MLB owner, and the rest of you with all of your own little pursuits. I’m sure you’ve been hearing a lot of rumors about what’s going on down here in Miami and I can assure you that, yes, it’s all true—we are having the best time! Stories about fans lining up at a microphone to insult me in public are wildly misconstrued. I have a firm understanding of how to run an MLB franchise. I could just use a ‘Derek Jeter’ of my own! Ha ha.

Anyway, I received my invitation to the reunion of the 1998 team like the rest of you, and I’ve seen that a lot of you have agreed to attend. It’s so amazing that you all have lifestyles that permit you to just drop everything and attend an event like this! For me, two decades of endless praise feels like enough, but I suppose the rest of you could use a little more attention. I’ve had quite enough, thanks! 😜

So, sadly, I must decline my invitation to return to Yankee Stadium. I suppose we all know what this means: That the event will be canceled entirely, or at least postponed until I am able to make it. In a way, I understand. What even is a 1998 New York Yankees Reunion Celebration without the man who made it mostly possible? We all know how critical it was to our success that I become the first person, ever, to jump and throw a ball at the same time.

Sure, I miss New York. Its parks. Its restaurants. Its speakeasies for millionaires. Deciding on a whim to go catch a concert, see a play, or give lost tourists purposefully wrong directions in Central Park and then mugging them while laughing and saying that no one would ever believe them. The way the filthy, street-walking peasants disappear beneath the clouds when you look down on the city from the glass cube, suspended hundreds of stories in the air, in which you live. But those days are over. And, frankly, we all need to accept that.

My advice? Find a new city. I certainly did. Part of me wonders why I wasn’t down in Miami sooner. The concierges, architects, bouncers, and purveyors of illegal human-hunting ranches are just as cordial and open to new ideas as those in New York—and there’s no winter! Imagine me making that play to get Fryman, only without an autumn chill in the air! It makes it that much better to recall, doesn’t it?

Best of luck to you all! Let me know if any of you make it down to the ballpark in Miami. I’ll send you down some classic South Florida-style nachos! I don’t think they’re “just stale tortilla chips with a line of Cheese Whiz across them” at all. You can Venmo me the $27.95. 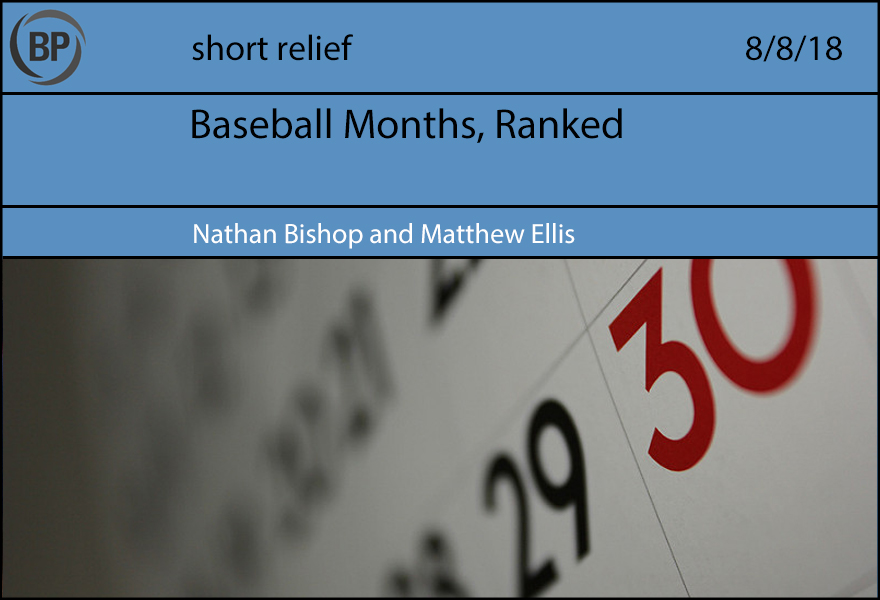 [Editor’s note: After a brief (three-minute) Twitter conversation today, Nathan Bishop and Matt Ellis decided to fight each other to determine what the best baseball month is. Blood was spilled. Let’s see where the blows landed:]

Nathan: Foundationally, my rankings are based on one underlying truth, and that is that baseball serves humanity and America best as a concept. The promise of its coming helps comfort us through the ravages of dark, family-time-filled winter days. Its imminent departure fills us with a winsome pining for what has come before, a healthy examination of time, mortality, and death.

In between, when the game itself blooms full before us, we treat and consider it as yet another easily consumed and thus easily disposable distraction. Thus, the following:

Birth. New Life. Consummation. Renewal. A slate wiped clean. The longer we live, the dirtier we become, the more the idea of starting over holds appeal. “If only I could do it again, I’d get it right.” This is the promise of April, of Opening Day. Like most of our thoughts and ideals, it is folly. Our team will, again, be bad. But in April, foolishness and hope are allowed to freely cohabitate without judgment. In April, all is love.

The end is many things to many people. It’s a chance to buy playoff tickets or watch the debut of your team’s minor league phenom. If you’re a Mariners fan, it is simply the end, and given what the season can do to the Mariners, that’s truly as good as anything.

Ah yes, stats. By this time, They Count. Any self-respecting Baseball Prospectus reader would never be caught DEAD citing numbers form the pitiful, microscopic, single-celled sample sizes of April and May. Yes, ahaha, aha, ha, it indeed, aha, does appear, aha, that Trevor Story will NOT hit, .440 this year. Mwah. Pass the caviar.

Speaking of small sample sizes, as a Mariners fan I honestly have no idea what this is like. But it certainly looks like everyone on my television is having a wonderful time.

The baseball month you always forget about, at least until it’s January 8th, you haven’t seen the sun in six weeks, the children are gnawing away the legs of the dining table, and you remember a time when you felt warmth or anything at all. Then, and only then, the phrase “pitcher and catchers” lights within you the faintest flickering of hope.

The month of baseball microaggressions. The All-Star Break. All-Star Voting. The Final Vote. People who care about any of these things, even a little tiny bit. These thin, shallow rakes across the baseball season, when performed by hundreds of thousands (25 times a day! Click to enter for your chance to win a Reached-First-on-a-Swinging-Third-Strike Canyonero!), bleed the inertia out of the season. No more All-Star breaks, no more All-Stars. Either everyone is a star, or no one is. Viva la revolucion.

The most apt description of baseball, and all of life, in August is this: 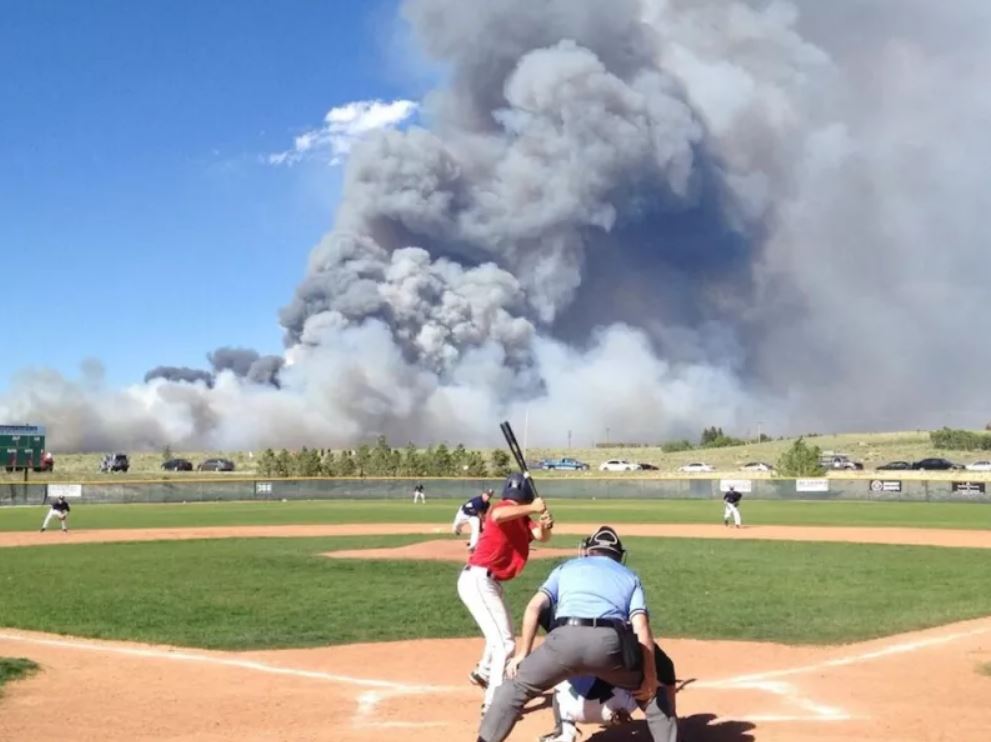 Our trivial game, our joy, our recreation has gone on too long. The fire is hungry. It must eat before winter, and the rains, and the long dark, and the call of “pitchers and catchers” sparks once again to mind and heart alike.

Matt: Hmm. I have to admit that this is interesting, but I fundamentally disagree with my colleague Nathan here—namely, for his optimism and faith in America as a concept and humanity in general. Most of us eat meat, and that means that we take one look at a very cute little animal—named, perhaps, Daisy—and we TOSS THEM ON THE GRILL AND BOIL THEIR BLOOD UNTIL THE MEAT IS CRISP AND CLEAN. We are monsters. So, without further ado:

August is the Nietzsche of baseball months. You spend April believing, May mapping, and June mathing. And when you arrive in August you know precisely what’s going to happen by season’s end—and more often than not it’s a depressing realization that you’re a speck of dust in a field of other dust particles, faceless, nameless, lost in the winds of time. I think this is precisely what makes baseball the most beautiful sport man has ever devised: it does not care for your feelings, and, in fact, later dumps them in the toilet.

April is fine, mainly because you spend so much time wanting fun baseball in the offseason. I personally watch some Ken Burns baseball and suddenly find myself rooting for Charles Ebbets to build Ebbets Field so the Dodgers can play before remembering he’s been dead for 93 years, and also he was probably an insane wacko, what am I thinking? I don’t care, give me old-timey piano and magic-hour sunsets to convince me baseball is more than just fun. April is the best; let’s go.

As a lifelong Mariners fan, October rules because I can, like, stumble to the bar with my friends and it’s the seventh inning of a Blue Jays/Athletics game and Jeff is like DUUUUUUUDE DID YOU SEE THE FIFTH INNING HOLLLLLLLLLY CRAAAAAPPPP!!! and I can go “heh, yeah man it was um……it was wild” and then order another drink. I hear there is a more enjoyable way to experience baseball in October, but who would know? I am a fan of the Seattle Mariners.

May is good because it’s the first point when rabid optimists start to realize they believe too much, but also its far enough away from the real consequences that pessimists aren’t worth listening to. These are the real Kierkegaard days, when baseball tells you something about human existence.

I don’t know what September baseball is like but I bet it’s fun. It’s also gotta be stressful—and you don’t even get the excitement of the trade deadline. Also you go back to school. SCHOOL! SCHOOL’S OUT FOR SUMMER, said Alice Cooper, and that’s who I take my cues from. Outta here.

Nobody watches baseball in July. As you rightfully point out here, Nathan, that’s why they put all this boring junk in the month to convince people to watch the game. Convince me otherwise.

Nathan:Matt, your rankings are……OK. I would like to posit a theory.

Nathan:We are, ostensibly and declaratively in this article, fans of the Seattle Mariners, yes?

Matt:This is an incredibly loaded question, but I suppose my answer is ostensibly, after much thought, yes.

Nathan: Is it not then possible, given this declaration, and preponderance of experience both lived and measured, that in fact all baseball months are equally bad?

Nathan: As Nietzsche says, “To live is to suffer, to survive is to find some meaning in the suffering.” To that, I say, “Go Mariners.” So say we all?