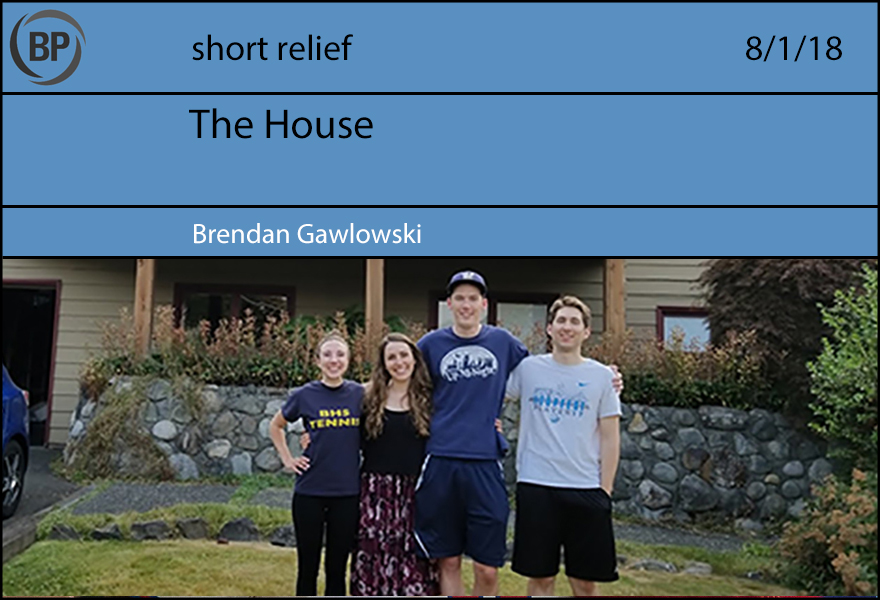 Yesterday, I left my home of two years. Like any move, this one was physically and mentally draining. That we scheduled our departure for the hottest weekend of the summer didn’t help.

The emotional toll proved even more taxing. This was a house where I grew immensely as an adult. It was here that I grieved over the death of my mother. Where I overcame my reflexive hesitation to Make Big Decisions and proposed to my girlfriend. Where I pursued my dreams in baseball and made peace with the idea that they may always flutter out of reach.

It was also a home where the four of us broadened the friendships that tie us together. In two years, we never fought over the shower, the garbage or the laundry. Chores were mostly done promptly and no one left for the store without checking to see if others needed milk or a Nerds Rope. In the darkest hours, it was a place where you could get a hug without ever letting on that you needed one, and where I’ve laughed as hard as any man ever has. I’m hopelessly sentimental and nostalgic; I knew how tough this day would be six months ago.

And yet it was time to move. My girlfriend is now my wife, and while the bonhomie in our group never dissipated, all good things come to an end. As Branch Rickey said, it’s better to trade a man a year too early than a year too late.

When my wife and I pulled out of the driveway, we stopped for a moment and stared at the house. A light in the garage illuminated the familiar beige walls and red trim, the enduring manifestation of two years worth of memories. It’s a place we love dearly—and one we probably won’t ever step inside again.

The end of a lease is a funny time. Technically, we have the run of the place until tomorrow, the strange opportunity to enter now or never again. I want, and crave, the inverse: to leave quietly for the evening and forever retain the freedom to return.

Felix Hernandez hasn’t been right in three years. It is painfully clear that his arm no longer has the strength or the magic that made him special, a point grimly emphasized by the vacant expression and resounding sadness of the man reacting to his last outing.

As he answered reporters, Oakland won again and Seattle’s once formidable lead in the Wild Card standings slipped to two games. The Mariners, saddled with the longest playoff drought in major American sports, are on the verge of extending their streak in an agonizing manner.

For a certain breed of fans—the ones who fully embraced their ace during the team’s 15 year romance with mediocrity—the damage may yet be greater. For years, Hernandez was the only player who punctuated lifeless Mariners ball clubs. He adorably (and bizarrely) expressed a desire to win in Seattle, signing not one but two contract extensions on the eve of his free agency. Mariners fans have long dreaded the possibility that Hernandez may never pitch in the playoffs for the team and the city that he loves. The only way to compound the sadness of this team’s potential collapse down the stretch would be to make Felix the face of it.

For all the hand-wringing, Felix Hernandez will make his next scheduled start. I wouldn’t say that I want to see it, but I do want to watch him forever. 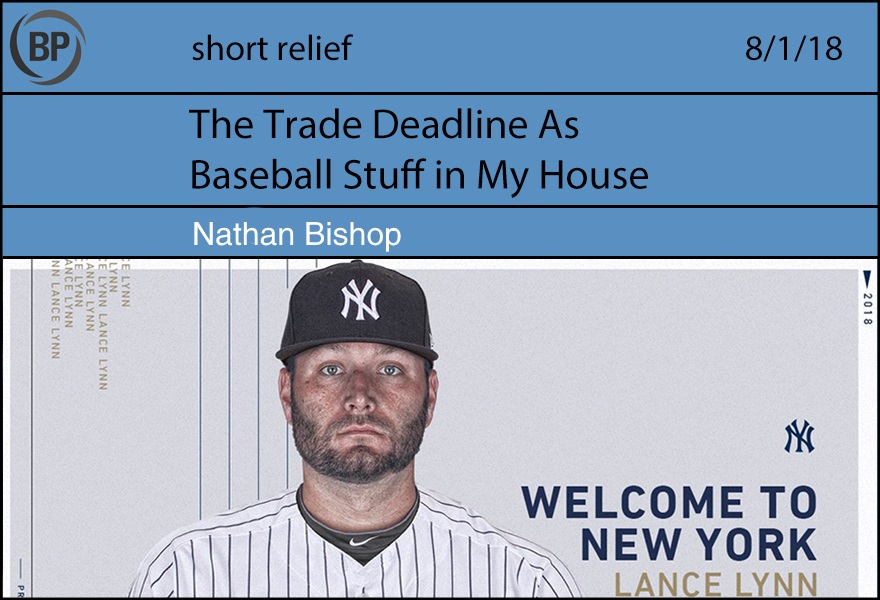 Baseball Prospectus, and its readers, have spent literal decades cultivating a reputation and appetite for nuanced, informative, balanced, and insightful analysis of the sport. In this article you will find precisely none of those things. Instead what you will find is an analysis of several deadline transactions, as represented by objects lying around my home. Please enjoy. 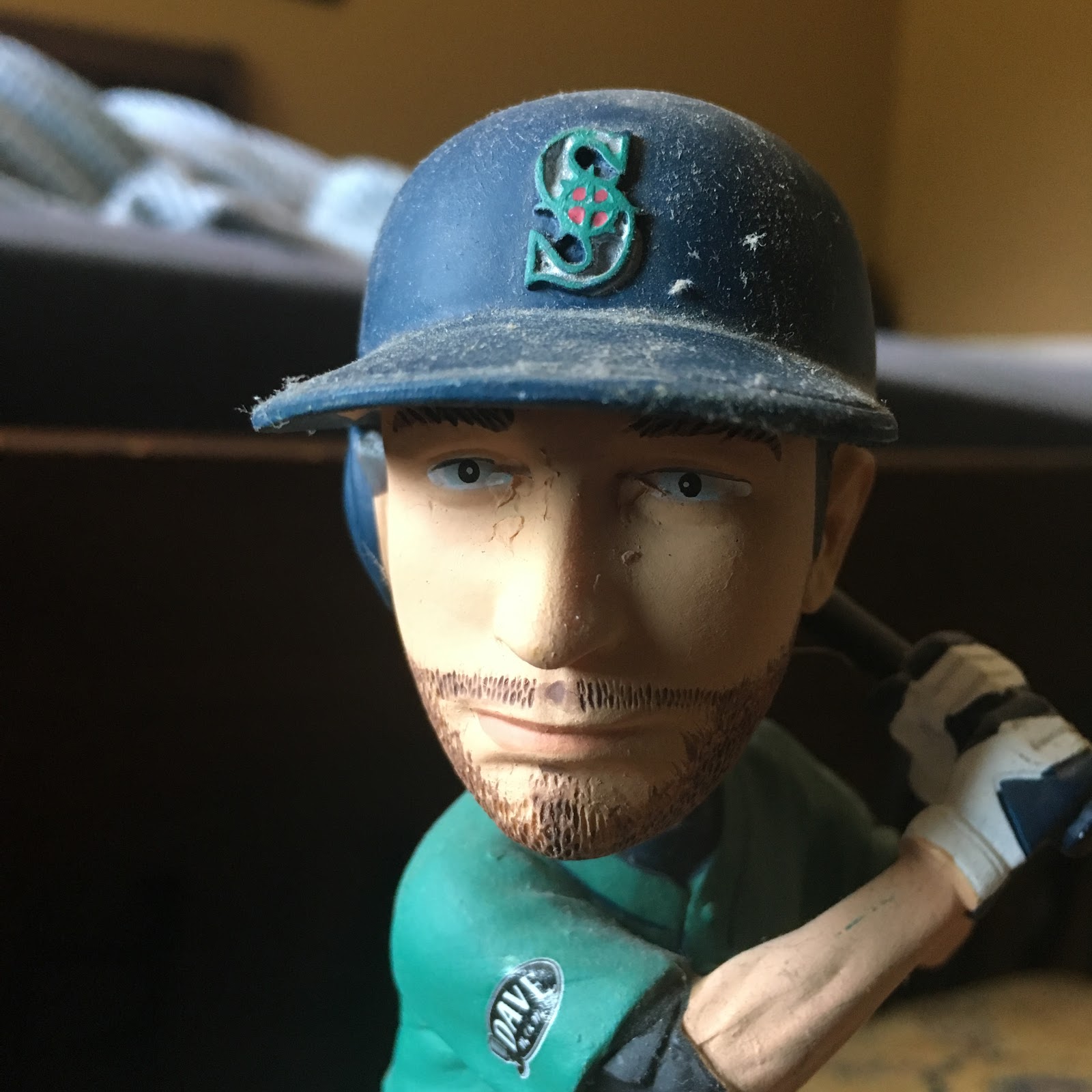 Baseball’s most recent offseason was a devastatingly depressing look into where Moneyball’s Quest for Efficiency has led the game, and few pitchers suffered more than Lance Lynn. Originally thought to be in line for a contract between $50-$60 million dollars, Lynn settled for a paltry $12 million in Minnesota. His eyes howl in pain, in loss, in emptiness. Their silence screams, much in the way of my Dustin Ackley Bobblehead. 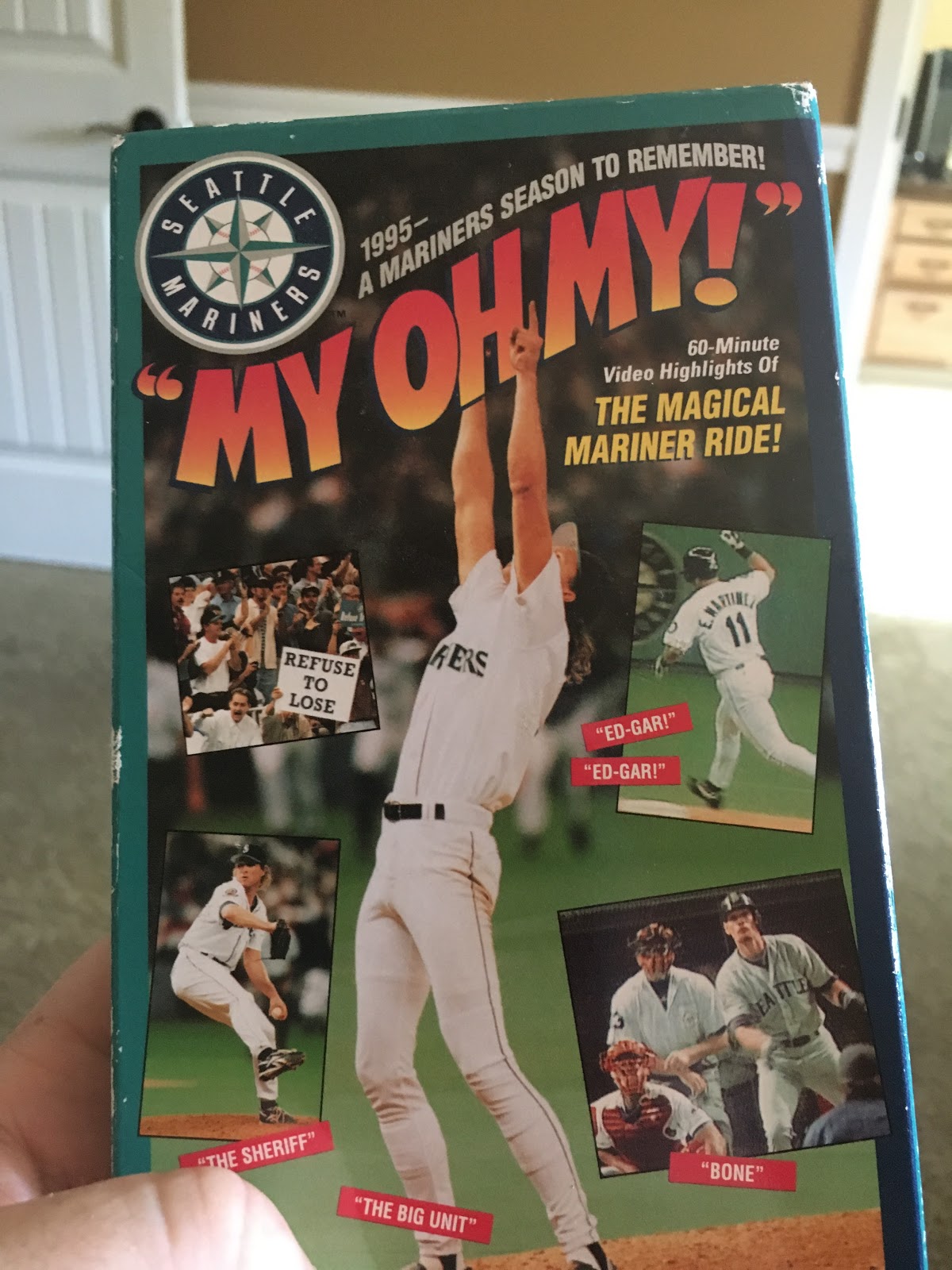 The 1995 Mariners were an unstoppable act of god. There were ninth-inning comebacks, robbed home runs and Vince Coleman grand slams seemingly every night of August and September. They took a team no one cared about and transformed them into what was, for a time, the biggest act in town. They won the AL West and taxpayer funding for a new stadium. They were only really what they were for about two months, but I remember them well. In case I forget, I have this handy 1995 VHS tape I can watch to remind me.

The first two months of 2016, when Leonys Martin was a Mariner, he had an OPS of .822. He hit walkoff home runs, made thrilling ninth-inning catches and made me believe that General Manager Jerry Dipoto was magic. Martin’s gone now, and his life has taken a path through a series of towns with people disinterested in him. 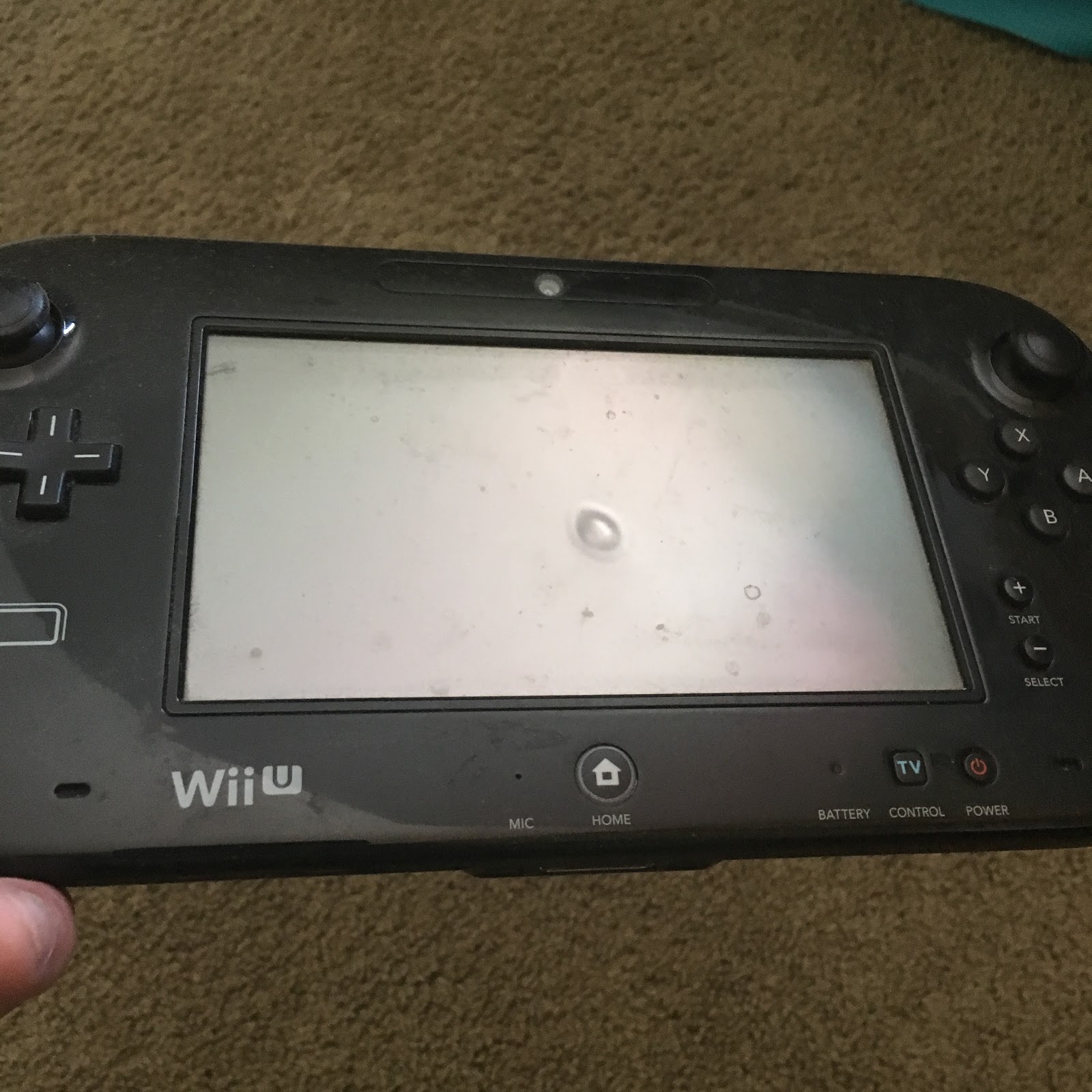 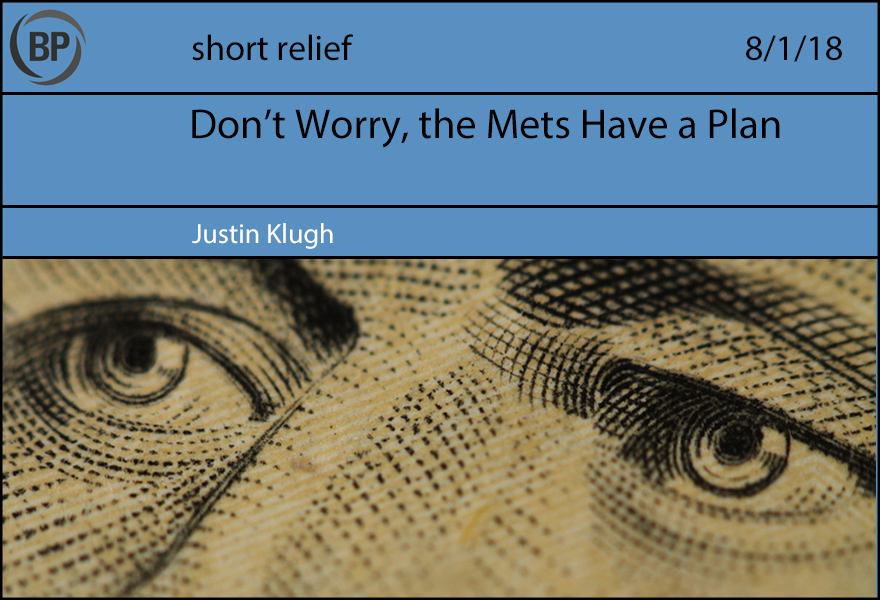 Now hold on, hold on; you might be looking at that 25-4 score of the Mets-Nationals game from last night and be thinking, “Well hey now, that’s a team that should have followed the Orioles’ example and ripped every sellable asset out of the walls before the trade deadline.” But that’s just because you haven’t heard about the Mets’ incredible 900-part plan extending into the 2100s. Due to spatial limitations and TOP-SECRET CONFIDENTIALITY, the Wilpons have only permitted us to reveal a scattering of their plan’s phases if only to assure their fans that they don’t need to worry—they’re building to something.

Watch as multiple teams add players to their rosters based on their needs or orchestrate rebuilds by trading star players for multiple minor-league assets.

Write a pre-game speech for Mickey Callaway to deliver before the first game following the trade deadline. Overall theme: “You know, life is about more than baseball.”

Use Jose Bautista as a human shield who protects Jacob deGrom from all of the trash, souvenirs and live rats being thrown onto the field. DFA Bautista after the game by having a clubhouse aid knock on the window of his car.

Become skilled in memory-erasure techniques. Use natural intelligence to develop techniques to function on a planet-wide scale.

Accept the president’s invitation to the White House. If journalists point out that the Mets did not, in fact, win the World Series and earn said invite, correct them by saying “Yes, they did” and staring penetratingly into the camera (NOTE: Make sure there are cameras).

The necklace stolen from around the president’s neck should unlock a stairway in an East Wing supply closet, leading to a natural subterranean spring that we have been assured grants wishes to those who drink from its depths.

Use superior negotiating tactics to increase wish total from ghost of Abraham Lincoln.

Have deGrom apply to be a senator’s aide during the off-season. Eliminate all other applicants by abducting them and sewing them permanently into Mr. Met costumes, as the Wilpons have done to all of their enemies over the years, dooming them to a life of unheard shouts for help as crowds of Mets fans laugh and applaud their antics.

Activate murder-chip implanted in deGrom’s head during “routine exam” in spring training. [REMINDER: May have to go back and add first part of this extremely important phase to initial phases]

Having gotten close enough to the senator to earn a spot on his staff, deGrom is in a position of mass influence after the senator’s yacht is found floating unmanned in open water.

Steal abandoned senator’s yacht while no one is looking, add to fleet of derelicts on which we will breed the next generation of rat/human hybrids for the farm system.

Take advantage of “seldom-used constitutional right” (wink) of senator’s aides to inherit their senator’s seat in government following a mysterious disappearance on a yacht.

Use deGrom’s influence in government to demolish other team’s stadiums.

Betray alliance with mole people and build state of the art facility overtop their underground city.

Unlock David Wright’s stasis tube, deploy him to unstable countries on brink of war to distract from kidnap of Nobel-Winning time-travel scientists.