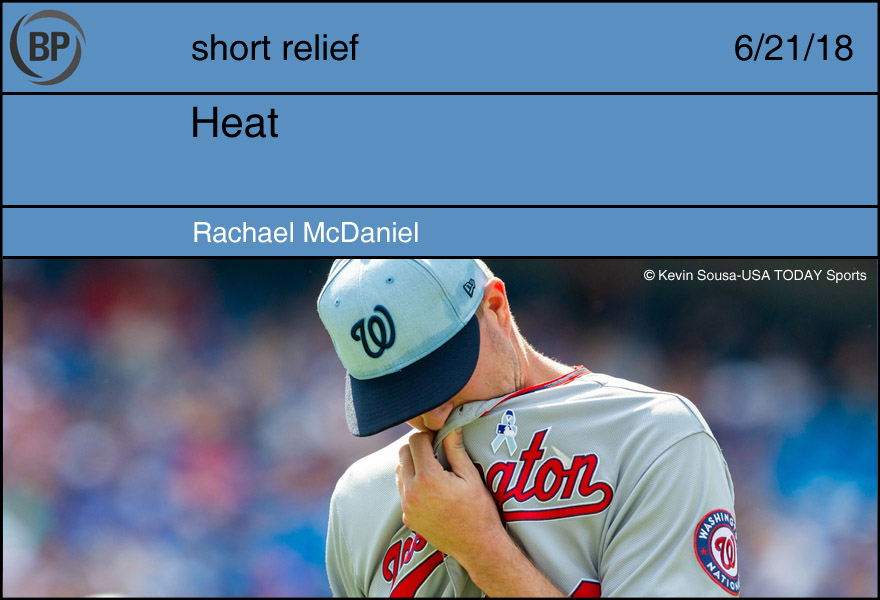 I am the most heat-averse person I know. I have lived in the Pacific Northwest, the ideal climate for someone who hates extremes of temperature, for my entire life, and yet every summer I find myself bewailing how hot it is, hiding indoors during the daylight hours, and wearing a lot of silk robes. The heat always feels like it’s attacking me personally. It makes everything feel foggier and more poorly defined than usual. The worst part is that it’s inescapable. I am trapped for as long as the summer months stretch on.

Over the weekend I found myself in Toronto, where, unlike Vancouver, there is no cool ocean breeze and no nearby forest shade to hide in. The sun was everywhere. It was more humid than anywhere I’d ever been in my entire life. I carried a large bottle of water and a container of sunscreen with me everywhere I went, and neither was enough. I stood in line for half an hour outside Rogers Centre on Sunday, the sun beating down on my head, out of water and unwilling to overpay for a bottle from the hot dog stand. I have never been that hot in my entire life.

But I stayed standing there, and then I stayed standing at the baseball game for another four hours — not thinking about how insanely hot it was, not feeling like I was dying, but feeling excited and overwhelmed. I circled every level of the stadium, taking in the game from every possible angle. By coincidence, I was standing right behind the section to which Randal Grichuk hit his second home run of the day when he hit it. I must have done three laps of each level, wearing my skinny jeans and two shirts, thinking of nothing other than the baseball game and how happy I was to finally be there. When I got home that night, I noted with shock that, factoring in the humidity, the temperature had felt something like 40 degrees Celsius while I’d been at the ballgame. I have been known to stay inside for days on end when the temperature in Vancouver goes above 25.

I’m back in Vancouver now. It was 27 degrees yesterday. I was miserable. 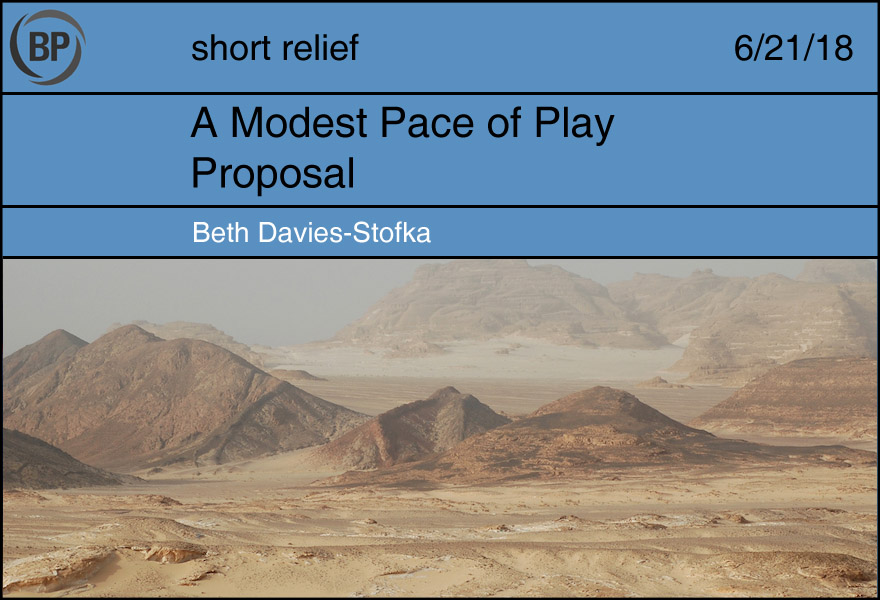 According to a recently discovered scroll, baseball dates to at least the beginning of the Iron Age (ca. 1200 BCE). Discovered by researchers in the library of St. Catherine’s Monastery at the foot of Mount Sinai, the scroll contains details of the game as it was played by the Israelites during their 40-year journey out of the desert. It would appear that, much like our modern game, an Iron Age contest went on for hours, though perhaps more intentionally than our modern iteration.

For our distant ancestors, baseball was both ritual and celebration. The event began early on a feast day reserved for the occasion (the scroll refers to this as “making a day of it”), when whole communities gathered to cook meat over fires. They gave some of the meat as offerings to their various deities, and then made formal peace offerings to one another. Then they feasted together and enjoyed a game.

The Israelites began game day with a festival of music. Instruments included harps, tambourines, and cymbals. It appears that the ballplayers played the instruments, following after singers who led a parade to the site set aside for play. They proceeded boisterously, using uplifting chants such as, “Sing to the Lord a new song; play skillfully with a shout of joy!” Once the parade reached the game site, everyone settled down to eat and watch the game.

The Israelites fielded two teams: the Rods of Moses and the Beards of Aaron. Unfortunately, much of the papyrus is degraded, so details are scant. “Our best guess,” one scholar commented, “is that these fragments belong to a recap of an important game.”

For example, one fragment reads:

Then one of the (coaches) answered and said, “Look, I have seen a son of Jesse who is skillful in playing, a mighty man of valor, a man of war, prudent in speech, and a handsome person; and the Lord is with him.”

The context of this fragment suggests that the Beards’ manager was considering using a new closer. Meanwhile, the Rods’ bench coach was heard giving a pep talk to the shortstop:

Indeed you are to (us) as a very lovely song, of one who has a pleasant voice and can play well.

Scholars are eager to learn more and hopeful that similar scrolls will also be found in the ancient monastery library. Experts have begun working with the Commissioner’s Office to examine whether eliminating Iron Age relics like food and music will improve the modern pace of play — or at least improve acceptance of the current one. 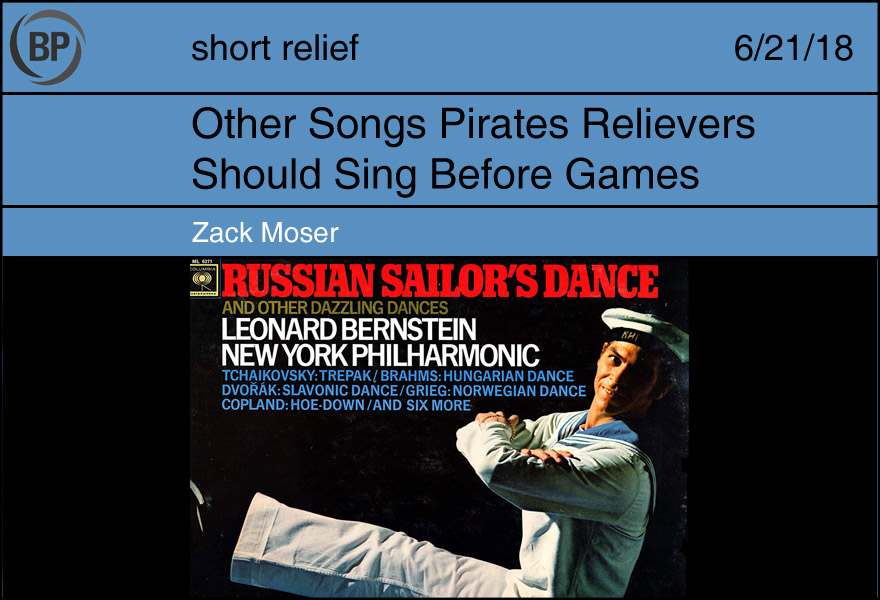 The Pirates have distanced themselves from their buccaneer image in recent years — perhaps because Pittsburgh offers little in terms of maritime history. The bullpen should take this opportunity to reclaim that history, regaling the crowd with rousing versions of classic sea shanties like “Drunken Sailor,” “Blow the Man Down,” and “Shipping up to Boston.”

“The Boys Are Back in Town”

The bullpen is historically the realm of misfits and miscreants, at least in relative terms. What better practice than to goad opposing players with their cheeky songs, then? When the Reds are in town, a paean to Joey Votto’s home country, no doubt sung with reverence, would rile up the first baseman enough to get him to swing at one or two Kyle Crick fastballs.

Apparently George Harrison wrote a song about pirates, I dunno, probably that one

The Theme from Gilligan’s Island

Gilligan’s Island and a Pirates game share several qualities. They both boast aging, red-faced skippers. Like the Minnow crew, the Pirates and their fans are stuck for a long, long time, trying to make the best of things. The show and the team each had their glory days many decades ago. And like the fateful trip that launched the series, a Pirates game lasts three hours and usually ends in disaster.

I’ve only ever listened to “The Crane Wife,” but my Short Relief colleagues assure me every single Decemberists song is about a boat.

Lyle Lovett’s “If I Had a Boat”

Lovett claims that, had he a pony, he would take his pony on a boat, which he would take out on the ocean. Like Lovett, the Pirates have lofty goals: breaking .500, finishing above Cincinnati, turning Gregory Polanco into a second-division regular.

The 1960 World Series champion Pirates had a theme song, and frankly … it’s weird. It cribs from Stephen Foster and Dixieland jazz, and it sounds kind of like a bizarro Squirrel Nut Zippers song. There’s a key modulation after just one part of the first verse—a questionable choice—and two more key changes before the song ends, including one immediately before the outro. It’s somehow nearly two minutes long despite featuring about six words. Perfect fodder for the Pirates relief corps.

You need to be logged in to comment. Login or Subscribe
Matthew Gold
Beth should have mentioned that Genesis takes place "In the Big Inning"
Reply to Matthew