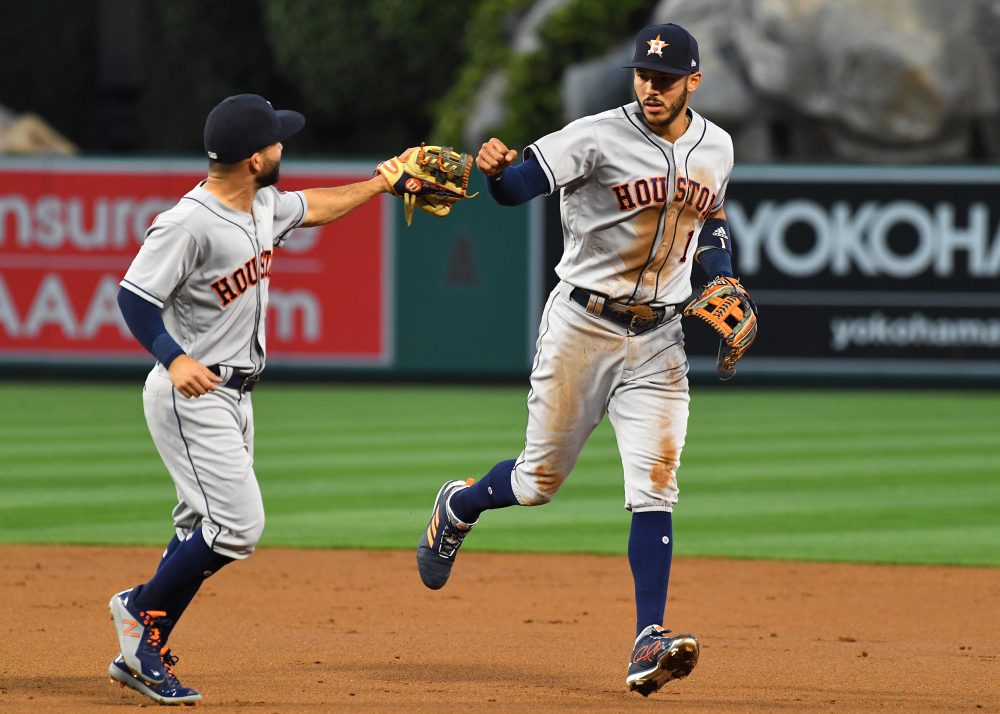 I’m not here to talk about their amazing pitching, though. At least not directly.

While looking through the Astros’ insane pitching numbers, I noticed that they’re also leading MLB in batting average on balls in play allowed, with a .259 mark that would be the lowest by an AL team since 1991. To be sure, the Astros’ pitchers deserve some credit for that. They’ve surrendered MLB’s fewest line drives (21.1 percent) and second-least hard contact (29.2 percent), along with an above-average number of infield pop-ups. Their average exit velocity allowed is an AL-best 87.3 mph. They’ve made life easy on the defense, which is why BP’s all-encompassing pitching metric, Deserved Run Average (DRA), has the Astros at an MLB-best 2.23—even better than their sparkling 2.39 ERA.

It goes well beyond that, though. Houston’s defense is the most improved in baseball according to BP’s park-adjusted defensive efficiency (PADE), rising from 19th last season to no. 1 this season. Their current PADE is the best by an AL team since the 2001 Mariners, who won 116 games. Houston’s primary lineup hasn’t changed much compared to last season, with most of the same defenders seeing roughly the same action at the same positions, but they’re turning a lot more singles and doubles into outs. What makes that especially interesting is that the Astros lead baseball in using the shift, by a wide margin. They also led baseball in shift frequency in 2016 and 2017, but the number has jumped up in 2018.

Beyond the rise in overall shift frequency, the Astros have also made headlines for the extreme nature of their shifts, and in particular for using four outfielders and/or abandoning the entire left side of the infield with zero defenders against left-handed sluggers like Joey Gallo. 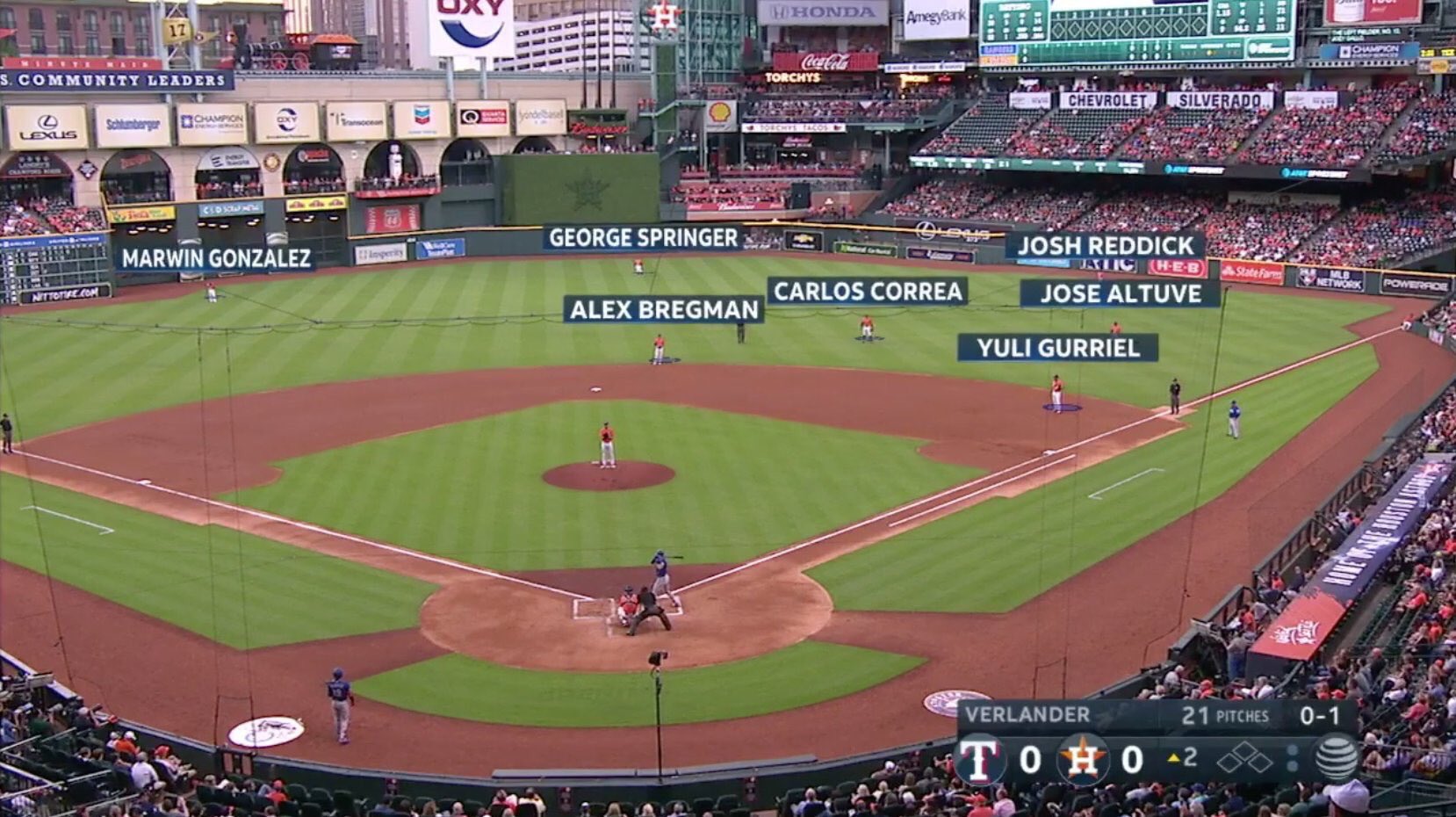 They’ve essentially abandoned the third base line, and often third base in general, in order to cover significantly more ground in the outfield (and elsewhere).

“It’s not a gimmick play as much as it’s a coverage,” manager A.J. Hinch told Jake Kaplan of The Athletic this spring when discussing the possibility of extreme shifts like the one deployed against Gallo. “Like any shifting that you do, you’re trying to put guys in a position where we can cover the most ground that makes the most sense. And some guys, when you look at fly-ball rates and you look at where they actually hit the ball, you don’t want to defend an area where there’s minimal chance of those guys hitting it. And a lot of times that’s on the ground on the opposite side of the field.”

Shifting against right-handed hitters is far less common across baseball—8.4 percent, compared to 30.4 percent versus lefties—but the Astros do so 28.1 percent of the time, up from 22.2 percent in 2017 and 19.7 percent in 2016. They’ve held right-handed hitters to .254 BABIP, compared to the league average of .301. Here’s the same 2018 vs. 2017 comparison of their defensive alignments, this time against righties.

Shifting is not a panacea, and as BP’s own Russell A. Carleton wrote earlier this week, there are side effects that call into question the overall, big-picture efficacy. Specifically, while the shift does its intended job by taking away singles and doubles via smarter positioning, there’s evidence that it also leads to, among other negatives, pitchers throwing fewer strikes and issuing more walks. The end result is murky enough that perhaps one cancels out the other. Unless, of course, a team has figured out how to frequently shift and have their pitchers pound the strike zone with the shift on. And guess what? Houston appears to have figured it out.

As you’d expect given how often they utilize a shift, the Astros’ staff has thrown an MLB-high 3,137 pitches with the shift on. They’ve also thrown an MLB-high 68.9 percent of those pitches either in the strike zone or on the edge of the strike zone, which is the highest percentage by any staff in the Statcast era of 2015-2018. Houston ranked eighth in that same metric in both 2016 and 2017, so this is yet another example of the Astros figuring something out, making adjustments, effectively communicating it to players, and turning the insight into on-field value.

They’ve gotten such a full buy-in from everyone involved, in fact, that the staff has thrown slightly more pitches in or on the edge of the strike zone with the shift on than with a standard defensive alignment. They appear to be immune to the walks-inflating side effect of shifting described by Carleton. They shift the most often, they shift in the most extreme ways, they do the best job of attacking the strike zone when the shift is on, they rack up the most strikeouts, and they convert balls in play into outs at the highest rate. Regardless of how you choose to divvy up the “credit” for all of that among the pitchers, the defense, the coaching staff, and the front office, it’s probably not a coincidence.