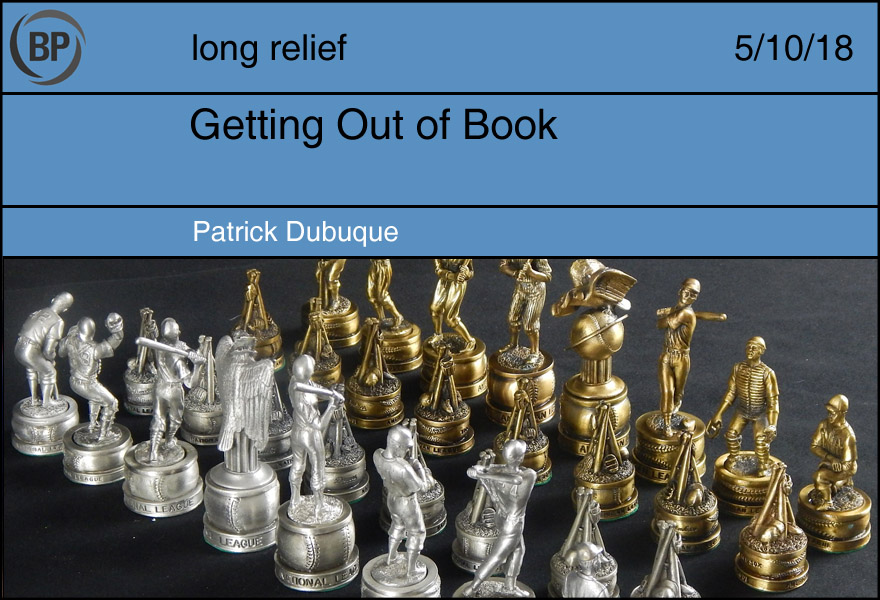 Last week over at ESPN, one Sam Miller devoted a week to imagining radical changes to the grand old sport of baseball, and considered the potential repercussions. It seems strange at first blush to think that we would take this pastime we love, and then feel compelled to alter it. But it’s only as strange as reading a book and thinking, “I wonder what would happen if I wrote one of these.” People don’t always create for the purpose of utility; they create to feel creative. Baseball is as fine a canvas as any.

Sometimes it’s actually kind of amazing that we’re still playing baseball after 150 years. Oh, sure, each new season contains a discrete set of individuals with individual talents and storylines, as well as the Cincinnati Reds franchise. But with the exception of minor rules tweaks and advancements, they all pretty much do the same things, over and over. We haven’t even figured out how to make robots or adorable dogs play it for us. And then you think about chess, which has been around in its modern form for more than half a millennia, and it’s still the same 32 pieces in the same 32 places. 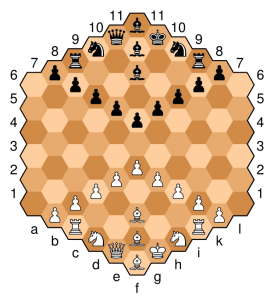 Chess is still doing just fine, but every once in a while someone gets a notion to try and spice it up a little bit, fiddle with the basic structure of the game in order to breathe new life in it. These variants are nearly always diversions at best; few if any offer any real strategic value to a veteran player other than “let’s see how good you are at chess now that chess is different.” But it’s just that sentiment that makes the exercise attractive: Chess, particularly at the tournament level, remains crushingly infinite and yet requires more digging than ever to reach its mysteries. Well-worn openings, which the masters call “book,” demand intense memorization and attention to the latest developments and ideas. It’s exhausting, and it makes it easy to understand the attraction of a blank, if slightly misshapen, slate. It also makes the whole exercise a perfect fit for Short Relief, honestly. Please enjoy this series of what baseball would look like if it were modeled after different chess variants:

This version of chess requires two boards, with each player playing one board as white and the other as black. The goal is to win either game. But the catch: any piece captured on one board can be inserted, as a move, on the other board in any empty space. The title is a reference to Alice in Wonderland, but the mechanics are more like the Indian-Japanese chess-cousin Shogi.

Baseball Version: This requires a pair of adjoining fields, and enough players to supply two split-squad games. Look Glass rules would allow any players substituted in one game (pinch-hitting, defensive replacements, short relief) to be immediately available for use in the other game, once he can get to the other dugout. Upon completion of their supplemental service, they could then bounce back to the first team again. It would accentuate the value of big-bodied pinch-hitting specialists and LOOGYs, and make Shohei Ohtani even more of a god. Managing would be fun. Knowing quite what was going on might not.

A version of chess popular with bored 11-year-olds, any capture made on the board not only removes the piece being captured, but also the captor, and any piece in the eight adjoining squares. Kings must be blown up, not checkmated. Castling is not such a wise idea.

Baseball Version: The equivalent of nuclear explosion would be banishment. You could handle this in a couple ways. One would be to make any player tagged (not forced out, not in the glove, with actual baseball in actual hand) to be removed from the game. The less visceral alternative, but eyeing an improvement to the overall aesthetic of the game, would be to detonate any batter who struck out X number of times or any pitcher who issued X number of walks. Roster sizes would have to be increased, of course, which would cause payrolls to go up, which means oh god why even bring up all these arguments all over again 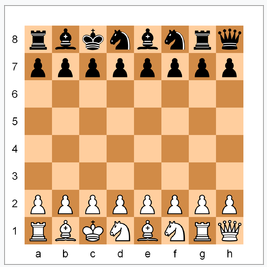 After he won his championship but before he completely severed himself from reality, Bobby Fischer proposed this minor variant, which has been echoed by other greats like Yasser Seirawan and other masters a little tired of memorizing opening book. In Fischer Random, everything is the same as normal, except that the computer randomly assigns each non-pawn piece to a random spot in the back row (and then mirrors the position for black). Let the chaos commence.

Baseball Version: Everyone loves a position-player pitcher. Everyone loves a reliever in left field. So why not nine people who have no idea where they’re going to play, all thrown into random positions on the field right before first pitch? Yes, the players would all hate it and the quality of play would suffer tremendously. But there’s something beautiful about spontaneity, and improvisation, that’s difficult to maintain in a sport and in players who repeat their singular tasks ad infinitum. Let’s make everything about baseball just a little less routine. It’s high time to reward the generalists of life, at least once in a while.

Normal chess, but with one caveat: Following each move, the player must move one of their opponent’s pawns. The effect of pawns hurling themselves unwillingly down the board gives the variant its name. With a nice defensive pawn cover impossible, both sides are forced to rush after their own front line and attack as quickly as possible.

Baseball Version: Think of this as the anti-shift variant. After the batter steps in and surveys the field, and the defense has selected their stations, he may choose one non-pitching, non-catching fielder and force them to move X number of feet in any direction of their choice (including into foul territory). Play continues as normal. Maybe we’ll finally see some bunting against the shift. Or we’ll prove that directional hitting really is a myth for everyone except Ichiro, once and for all.

There are a plethora of chess variants that allow for each player to hold a particular trump card up their sleeve: an ability to make an extra move once per game, the ability to take back one’s own move or refuse one move that an opponent makes. The general effect of such ideas is to complicate what is already, mathematically speaking, an insanely complicated game. Which is why you rarely find people playing these: the game is already hard enough.

Baseball Version: Baseball, on the other hand, is relatively simple. And especially in the American League, where in-game management has basically reached the point of thinking “oh wow I haven’t used a new reliever in a couple of batters,” the idea of adding occasional special powers to the manager’s toolbag would leave for excited (or at least happily kibitzing) fans. The most obvious method would be to give the manager one inning to be allowed one extra out—during a crucial rally, for example. Of course, seeing how they still treat closers in tie games on the road, one could imagine most managers would pocket their golden ticket every time, but at least there’d be another stat for Russell and Rob to analyze. 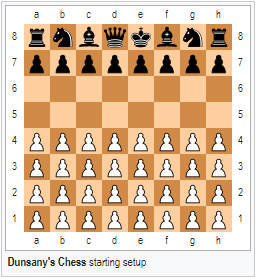 At first it looks entirely impossible for black: how can you possibly take an phalanx of that size, each pawn protecting the two in front of it? And then you look at it for a while and think: all it takes is for one piece to break through and then it can slaughter all those heedless pawns from behind. As it turns out, 32 isn’t quite enough—Horde chess, a revision, bumps the number up to 36 and is actually fairly fun to witness, and surprisingly strategic as well (if more checkers in spirit sometimes than chess).

Baseball Version: Identical to the chess game, except now the pawns are 11-year-olds. Some adjustments would be necessary: obviously, the pre-tweens would still be helpless at the plate, so this would be a one-sided affair (with the adult team needing to score a set number of runs in nine innings for a victory). Also, not out of necessity but for the sheer chaos: all obstruction rules are lifted. The result would be a million dropped flies, a million errors, and a million force outs as ballplayers struggled to swim through a sea of awkward, whining children. Plus, you know, injuries. Maybe this is one that we should just ask to have modeled in video game form.

A little like the board game Stratego, or Fischer Random mixed with rock paper scissors: A screen is set in the middle of the board, and each side is allowed to set up their pieces on it any way they wish. Once the screen goes up, the game is played as usual.

Baseball Version: It’s easy as an author to get a little loopy at this stage of an article. You’re setting hordes of biting, screaming kids on baseball players and then you become untethered enough to wonder: why do teams swap lineup cards? Do they really have to? Why not just play, bat your batters and field your fielders and make it the responsibility of the other team to catch your mistakes? They’ve got all those coaches in the dugout. It makes sense, right? Right?! 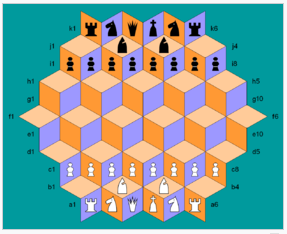 None of this makes sense. Baseball isn’t broken, everyone loves it, it’s a hugely successful multi-billion-dollar conglomerate. And yet … baseball, I firmly believe, should also be dumb. It should be waste of time. It should be actively antagonistic to our attempts to control it. Baseball is the American sport, but it’s also the American sport that says: we don’t need to be ruthlessly efficient, or even somewhat productive! Let’s all stand out in a field until we all get sunburned and thirsty and injured, look fairly ridiculous from a distance, and otherwise have nothing to show for it! Let’s take our treasured heritage and screw around with it for no good reason, except as a check from being too serious. There are so many better things to be serious about.

You need to be logged in to comment. Login or Subscribe
Nick Gutierrez
Maybe another way to think about Fischer Random baseball: at the beginning of the game, and again every subsequent time through the order, the lineups get randomly reshuffled. Of course, you'd have to deal with baserunners somehow, but I think you could just plop them down at the bottom of the order and it would work out ok.
Reply to Nick
Llarry
If there's a game of Looking Glass Baseball anywhere, I am NOT keeping a scorebook for it. On the other hand, I want to see Joe Maddon inflict Fischer Random on his own team to lighten things up during Spring Training. Or the third week of August.
Reply to Llarry