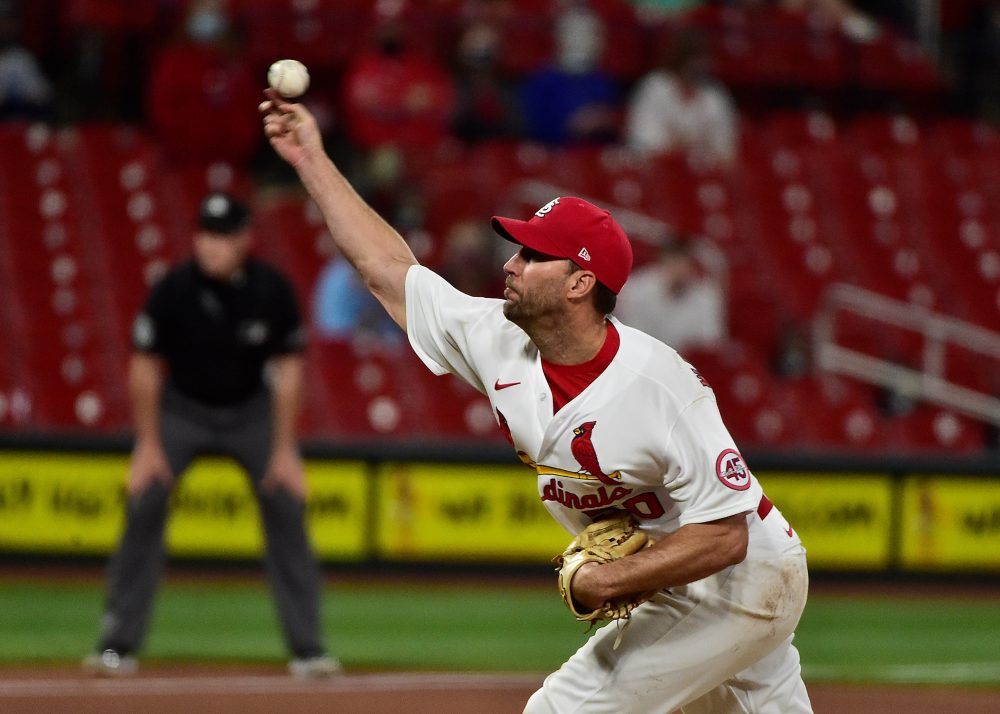 Major League Baseball is a game of elite cognition and elite physical abilities. To quantify aging, it would be useful to consider these components separately. Further, we must endeavor to eliminate performances that are inherently noisy, such as batting performance, while avoiding problems of  survivor bias. Today, we’re going to focus on the cognitive aspects.

Competitive Cognition in Chess and Baseball

Being great at baseball requires elite cognitive abilities. A batter must be able to track a missile in three dimensions, predict its final location in both time and space, and execute a swing in a fraction of a second. Pitching may be less cognitively taxing, comparatively, but still requires the athlete to translate minute finger pressure differences and grips to generate expected spin, velocity and location.

Today, we’re going to propose something simple, yet hopefully elegant. We propose to look at another highly competitive, international sport, one with an aging curve that isn’t polluted with aging challenges of complementary physical tools. That sport, of course, is the suddenly popular game of chess.

Chess is a game based solely on elite cognitive abilities. On the surface, classical chess played over a physical board, appears to be a slow game. Viewed from the lens of time per move, it appears glacial. However, beneath the surface, elite chess players are making thousands of calculations to predict the state of the board given their possible moves, as well as their opponent’s.

Knowledge Accumulation in Chess and Baseball

The other mental aspect, outside of the brain’s ability to compute the information it needs, is the accumulation of knowledge. Look into any dugout and you’ll see pitchers discussing grips and batters in earnest discussions with their coaches. Baseball players are always accumulating knowledge. Similarly, chess players are always learning and researching new theory, especially since the advent of computer-aided training. Using chess as our corollary, we get the benefit of mirroring the life-long learning processes which can forestall the forces of aging.

Chess players control their own fate. There are no General Managers to manipulate their service time, or veterans to block their playing time. This helps us avoid  survivorship bias issues when using performance data. A baseball player who is less talented, but overperforms, may be selected over a superior talent who underperforms, which can give the illusion of future years looking worse when that player inevitably plays closer to his talent level. Chess players, by contrast, can always find a rated tournament somewhere in the world to ply their craft.

We’re proposing that the aging curves of chess players will be instructive to modelling the aging curve of baseball knowledge + baseball related cognitive abilities, implying that any other aging is purely related to physical tools.

Each player has three official FIDE ratings, Standard (longest time control), Rapid (medium time control) and Blitz (shortest time control). We will focus our analysis on the Standard rating, as that is the rating with the most prestige attached to it. What is unique about chess, compared to athletic sports, is that a player’s rating very closely maps to their true skill level and is de facto adjusted for opponent strength. This allows us to accurately assess talent levels without the noise of random balls in play.

**Important technical note. Our data set only included the birth year of the chess player, so all age calculations are simply year of rating – birth year. This will have a net neutral effect on the overall aging curves.

Before we dive into the data, it’s important to note a few important rating benchmarks.

2800: Only 13 players have ever crossed the prestigious threshold of 2800, including former world Champion Garry Kasparov. Current world champion Magnus Carlsen holds the record at 2882. No player has yet breached 2900.

2700: Reaching 2700 means you are roughly a top 100 chess player in the world. On any given day, you can compete with the super Grand Masters (GMs) that are close to 2800, but you are unlikely to get more than a draw.

2500: 2500 is the benchmark for earning the Grand Master title in chess and equates to a replacement level player in MLB. The term “replacement level” really does a disservice to competitors in both sports, as it implies a less-than elite ability, which is far from the case.

For the vast majority of this analysis, we’ll focus on the 2500+ cohort, representing our “major league” corpus.

Let’s begin by looking at the lifetime aging curve of all players that have eclipsed an ELO rating of 2500. This is the average rating held for players in that age year. We don’t need any models or adjustments, since players begin each month at the rating they ended the previous month and lose or gain rating after each tournament. Only years in which the player was active are included. 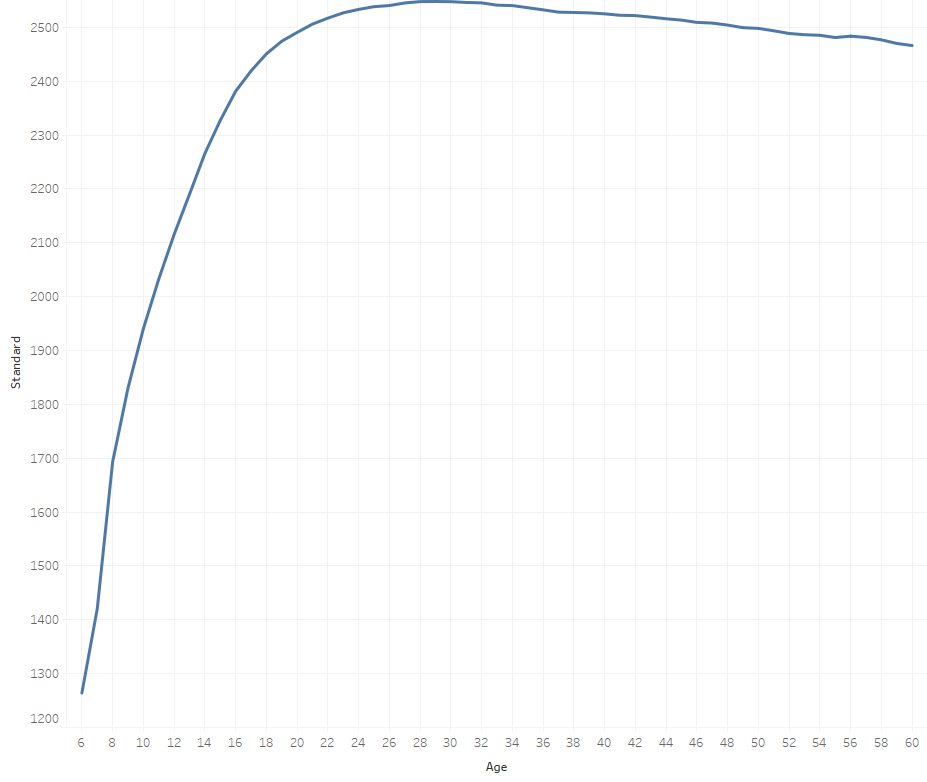 100 points of rating difference works out to roughly 1 standard deviation of skill. That means that what looks like linear growth from age 6 to age 18 is actually exponential growth in skill. This chart is very instructive, since it demonstrates just how much improvement is necessary, even if you already are one of the best players in the world at age 10. Specifically, the typical 15 year old future grand master has a rating of 2327, roughly 2 standard deviations below the grand master level. Put that in the context of trying to project a 15 year old out of Venezuela and you see the problem. To become an average grand master, you’re banking on 3 standard deviations worth of improvement.

Let’s zoom in a little, narrowing our chess careers  to the typical career lifespan of a major league baseball player plus a few extra years: 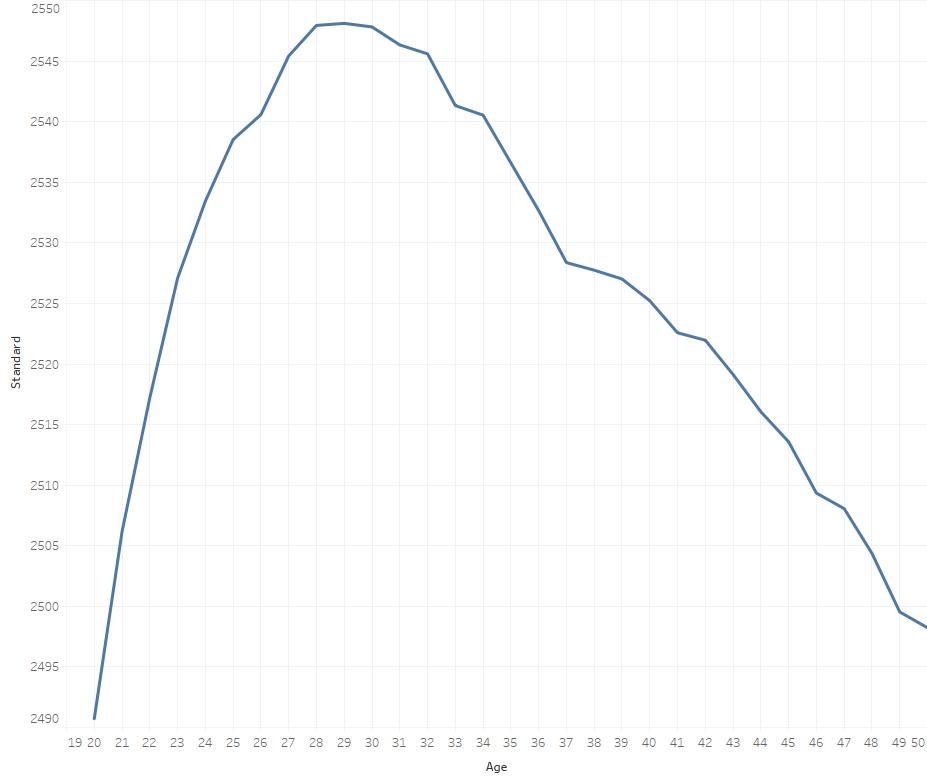 On average, we see rapid growth from ages 20 to 28, followed by a peak between the ages of 28 to 30, followed by a slow decline, where at age 49, typical players are no longer able to compete at the grand master level. Note that this peak age is roughly in line with the peak age of 27 for baseball players found by Jonathan Judge using a “GAM Across” method. 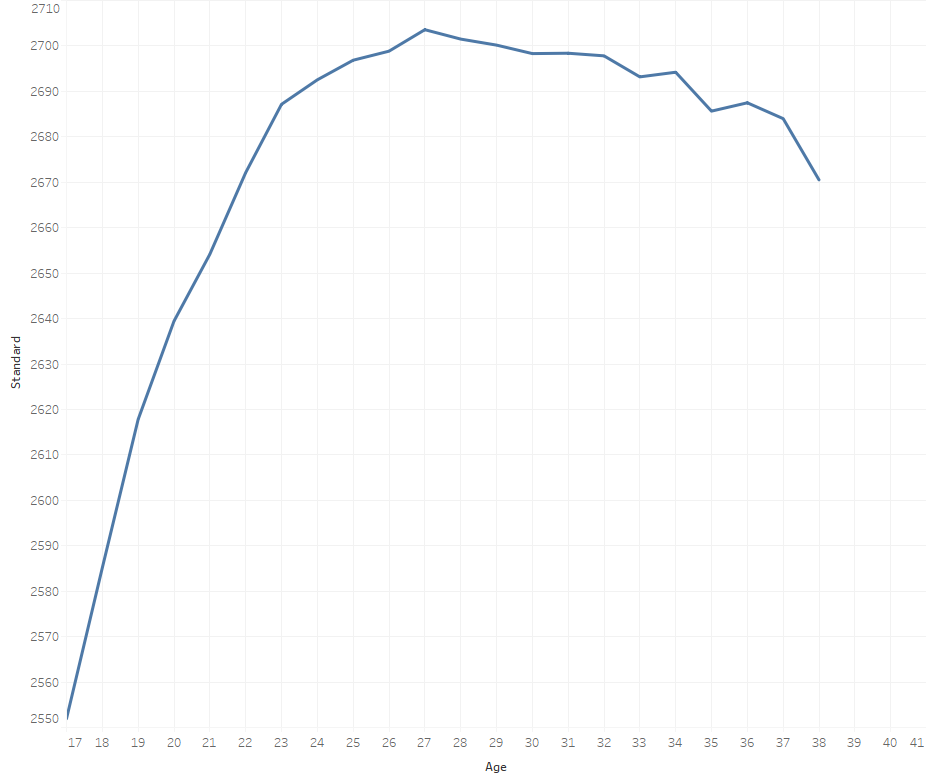 For the elite cadre of players, we see a peak age of 27, followed by a slow gradual decline. The number of active players over the age of 35 drops precipitously, so I’d be wary of reading too much into the later data. Also note that the improvement from age 20 as an average grand master, to elite grand master shows how players are still developing quite rapidly even in their early 20s. 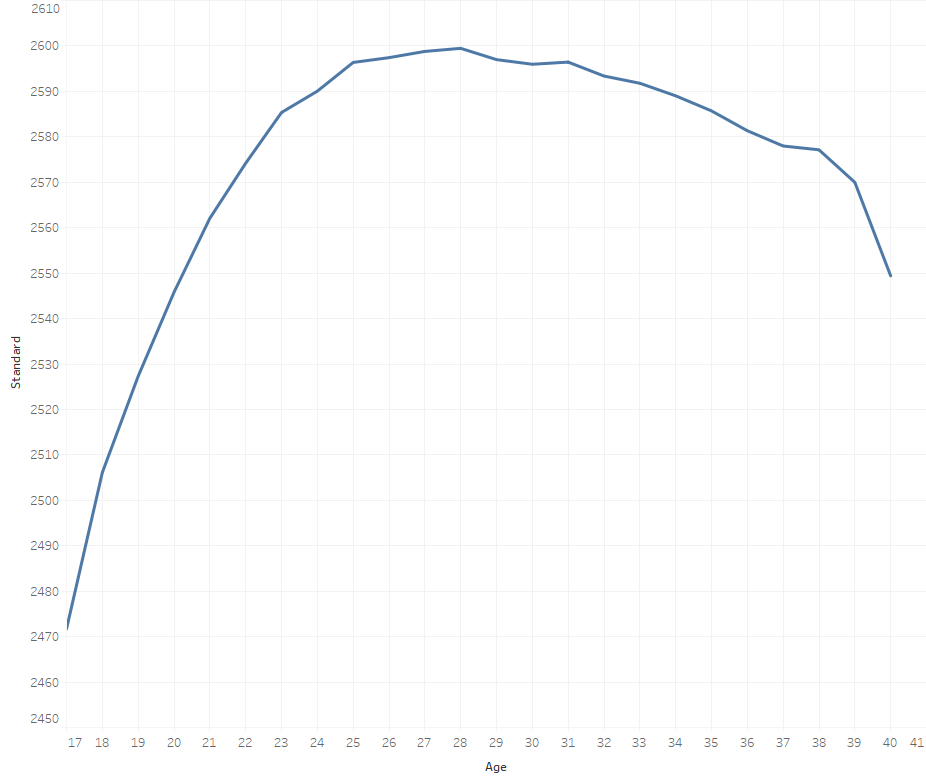 Players in the 2600-2699 peak range show a similar curve, with a peak at age 28, small drops in talent through age 31, followed by a steeper decline from age 31+. Note that there are likely exogenous factors at play here compared to the elite chess players, specifically, access to resources, such as seconds (other grand masters who help in preparation) and computer research. 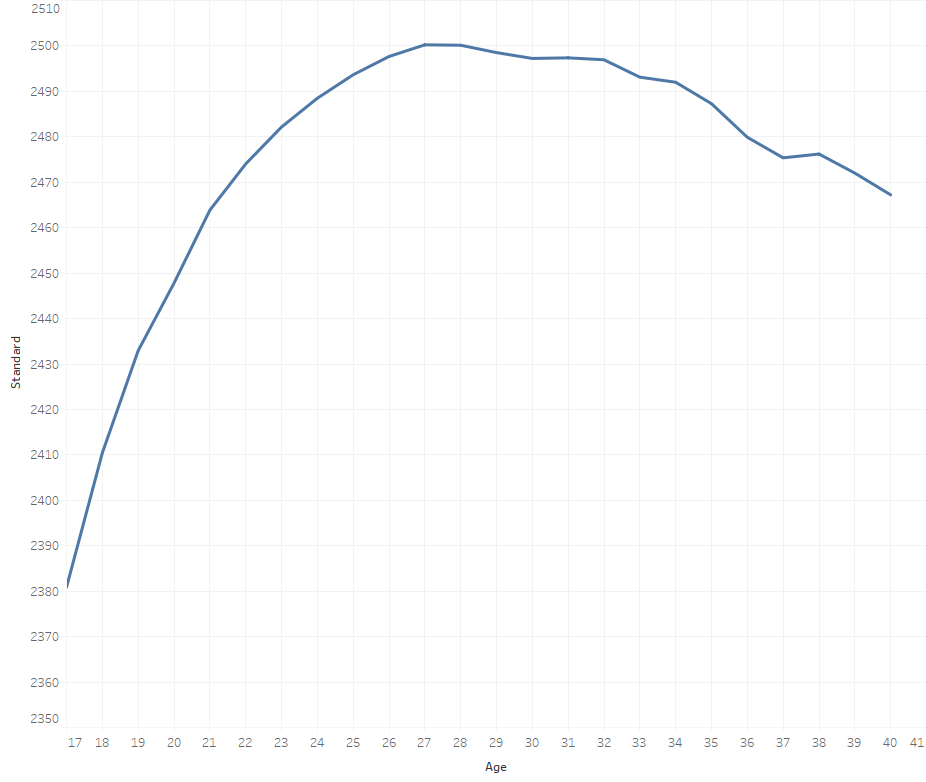 We proposed above that a 2600 rated player was an average grand master, correlating to an average MLB player. Using this rationale, we can assign roughly 2 WARP per 100 points of rating. There is no scientific basis for this, but we’re focused on relative performance, not baseball value. As such, the 2 WARP/100 rating points serve as a useful metric to translate chess aging curves into a baseball context.

If we accept the premise that baseball players and chess players see similar aging curves in cognitive abilities, we can use the table above to guide us as to how much of their skills are changing due to changes in cognitive ability, as opposed to physical tools. It is important to note just how much growth players undergo from age 18 to their peak – perhaps suggesting a greater proportion of player development occurs on the mental side, rather than their physical tools maturing.

There is no objective way to prove that the cognitive aging curves for baseball athletes are the same as chess athletes, however, it is likely not coincidental that the peak ages for both sets appear to be close to age 28. Further, it paints a picture of how much growth happens, even for elite chess players from a very young age through their early 20s. Often, in our prospect vernacular, we focus on how much physical projection a player has; the above data may just suggest that cognitive development plays a much larger role than physical development.

You need to be logged in to comment. Login or Subscribe
Benjamin Frankfort
I've been reading BP for 20 years or so and this is one of my all-time favorite articles. Thank you.
Reply to Benjamin