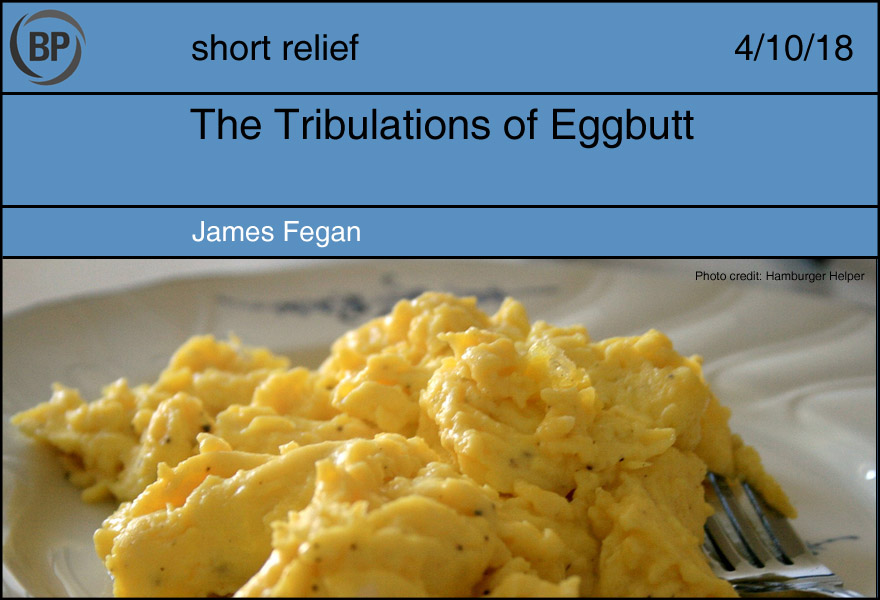 It’s the 9th inning; your team is clinging to a one-run lead on the road with two outs. As first baseman, it’s your job to pretty much just play catch with your teammates and not screw anything up, but there’s a problem. The left fielder and former teammate you despise has stepped into the batter’s box.

Last season he sat on your plate of pregame scrambled eggs, and when you pointed it out, he proceeded to invite you to eat the surface on which your eggs had become smeared. Then he followed it up by calling you “Eggbutt,” even though he sat on your eggs with his butt. Even in the April cold, your blood boils under your skin as you recall the manager writing “Eggbutt,” on the lineup card because it had become so widespread he thought it was your new nickname.

1. The time for revenge is at hand
{ } The best revenge is living well. Wave to him from first base and smile. Maybe yell “I’m feeling pretty good!”
{ } Refer to your pithy rejoinder–“Now who is eggbutt?”–that you have prepared and written on a note card kept in your pocket.
{X} Plot to physically injure him and make it appear to have occurred in the normal course of a game.
{ } You are working at your job and this is definitely not the time for revenge.

2. The left fielder–The Real Eggbutt, if people were being honest–bounces a grounder to your position at first base. The key here is to act natural
{ } Field it calmly, step on first base, make firm eye contact and say “Can a butt with eggs do this and win the game? Sounds like someone else has eggs associated with their butt.”
{ } Field it calmly, step on first base, began twirling your arms like a water sprinkler and hope you makes contact with him. Make water sprinkler noises with your mouth so as to indicate that you have become a sprinkler and are not culpable for causing physical harm.
{ } Field it calmly, step on first base, and lean backward to an imperceptible degree that leads him grazing you as he passes, or maybe slightly tweaking his ankle as he steps to avoid you.
{X} Let the ball through the infield so you can clothesline him as he rounds first.

3. Clumsily swinging your arm at the left fielder has flipped the batting helmet off his head as he passes, but he remains uninjured
{ } “Whoopsidoodle!” Pretend like it was a mistake and fetch his helmet. Blame it on a protein deficiency related to eating fewer eggs.
{ } “There’s more where that came from!” you yell at the back of his head as he continues to run to second and your teammates yell at you.
{ } Run him down and sink your teeth into his trapezius muscle. You could probably eat 1.7 percent of his physical mass before they broke the grip of your jaws with a wrench.
{X} Sink into the dirt and curl into the fetal position. Bury your head into your own chest and close your eyes, and hope that when you next open them that the game is over and everyone is gone.

4. The game is not over and no one has left and you’re still on the ground and everyone is staring, including that jerk who sat on your eggs oh god
{ } Try again.
{ } Pop up and pretend like nothing happened. Keep yelling the number of outs in the inning to indicate that you are locked in and focused. “Two! Two!” Hold up your index and pinky finger in that weird baseball player style. “Two!”
{ } Address the lingering bitterness you have with your former teammate and speak about how it has made you feel with a level of sincerity and openness that cannot help but elicit his pure, natural human sympathy
{X} Try again, but sing something from the “Cats” original soundtrack to drown out the sound everyone asking you what you’re doing. 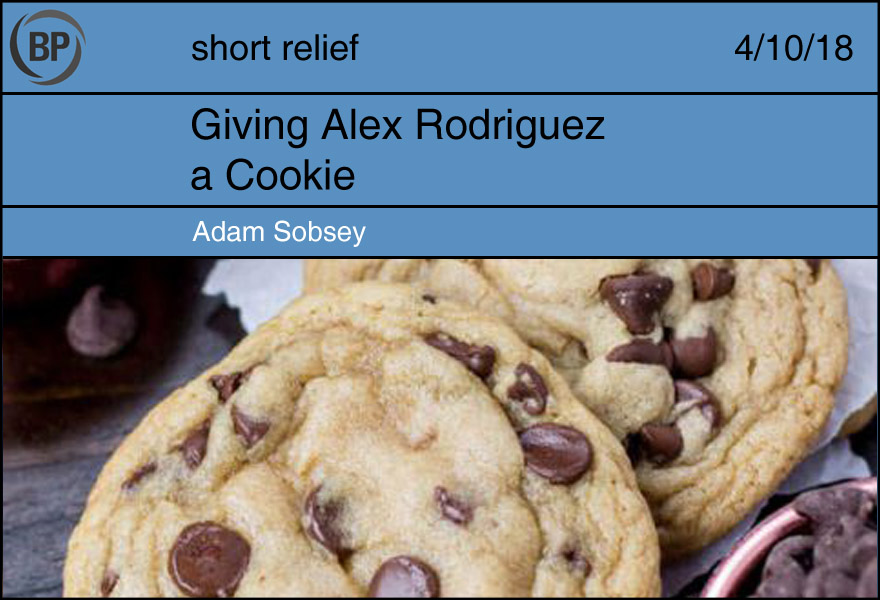 During extra innings of last night’s ESPN Sunday Night Baseball broadcast, the program returned from a commercial to one of its customary handful of establishing shots of the booth, rather than the usual panoramic of the ballpark. There from left to right were Alex Rodriguez, Jessica Mendoza, and Matt Vasgersian.

Nothing unusual about the image—except this, which was utterly, jarringly unusual: Rodriguez was chewing on some food, apparently a chocolate chip cookie, as he explained with his mouth full. His eyes were frozen by the sort of you-got-me guilt of a kid caught not with his hand in the cookie jar but with the cookie already halfway down his gullet. Actually, an even deeper, more physical embarrassment seemed to be paralyzing him; it was as if, rather than eating, he was peeing and, as Bill Cosby once explained about the way peeing is in a stand-up routine (sorry though I am to have to use a Cosby line these days): “I can’t cut off god’s work, or I’ll hurt myself, you see.” Poor Rodriguez, who has apparently never had the actor’s basic training of sliding the food into his cheek and freeing up his tongue, looked like wanted badly to get in on the fun, but he simply couldn’t talk. He just had to keep chewing, and chewing, and chewing, helplessly, while Mendoza playfully teased him about cookie crumbs.

Baseball—sports—is really hard, and not just hard but deceptively so. The easiest looking things are difficult: throwing the ball somewhere over the plate and hitting that ball; judging a can of corn and camping under it and catching it under the glare of lights; sliding into a base without going ass over elbows. Try doing these things, see how hard they are. There’s no free throw. No taking a knee. No tapping it into the cup from three inches. (And now pitchers don’t even get the respite of throwing four wide ones for an intentional walk.)

Professional baseball players make their difficult work look easy most of the time. That’s why there are so few ballplayers, of course, but we watching on TV get to take it for granted that if someone hits an easy grounder to second base, he’ll be thrown out. And that’s mostly, simply, because the second baseman, who can take his elite skills for granted, is prepared to do it. He ate his snack or peed between innings, he got his glove and trotted out there. He assumes his taut-on-toes stance before every pitch. He’s going to execute that 4-3 on your score sheet because he’s been punctual and intentional in every moment leading up to it. The most familiar sight in baseball is of a pitcher peering in at a hitter and the hitter peering back, the catcher crouched, the umpire hawkeyed. Their every molecule is present. Watching A-Rod labor mightily to chew a cookie, it occurred to me that the deepest necessity in baseball is simply to be ready. 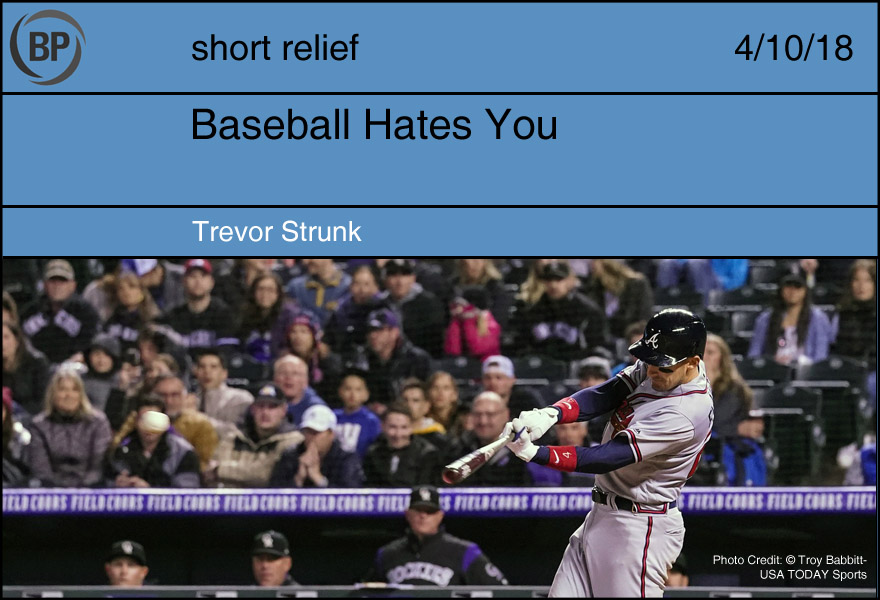 What do we know about baseball after 9-ish games or so? It’s not exactly a novel question; this is the season for the hot take April column, after all. This staple of the baseball writer both young and old represents a tradition as resonant as sunflower seeds in the outfield or the first hot dog in the bleachers. We take all of the sayings about how valueless Spring Training is, crumple them into a tiny, tiny ball, and throw that tiny ball at the “send” button on an article entitled “Are These Yankees Already The Best The Franchise Has Seen?” or “Why You Should Want A Total Teardown if You’re A Nats Fan.”

So while I’m breaking no new ground here, let me just say that if there’s anything I’m taking from the first 9 games of the 2018 MLB season it’s that baseball is extremely dumb. Not dumb in the “I hate this and never want to watch it again” sense, but dumb in the “what are we all actually doing here and shouldn’t we just be using our time to learn Mandarin or something instead?” way. As a caveat, I am a Phillies fan, so I have been spending more of my time than I ever expected pondering the question of what job qualifications really are, man, but I’ve also been struck by how unfair baseball’s results are, especially compared with our deep need for expected outcomes.

Shohei Ohtani signs with the Angels, has a UCL injury, and is knocked around in the spring without hitting very much on the other side of the ball? Well, I guess there’s a reason that we don’t see two-way play…ah.

The Mets are a national embarrassment and that World Series run was a blip on the rad…hm.

Well, I may have been wrong about those two, but let me fish out my NL Central prediction from precisely one week ago, and, while I check the actual standings, let me take a biiiiig sip out of this cup of very hot coffee.

In any case, I think the takeaway I have from this young season is that there’s no good takeaway from a young season. Every single thing we expect and write about, baseball turns to ash in our mouths. This “predictable” game, the one we build fancy models around that determine win percentage to two decimals deep, exists simply to make us crazy. So be proud when you’re mad that your “contending” 4-5 team can barely beat a “clearly rebuilding” 2-7 team. You’re simply going with the only flow you can.