On the second day of rain they had eaten so much bacon on a stick that Brian Dozier had to cross Guaranteed Rate Field and throw the rest onto 35th Street, because Tim Anderson already had the meat sweats and no one was available to replace him. The world had been sad since Monday, and before that it had also been sad. Sky and parking lot were a single ash-gray thing. The light was so weak that when Dozier was coming back after throwing away the meat-slimed sticks, it was hard for him to see what was moaning and groaning at the rear of the Craft Kave. He had to go very close to see that it was a man, lying face down in the peanut shells, who, in spite of his tremendous efforts, couldn’t get up, impeded by his enormous mustache.

Frightened, Dozier ran to get Miguel Cabrera, and they both gazed on the figure with a mute and wondrous horror. The man’s shirt and pants were ripped from stolen base attempts, and his odor of grit and wax permeated the room. They looked at him so long and so closely that they found their courage and tried to talk to the man, but his voice was muffled in his immense mustache, which flowed down his face, wrapping around his shoulders, and pooled beneath him. That was how they skipped over the inconvenience of his .315 OBP, and the ever-growing mustache, and decided that he must be a leadoff hitter, since he looked like and smelled like one.

News that the White Sox had found a leadoff hitter spread quickly. People came from as far away as Kenosha to see him. The aged came, wanting to see the next coming of Luis Aparicio. The skeptics came, wanting to believe that magic could still happen, even in a rebuilding year. The children came, and wanted to touch the mustache, which by now extended all the way to the upper deck, snaking around it like the Chicago River. The creature known as Tyler Saladino did not care to see anyone, though, and wrapped its mustache many times around itself before curling up to sleep in a nacho helmet.

The season began in earnest. Rival teams complained as their baserunners became entangled in the long and filthy mustache. They would shoo him from the infield and he would gaze back from the dugout with his antiquarian eyes. His own teammates began to ignore him after Jose Abreu found a hair in his morning hot chocolate long enough to knit a sweater from. At night they threw a fleece blanket from last year’s stadium giveaway over him and left him to sleep in the dugout. No one noticed, then, as the fevered summer gave way to the cooler temperatures of fall, the mustache began to separate into barbs and quills, began to quiver, slightly, in the strong wind blowing off Lake Michigan, until one day the team came in to do their warmups, lifted up the blanket celebrating 1983’s team to find nothing beneath. Looking skyward they could see just the hint of a figure disappearing over the horizon, the mustache flapping behind him, triumphant at last.

It’s an obvious point, but the reason those of us who don’t eat insects don’t eat them is because when we were young, and generally suspicious of food, our moms told us not to. There’s nothing preordained about not eating bugs; some of them are poisonous and can pinch you, but that’s true of other sorts of protein. We don’t do it because we’ve developed a cultural aversion to it. We eat oysters raw, which seems like it should be unfathomable, but they can’t crawl into our houses. There is food, like grains and cheese and greens and cows, and not-food, like your remote control and thumbtacks and insects. My mom told me not to eat not-food, and so I don’t. Or didn’t.

This season at Safeco, the Mariners are featuring a local Mexican restaurant called Poquitos, which sells Chapulines, or fried grasshoppers. They’re seasoned with a chili lime salt. They come in a little plastic container. They’re four dollars. They have faces. And I ate them. My mom also told me I should try new things at least once. 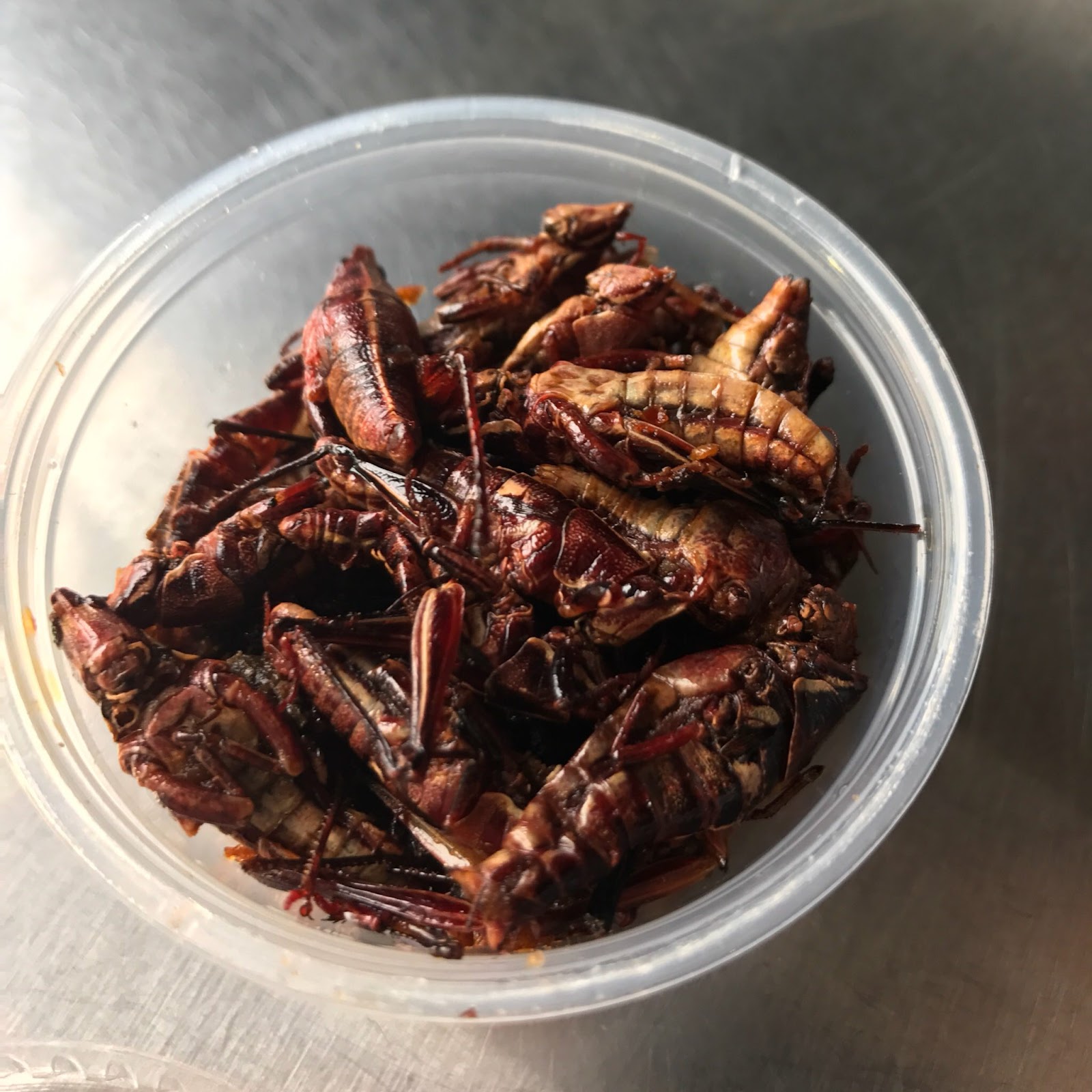 The first thing I’ll say is they were a touch over-seasoned, which signals to me a faith in adults to to be intrigued by novelty, but also a desire to give people an out. You’re eating a bug, and that’s unusual, but maybe you don’t want to remember you're doing that the whole time. It can be a bug, but not a buggy bug. A little too much cayenne fools you just long enough to forget it’s a grasshopper.

They had better mouthfeel than I expected. The texture reminded me of the snap pea crisps I get from Trader Joe's. They were not gooey, which was my second most serious anxiety about eating grasshoppers. My first most serious anxiety was that one would still somehow be alive but stunned, and wake up in my mouth. None did. One of the larger ones did have fully intact legs. That was probably the moment I was most aware I was eating a bug.

They were more obviously “theys” than most of my food. They had little eyes. (Sardines do, too, but it’s harder to imagine them holding up their little limbs in horror.) One of them had his (?) front feet tucked up close to his body, as if he were frozen in fear. I felt bad for the part I played in his fate, but what could I do?

And the little cup they came in had a lid. I've never seen a ballpark concession have a lid. We expect and accept that the stands will be a bit dirty at the park. But they're selling bugs now. Bugs that are a little too spicy and have a good texture, but bugs. A food that when you drop on the ground, it doesn’t get dirty: it makes the ground dirty. If they exist outside of their little cup, and not in your mouth, they're not Chapulines. They take on that taint of being not-food. You'd be upset if you came across a pile of them spilled, you wouldn't think it was adventurous; it would be gross. I left them under my seat, with the lid on, at the end of the game. I didn't mean to, but I forgot. I wonder how my mom would feel about that.

Opinion: Baseball Players are Trash Compared to the Supermassive Black Hole at the Center of the Milky Way 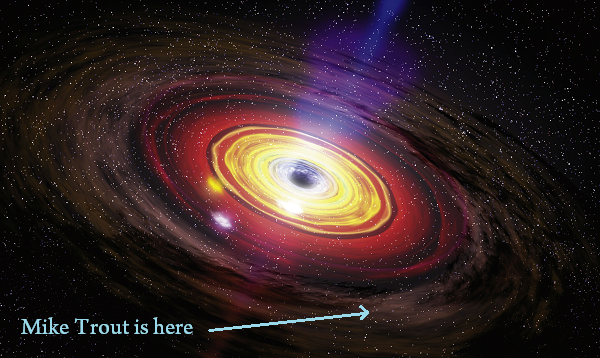 What an exciting day for baseball Tuesday was. Yoenis Cespedes hit three dingers, Mike Trout robbed one from Mike Napoli in the tenth inning, and Michael Brantley doubled to secure a walk-off win for Cleveland. The achievements of these famous ballplayers, however, are pathetic compared to the awesome capabilities of the supermassive black hole at the center of the Milky Way.

Imagine it: one giant matter-sucking singularity at the center of our galaxy, around which our solar system orbits once every 250 million or so earth years. It’s tough to conceive of something so terrifying, so beautiful existing.

Compare that to the meager exploits of our terrestrial baseball players. Sure, Jose Altuve could hit .400, or Kevin Kiermaier could dip and dive and jump his way to defensive excellence, but would any of that hold a candle to the magnificence of the unfathomably dense object at the heart of this galaxy we call home? I dare to say: no!

Our puny, pitiful earthling baseballers have inexplicably awed us for generations. Parents and grandparents have woven thick the yarns of Ruth and Aaron and Bonds, of Mathewson and Gibson and Maddux, but it’s frankly embarrassing when you think about how boring those players were in light of the four-million-times-solar-mass behemoth that lets absolutely no light escape its perimeter. Time may seem to slow down around Pedro Baez, but that’s nothing compared to the real thing.

Now we have purported images of this black hole! Well, of its event horizon, anyway. Look, my brain only has limited storage space, and I’m sorry, but if I get a look at these photos, then I can guarantee you that the first thing to go is the image of Willie Mays making his over-the-shoulder catch in the 1954 World Series.

We’re better off just forgetting about all of these garbage players, in my opinion. They’re an affront to the cosmic import of the black hole that is 4.1 million times more massive than our Sun. Why observe another inning of uninspired middle relief from Matt Belisle when you can ponder the sheer awesome quality of the supermassive black hole’s ability to warp spacetime? Not even Jharel Cotton’s screwball can do that.

You need to be logged in to comment. Login or Subscribe
rwmiller98
A great trio of quirky entertaining visits to the deep oddities in your writer's minds. Very enjoyable.
Reply to rwmiller98
bline24
I enjoyed this. Especially Kate Preusser's description of meat on a stick.
Reply to bline24
cmellinger
Excellent again! Thanks.
Reply to cmellinger
gbeat17
Sorry Meg, but I'd sooner eat the remote control or thumbtacks.
Reply to gbeat17