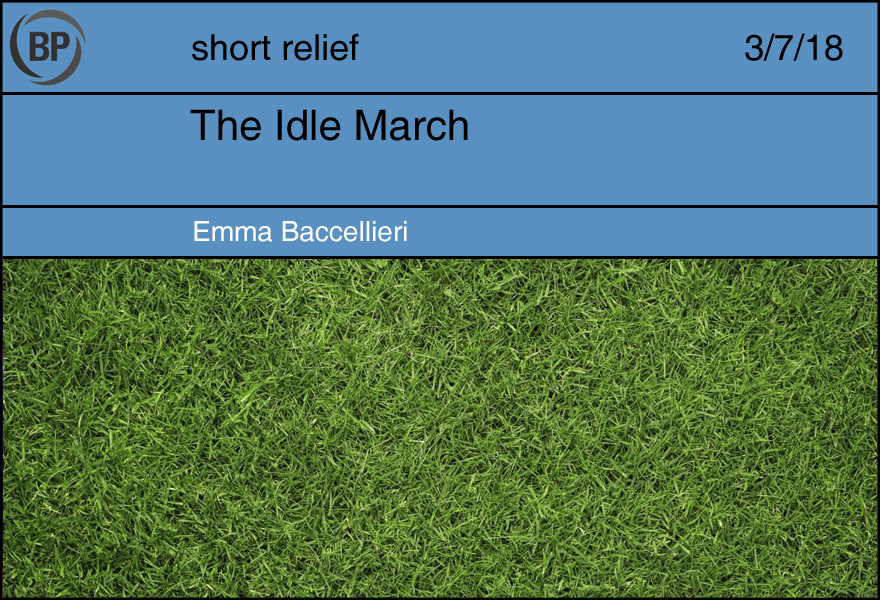 March is the worst month for baseball writing. There’s a fair case to be made for December or January, which are generally rather boring—but at least they’re unpretentiously so. They know that they’re boring. There is no great annual wave of writing that strains to make them any more interesting than they are. March, though: first, the endless unserious spring training news and the attempted serious insight that comes with it, usually self-evidently bad, and then the pre-Opening Day stream of people waxing poetic on what baseball means. That latter part can be found throughout the year, but it’s almost always strongest right before baseball comes back; it’s about what baseball represents for you and me and America, and it’s all meant to be very romantic. Grass, springtime, fathers and sons. The differences in the conversation are so minor that they only serve to show how similar all the voices are.

This was not written in March, but it evokes this particular sort of March ball-writing more than almost anything else. It’s from the journal of John Cheever, in 1963, and I hate it:

“The sod gleams. This is indeed a park. I think that the task of an American writer is not to describe the misgivings of a woman taken in adultery as she looks out of a window at the rain but to describe four hundred people under the lights reaching for a foul ball. This is ceremony. The umpires in clericals, sifting out the souls of the players; the faint thunder as ten thousand people, at the bottom of the eighth, head for the exits. The sense of moral judgments embodied in a migratory vastness.”

Baseball can be seen as ceremony; that much is true. If one wants to see it that way, then like any ceremony, the form becomes the important thing while the content gets pushed to the margins. The baseball doesn’t matter, but the Baseball As Metaphor For The Human Condition And American Spirit does. This is where the sport is necessarily called out and treated as a pastime. For if you grant that the baseball itself is important—the individual plays and the players who make them—then you cannot help but to eventually settle on the fact that baseball is just a game, nothing more or less, and there’s only so far that you can go with that if your goal is to carry out the (singular, apparently) task of an American writer.

Cheever does not describe any baseball here. Before the excerpted part of the passage, he notes that he went to Shea Stadium on the night of this writing, but he doesn’t say who the Mets were playing or share anything that happened or even date the entry other than “late summer.” The baseball is irrelevant. He seems to care only about the ritual of the whole thing, and even then, he doesn’t pay attention to why it’s established as such or what it might mean. Because more important than the ritual of baseball is the ritual of talking about baseball—that honored tradition of March. As Cheever sees it, after all, the task of the American writer is not to question or interpret or understand the four hundred people reaching for a foul ball. The motion itself is all that matters: a practiced, empty supplication.

Writing about four hundred people reaching for a foul ball is supposedly the opposite of writing about a woman thinking about her life. To Cheever, the crowd at the ballgame means something, while the woman does not. There is a universality to the baseball game—something that speaks to America, as country and as concept—while the woman cannot possibly represent anything that is applicable outside of her own self. Or, perhaps: writing about baseball, in the way that Cheever would have American authors do, is writing about custom, and more than that, it’s writing as custom, the whole point of the exercise. The substance does not matter very much, either of the baseball or of the writing. The point is participating in the conversation, and that is the only point; what one actually says might as well be irrelevant. This stands opposed to writing about a person wrestling with their actions, in which the substance is necessarily the whole thing. There is no ritual to perform here. There is only the action itself.

Meaning free of life, as opposed to life supposedly free of meaning. One is March; the other is July. 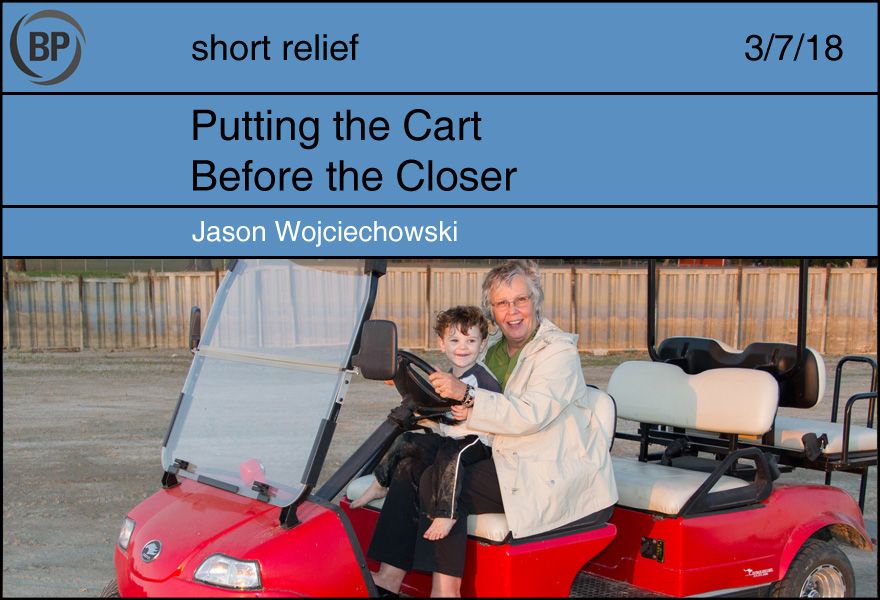 The return of the bullpen cart is Good, especially if said return is one of variety and diversity, where some teams use the cart, some continue having players run in, some let the mascot drive the relievers on an ATV, some have the guy sit in a Radio Flyer towed by a team of corgis, and so forth.

But as to the traditional bullpen cart alone, there’s been some criticism: Would Mariano Rivera being driven to the mound while “Enter Sandman” plays have any emotional resonance? Trevor Hoffman putt-putting his way to close out a game while “Hells Bells” booms through the stadium? Kenley Jansen and “California Love”?

It’s a fair point. I’m not here to poohpooh the point. I’m here to find an accommodation, to add a little something extra on top of the cart, sometimes literally, to make sure that closers still get to enter the game in a way that gets the blood pumping. Here, then: 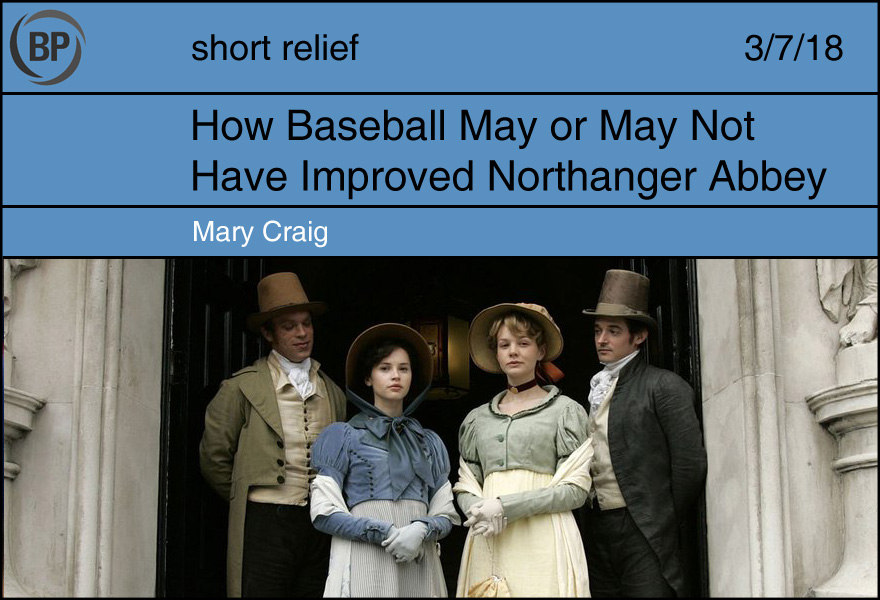 For approximately a century and a half, a not insignificant chunk of Americans have operated under the belief that the addition of baseball instantly improves things–military flyovers, wearing pants in 100 degree temperatures, men arguing about other men’s balls. Of course, as with most designated “American” things, the practice did not begin in America. In this case, Jane Austen originated it decades before it entered the American conscience, noting in the early pages of Northanger Abbey that the book’s protagonist, Catherine Morland, preferred playing baseball over engaging in more culturally acceptable feminine pursuits.

This one mention is all Austen says about the sport, prompting one to wonder whether Northanger Abbey would have been improved with greater attention to the not-yet-American pastime, or if the enthusiastic insertion of baseball into 20th century life leaves much to be desired.

To begin answering this question, I present instances in which Northanger Abbey could have included baseball, ranked from least to most suitable.

Catherine, her brother James, and John and Isabella Thorpe go for a carriage ride during which John Thorpe pretends to know far more about them than is actually the case, first telling Catherine James’s carriage is likely to break down and then assuring her it is actually quite sturdy. Imagine, instead, John explaining the rules of baseball in such a way to Catherine, before there were codified rules, leaving Catherine defenseless against the mansplaining.

Following her first night at Northanger Abbey, Catherine is shown around the expansive house and property first by General Tilney and then Eleanor. Though it would perhaps be inappropriate to insert a baseball game into the portion of the novel in which Catherine begins to suspect General Tilney of sinister deeds, Northanger’s grounds provide ample opportunity. Furthermore, Austen would have truly revolutionized the genre with a gothic baseball murder mystery.

After a month’s stay at Northanger, General Tilney angrily returns from London after learning Catherine is not actually wealthy and evicts her from his home. Catherine leaves, dejected, believing her relationships with both Henry and Eleanor to be at their end. A more inspiring chapter would have featured a baseball game in which General Tilney and Catherine would have played for the rights to Northanger Abbey. Even better: a Catherine victory would likely have left the manipulative Frederick Tilney without an inheritance.

Henry Tilney engages in a one-sided discussion with Catherine and Eleanor about the superiority of reality–represented by history books and landscape paintings–over Catherine’s beloved novels, all stemming from his need to correct Catherine’s use of “nicest.” It is unlikely Henry would have “bested” Catherine in a discussion of baseball, which beautifully combines reality with Catherine’s love of invention that she finds in gothic novels, and for the first time in their relationship, Catherine would have had the upper hand.

Catherine returns home after an extended stay at Northanger Abbey, having been rejected by General Tilney due to her lack of economic status. Her family warmly welcomes her back, worried about her sadness. Does this chapter need baseball to make it bearable? No. But baseball always improves family reunions, and it is precisely this moment in the story that Catherine needs a reminder of life before Northanger Abbey.