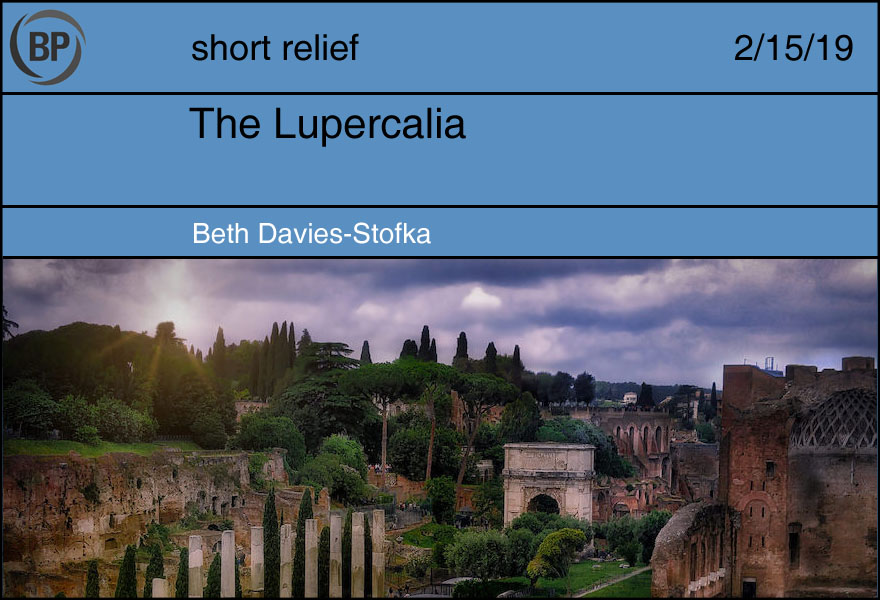 The ancient Roman festival of Lupercalia fell annually on February 15th. It was a great deal of fun by all accounts, and was celebrated for centuries, drawing a willing and rowdy crowd. It was a lewd, rude, and wildly popular festival that survived imperial Christianity until late into the 5th century.

The day began at the cave of the Lupercal at the foot of Rome’s Palatine Hill, the same cave where the twins Romulus and Remus were said to have been raised by a wolf. The celebrations began with a sacrifice; an unknown number of goats were put to the altar, and one dog, along with sacred corn cakes made by the Vestals. Next, a knife would be dipped in the blood of the animal victims and smeared on the foreheads of two high-ranking young men, and after this, the blood was wiped away with wool dipped in milk. At this point, the young men were required to laugh. Then they feasted.

After the feast, these otherwise naked young men adorned themselves with the skins of the slaughtered goats and grabbed strips of goat skin called februa. They ran around the Palatine Hill and used the februa to strike at people in the crowds. Women would jump forward, hoping to be struck because they believed it would make them fertile in the coming year. Thus, as a rite of spring, we may say that Lupercalia was a celebration of renewal and fertility.

Today, we commemorate Lupercalia. Its spirit persists in baseball’s rites of spring. This year, fans invest their hopes of renewal in injured stars like Corey Seager, Carlos Correa, Francisco Lindor, and others. We hope that our teams will be fertile with wins. We begin our festive spring assemblies happily feasting on animals, hot dogs and burgers and all manner of barbecue, and the Vestal corn of the nacho chips. Gladly standing in for our high-ranking young men, who are rehabbing, we wipe our foreheads with barbecue sauce and wash it clean with beer.

But there is a place for our players in our Lupercalian days. Let them emerge from the locker rooms and training rooms for just a few minutes each day, and let them run around the stadium high-fiving the crowds. Especially the women! We will happily jump forward for the chance to strike hands with the players we love. And let us laugh. We aren’t certain why the Romans obliged their young men to laugh, but who cares? Let’s laugh! It’s baseball! 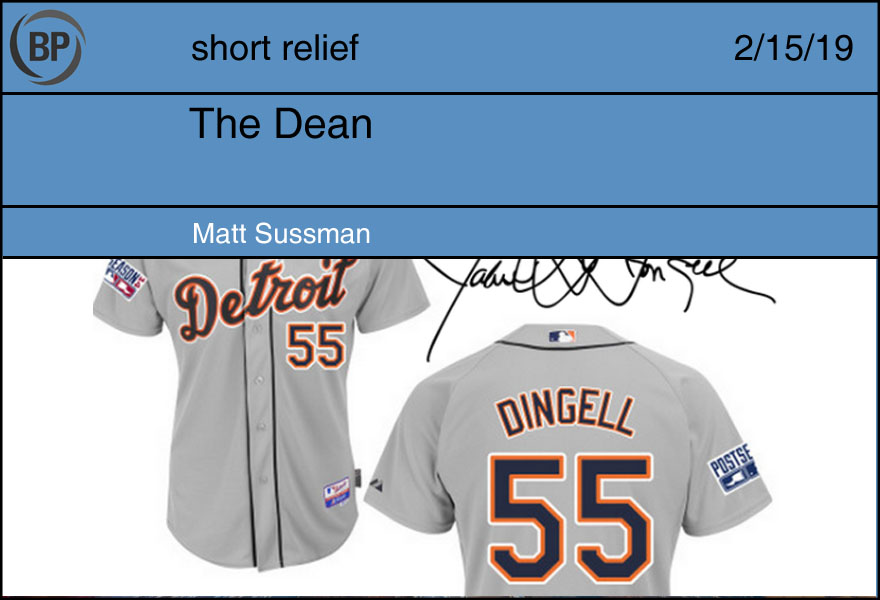 You probably saw it on the politics side of your news feed, but John Dingell passed away last week. He served for nearly 60 years in the House of Representatives, longer than anyone in history, repping Michigan’s 15th district when Eisenhower was in the White House and the Dodgers were in Brooklyn. He grew up during the Great Depression in Detroit and was infatuated with the Tigers teams of the 1930s. He knew Tiger Stadium when it was Navin Field. We had Justin Verlander, he had Schoolboy Rowe.

And yes, I realize my idea of baseball in its prime was paying a nickel to catch the bus to see Schoolboy pitch 11 or 12 innings, but still.

When he retired from Congress 2015 as the Dean of the House, at age 89, he began tweeting a bunch more, as one does when they have the time, and for four years he tweeted so damn well. He essentially became the dean of Twitter despite that not actually being a thing, nor did we think we needed one. But before he became a fierce critic of President Trump, he was our Tigers Twitter Elder Statesman, filling that precious high-profile online fan that Jeff Daniels and J.K. Simmons passed up. He shared our angst of blown leads, playoff exits and staying up late to watch the west coast games.

There are certain truths that a nonagenarian can blurt that a thirtysomething just can’t. A 23-year-old turns 23 and feels “old,” because it’s all relative — this is the oldest you’ve been. And that’s true of every time you mentally cut yourself open and count the rings. None of that can hold a candle to being 90, which I have learned from him is the age your opinions instantly turn terrific. Dingell logged on just at the right time, a rarity, and enhanced the lives of several social media denizens. And we were lucky that a small part of that was being an active baseball fan.

With Rajai Davis out, I'm ready to go in if you need me, @tigers. I'm like an older-but-equally-unstoppable Don Kelly pic.twitter.com/xWRnIlVbsR 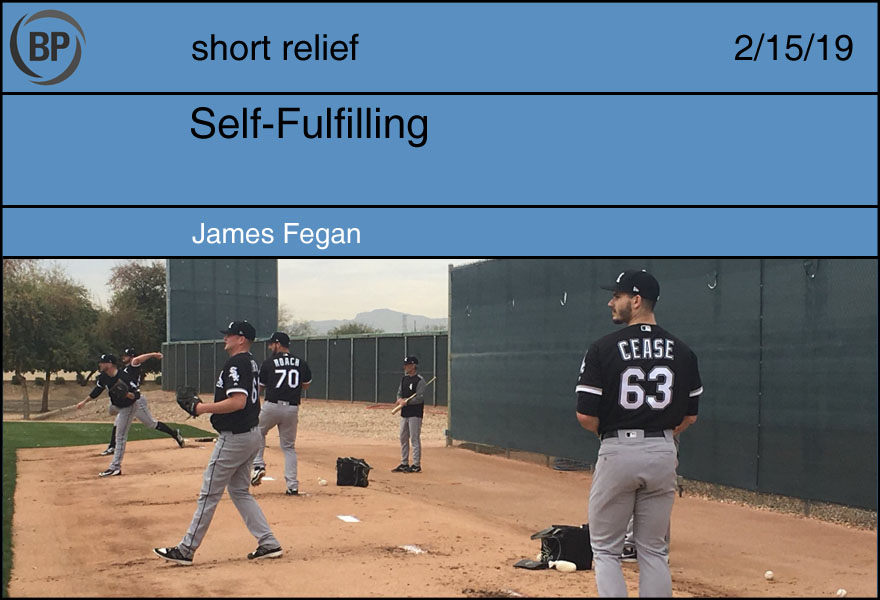 Are early spring workouts the most or least important thing in the world?

Like 87 percent of all baseball things, they are conducted in a manner that makes them seem like the least important thing ever, with the pace and demeanor of someone taking out the trash on a warm day, three days before garbage pickup day, and with more emphasis on staying hydrated and not pulling a muscle than anything else. Maybe the whole activity is just an excuse to get out of the house.

On the other hand, everyone has to show up on time, and there is an entire ethic built around the concept of taking seriously things that seem meaningless to prove that you can take anything seriously. This belief is occasionally indicated by the crunching sound of someone running on concrete in cleats to get to stretches on time. But once players are there, if they strike up a conversation with a position coach or something and kind of do their exercises at half-speed or intensity, there are too many guys on the field for anyone to really notice. There is an instructor-to-player ratio in line with the average school field trip that is threatening to descend into madness. Unless you count all the front office members, peering from golf carts with silent intensity.

If spring training game results are consistently derided as meaningless, then the first throwing session of the year must be even moreso. But now these 10-minute sessions are all tracked with Rapsodo devices across the league, probing the meaningless busy work for meaning. Sometimes the sounds of the boombox playing from batting practice waft over to the pitching mounds. Can sharp conclusions about the viability of a pitching career be made while Shaggy is playing? Do they require Shaggy to be playing to be made?

Ultimately we have a ritual in spring training known for being more cheerful than actually meaningful, beloved more for what it portends than what it actually brings. The primary conclusion about how to reach conclusions based off spring is to not do it, and yet the ritual persists, and gathers all the concentrated talent in the pro scouting world and baseball executives into two far-flung, climate change-threatened parts of the country. So it must have meaning. It must be the most important thing in the world, or it will just continue and evolve until it is.