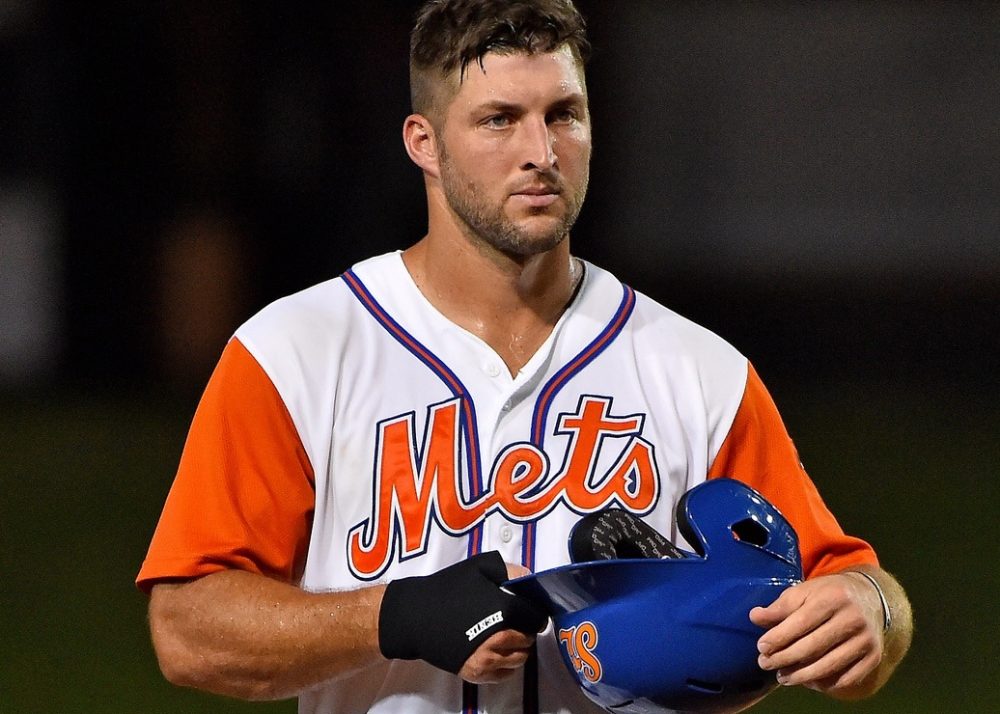 I’m not sure if this qualifies as a threat or a promise, but Mets general manager Sandy Alderson seems to think Tim Tebow will be in the majors this season. On Sunday, Alderson told reporters: “That’s my hope. And to some extent now after a year-and-a-half, a modest expectation.”

Tebow himself didn’t say he expected to be called up, but he made it sound like it could be a possibility: “If the best that I can be is in the bigs, that would be awesome. I believe in myself, and so I want to strive for that.” He added that he’s already had fun playing baseball and that if he didn’t make it, he wouldn’t regret at least trying. Tebow batted .226/.309/.347 in 126 games at Single-A last season.

The Mets also made a move to improve the team this weekend, signing starter Jason Vargas. It’s a two-year deal for $16 million, plus $1.5 million in incentives each year. Vargas made the All-Star team last season and had been with Kansas City since 2014, but missed out on playing in the World Series in 2015 after undergoing Tommy John surgery.. He compiled a 3.88 ERA in 422 innings in KC.

Vargas had a big second-half drop off in 2017, which he blamed on his approach. He told reporters in his introductory press conference: “I wasn’t doing some of the same things early in at-bats that I was earlier in the season, and that was causing me to get exposed in high-leverage situations, when the game was really on the line.” It was also his first full season back from his surgery so that also could have been a factor.

The addition of Vargas creates an intriguing situation for the Mets, because they now have five pitchers competing for two rotation slots. Zack Wheeler, Steven Matz, and Matt Harvey all have had well-chronicled injury issues, while Seth Lugo and Robert Gsellman also haven’t had the best luck with injuries. The team has tried to downplay the situation, but they won’t be able to avoid it. All eyes will be on those five guys as they attempt to work their way back into the rotation. The odd man out may have to go to Triple-A Las Vegas (or the bullpen).

The Angels invested in a couple of Chrises this weekend. They signed Chris Carter to a minor-league deal and invited him to spring training. Carter could replace first baseman C.J. Cron, who was dealt to the Rays on Saturday. The 31-year-old started off last season with the Yankees, but couldn’t get things going and was released after hitting only .201/.284/.370 with eight home runs in 62 games. Carter led the NL in home runs in 2016, so he could become one of those low-risk, high-reward guys for the Angels, but the Yankees thought the same thing and look what happened. Still, it’s worth a shot.

The Angels also signed Chris Young to a one-year deal worth $2 million. Young was with the Red Sox last season and served as their backup outfielder. He played in 90 games and hit .235. He will most likely serve as a backup for the Angels’ outfield, which consists of Justin Upton, Kole Calhoun, and some guy named Mike Trout.

The Red Sox finally got their man. They re-signed Eduardo Nunez to a one-year deal with a player option for 2019. He will fill in at second base while Dustin Pedroia recovers from offseason knee surgery. Nunez played 38 games in Boston last season after being traded by the Giants in July and he put up solid numbers, batting .321/.353/.529 with eight home runs. His deal was finalized on Sunday just in time for him to report to camp.

You didn’t think I was talking about J.D. Martinez, did you?

Rajai Davis wants another chance at a World Series, so he signed a minor-league deal with the Indians. That’s what he told reporters after he signed his deal. “I just want to be able to deliver now, and I want to be able to help us win a World Series.” Davis signed with Oakland as a free agent before last season and was traded to the Red Sox at midseason. He played in 117 games and hit .235/.293/.348 with five home runs. He stole 29 bases overall. In 10 major-league seasons, Davis has 394 steals.