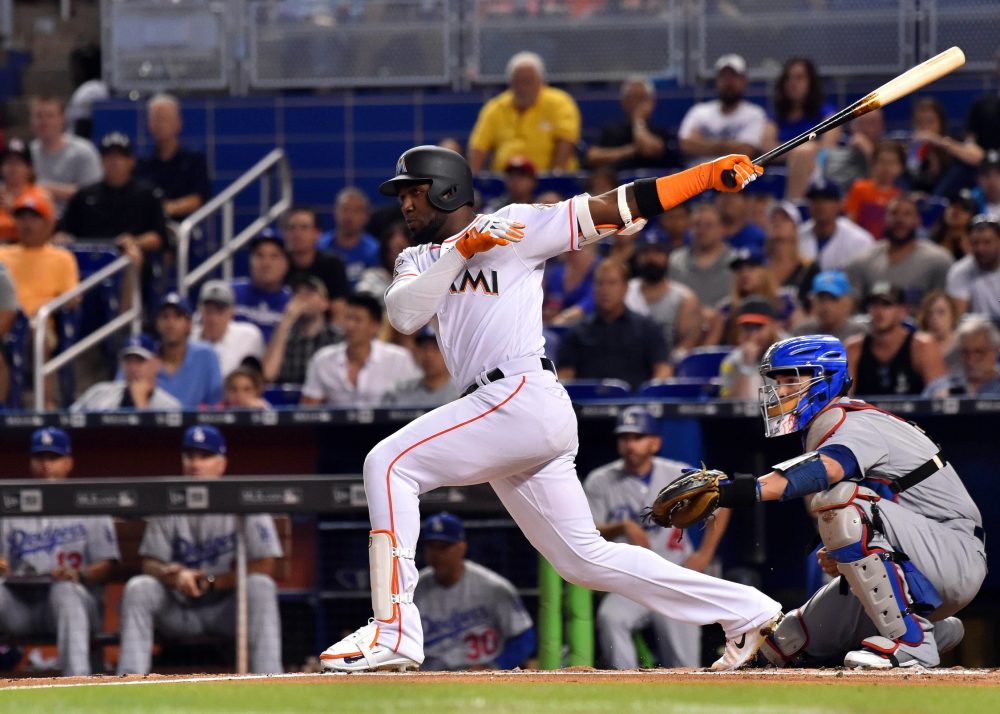 The first day of the Winter Meetings kicked off on Monday, and while there weren’t any new trades to stoke the fires of the Hot Stove, speculation abounded in full. With Giancarlo Stanton’s massive contract officially off the books (give or take the $30 million promised to the Yankees after 2020), the Marlins are reportedly shopping outfielder Marcell Ozuna as they continue to shed payroll.

As many as eight teams are in on Ozuna, says Joe Frisaro of MLB.com, with the Cardinals and Giants two of the most obvious suitors. Both clubs made concerted efforts to attract Stanton last week; given the length of their negotiations with the Marlins, they could already have an enviable edge over the competition. The Nationals and Cubs have also taken a flyer on Ozuna, though the remaining four teams have yet to be disclosed.

The outfielder’s appeal is clear: Not only is he coming off of a career year in which he produced 37 home runs, a .321 TAv, and a whopping 6.1 WARP, but he’s under team control for another two years. That’s not to say Ozuna will come cheaply, or quickly. Although he doesn’t have a monster contract to frighten away potential suitors, any deal is expected to return several top-tier prospects to Miami. Frisaro adds that the Marlins appear content to wait until a “strong offer” materializes, but according to Ken Rosenthal of The Athletic, the team is already pushing the slugger in trade talks and marketing his relative affordability.

Every warm-blooded player with a beating heart and an affordable contract is being asked about this offseason, and the Mets’ Matt Harvey is no exception. Reports from Ken Rosenthal and FanRag Sports’ Jon Heyman indicate that both the Rangers and Orioles have had serious discussions regarding the right-hander, though nothing substantial has been confirmed just yet.

Per Heyman, Rangers infielder Jurickson Profar has been floated as a possible return for Harvey, though not necessarily in a one-for-one swap. Profar, 24, performed poorly in a 22-game stint in 2017 but still carries significant potential as a former top-10 prospect and will remain under team control through 2020. Harvey, by comparison, is scheduled to enter free agency in 2019.

The Mets may yet find a more balanced trade with Baltimore, as Rosenthal hears that the Orioles would be willing to exchange a reliever for Harvey. No names have been revealed, but the general consensus points to right-handers Brad Brach and Darren O’Day. Brach is arbitration eligible in 2018 and, like Harvey, will hit free agency in 2019, while O’Day has $18 million remaining on his contract before it expires in 2020.

One massive drawback still looms over these negotiations, however. As Marc Carig of Newsday correctly pointed out, the Mets were left reeling from a slew of injuries last season and don’t want to be seen limping into spring training next year. Shoulder issues sidelined Harvey through the bulk of the second half, and it’s still unclear whether he’ll bounce back to his pre-2016, 5.0 WARP self again. Even so, the Mets might be reluctant to sacrifice their much-needed pitching depth, especially for an infielder who presents another injury risk.

Francisco Rodriguez is not going gentle into that good night. In fact, he’s not going at all. According to Jon Heyman, the longtime reliever is putting off retirement as he seeks his next gig. It’s unlikely that he’ll score another big-money contract in advance of the 2018 season, however. In 2017, he pitched to a career-worst 6.69 DRA, 122 cFIP, and -0.4 WARP in three months with the Tigers and fared little better on a minor-league arrangement with the Nationals, flaming out in five appearances before his contract was officially terminated in mid-July.

While there’s something to be admired about a player pushing toward a 17th season in the majors, Rodriguez’s declining value and inability to live up to his “K-Rod” moniker has yet to attract any interest from teams this offseason.