I asked my mom the other day, and she told me that as a kid, I never pitched a fit when I didn’t get what I wanted for Christmas. We were watching A Charlie Brown Christmas, as we do this time of year. There is a scene when Charlie Brown tells Lucy that he feels depressed around the holidays. After springing a Christmas play on him, Lucy admits, “Incidentally, I know how you feel about all this Christmas business, getting depressed and all that. It happens to me every year. I never get what I really want. I always get a lot of stupid toys or a bicycle or clothes or something like that.” Charlie Brown asks, “What is it you want?” 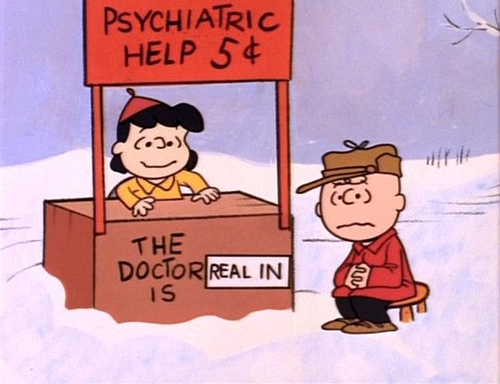 I asked Mom what my real estate was, and she thought for a minute before shrugging and saying that, after the ravenous years of toddlerhood, I mostly asked for reasonable presents. If there was a particularly large gift I wanted, like a bike or a microscope or an American Girl doll, I asked for fewer things when making my list, presumably in acknowledgment of this gift being extravagant. I was disappointed, sure, but not to the point of tears; maybe it was too big a gift. I don’t think I’m alone in having been mostly reasonable. It’s a funny thing kids do; they learn so early what they can ask for, what they might expect. They can’t articulate it in terms of dollars and cents, but they know what a big present is and a small present, and which, having seen hushed arguments or family dinners out, might be reasonable to ask for. We carry those expectations with us into adulthood. They shape our class identities and our propensity to throw things away or hold onto them; they make us balk at Lexus commercials.

On Friday I wrote about Shohei Ohtani’s choice, before he made it. I wrote about the offense we take when strangers don’t love our places our as much as we do, and about how important it is to let this young man find his home, and how we oughtn’t call him names. I wrote all that, and I meant it, but boy did I think he was going to be a Seattle Mariner. I mean, I had it bad. And in the few days of thinking that, I raised my eyes above my expectations. I asked for the microscope and the American Girl doll. I didn’t balk at the Lexus. Ohtani is a living, breathing person with his own preferences, but for once, I thought that meant preferring what I also prefer. I didn’t think like a middle-class kid; I didn’t think like a Mariners fan.

Shohei Ohtani is an Angel now. I feel a bit depressed. Like another child in A Charlie Brown Christmas, all I wanted was what I had coming to me. All I wanted was my fair share. Instead, I was gifted a Mike Morin, and all I can do is sit here. 31 is far too old to pitch a fit on Christmas morning.

I began my day ready to draft an excoriating screed on the worst things about the construction and nature of Winter Meetings; a rant centered mostly around my displeasure at needing to fly out to Orlando in the middle of December. Why Orlando, after all? When so many great things have been said about Not Orlando?

Then I realized that I am presently flying to my first Winter Meetings ever, and that my complaints would be nothing more than that of an ignorant child, who is mad about going to Orlando.

First of all, the city of Orlando is not curiously removed from the baseball world as it looks at first appearance. They are proudly represented by the High-A Florida Fire Frogs in neighboring Kissimmee. They were previously the Brevard County Manatees, and played in Space Coast Stadium. At one point their mascot was named “Hugh.” Hugh the Manatee!

Second, it’s actually cool as hell to wade through Disney World patrons and their eager and/or bewildered progeny at every turn. Amid the bitter competition, the luxurious accommodations, the gobs of money, we often get to the point of thinking that baseball is a very serious thing, and that working in baseball is a serious matter. The juxtaposition of being next to sunburned adults in their 40s lugging around multiple Donald Duck backpacks is a good reminder that no, being that caring about baseball this much is a goofy practice for nerds.

Having the Winter Meetings at an impossibly posh Disney hotel? Also very good. The aesthetics of the baseball world, and the figures that inhabit it, would seemingly dictate that the major personnel decisions be hashed out during some sort of all-week fishing trip rather than a stuffy hotel. The executive who lands the largest trout gets Giancarlo Stanton, and the team whose exec floats off into the unknown, never to return, has to execute a fire sale in response to the impromptu viking funeral. But placing everyone in the same ritzy hotel where they essentially have to either talk trades or risk having to make small talk when they keep bumping into each other in line for coffee is a good idea. It’s a more civilized version of just locking the decision makers in a room until they reach an agreement, which is a proud tradition throughout the history of negotiation.

Finally, it’s truly charming that MLB agreed to provide the premise of work as a reason for the desperately lonely writer population at large to gather and come with two-to-three craft beers of saying how they truly feel about one another in mid-December, and confessing that their absence from one another, has proven once again there is no one who can understand their irony-poisoned ravings like they can understand each other.

So once more, we embark on a week of hotel bar tabs, unspoken passion, and annual sticker shock on the market value of relievers…and we embark in Orlando.

In early December, Hunter Pence, one of baseball’s most gregarious figures, shared some photos and video from a trip to another world—not from his oft-suspected home planet, but from Middle Earth. Pence and his wife, Alexis Pence née Cozombolidis of “Let’s Get Lexi” fame, journeyed to New Zealand to tour Hobbiton, the hobbit town constructed for the filming of director Peter Jackson’s adaptations of J. R. R. Tolkien’s The Lord of the Rings and The Hobbit. There are expected amusements: 6’4” Pence crouching in front of the colorful, hobbit-sized doors; Pence looking longingly at a tiny axe and a faux cheese cart. There’s also Pence’s own appearance; he’s wearing not hobbit garb, but a replica of Gandalf’s hat in addition to his trendy sweats and puffy jacket and fanny pack. 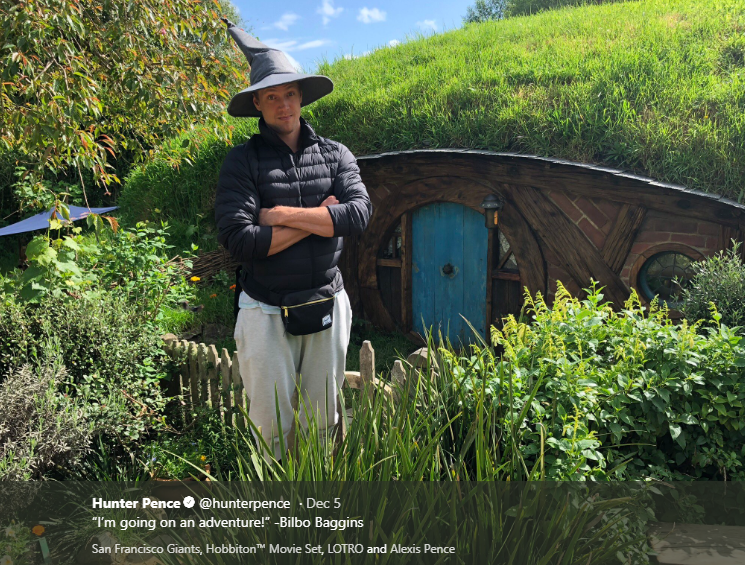 The tall man in the pointy hat striding about Hobbiton evokes Gandalf’s presence; in Jackson’s The Fellowship of the Ring, one early scene shows Gandalf stooping through doorways and thumping his head against various items in Bilbo’s house. It’s easy to imagine Hunter Pence doing the same and more so, as gangly and awkward as he appears in his baseball-playing life. Also, as Gandalf masquerades as simply an old man to those uniformed, Pence’s physical prowess is masked in so many ways. But Pence’s demeanor is far more hobbitlike than wizardly, no matter how many trips to Blizzard headquarters or how many Harry Potter gags appear on his Instagram account.

Some day, someone will write a book about Hunter Pence and his adventures, and it might begin like this:

Hunter Pence loves peace and Twitch and well-made food: an artisanally roasted and well-brewed coffee is his favorite drink. He is quick to grin and sharp-eyed, and though he is inclined to be awkward and does not throw or hit by the book, he is nonetheless nimble and deft in his movements. Laugh he does, being fond of simple jests at all times, and of six meals (including, one assumes, elevenses) and two workouts a day when he can get them. He is hospitable and delights in parties, and in scooters, on which he gives rides freely to those who might ask.