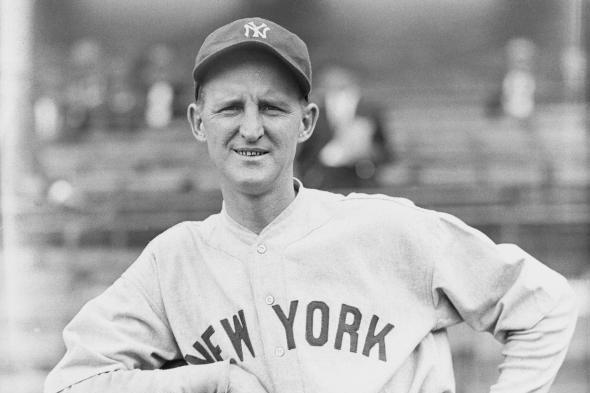 The Wild West survives to present day as an important chapter of the American identity: a symbol for national adolescence, its spirit and its recklessness. The West itself has been largely paved over, and there are ghosts beneath the asphalt, but we still have westerns, still collectively try to capture that essence of having a frontier. It’s not easy to maintain that memory otherwise; even the movies and the cheap TV shows fail to convey the feeling of life at that point, of the cold and the anarchy and the injustice and the social mobility afforded by a lack of society.

Baseball similarly struggles with this. While, thanks to our old friend Hank Chadwick, we have a perfect history of what happened in baseball, we suffer for a lack of understanding of how: how it felt, how people thought about it. We have their sportswriters, and we have those sportswriters’ collective Hall of Fame ballots. But when it comes to even a simple question like “who was the greatest outfielder of all time?” it’s easy to forget that we lacked some of the simple tools we now take for granted.

There was no WAR; Win Shares first appeared after the Mariners made their last playoff appearance. The eighties were a time for smart baseball minds who were feeling around, asking questions, sometimes asking really bad questions. It really was the Wild West of baseball thought, a lawlessness and an almost unconscious understanding that something, something exciting, was just over the horizon.

Amidst this era, in 1987, Eugene and Roger McCaffrey shared two things: a love of baseball, and a direct-mailing advertising agency. Combining these two assets, they hit upon an idea: send an unsolicited survey to every living baseball player they could track down, collect the responses, and then use it to decide who the greats considered great. They mailed out more than 5,000 letters, and got back 645. From that, they assembled their rankings, by position, of the greats of baseball history, into a book, Players’ Choice, published fortuitously on the very cusp of the modern era.

The surveys they sent out contained a number of questions (Should there be a DH? Who was the toughest out?) but for now, let’s take a moment to reflect on how baseball players judged baseball players, 30 years ago. (All calculations use Baseball-Reference WAR, with asterisks denoting careers cut short or, at time of publication, not yet into obvious decline.) The hitters: 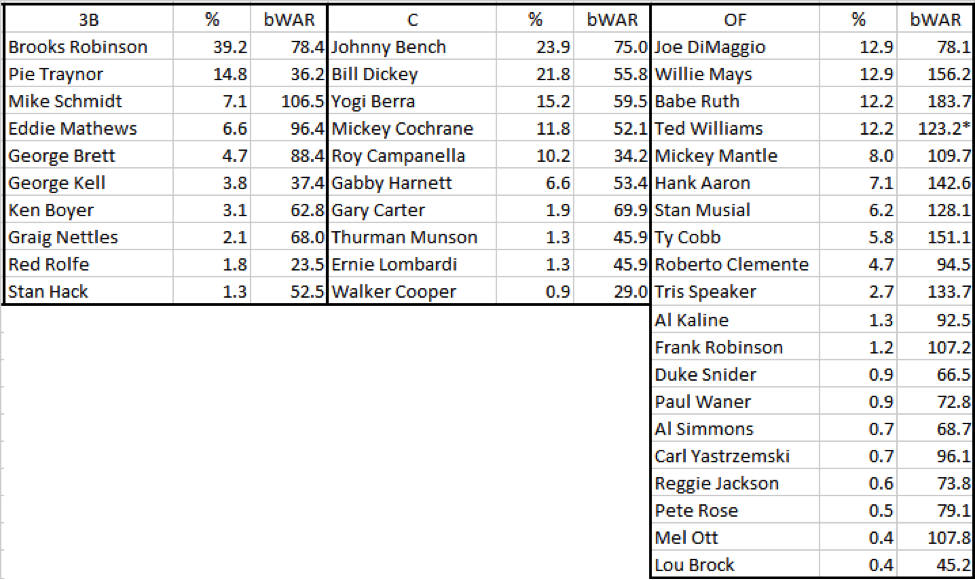 The first thing one can take away from these results is that the players did a pretty good job overall. They have some foibles, sure, but so do sportswriters, especially ones of this vintage.

It’s a pretty good list, but we there are some obvious holes. Cap Anson falls under the 19th-century rule but seems famous enough, and the first base class weak enough, for him to make it; I’m okay he didn’t. Eddie Collins is embarrassingly low; maybe he didn’t bunt enough for the old-timers. Nap Lajoie is a surprising omission; I always associate him in that same class as Charlie Gehringer, Honus Wagner, and Rogers Hornsby, or at least right under them. He got forgotten. Rod Carew probably suffers from the multi-position curse and just misses the cut at second base.

Selection bias hurt modern-by-1987 players, so it’s not a shock that Robin Yount missed the cut, and Cal Ripken was only five years into his career. Alan Trammell and Lou Whitaker are missing, but then, Whitaker still is. Ron Santo … well, it would have been surprising if Santo had gotten a vote. It’s a little crazy that Carlton Fisk can’t at least beat Walker Cooper. And while I’d like to be surprised at the lack of votes for Josh Gibson or other Negro League stars, we just weren’t there yet.

One last takeaway: one of the interesting things about disposable history books like Players’ Choice is they give you these random insights into the inexplicably loved things of yesteryear. Like Happy Days. Or Neil Diamond. Or Pie Traynor. The previous generation adored Pie Traynor—in 1976, Topps created a subset with The Sporting News to establish the greatest player at each position, and they went with Traynor even over the retiring Robinson. I don’t get it. I’ll never get it. It was apparently so obvious at the time that people didn’t even bother to debate it, so we can never even get the pros and cons. History is weird, man.

That said, moving on to the pitchers: 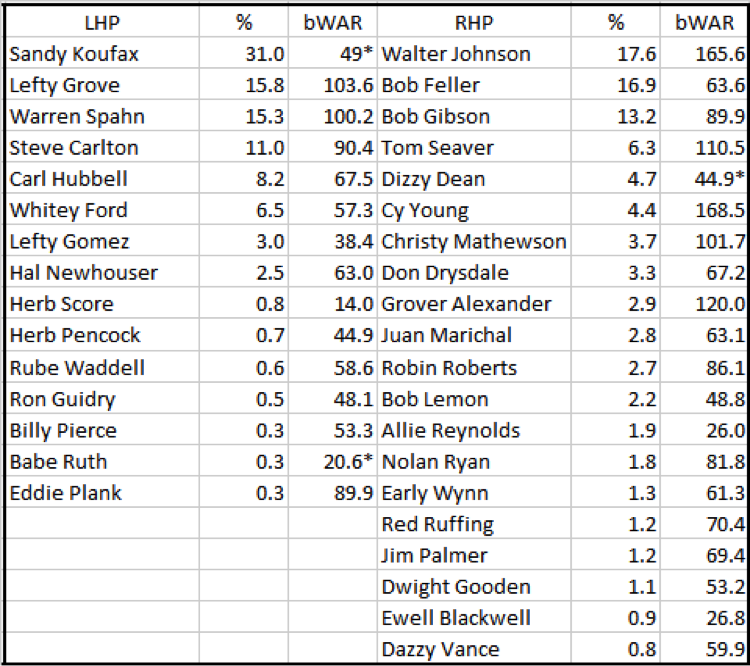 Is there anything to take away from this exercise? I think it’s clear that the existence of WAR has fundamentally altered the way we look at talent. Statistics are not the end-all, as many at the turn of the era feared; there still seem to be plenty of room for debate and conversation. But what WAR has done is reverse the order. Reading old baseball books, one thing that’s quickly noticeable is that discussion begins with legacy and is reinforced by statistics, whereas now the opposite is true; we look at their production and then adjust that total based on the extenuating factors. The rankings of Ty Cobb and Joe DiMaggio might today be reversed, simply based on the order of operations when assessing them.

I love books like Players’ Choice, not because it’s a good book or a bad one, but because it’s so clearly locked in its moment; reading the explanations for the votes feels raw and honest in a way nostalgia so often disguises. (Jim Brosnan, asked who his favorite baseball writer was, responded: “Jim Brosnan.”) Glimpsing through the thought process of a generation ago, seeing their biases and the lines of inquiry that went nowhere, gives us a reflection of our own pursuit for perfect understanding. For all of our analysis, we will also be wrong, sometimes Pie Traynor-level wrong. It’ll be fun finding out how.

You need to be logged in to comment. Login or Subscribe
John Fagot
Greg Maddox?? Not as much stuff as most of these, but a better pitcher.
Reply to John
Patrick Dubuque
True, in hindsight! But when the book was published, Maddux was just a kid with a mid-5s ERA and an even worse mustache.
Reply to Patrick