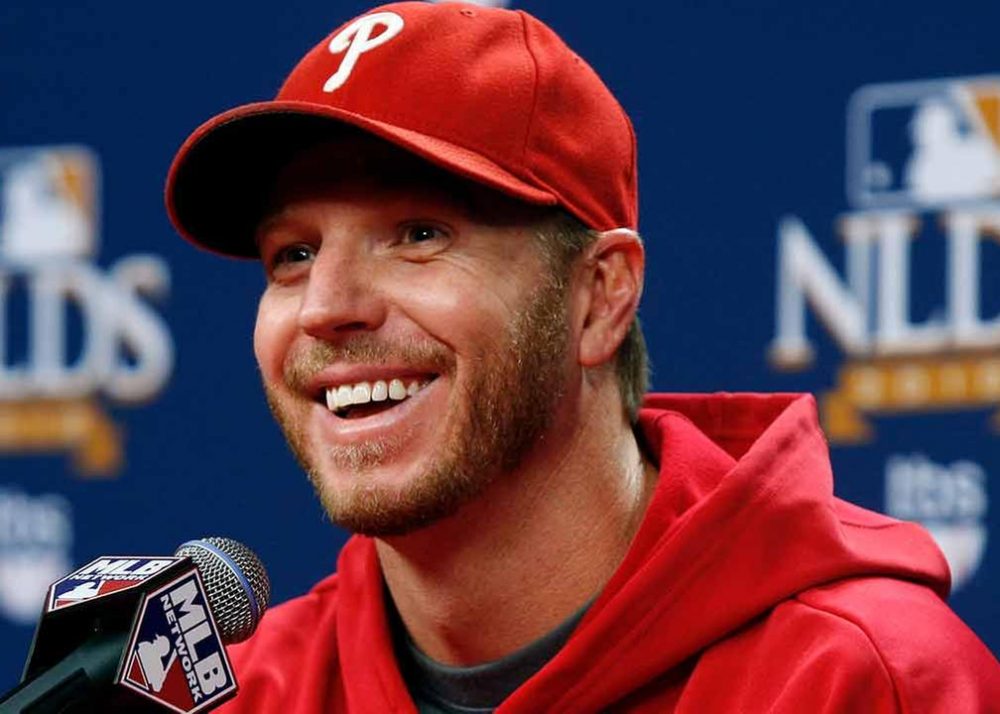 When Roy Halladay made history, I was usually elsewhere.

On May 29, 2010, when he threw his perfect game, I was at my sister’s college graduation, staying in a Days Inn that smelled faintly of “spilled liquid” and had the kind of brown carpets that are manufactured that way and stained in over time by careless and exhausted guests. I saw the last out in a bar that my dad and I didn’t really have much attachment to, and then we left after some food to watch the Flyers lose Game 1 of the Stanley Cup Finals to the Blackhawks.

On October 6 of that same year, I was in the first semester of my PhD, sitting in the trial by fire that was my English Proseminar, sneaking out for bathroom breaks and checking Gameday furtively on my phone. I got a text from my wife—who once said that she would divorce me if “I got really into baseball”—that read something like “NO HITTER ROY HALLADAY!!!!”

My MLB-phobic, early-to-bed, lovely wife had stayed up to watch Roy face the Reds, because why wouldn’t she? I was jealous, but thrilled for her and for the Phillies. Most of all, though, I was thrilled for Roy.

Roy Halladay could have been a Phillie from the start, or so the stories went after the team acquired him from the Blue Jays in 2010. It feels like a bit of sacrilege to find sources for this at a time when we should be enabling and living in myth as much as we possibly can, so I’ll just say that I recall someone saying that the Phillies considered Halladay with the 14th pick of 1995 draft. Why didn’t they select him? Given the era, perhaps it was a perceived signing bonus; perhaps it was a concern about drafting a high school pitcher. In any case, the Blue Jays drafted Roy at no. 17 and somehow netted the best player in a first round that included Darin Erstad, Todd Helton, and Kerry Wood.

Roy was born in Colorado, which is where he pitched his high school years, and so he was neither a Philadelphia nor a Toronto native. But he might as well have been for everything else. Like so many Blue Jays and Phillies teams, Roy was incredibly promising incredibly quickly before falling apart. He breezed through the minors, throwing 165 innings of 2.73 ERA ball at high-A as a 19-year-old, and got a cup of coffee in the majors at 21 during which he posted a 1.93 ERA in 14 innings and almost no-hit the Tigers in his second start. He had two more seasons of high-3.00 ERA baseball—not as transcendent as expected, but in the McGwire-Sosa-Bonds 2000s, not bad—before, shockingly, setting the single-season ERA record for a qualified starter in 2000 with a whopping 10.64 mark.

And that’s where the story might have ended, as it has for so many promising young arms in Philadelphia and Toronto. Brandon Duckworth, Ricky Romero, Kyle Drabek: all tears in rain, and ghosts of past, present, and future for young Roy. But instead of giving into the weird and often inscrutable moods of baseball, Roy went to see a sports psychologist and figured out his mental issues within the game. He did, incredibly, what so many of his fans including myself would have to do. He stood up and admitted a weakness, admitted that he needed to talk to someone, and took charge of his career.

And boy, did he. Seven seasons placing in the top five of Cy Young voting, with two wins, one in each league. An ERA that only rose over 4.00 twice ever again—once in the absolutely shellacked offensive year of 2004, and once in his final year, 2013, when his arm gave up on his indomitable drive. Before that, though, between 2008 and 2012, he never had an ERA worse than 2.78 and never logged fewer than 233 innings in a season. He was, in a word, transcendent.

When Roy was traded to the Phillies from the Blue Jays, it represented the culmination of general manager Ruben Amaro’s Ahab-like quest for the starter. He had tried to get him at the trade deadline in 2009, “settling” instead for on-again-off-again Phillie Cliff Lee. After a stellar second half by Lee still ended with a World Series loss, Amaro doubled down, trading Lee to the Mariners in the offseason while trading for Halladay. It was expensive, prospects were lost, and the fan base was mad at a perceived “cheap” ownership, but the white whale had landed in Philadelphia. Roy Halladay was going to be in red pinstripes.

And he made an immediate impression. Affable, hardworking, intense, driven, fast on the mound—if you wrote Roy into a script about Philadelphia, you’d be sent back for rewrites for being too on the nose. Whatever stereotypes and sins the blue collar athlete label encompasses, the fact remains that Phillies fans love someone they can see as a hard-nosed workaholic, and Roy was that in spades. Plus, his nickname was Doc. Who could dislike that?

As an avid Phillies fan, I found myself in love with Roy’s ability and his personality. A sabermetric darling who seemed like a good guy and a mentor, who never let his talent go to his head, who cared about his mental health. I’m fighting against schmaltz in this piece in general, but you’ll forgive me if I flag a little by saying that Roy was in some ways a role model. Especially a role model as I moved away from Philadelphia to go to a new city in Chicago, to pursue a seemingly impossible academic challenge, to make new friends and connections with my wife, away from our families. The Phillies connected me to home via MLB.tv, and watching Roy from afar was a lifeline.

My father, who had said that Cliff Lee was the closest he’d seen to Steve Carlton, came to be just as fond of Roy. And when the team signed Lee in the 2011 offseason and constructed their “four aces” rotation along with Cole Hamels and Roy Oswalt, the feeling was electric. It was in this atmosphere that I got my first job writing about baseball, piggybacking off of a frankly ostentatious piece about statistics and the dialectics into a staff position at SBNation’s Phillies hub, The Good Phight. I learned everything I know about writing for baseball under the tutelage of people there—Elizabeth Roscher, Peter Baker, the pseudonymous Wet_Luzinski, and so many more—and I learned just how much I could love baseball by watching this absolutely transcendent team fly through the regular season.

They didn’t make it all the way, but that sting has lessened. The 103-win season was a massive achievement, and I don’t regret spending my time on it one iota. But if there’s one region-wide trauma we all share from the losses in 2010 and 2011, it’s that the team couldn’t get Roy to his well-deserved World Series. The Western that was Doc Halladay had a bittersweet ending.

But that bittersweetness is what now brings me back to May 29, 2010. What I think is so staggering about Halladay’s tragic death is not that he died—we all knew he would, despite all appearances, eventually pass off this mortal coil—or even that he is so close to my age (just seven years older than me), but that it seems so mundane. Roy was the kind of guy you’d expect to somehow emerge from the water, unscathed, smiling ear to ear and laughing. Just effortlessly pulling the impossible off and shrugging on his way to the next feat.

Which is who he was on the May 29, 2010. My dad and I got to that anonymous Western New York bar just in time to see the last out, a grounder to the hole at shortstop, not at all a routine play in a 1-0 game that was not at all out of reach for the Marlins. Juan Castro threw a dagger to Ryan Howard, who caught it, lifted his hands up, and headed the mound. But Roy threw his glove down and ran to his catcher, Carlos Ruiz, to embrace him and congratulate him on the game. This appreciation for his battery-mate would continue on into his playoff no-hitter, as Roy bought watches for Chooch on each occasion.

For my part and my father’s, we didn’t pick up on the selflessness of the gesture, nor the meaning of the team’s quick convergence on the mound. It had been a busy day, and we weren’t paying attention to a May baseball game, so we didn’t know that this was the culmination of a whole nine innings of nerves and tension letting out. We watched the celebration for a few minutes, cocked heads and straining to read any text explaining what we’d seen, until we heard it was a perfect game.

“Yeah,” I replied, following up with something along the lines of “that’s really cool for Doc, he’s such a good pitcher.”

And then we went on with our night. The perfect game was remarkable, but because Roy had done it, it was remarkable within a career-long patina of excellence, and was a moment to contemplate sublimity in talent as opposed to the fluke success of a single game. So it was, also, with the no-hitter in the NLDS, when the team and the fans after the celebration moved onto the next game quickly and without hesitation. It was Roy, after all—what else would he have done in his very first playoff spot?

Every time Halladay pitched, against the well-worn warning not to, he tried to pitch a perfect game. It was who he was, and who he presented himself to be on the field. He was a perfectionist, a workaholic, and, to these self-effacing eyes, a fellow worst-critic-of-himself. And as he revealed himself more and more to the city, we realized that his care and concentration was not a veneer, not a brand choice, but a part of who he was. From charity work to the fulfillment of a Twitter bit through a trip to the zoo, Roy was not just an incredible athlete, he was one of the rare baseball players I, and so many others, could relate to. He was physically gifted, but he was always hustling, working against his own demons, and trying to help those around him.

And so, at the risk of being maudlin, let me affirm: Roy Halladay was an important person to me and millions of other fans in Philadelphia and Toronto. He was routinely exceptional and pointedly human; he felt like an institution by May of his first year in a new city. So while he came in as Halladay, and while he became Doc, to the people who watched him the most—to me, he’s just Roy. And I’ll miss him.

Rest in Peace, Roy. Heaven’s got a new cutter.