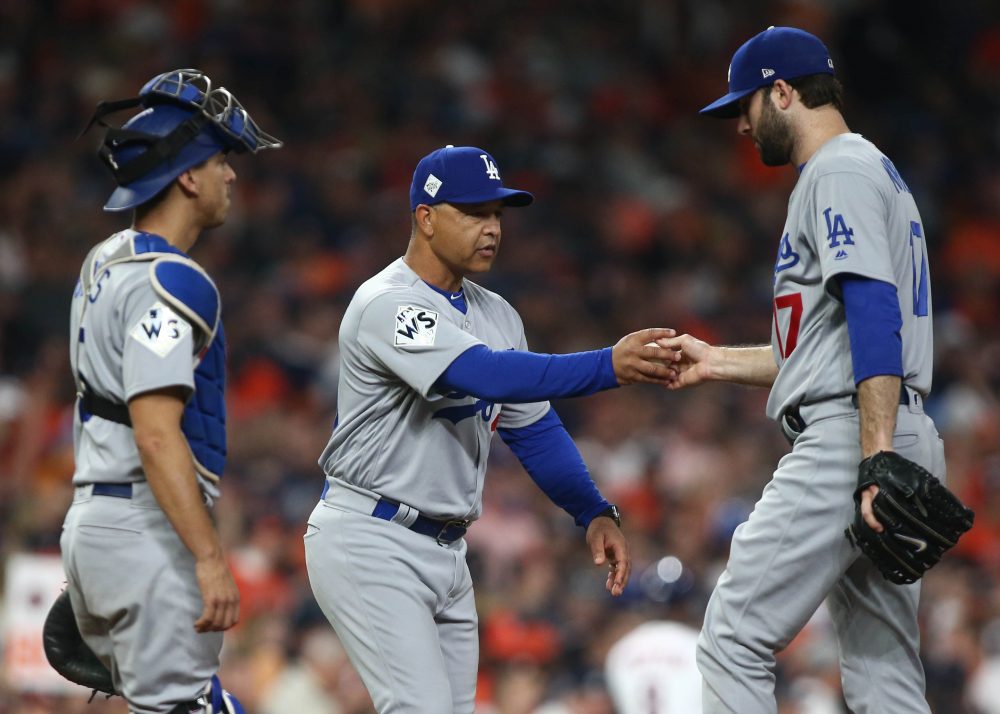 Sometimes it’s just kind of hard to figure out a good strategy. You’re 15 minutes deep into a wander around the parking lot where you’re sure, just sure, you parked on the red level. The company’s due in five minutes and the roast is on fire. Or maybe both top-20 starters have donned shower caps before the game became official, a bunch of relievers are already toast because it’s Game 5 of a World Series that feels like it’s already 15 games old, and everyone who’s supposed to not be toast already has come in and walked a bunch of dudes and served up three-run homers like that’s just the thing to do.

Entering a baseball game, a manager is positioned no differently than you, or I, or anyone else heading into another day at the office. Sure the reams of information at his disposal are larger than the average bear’s, and his chair in the clubhouse is probably more ergonomic and comfortable than yours. But he’s mapping out a strategy for seizing glory based on roughly the same intervening variables and learned experiences that anyone else deals with. Average Boss knows who in the office is going through a rough patch, who has a skill set that matches up well for landing the Johnson Account, and who should under absolutely no circumstances be left alone with a fridge full of lunches in the break room, however well-labeled they may be.

And the good baseball manager is no different. He game-plans accordingly around the known information; he writes out his lineup card with Kiké Hernandez in the cleanup spot, because Kiké damages the ball against lefties who have fastball planes like Keuchel’s. He stays with George Springer in the leadoff spot after the glitziest of golden sombreros. And of his most live-armed-but-gassed setup man, the one who’d thrown some of the most stressful of pitches imaginable in 11 of 12 playoff games to date, he appropriately pumps the brakes:

Dave Roberts said he would like to avoid using Brandon Morrow tonight, as Morrow had pitched four times in the previous five days.

In a 1996 essay political scientist Sidney Tarrow talked about the idea of “proximate opportunity structures” impacting how and whether a burgeoning social movement will gain traction and build out the political capital it needs to develop legitimacy. The lay translation? While the intent is important, and the actors critical, the opportunity of the moment ultimately dictates much of the movement’s success or failure. Context is a powerful and determinant feature in the historical record; the theory is but a thought if the pen has no ink.

The context of Game 5 of the World Series is unlike most nearly all other context in baseball. Movements burble, rallies churn, and the best-laid plans get challenged in ways not anticipated. Managers are coerced into uncomfortable decisions, sometimes many hours and few innings into the thing. These are not unique experiences.

Except this time, there are three games left—at most. The historical record speaks freely of those moments in time when a straw broke the camel’s back, yet discusses with less frequency how each back-breaking straw has the weight of a million more underneath it. There are 180-some-odd games behind each decision at this stage of things, and these teams are now four-plus white-knuckled games deep into the most important series of their lives, under the strongest microscope the sport can prop up to the light. And when starters are gone, and relievers are cooked, and strike zones are incoherent, and sliders are (possibly) shot… well, there just aren’t many appealing decisions to make.

So managers end up doing things like running the guy out there who’s pitched in one game over the last month. And then this happens:

Or they run the guy out who’s pitched in every game in the last month. The guy they explicitly told everyone they weren’t going to run out! And then this happens:

After Game 1, Matt Trueblood wrote quite eloquently on the tantalizing trap of scrutinizing managerial decisions in the playoffs. It’s an important point of emphasis: The players play, and the games are won and lost on miniscule planes of synaptic connectivity when they’re not decided by utterly, completely random chance. And the biggest problem for managers this time of year is that there are an awful lot of guys in that second bucket, who’ve been pushed beyond the comfortable ends of their physical capacity.

The adrenaline patches together some of the tatter, to be sure. That stuff is hardly a failsafe serum in its own right, however, and it poses its own set of proximate challenges – none bigger than convincing players that a moment is ripe for their kind of revolution when the historical record quite clearly comes to show that it was not.

Roberts said Morrow called from pen & said he felt good enough to pitch if they got lead. “Credit to him that he wanted the ball.” #Dodgers pic.twitter.com/5c0d6fom9I

That’s just it, though. Morrow certainly didn’t look “right” during his ever-so-brief stint, in the sense that his location was poor, his velocity was down a couple ticks, and the vertical movement on his heater was lacking just enough oomph to where, dependent as it is on a “rise” effect for its vitality at finish, it wasn’t quite there. Or at least it wasn’t on the three fastballs he was able to deliver, anyway. A tricky thing, to extrapolate important conclusions on the back of three pitches.

This is, of course, the inherent issue with results-based critique, and the heart at which Matt so eloquently got. We know a manager’s job involves putting his players in the best place from which to succeed, and in this particular case we know that Dave Roberts probably didn’t do that. What we don’t know is the degree to which Morrow could have succeeded anyway under different circumstances. A first-pitch take by Springer, or perhaps a call by Barnes for that get-me-over slider Morrow landed on this year with over a third of his first pitches to right-handed hitters…either of those might’ve just served to set the entire outing unfolding along exactly the opposite trajectory. It is not as if Morrow’s 96 mph effort was an embarrassment to the fastball moniker.

This is all to say nothing of reactive, or perhaps self-imposed tactical limitations by the players once placed into their positions of influence. As alluded above, the talk of the day leading up to the game centered on a report that pitchers from both sides had indicated in strikingly consistent and blatant tones that the balls in the World Series were different from the regular-season balls, in both tactile quality and, correspondingly, result. Brad Peacock certainly did his part to pour some fuel on this fire, and Kenley’s cutter looked lost in the Texas wilderness.

But alas, Jeff Long and the folks in our stats department ran the numbers, and unsurprisingly found little evidence to support the claims of effective difference amid the noise of a targeted postseason sample. Pitches have largely moved the same in the post-season as they did during the regular season, caveating the variance of individual pitchers whose efforts may or may not be related to the ball or any one of a thousand other reasons—workload-related and otherwise. But regardless of actual outcome, there’s an important quote from Charlie Morton buried within that Verducci piece:

“Tonight, it’s the World Series,” he said. “So you do everything you can to block out everything. You’ve got to focus with every pitch. But I don’t know, maybe it’s the placebo effect, but if that’s what you’re thinking about it does affect your conviction on certain pitches.”

Beyond just the known variables of the office dynamic, our managers have to grapple with the specter of the known unknowns impacting the pace of play. The question isn’t just: “Is the ball different?” It’s also: “Does Pitcher X think the ball is different, and is that going to affect his conviction on certain pitches?” And both men managing teams in this World Series surely would love the luxury of pondering the answer to that (and many other) questions about the guys in their respective bullpens. Except this time, there are two games left, at most. They’re flying to L.A. on the back end of one of the wildest games in recent baseball history, and boy are their arms tired.