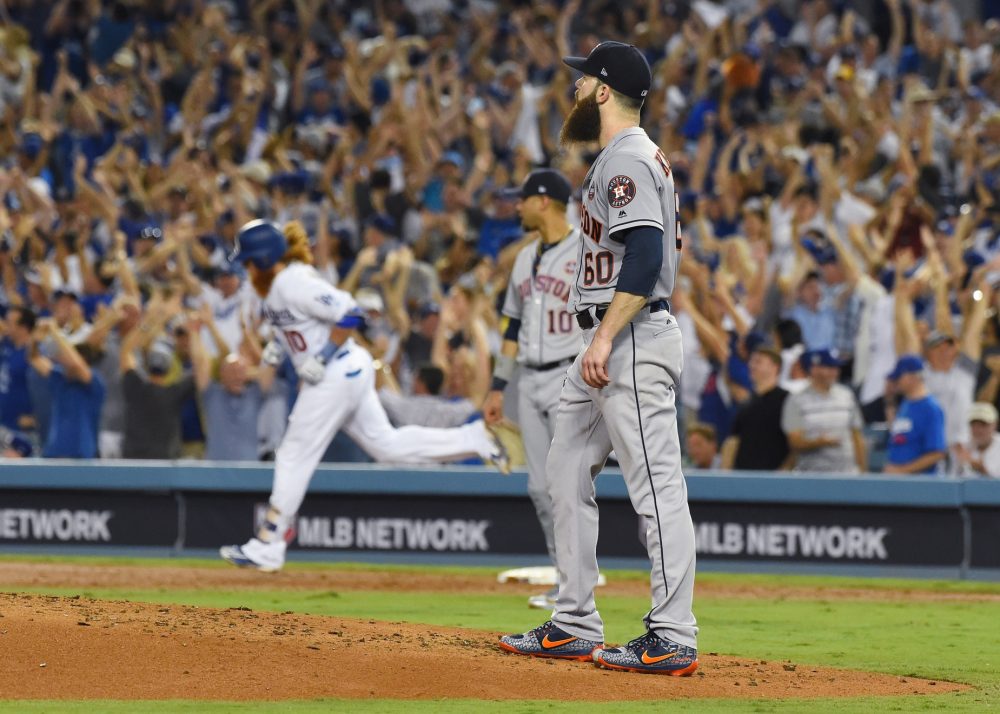 In October, we spend too much time and energy talking about managers. We sharpen our focus on every decision they make, until we find that it’s possible to argue against almost every move they make. We harp on the same analytical hobby horses over and over, fit the facts to our preconceived ideas about optimal strategies, and generally get lazy. The number of times we criticize a skipper for letting his pitcher hit in the middle innings, letting him face the opposing batting order for a third time, or using anyone other than his relief ace at some non-traditional high-leverage juncture far exceeds the number of times that second-guessing (or even first-guessing) is actually justified.

The chaos of the playoffs and the extreme importance we attach to every outcome on this stage invite us to project artificial agency onto guys who aren’t even on the field. We hate the idea that these games are determined by chance, but because these few games are supposed to count double, we also hate the idea that they’re determined by talent or poise or the ephemeral brilliance of a heads-up defensive play. We try to make them about decisions, because decisions are controllable and individuals are accountable for them.

In this space, I’m going to talk about a decision that cost the Astros Game 1 of the World Series. I just wanted to start by acknowledging that we all over-fit this kind of analysis to games from time to time, and to highlight the extent to which we put too much of that on managers. I’m going to discuss a decision made solely by two players on the field.

Dallas Keuchel pitched brilliantly in Game 1, for the most part. He had injury issues this season, but when healthy he was more or less his usual, excellent self. Both his ERA and DRA suggest he was almost the same Cy Young-caliber stud he was in 2014 and 2015, rather than the solid-but-unspectacular starter he was in 2016. Somehow, he set a new career-best for ground-ball rate, despite having already been one of the best worm-killers on the circuit.

Here are a couple other crucial things to know about Keuchel:

1. Hardly anyone dominates left-handed batters the way Keuchel does. This season, lefties had 117 plate appearances against him, and hit .145/.190/.245. That .153 TAv was the fourth-lowest against lefties among the 295 pitchers who faced at least 100 such hitters.

2. Keuchel has the best command in baseball. That’s debatable, of course, but it’s a pretty easy case to make. He not only induced more ground balls than any other starting pitcher, but induced the third-lowest average exit velocity of the 99 pitchers who allowed at least 400 batted balls. Getting that kind of low-value contact consistently is one mark of elite command; another is negotiating a wide strike zone by hitting the catcher’s mitt and making it easier to frame pitches. At that skill, Keuchel is also the best in baseball. In fact, 355 pitchers threw at least 50 innings this season, and Keuchel’s Called Strikes Above Average rate of 4.05 percent was the best in baseball—by a huge margin.

He does all of this without spending much time actually in the strike zone. We have another stat, Called Strike Probability, which is mostly a measurement of a pitcher’s style. We assign a CSProb to each pitch a pitcher throws, based on the location, movement, and other factors; their seasonal CSProb is the aggregate of those individual data points. Keuchel, who works the bottom edge of the zone and tries to slowly draw hitters out of it, had the third-lowest CSProb among those 355 pitchers in 2017.

When Keuchel reached the sixth inning on Tuesday night, he was still doing all of this well. Improbably, he was matching Clayton Kershaw inning for inning. It felt like Kershaw was much more dominant, but as usual Keuchel was subtly shutting down the opposition. He got the first two outs of that inning pretty easily, on a first-pitch ground out by Austin Barnes and a fourth-pitch ground out by Kershaw. That brought Chris Taylor to the plate. It was the third time Keuchel was seeing Taylor, and like the rest of baseball this October, Keuchel was having a hell of a time getting Taylor out. He’d homered in the first inning, and although he’d lined into a double play in the third, he’d hit that ball hard, too. Keuchel and catcher Brian McCann decided, with the bases empty and two away, to pitch carefully to baseball’s newest superstar.

Keuchel threw Taylor a first-pitch slider, low, and Taylor let it go. He then went inside with a fastball, but missed. The third pitch was a good one, a cutter that got in onto the corner and even a hair off it, but Taylor fouled it off, well foul but into the upper deck down the left field line. One thing about that cutter, though: he missed up with it. McCann set his target low and in, but Keuchel threw it more up and in. He dug a little deeper into his bag, then, and tried a changeup, but it missed low and (again) Taylor watched it. On 3-1, Keuchel tried to go to his bread-and-butter pitch, a sinker, and he might even have found the upper, outer corner of the strike zone, but he badly missed his spot with it, trying to throw it low. Taylor walked.

That was a great plate appearance by Taylor, but it was also good work by Keuchel and McCann. There was no reason to attack Taylor in that situation. The walk was harmless, and on the spectrum of Taylor outcomes this fall, it was downright desirable. The next batter up, however, was Justin Turner.

Let’s stop for a moment and appreciate how far we have come, and how quickly, with regard to lineup construction. Many teams’ best hitter seems to bat second these days, at least some of the time, and managers don’t worry overmuch about separating their best hitters with a hitter who comes from the other side of the plate, nor providing any of those guys with table-setters. Almost league-wide, the best hitters get the chance to bat most often, and it’s paying huge dividends. On Tuesday night, the walk to Taylor brought up Turner, because Dave Roberts has not overthought the thing.

Anyway, Turner was due next, and Keuchel started attacking him inside, where he’d had the most success with Taylor. He threw him one cutter inside, a pitch that nearly found Turner’s knee. (Turner stands right on top of home plate.) Then he threw him another, a good pitch located just a little closer to the corner in the same spot, and got a whiff. On the third pitch, he and McCann took advantage of the generous strike zone with which they were working. Keuchel dotted his spot with one of his trademark sinkers. It was probably low and maybe outside, but it was called strike two.

In hindsight, one wonders whether McCann and Keuchel even wanted that call, and whether maybe getting it doomed them. To that point, they’d had a good confrontation with the Dodgers’ best hitter. Keuchel was working carefully. McCann calling those two straight cutters was questionable (Keuchel had just missed up with one of those in the previous plate appearance), but it had worked. Now if they could just keep working Turner low and away, below the zone whenever possible, they would be home free. They might not get Turner, but they had a clear path to the end of the inning.

Remember, Keuchel has a whopping platoon split. He’s death on lefties. Standing in the on-deck circle as Turner batted was Cody Bellinger, a left-handed hitter whom Keuchel had retired on ground balls in each of his first two plate appearances. The odds of Bellinger coming up with a huge hit off Keuchel were much smaller. The plan for the whole of Turner’s plate appearance should have been what it was on that 1-1 pitch: sinkers and soft stuff, away, away, away, low, low, low.

Turner is a great hitter, and unless he got antsy and guessed wrong on a three-ball count, he was unlikely to get himself out. But with Bellinger waiting, Keuchel and McCann didn’t need Turner to get himself out. They just needed to avoid making the kind of mistake on which Turner could change the game. They got that strike two call, though, and that led McCann to call a third inside cutter. Keuchel threw it, and for the third time in six pitches, he missed, up. The game was practically over, right then and there.

You can’t blame manager A.J. Hinch for that error in judgment, because Hinch didn’t tell McCann to call those pitches. You can’t blame pitching coach Brent Strom, because he had very little cause to even consider a mound visit at that moment. McCann and Keuchel worked through the whole sequence of Taylor and Turner without a mound visit, though, and that’s something for which I might blame them. They got into such a mode of competing and focusing on execution that they failed to take a step back and realize their best way out of the inning.

They fell into the (fun, brisk) pace of the game and forgot why there have been so many mound visits and so many excruciating at-bats this season, and especially this month:

A pitcher who hits his spots as often as Keuchel, and who succeeds so much because of his ability to out-think hitters, shouldn’t lose with his third-best pitch in a two-strike count, especially if the next hitter is a much better matchup. The Astros’ battery got caught looking at the trees, instead of the forest, and Turner laid the lumber on them.

You need to be logged in to comment. Login or Subscribe
Michael Edler
Thanks for this write up. I too wondered why even give anything to Turner to hit? Hinch didn't do the super brave move to pull Keuchel for a pinch hitter at the top of the 6th. Therefore, Keuchel has to get through that inning to justify the non-move at the top of the inning. So...pitch down & away to Turner and take on Bellinger with 2 on.
Reply to Michael