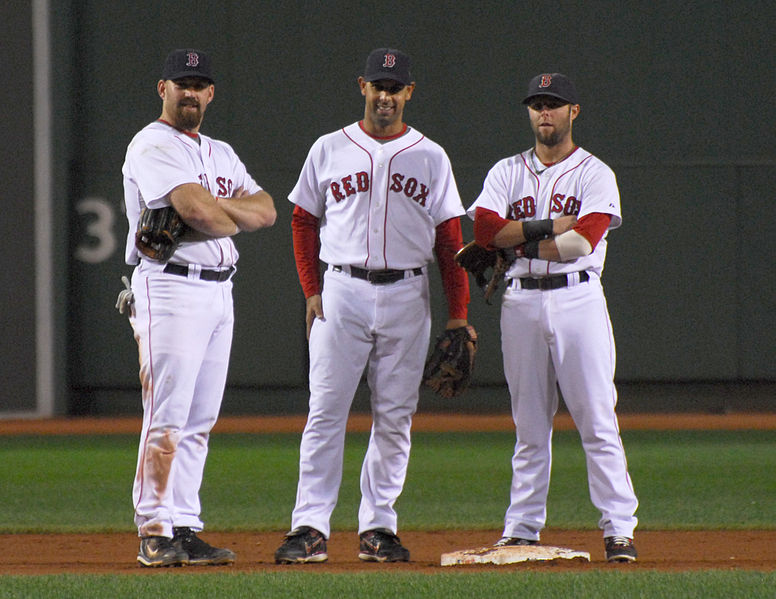 “F***, I don’t want to know anything anymore. This is a world where nothing is solved. Someone once told me, ‘Time is a flat circle.’ Everything we’ve ever done or will do, we’re gonna do over and over and over again.”

Alex Cora had only hit .238/.312/.298 the season before, but for many Red Sox fans in 2007, that was enough to make him the starting second baseman. Cora was steady, cerebral, and well-liked, with a penchant for knocking timely hits. The stacked Boston lineup could survive a down-the-order hitter who was good in the field and could do all of the little things right. Besides, his replacement, a prospect named Dustin Pedroia, looked terrible in his cup of coffee to end the 2006 season. Pedroia was small and relatively unathletic, and hit .182/.308/.236 in April of 2007. Why not go with the veteran?

Flash forward to present day and, well, now we know why. Fortunately, manager Terry Francona knew better and gave Pedroia the long leash he needed to win Rookie of the Year, then MVP, then become the co-face of the franchise as he collected two rings (and counting). Fortunately, Cora had enough grace to understand that his time as an everyday player was over. And most fortunately of all, Pedroia had the talent to justify the decision.

Cora’s aforementioned grace is a big part of the reason he’s had the “future manager” label since three or four seasons before he even retired. We can remove that “future” part now, as Cora was officially named the next manager of the Red Sox on October 22, signing a three-year pact to take them from contenders to winners.

And what’s one of the first assignments he will face in his new duty? Figuring out how to handle, and perhaps ultimately replace, Dustin Pedroia.

First, let’s talk more about Cora. He’s currently the Astros’ bench coach, and also managed the Puerto Rican team in the World Baseball Classic, but Cora has no MLB managerial experience. He’s the first minority manager of the Red Sox, which is cool and overdue. His time in Boston, however brief, is how Red Sox ownership is selling him to a fan base that just ran a World Series-winning manager out of town. We’re told his intelligence, relative youth, and skills as a bilingual communicator are why he’ll succeed at connecting with a young and increasingly diverse Red Sox roster.

He very well might. The Red Sox are good and young and rich. The team is loaded with star power and up-and-coming players. They just won back-to-back AL East titles for the first time ever, and while you can argue that the Yankees are better set up for long-term success, the Red Sox should also be big-time contenders for the next few years at minimum. The Red Sox have a capital-A Ace (Chris Sale) and a capital-C Closer (Craig Kimbrel), and one of the best young position players in the game (Mookie Betts). For those reasons and more, this was a very attractive job.

Yet you’d forgive Cora if he had any hesitations about accepting this role, because there are few positions in baseball that are more demanding. As John Farrell just found out, the goal in Boston is not to be a good team; it is to be the best team. Anything short of a World Series victory is a failure, and even making it to the mountaintop only buys you a brief window of job security.

The infamous Boston media is infamous for a reason; expect Cora’s grace period to last about two weeks. His first bullpen move that doesn’t work out, his first poor pinch-hitting decision, his first bad shift—he’ll be bashed for all of them. Boston is also home to a vocal minority of fans who enjoy making it difficult to work in their city. They are surely less sated by the firing of Farrell than they are hungry for the first chance to tear Cora down. Every manager’s job is stressful, but in Boston it can be particularly so.

And then, of course, there’s the roster itself. The Red Sox have some big personalities. Cora will need to navigate a roster that features David Price, Hanley Ramirez, Chris Sale, and others who, however fairly or unfairly, have been labeled as difficult at some points in their careers. He will need to work with a rotation that has a lot of question marks behind Sale and Drew Pomeranz. Most importantly, he will need to get the most out of young players like Xander Bogaerts, Mookie Betts, and Eduardo Rodriguez, who all took steps back in 2016.

Oh, and he’ll have to do all of that while reducing the playing time of the longest-tenured, most popular, and most fiery player on the team, Pedroia. Yes, just as Pedroia once replaced Cora, Cora must now figure out the best way to transition out of the Pedroia era. I guess Rust Cohle was onto something.

Pedroia isn’t done as a player. He hit .293/.369/.392 this season, and while his power and speed are gone, he’s still an average to above-average defender. But news broke earlier this week that Pedroia will miss seven months after having surgery on a knee that bothered him somewhat before and a lot after the Manny Machado incident. Pedroia will not play for the Red Sox until at least May or June, and that’s a best-case scenario.

In some ways, that means Cora will have it easier in April and May. Whether the Red Sox look internally and hand the job to Marco Hernandez or Brock Holt, or they re-sign Eduardo Nunez, or they find a stopgap solution like Chase Utley or Brandon Phillips, Cora will know who to play at second base. It’s what happens when and if Pedroia comes back that will truly put Cora to the test.

Time waits for no man, but it’s especially harsh on second basemen. Even if Pedroia had entered this offseason without the need for major surgery, someone was going to need to sit him down and have a talk. Now 34, Pedroia has averaged just 121 games over the past four seasons, as the dreaded second baseman’s aging curve has begun to take effect.

Pedroia posted the worst BRR of his career in 2017 (-5.7) and has cost the Red Sox nearly 10 runs on the bases over the past two seasons combined. His days trying to take the extra base or execute straight-up steals should be over. A once-sparkling defender, FRAA had Pedroia as an average defender in 2017 and a slightly below-average one in 2016. Even if the eye test puts him a grade higher, his days of vying for Gold Gloves are likely behind him, too.

Perhaps the biggest unknown with Pedroia is his power. As recently as 2014 it looked like Pedroia’s pop was sapped for good, but he enjoyed a big resurgence in 2015 with only a modest decline in 2016. The bottoming out of his ISO in 2017 (.099) could be a sign of things to come, or it could be largely a function of him playing hurt. Either way, Pedroia probably no longer belongs in the top-third of an order that features hitters like Betts, Bogaerts, Rafael Devers, and Andrew Benintendi.

Therein lies Cora’s biggest immediate challenge. Pedroia is signed through 2021, and he does not have the reputation of a player who will be quick to accept any sort of reduced role. Yet even if he comes back fully healthy in June, he’s no longer a play-every-day, set-it-and-forget-it, top-third-of-the-order hitter. His playing time needs to be managed in an effort to keep him on the field more. His role needs to be reduced. And he needs to find a way to accept that reality without disrupting the team.

Pedroia won’t like it, but if nothing else, he’ll know Cora isn’t a hypocrite. To the best of our knowledge, Cora did not kick and scream when Francona put him aside for the greater good a decade ago. He did not shun Pedroia or take out his frustration on the next generation. He took it in stride. He won another ring. And he extended his career well past the time when most of his physical gifts had left him.

Now it’s just up to Cora to convince him.