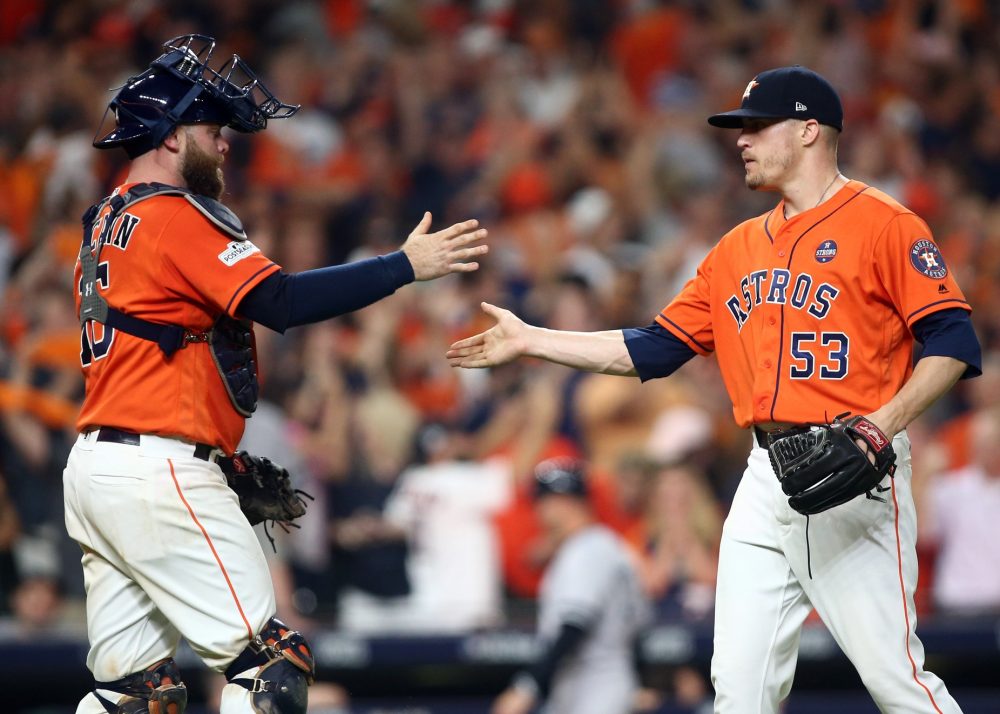 That this was a record-breaking season for home runs is clear, obviously, in the number of home runs hit (6,105). The question of how to best demonstrate what that means is a little less obvious. At the upper extreme, using a player like Aaron Judge, who crushed the record figure for a rookie season with 52 homers? Or far further down the list, using one of the scores and scores of players with a home run total in the teens—say, Jake Marisnick, with 16—someone suddenly boasting decent power after a career in which he’d never so much as dreamed of it?

The Astros’ offense was the best in baseball by many figures this year (a TAv of .281 and an ISO of .196 and a strikeout rate of 17 percent), but home runs weren’t one of them. They found themselves in second place there, thanks to the Yankees. On paper, a series between the two should have promised offense aplenty. In actuality, Game 1’s 2-1 Houston victory did not. Until there were two outs in the ninth inning, it not only had none—it had no extra-base hits at all.

Dallas Keuchel was at his best, striking out 10 over seven scoreless innings. Masahiro Tanaka was not quite at his best, though reasonably close-ish to it—somewhere in the loose vicinity of his very good—with two runs scoring on four hits through six innings. Closer Ken Giles backed up Keuchel’s work by striking out four in a five-out save, only the fourth time this year that he’s been called upon to go for more than an inning-and-a-third. Jose Altuve was the finest version of himself, singling and stealing a base and scoring in the Astros’ lone inning of offense (the fourth) as part of a three-hit game in which he also provided the defensive highlight of the night with a smooth diving grab:

For the Yankees, highlights were in relatively short supply. Greg Bird created one—his ninth-inning, last-chance solo shot to let the team avoid the indignity of being shut out—and he tried and failed to supply another. Here they are …

Greg Bird is not fast. By Statcast’s sprint speed metric, he’s the Yankees’ second-slowest runner. (Only Chase Headley is slower.) In the top of the fifth, trailing 2-0, they tried to send him from second base on a two-out single to left field. It didn’t work.

There are a couple of arguments you can try to make for that send, though most of them ring a little hollow, especially when one considers that Gary Sanchez was waiting on deck: it’s a close game, the opposing starter is dealing, runs are at a premium, you do what you can, all of that, sure. The only argument that holds a little more water here is the fact that it was Marwin Gonzalez fielding the ball in left.

The scouting report on him in the outfield is to run, and with good reason. He has four outfield assists in his career, and as BP alum R.J. Anderson figured out over at CBS Sports, he managed to throw out just one lone baserunner at the plate this year in situations where a guy was on first with a double hit, on second with a single hit, or on third with a sac fly hit. (Out of 38 such situations, 19 guys tried to run on him.) Even with a player as slow as Bird, running on Gonzalez … is still not the best decision, but it’s maybe a little more defensible. And, anyhow, the outcome beat the process regardless.

Here is the relationship between fans’ hope and the number of ninth-inning outs for the losing team in a two-run game, based on sophisticated data analysis. (It’s based on my feelings).

No outs: this is happening, it happens all the time, “a bloop and a blast,” right? they’ll win, of course they’ll win, what is the point of being alive if not to dig myself into this little moment where I am so fully and ridiculously sure of a golden future where they will win

One out: that’s nothing, only serves to make the story better

Here is this information in graph form: 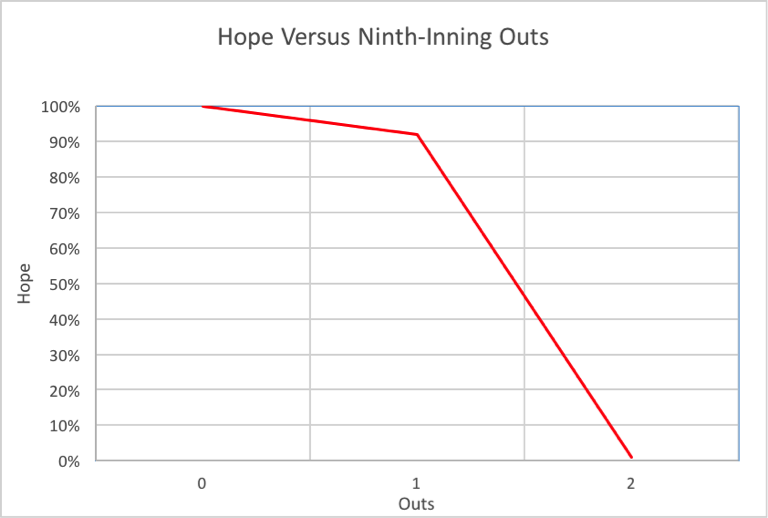 By the time that Bird came to the plate in the ninth, with two outs and Giles on the mound, hope felt a little extravagant. And this still felt somewhat true even after his home run—which made it a one-run game and saved them the disgrace of being shut out—for due up next for the Yankees was the DH slot in the lineup, an ordinary harbinger of offense that has been the opposite in the playoffs so far. Jacoby Ellsbury, Matt Holliday, and Chase Headley have shared time in the role, and they’ve all been awful: 0-for-24.