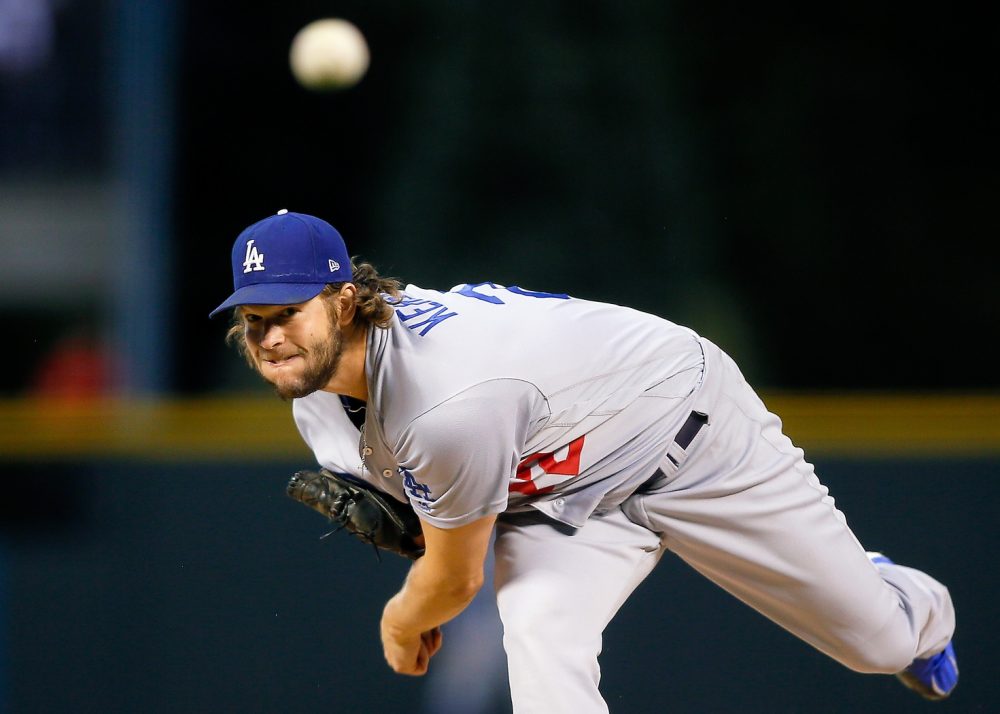 I am destined and doomed to write these previews fresh off tight, wild elimination games. First, it was the Diamondbacks vs. Rockies Wild Card tilt, and now the soul-crushing defeat of the Nationals in NLDS Game 5. Playoff baseball is wild, unpredictable, and only resembles regular season baseball in the humblest of ways. Weird rosters! Too many pitching changes! Over-analyzing of managerial moves! It’s so much fun, but so different from our everyday July baseball experience, with so much more emotional investment. As Ned Kelly (or Trevor Williams) might have said, “Such is life.”

Now with their defeat of the Nats, the Cubs take their best role: the dream-crushers and drought-extenders. Last season, they bounced the Dodgers and the Indians—two teams with extended World Series droughts—and this year they’ve once again trounced the Series-less Nationals franchise. Will this be a remix of the NLCS of last year that sends L.A. packing again, or something different? The balance of power appears to have shifted, with the Dodgers as the juggernaut and the Cubs as the late entry into the playoff mix. With home-field advantage and plenty of rest, L.A. has to be the early favorite, but in the playoffs nothing is ever certain.

Writing in lineups here is kind of a fool’s errand, because as we both know, these two teams are gonna mix it up. Both L.A. and Chicago are notorious for mixing and matching based on platoons, positional versatility, and matchup specifics. I’m running here with what I’d consider a “normal-ish” Cubs lineup versus left-handed pitching, thanks to the Dodgers’ southpaw-heavy staff. The only thing here is that I’ve penciled in Jay as leadoff hitter/center fielder because he went 2-for-4 against the Nats in Game 5 in that role, and has led off in the three last games. Swap him out for Albert Almora (and move Zobrist into the leadoff spot), and you’ve got one of the game’s best lineups for beating down left-handed pitchers.

For someone who won the MVP award last year, I’m not sure Bryant is getting his due. He’s approximately 50 percent better than league average as a hitter against both northpaws and southpaws, can shift all over the diamond as needed to accommodate Joe Maddon’s whims, and he’s even better on the road than he is at home. When paired with Contreras’ .523 slugging percentage against lefties this season, the Cubs feature a heart of the lineup that could perhaps even shake L.A.’s fearsome starting pitching.

Update: Corey Seager was left off the Dodgers’ playoff roster because of a back injury.

On the other side, I’ve run with the Dodgers lineup that opposes right-handed hitters most often, even though the Cubs’ starters run two lefties and two righties. Granderson and Utley will likely sit in Game 1 in favor of Enrique Hernandez and Logan Forsythe. This lineup is Fort Knox—there’s no getting through its walls—and it took an exceptional performance by a former teammate who knows the order inside and out (Zack Greinke) to keep the Dodgers from scoring fewer than eight runs in any game during the NLDS.

The top of the Dodgers’ order is the terrifying part—and they did predictably well against the Diamondbacks in Round 1 of the playoffs—but over the last three games #PuigYourOffense. The oft-derided right fielder has had a heck of a comeback season, and thrilled in the NLDS with three singles, two walks, a double, and a triple. If he stays hot, Cubs pitchers will have to deal with two potent heart-of-the-order-caliber threesomes before making it to the seventh hitter in the lineup. Even if you’re Kyle Hendricks or Jose Quintana, that’s brutal. By the numbers, you can see a real advantage on L.A.’s side.

The Cubs’ bench projects to roll six deep again. There are a couple of legitimate offensive weapons on this bench, and all do things slightly differently. La Stella and Almora are both capable of making contact, and Almora may be especially useful against the Alex Woods of the world. Schwarber provides instant power, and Martin is there for speed and defense late in games. Heyward certainly exists, and he’s had a bit of a bounceback season, even if he is a little superfluous, especially against L.A. I did make one projected change here that may not stick when rosters are released: I swapped out Alex Avila for Rivera. Now hear me out: Yes, I know Avila’s a superior overall hitter, but Rivera is a rare right-handed bench bat for a team that needs them. This backup catcher spot can certainly go either way, but being able to throw another right-handed hitter against the Dodgers might be essential. (Plus his defense is pretty great.)

Keep an eye out for Forsythe—who will likely start against left-handers, as mentioned above—and Barnes. Forsythe has had a lot of success against Quintana in the past, and his ability to make hard contact could serve him well. While Grandal is almost assured of a start when Kershaw throws in Game 1, Barnes received most of the playing time in the NLDS and he delivered, going 4-for-8 with a walk and a dinger. Do not be at all surprised if the on-base machine gets revved up during this series, and with Farmer on the roster, the Dodgers can afford to be much more aggressive in using both Barnes and Grandal in the same game.

I have a lot of questions about Arrieta’s effectiveness, especially against a Dodgers lineup designed to wreck right-handed pitching. His command was off in Game 4, and the Dodgers will absolutely sit on pitches out in the zone if Jake wants to dance around it. Guys like Turner, Barnes, Grandal, and even Granderson could just sit and wait him out, unless something shifts. There aren’t many question marks in the other spots, though. Hendricks looks like the team’s ace, Quintana is well-cast as a second banana, and Lester has proven that he’s even able to pick dudes off now, so this postseason has to be a win for him.

Believe you me, I’m not out here to bury the Cubs’ rotation. It’s just that when you get this deep into the postseason, all of the rotations are pretty good. The Dodgers’ rotation is greater thanks to the Kershaw/Darvish punch, and an advantage over the Cubbies. Sure, Hendricks has been very good overall, Quintana is a legitimate weapon, and this team has shown a strong willingness to throw their starters in relief often … which could be a very good thing given the overall weakness of the bullpen.

If you wanted to, you could argue that the Dodgers have the three best starting pitchers in this series in Kershaw, Darvish, and Wood. No, I’m not sleeping on Hendricks or Quintana, and I think by the end of the season you probably should put them ahead of Wood, but you can make the argument the other way as well. Raw stuff favors the aces that the Dodgers have in their hand. Darvish especially looked a lot better in his NLDS start, and the Dodgers are one of the few teams this postseason that can look to ride their starters hard rather than flipping over to the bullpen early and often.

The X-factor for the Cubs’ bullpen might just be the use of their starting pitchers in relief roles. I could see Maddon getting aggressive with using perhaps Arrieta or even Lester in short relief stints on their off days. That could be a boost to a bullpen that can probably use it. Davis is still a stud, but Edwards has gotten brutalized after appearing in every single game in the NLDS. That 23.14 ERA for the series in 2 1/3 innings is, uh, not a good sign at all. He might rebound just fine, but he also might not, and that is a huge blow to the bullpen overall.

Maeda throws gas coming out of the ‘pen, so he could be a shocking change of pace coming in as something of a caddy for Hill, and the combo of Morrow and Jansen gives the Dodgers the best pair of relievers in this series. (Though Davis’ Game 5 showing in Washington was incredible, and proves he’s still one of the best in the league.) They’ll likely roll one pitcher deeper than the Cubs, which could be useful in allowing them to be aggressive in flipping platoons, but with Chicago’s bench depth I’m not sure that makes much of a difference.

As a wise man once said: “To be the man, you gotta beat the man.” Maddon is still the man. The deciding game of the past series hinged on a bonkers challenge, and you can trust that Maddon will have the confidence to deploy his challenges, his bench, and his relievers in any fashion that strikes his fancy, tradition be damned. Roberts is no slouch himself, and both managers are likely to make moves that are well in line with the “new-school” sabermetrics orthodoxy. That doesn’t mean there won’t be nits to pick, but both of the skippers should be tweaking and adjusting throughout the series. But until Roberts makes it to the World Series (well, as a manager), you have to give the old hand a slight edge here.

L.A. led all of baseball in Park-Adjusted Defensive Efficiency (PADE), which makes them a superior defensive team by one metric: balls in play turned into outs. But I don’t think there’s any question that Chicago brings superior defensive players to the field in almost every configuration. Almora, Heyward, Rizzo, and Baez all can pick it. Russell is pretty good. Bryant gives above-average defense everywhere he plays. This is a terrific defensive squad, if not as excellent as they were during 2016’s championship season. Yes, the Dodgers’ catching duo is tremendous at stealing strikes, but the Cubs have one of the finest there too if Rivera makes the NLDS roster. This is one of the few areas where I think the Cubs have a legitimate advantage, which is nice because they will probably need it.

Once again, we probably have to give the edge to the team that won 104 games this season. Frankly, things look closer than the 12-game difference between these two teams, but Los Angeles should be a favorite. The bullpen situation might be a wash, and the best hitters on each team stack up well against each other, but almost every edge favors the West Coasters. I’d peg the Dodgers to hold serve at home and take a game at Wrigley, so Dodgers in six.