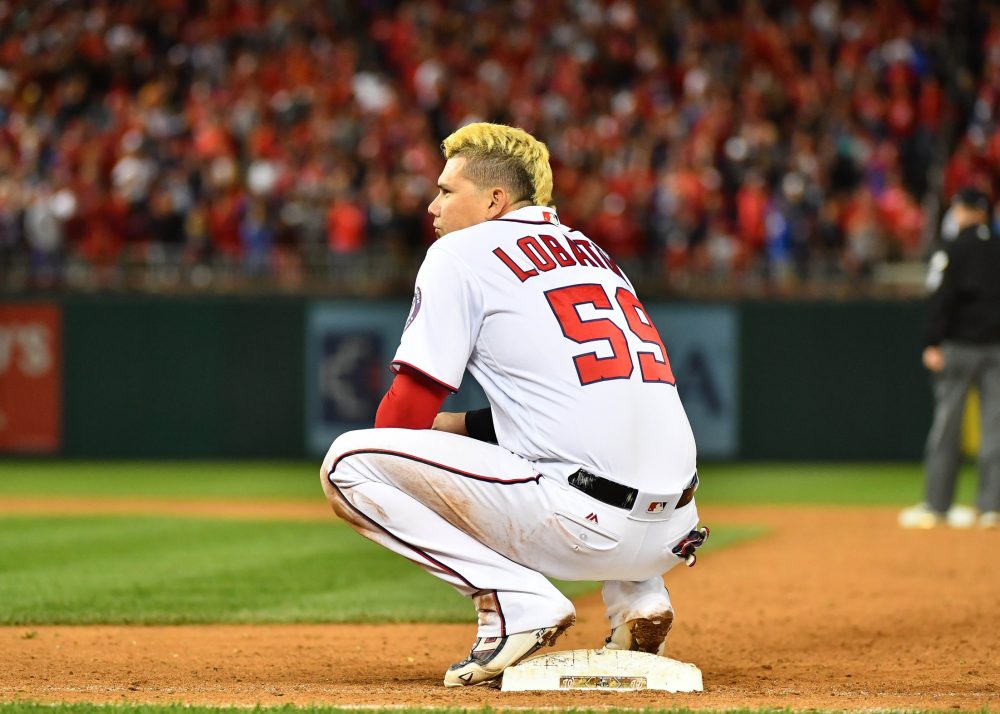 When I was a kid, I took bad endings to Choose Your Own Adventure books very personally. What good was it to be a space explorer or a mountain climber or a private eye if I was going to end up split in half by a transdimensional portal? I’d end up with a stinker, and go back and try to trace where my adventure had gotten off track. I had to know what might have been different “if only …”

It’s an impulse familiar to other games. As baseball fans, it is one of the great hobbies of October, when we agonize over the defeats, probing the highlights for a different turn, a different bounce, anything that might have amounted to a different outcome. We exhibit baseball imagination. “If only …”

But as adults, we don’t indulge transdimensional portals like we used to. There are rules and limits to our imaginations; in fact, as Daniel Kahneman, a subject of Michael Lewis’ The Undoing Project, discovered:

Imagination wasn’t a flight with limitless destinations. It was a tool for making sense of a world of infinite possibilities by reducing them. The imagination obeyed rules: the rules of undoing. One rule was that the more items there were to undo in order to create some alternative reality, the less likely the mind was to undo them.

If only I had gone to a different college; if only I had taken that job; if only he hadn’t thrown that pitch, those are undoings we understand. Each successive “and” after our “if only” makes the task of creating an alternate reality harder; there’s just too much to undo.

Not only are there limitations on the effort the mind will put into an “undoing,” but Kahneman identified other tendencies, as well: “We tend to have a hero or an actor operating in a situation. Wherever possible we’ll keep the situation fixed and have the actor move.” We need a space explorer, a private eye, a pitcher. The Nationals lost Game 5 of the NLDS. To mentally undo the damage in this game isn’t difficult. We have several actors at our disposal, traversing fixed situations. What might their alternate timeline have been, if this one could be undone?

Have you ever had to explain baseball to someone who doesn’t know the rules? Think about all the parts of watching games that are just muscle memory. Think about where you’d start. You don’t realize how hard it is to explain the whole thing, until you try to explain the first thing. Maybe you start with “this is an out.” Wait, go simpler. You have to build an out. They get three strikes; they get four balls. In a “strike zone.” There’s a pitcher. He throws the ball.

Imagine the hours spent explaining that while the bases are the same distance apart in every ballpark, the fields aren’t all the same size. Imagine how that’ll bake their noodle. It’s a big responsibility; they’re trusting you to guide them. But you’ve talked about that stuff your whole life. You can do it. Then your friend tells you they want to watch the NLDS, and things begin to escalate.

First, there’s the uncaught third strike. You told them a batter gets three strikes. You told them if the batter swings at the third strike and misses, the batter is out. But there’s a passed ball and there’s Javier Baez at first base because of the dumbest rule in baseball. And there’s Baez at second because of the throwing error. You can score like that? Your friend looks suspicious. What kind of game is this?

Then the camera pans over to a bewildered Matt Wieters, pleading his case to the home plate umpire. “That hit me, that hit me on the backswing!”

Wieters is your best pub night trivia friend. What does he know that you don’t? You nervously page through Twitter. Crap. Baez should be out. Do you tell your friend? You’re reminded of the first time you babysat your siblings when you were 12, and you totally knew more about the world than they did, like, how to turn off the stove, and they bought into your authority until you burned the mac n’ cheese. 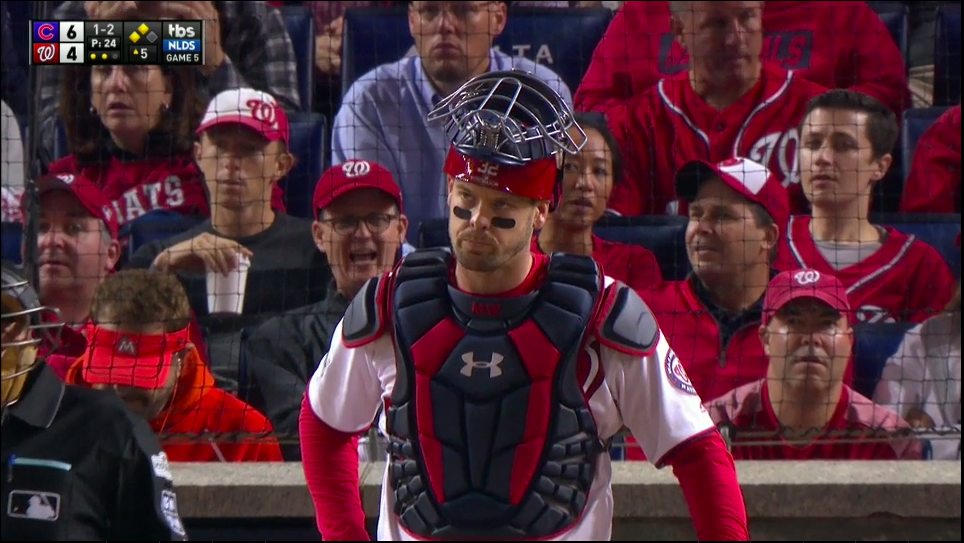 This play was scored as a double on a line drive to center fielder Michael Taylor.

Thirty-eight years old isn’t old by human standards, but it is old by baseball standards, so I feel comfortable saying that one of the disappointing things about aging is diminished expectations. You shouldn’t climb that, you shouldn’t drink that much, is fixing this really worth it? It’s disappointing because it’s true. It’s not so much that Jayson Werth erred as it is that perhaps, in a broader sense, this truly constitutes ordinary effort.

There was a moment just after Bryce Harper crossed home plate when I assumed that Ryan Zimmerman must have fallen down somewhere around third base. The camera pans away to Ben Zobrist in the outfield, and immediately back to Harper at home plate, and Harper turns around, all ready to go “YEAHHHHH BUDDY!” to a scoring Zimmerman, only Zimmerman is 90 feet away.

Zimmerman has to score there. There are two outs and he’s going on contact. He has to score. He at least to try. Doesn’t he, Daniel Murphy?

I assumed that Zimmerman had fallen down. I was prepared to feel bad for him, because he’s slow, and going first to home is the sort of thing that makes a slow person winded and sweaty, and I hate being sweaty in front of people. You feel so gross and sweaty. I assumed the camera would pan out, and he’d be crawling back to third base to avoid a tag. I assumed he’d look like a crab, tipped and embarrassed. But something worse happened. He didn’t go at all. He wasn’t a crab; he was a turtle.

In my office, we have a gentleman whose job it is to review and approve everyone’s expense reports. He has an important role; we’re a non-profit and you wouldn’t believe the statistics on workplace fraud. But he once returned a report of mine over a 50-cent discrepancy between the dollar amount I keyed into our system and the dollar amount on my receipt. He also makes me itemize the alcohol for holiday parties on a separate line even though it’s on the same receipt as decorations, which I never remember to do. He’s technically right, but functionally irrelevant.

In the eighth inning, with two on, and two outs, Willson Contreras picked off Jose Lobaton at first base. This is how the play looked in real time. A normal baseball play!

This is how it looked from the first replay angle.

Maybe a baseball out? Lobaton comes off the bag; Rizzo’s tag comes off Lobaton. It isn’t overwhelmingly obvious one way or the other. There’s nothing that says Trea Turner brings either baserunner home. But you have to wonder. Replay has introduced necessary precision to the game; the folks at home can’t have a better view than the umps. I’m just not sure that we want baseball to feel like my expense report.

These moments had the potential of undoing; an opportunity for erasure. Erasure of disappointment, of lost seasons, of also-rans. One or two of them breaks the right way, and suddenly Nationals fans are free. They don’t want to trace their fandom back to the beginning of its story and perhaps look down a different path. They’ve unfurled an alternate timeline; they’re on a moon adventure; they’re pirates finding gold at the end of their story; they’re boarding a plane to L.A.. Any one “if only” might have been overcome. But as Bryce Harper struck out, and the Cubs took the field in victory, all that could be said was the that chain of undone moments became a familiar, final undoing.

You need to be logged in to comment. Login or Subscribe
jsdspud
Regarding the Lobaton getting picked off, looking at both replays I am still not convinced that his pant leg wasn't in contact with the base. I am not sure how they were able to overturn the call. The bottom line is that Lobaton shouldn't have been that far off the base.

That being said, what a play by Rizzo and Contreras. The timing was absolutely perfect.
Reply to jsdspud
megrowler
Agreed on all counts-- I was surprised they overturned the call given what the standard is (or is supposed to be). Not sure what he was thinking drifting so far, and man, was that a good throw.
Reply to megrowler