World champion curler Lisa Weagle recently did an interview with curler-slash-comedian John Cullen for a recurring interview segment he does. Among his Proust questionnaire-type questions for each of his subjects is “What’s a stupid thing you incorrectly believed was true for a long time?” Weagle’s answer was that growing up she assumed her dad and Dennis Eckersley were the same person.

"My dad and Eckersley had the same handlebar mustache in the late 80s/early 90s, and there was always baseball on in my house as a kid. I knew that my dad played baseball—albeit recreationally—but I was young enough to just assume that was the major leagues. So one day, Dennis Eckersley was pitching on TV, and I just said, “Oh there’s Dad!” He happened to not be home at the time, so my mom played along, and it went on for quite some time." 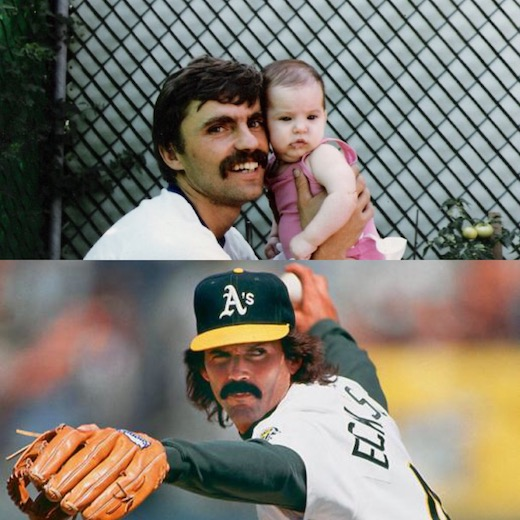 Now, in fairness to Weagle, both of these pictures are Dennis Eckersley.

But there are a few ways to tell if Dennis Eckersley really is your dad. If he got up with you when you were little then just spent time with you in the evenings as you aged, that’s a clue. If David Price bursts into your room and starts berating your dolls, you’ve probably cracked the case. Did he name drop you in your Hall of Fame speech, specifically referring to you as your kid? Throw out the DNA kit, it is no longer necessary.

Eckersley fatherdom confusion is thankfully controlled with today’s youth mostly through herd mentality, but also most kids can’t stay up to watch Red Sox post-game studio segments, though a few have a suspicion that Eckersley is their neighbor. But what about today’s players? How many of them have child fans incorrectly believing Daddy plays sports on TV? We polled 100 confused area preschoolers:

2%: Refused to answer the poll, citing concerns of polling inaccuracy

The New York Times’ Sunday wedding announcements have long been called the women’s version of the sports pages, which is stupid and condescending, but there is maybe something valid in drawing a more general equivalence between the two entities. For me, at least, they were always equal. As a kid, I treated both with the same reverence, poring over them with an practiced intensity that made me feel way more grown-up than I had any right to. The way that I love them has changed as I’ve gotten older—having realized that there are statistics more meaningful than the ones printed in the final columns of the box scores, and that much of what I’d once taken for glamour in the wedding announcements is more eyeroll-inducing snobbery than anything else—but my love itself hasn’t diminished. Each has a structure and language and set of customs all their own, strange little art forms in and of themselves.

But my favorite wedding announcement isn’t from a Sunday edition of the Times. It’s from the Washington Post, published on June 25, 1914:

There’s a reason that these are labeled wedding announcements rather than marriage announcements: they’re usually not so much about the union itself as they are the ceremony around it. They are not about being in love—not in any meaningful sense, not about love as a state of existence or a conscious decision or a continuous action—but rather about love as performance. These announcements do not typically concern themselves with who the bride and groom really are (familial and educational and professional accomplishments are listed in lieu of anything relating to a personality) or why they have chosen to get married in the first place. That’s not the point. To acknowledge those very real and intimate and therefore messy things would be to see the wedding with nuance: to write about it as an inflection point, an event with a past behind it and a future ahead of it. Wedding announcements aren’t for that. Wedding announcements are for happy endings, which can only exist if they’re self-contained.

Walter Johnson’s wedding announcement is very much in this vein, with all of the tropes that entails. It is perfect. 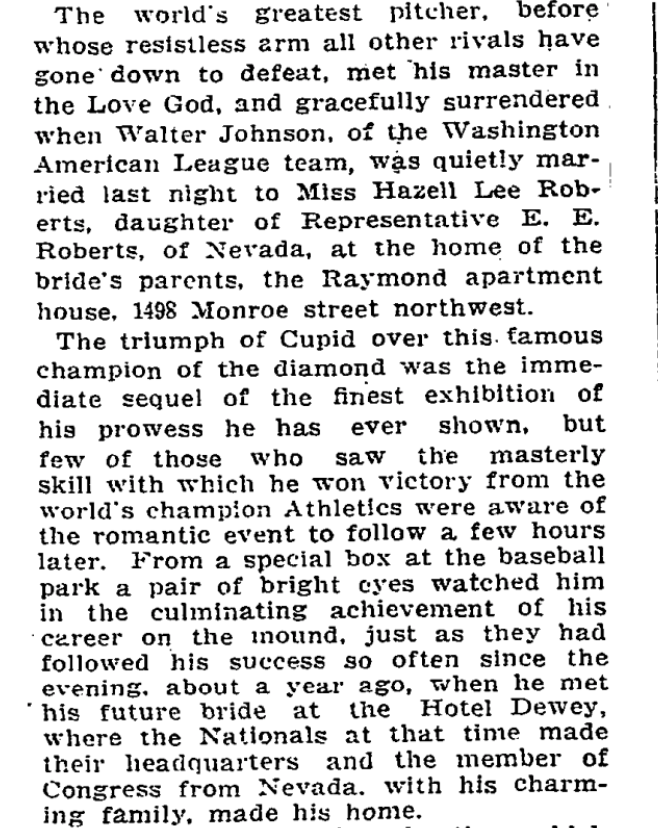 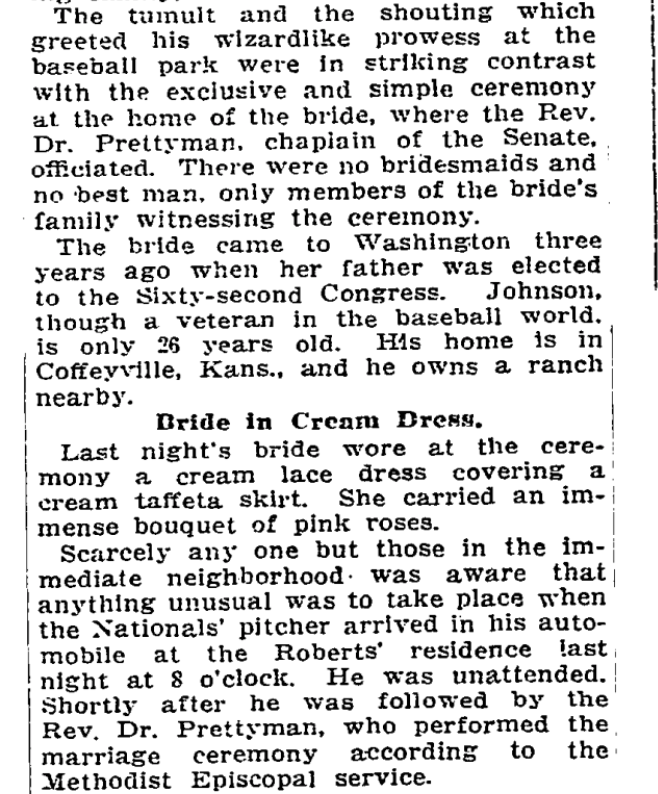 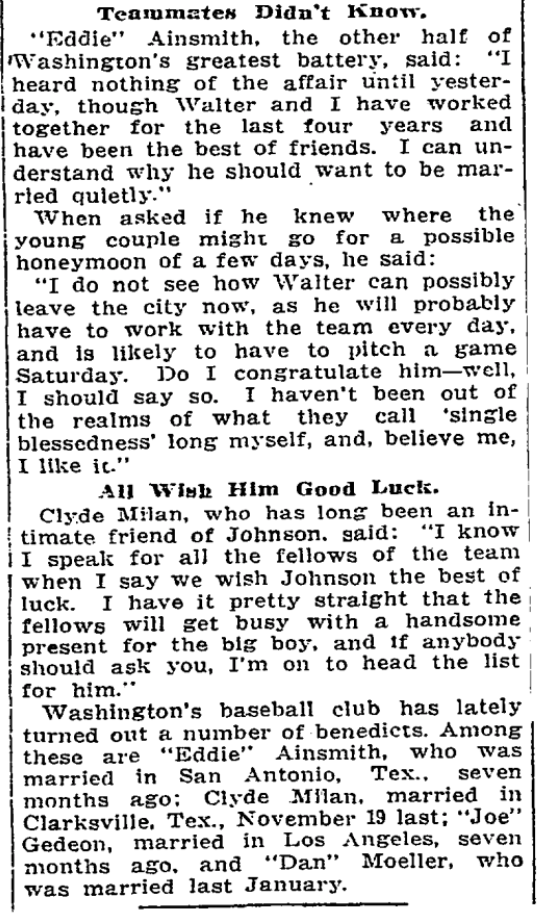 The ritual here is old-fashioned—now, certainly, but even then—and there's plenty about it that's arbitrary or silly or excessive. That’s just as true of baseball as it is of weddings. But even when the custom has little inherent meaning in and of itself, the act of performing offers a significance all its own.