It wasn’t all that long ago that Wade Miley was one of the least interesting pitchers in baseball. On the stat sheet, his results and peripherals conspired to paint the picture of a steadfast second-division fourth starter, a sacrifice at the altar of the 162-game season. On the mound, Miley hunches into an indistinct figure, wearing an unrepentant expression; the shuffling feet of a delivery almost like an afterthought, as if an invisible pitch clock reached zero. It’s a performance designed to be forgotten, a middling opening act for a headline band that never takes the stage.

This season has marked the culmination of a life’s work of being Wade Miley, the experience and the attrition. Little, out of hand, has changed: he still throws the same four pitches—fastball-slider-curve-change—the same amount of the time at the exact same speed. He still strikes out a few batters less than average, gives up a few too many hits. He should be able to keep his head barely above water forever like this, starting the fourth game of the regular season for the 2025 equivalent of the 2017 Padres. Only, Wade Miley has stopped being boring; he’s become interesting in the worst possible way. Wade Miley can’t throw strikes. Well, he can throw strikes. But he also can’t.

Not throwing strikes is what all the cool baseball-throwing kids are doing these days. With power up for whatever reason, the relative cost of the ball in play is equally increased. Extending that logic, pitchers are incentivized to keep the ball away from the bat at all costs; and as hitters grow better at hitting low pitches, pitchers have fled further, to the zone low and outside.

Of course, the ideal is just to throw strikes that hitters can’t hit; there’s no game theory when it’s a strike whether they swing or not. An ascending leaderboard of in-zone contact rates for both relievers and starters generates some pretty good names:

For those poor few lacking in Chris Sale’s stuff, strategy comes into play: do they throw a strike that has a better chance of being smoked for a line drive? Or throw one off the plate and risk falling behind? The answer, overwhelmingly, has been the latter. 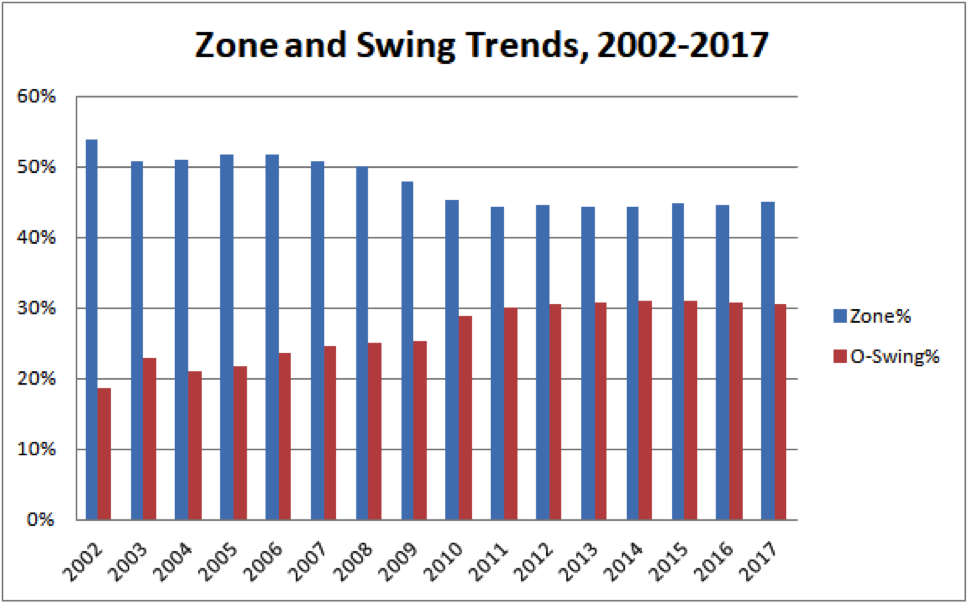 The shift in approach on both sides concerning the strike zone in recent years is the sort of thing that would probably shock the fan of 1987, if we could go back that far. The strike zone has expanded, especially at the bottom of the zone, forcing batters to protect more area than before. They’ve responded to this massive influx of low pitches by being ready for them, proving that a difficult pitch you expect might be easier to deal with than the easy pitch that surprises you. It’s another indication that sequencing, and tunneling, are important assets for a pitcher, to maintain as much of that surprise as possible.

The Wade Miley of today most closely resembles a very dissimilar pitcher in Dallas Keuchel, who has been largely excellent. Their bond: neither of them throws strikes.

This is going to be hard, because that last sentence is already problematic. The era of pitch tracking has unmasked a major deficiency in our baseball language, in that sometimes a strike is not a strike. There are actual thrown strikes, the ones that pass through the invisible box imagined by the rulebook, true regardless of the external world. There are the strikes as called by the umpire. And then there are the strikes resulting from actual play, including all the good and bad pitches swung at, fouled off, or put into play. How we measure a pitcher’s ability to throw strikes has evolved over time to encompass how we understand these different elements.

In 1992, fans would have looked at the respective walk rates of both pitchers and stopped there. Miley’s BB/9 of 5.19 is very bad, they would say, contributing to a league-worst 1.76 WHIP. “Too many baserunners,” they would remark, and fold their newspaper back up. Keuchel’s walk rate is pristine.

In 2012, we would have looked at the pitcher’s zone rates and noticed how rarely they both work in the zone. In the pre-pitch-framing era, we might have shook our head at why Keuchel seemed to make it work while Miley couldn’t. We’d know that it was equally bad news when either pitcher threw it in the zone and earned contact, and chalk up the difference in those contact rates as the effect of stuff.

In 2017, we have these new ways to evaluate command and control. Surprisingly, Keuchel and Miley rank no. 1 and no. 2 in terms of CSAA, or Called Strikes Above Average. Neither pitcher tends to throw straight down the middle often, or is just wildly out of the zone throwing wasted pitches. (Jarred Cosart, who ranks third-worst among starters in Zone%, is very much this pitcher; he really is the stereotypical guy who has no idea where it’s going.) Both Keuchel and Miley can throw strikes. They just choose not to, for the most part.

In Keuchel’s case, it’s that he doesn’t have to. His cutter has been so deadly, and Astros catcher Brian McCann has been so effective at getting it called for a strike, that batters have little choice but to swing at it anyway. Even if they wait, they’re not going to see a better pitch later. Meanwhile, Miley, who lacks such an out pitch, has been forced to behave like this with his slider: 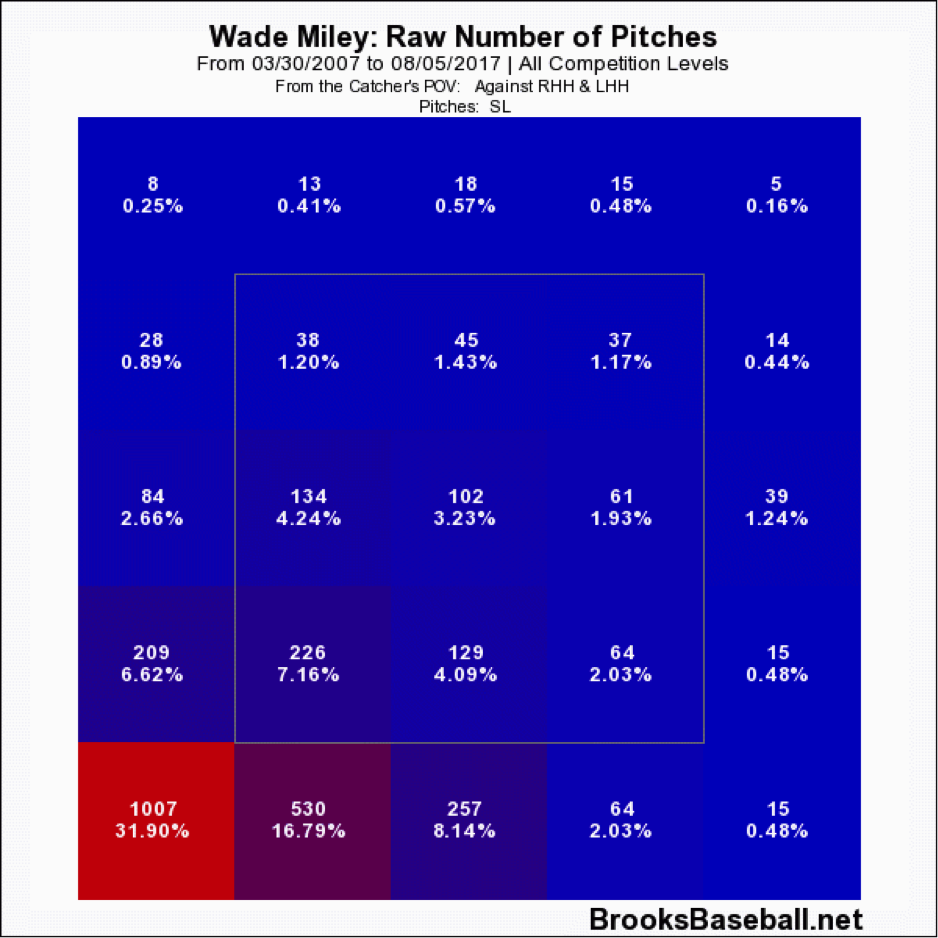 We often talk about mistake hitters, one-dimensional or aged sluggers who can’t control the zone, but they can victimize the hanging breaking ball and the center-cut fastball. Miley is almost a mistake pitcher: unable to get swinging strikes in the zone, and without a deceptive enough arsenal to surprise the batter by changing eye levels and sequencing, he’s essentially forced to live off the edge of the plate for survival. When Miley throws a pitch in the zone and the batter makes contact (and his zone-contact rate is well above average), the result is grisly: batters have a BABIP of .383 and a SABIP (slugging average of balls in play) of .594. The only alternative Miley has is hoping the batter cooperates with weak contact on bad pitches.

It’s not a plan that seems like it should work, and it isn’t really working, though it should be noted that Miley is a pitcher, so he could change his process tomorrow or discover Trevor Cahill’s curve or find two ticks on the fastball in the bullpen. (According to Brooks Baseball, Miley recently reintegrated a cutter to his menu of pitches, first tried out last year.) The one good thing about being a pitcher, after the injuries and attrition and the unconscious expectation of needing to be perfect, is that they’re never quite dead.

Unsurprisingly, it’s Keuchel, not Miley, who makes the best representative of the new non-strike-throwing age. Despite our outliers, the overall trend based on the graph above seems to have reached its equilibrium; in terms of a binomial equation, a pitcher who threw 36 percent strikes would strike out a batter without a bat 49 percent of the time, which already seems dangerously low. But for all these words, neither Miley nor Keuchel has been the true king of the non-strike.

That title belongs to the little-known Dodgers middle reliever Luis Avilan, whose 28.5 percent zone rate this year not only tops the single-season leaderboards in the PITCHf/x era (min. 30 IP), but is almost four percentage points above no. 2. And so far, somehow, it’s still working; while he walks four batters per nine innings, and yields his fair share of baserunners, his ERA is solid and his DRA is a mere 2.59. Perhaps most importantly, Avilan is getting that first strike (57 percent) that forces batters into playing his game. Based on the results, it’s not hard to imagine Avilan or a pitcher of similar talents trying his hand at a 27.5 percent zone rate next year.

One of the limits of sabermetrics has always been in our ability to measure intent versus result. How wonderful it would be to implant evil, mind-reading devices into our pitchers, know exactly how they visualized their success before they failed, how far off their target they wound up. We’ve done our best by controlling the environment, selecting 3-0 pitches against pitchers; we’ve also tried things like tracking the catcher’s glove, to varying success. But while we’ll never unlock Wade Miley’s heart, we can use these new tools to at least guess at what he’s thinking, what he’s trying to do. Everyone loves to talk about heroes and greats, but it’s in the scuffling, the treading water, where baseball is most alive.