Calhoun was the Dodgers’ fourth-rounder in 2015 out of Arizona JuCo Yavapai College. There may not be another player in the minors with a larger gap in MLB-readiness between their offensive and defensive skills. Calhoun has hit 50 home runs since the start of 2016, split between Double-A Tulsa and Triple-A Oklahoma City. That type of power would be impressive for any prospect, let alone a 5-foot-8 second baseman.

The issue is that it’s not guaranteed—or even likely—that Calhoun can handle second base in the big leagues. The Dodgers started giving him reps in left field, where he’d likely be a below-average defender due to limited range and a weak arm. Calhoun has always seemed destined for the American League, as his quickest path to the show is as a designated hitter.

Offensively, Calhoun features a lightning fast bat and excellent barrel skills, and when combined with an advanced understanding of the strike zone, could make him a very productive hitter at the highest level. Calhoun has hit .298/.357/.574 with 23 homers and 24 doubles in 99 games at Triple-A this season, and regardless of where he ends up defensively his path to the majors is clearer in Texas than it was in Los Angeles.—Matt Pullman

Davis, who recently turned 20, is still more a sketch of a player than a finished product. Narrow through the shoulders and with a slender frame at 6-foot-4, he's unlikely to add significant physical projection. He did add 20 pounds in the offseason—up to 185—but has not maintained that weight this season. Davis does have above-average bat speed and a swing path (and pronounced leg kick) oriented for power. In batting practice last year, he hit fly balls that petered out to the warning track. At times, he got in trouble with his swing with popups and soft opposite-field contact. He’s currently a line-drive hitter, though he hit for more power repeating Low-A this season (ISO up to .158), before earning a promotion.

He began last season as an 18-year-old in Low-A, with the Dodgers focused on him getting reps at shortstop (and time at third base). He did not receive much playing time at short this year, but now has accumulated time at second and third base due to an infield logjam at Great Lakes. In extended looks last season, Davis had a lack of feel for short and third. He likes to have fun with his hand-to-glove transfers in BP, and excels coming in on the ball. I do not view Davis as a future utility guy, which limits the ceiling due to the overall defensive ability and height/lack of lateral range.

The hot corner is his likely defensive home. The arm strength is plus, though with some accuracy concerns (scouts that saw Davis in high school liked him as a pitcher, but Davis wanted to be drafted as a position player). Speed is not a part of Davis’ skill set, though he's not a base-clogger. There is high risk here, and there’s a likelihood he doesn’t develop power, consistent contact, or find a defensive home, but he's still relatively raw as a 20-year-old in High-A. —Will Siskel

An 11th-round pick by the Dodgers in the 2016 draft, Alexy received a signing bonus just south of $600,000 to get him to walk away from his commitment to Radford. Alexy's fastball won't overpower anyone at present, but he can touch 92 mph and there's room for projection on his 6-foot-4 frame. The appeal is in the curveball, which projects to average right now, but flashes plus, with tight spin when he's on.

The changeup, as you might expect from a Low-A arm, is nascent, but that he's already in Low-A and having some success at his age is a testament in and of itself. The likely outcome is more middling than anything, but there's room to dream on the entire package taking a step forward if he can add some good weight and a couple ticks to his fastball. —Craig Goldstein

During the pre-Cole Hamels years of his tenure with the Rangers, Darvish was the only law and order on the mound in Arlington. Armed with a half-dozen plus pitches and unwavering confidence, he was his team’s biggest advantage in every game he pitched and a threat to strike out even the baddest of hitters. I’ll put it even more bluntly: he was the greatest pitcher in Rangers history, and now he’s off to Los Angeles to seek even greater fame and fortune as part of the team that’s most likely to come out of the 2017 season with the Commissioner’s Trophy.

I’m going to have to take a minute and back up that statement in italics, aren’t I? Fine. Here you go: Darvish is probably the best starting pitcher on a rate basis in the history of the Rangers franchise, and that measure is the one that matters most to me when trying to state who the “best” pitcher is in a given category. Sure, several Texas starters pitched more innings—Darvish has thrown the 16th-most frames, between Jon Matlack and Darren Oliver—but he was singularly effective in his time on the bump.

Only Hall of Fame icon of whiffs Nolan Ryan even sniffed Darvish’s extraordinary strikeout rate (11.0 K/9), and Darvish spent his Rangers career putting up ERA and FIP numbers that were about 20 percent better than the league average. (For the record, the only other Rangers starters to come close to both over the course of a stint with the team were Hall of Famers Bert Blyleven, Nolan Ryan, and Gaylord Perry.)

The odds of Darvish now becoming the greatest starter in Dodgers history are, uh, long; beyond the team’s lengthy history of tremendous pitchers, he’s not even the greatest starting pitcher in his locker room. But Darvish is an elite starting pitcher, at least in terms of performance over reliability. In fewer than 800 innings over five seasons, he’s been worth 19.4 WARP. That’s approximately four wins per 160 innings, which is ace-level performance. On the most basic level, Darvish is a wrecker featuring four regular pitches (four-seam fastball, sinker, slider, and cutter) and four show-me offerings (changeup, curveball, slow curve, and splitter). Perhaps the coolest thing about Darvish’s extensive repertoire is that he can get swings and misses with any of his offerings—only his sinker has a whiff rate below 10 percent, according to Brooks Baseball: 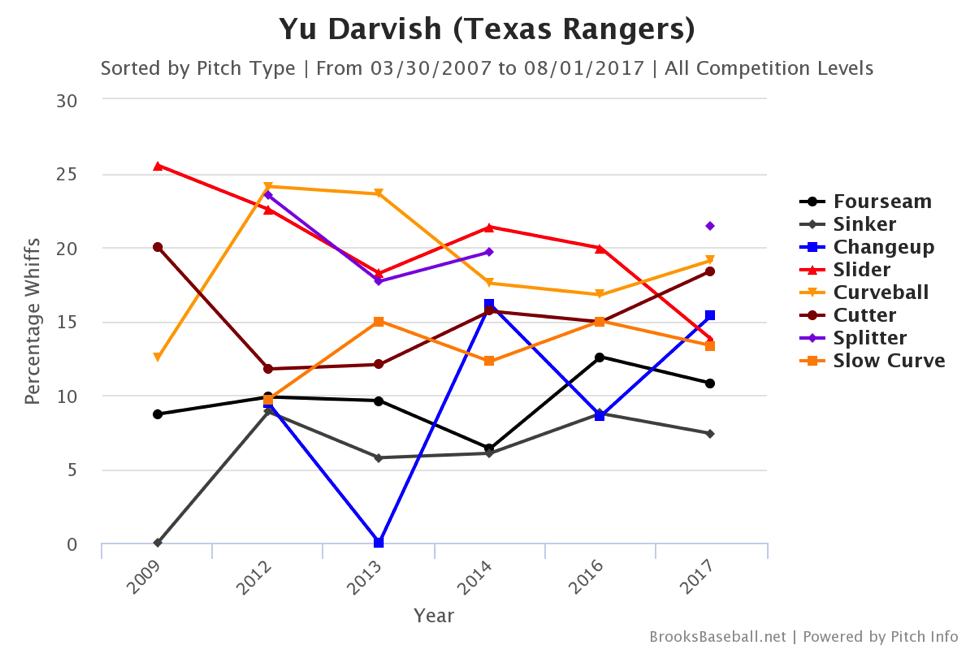 So that’s the good news: the Dodgers have acquired the most elite strikeout-driven starting pitcher in the game. But Darvish also comes with some well-documented warts. He’s only under team control for two more months—three, if you count the inevitable October run for LA—and his injury history is spotty. In addition to missing the entirety of 2015 following Tommy John surgery, Darvish hasn’t topped 190 innings in a season since 2013. While 2017 might be an exception—he’s on pace for close to 200 innings—this season has also been his least effective.

Darvish’s strikeout rate is down to merely good levels from his previous seasons, and the fly-ball nature of his contact has led to more dingers, a higher ERA, and higher FIP than in his previous seasons. This is, so far, his worst season in America, even though his DRA (3.05) is almost a full run lower than his ERA (4.01) and ranked among the AL's top 10. It's not, however, the sparkly below-3.00 mark that it was earlier in his career before elbow surgery.

There’s every reason to believe that the Dodgers (and Darvish) will benefit from the excellent framing of Yasmani Grandal and the comfortable confines of Chavez Ravine, so one might expect an uptick in all aspects of Darvish’s performance as the season comes to a close. (Spending an August out of the Arlington heat probably won’t hurt either.) Measurements of just where Darvish falls among baseball's top-50 or top-25 starters might vary depending on who much you value reliability and big inning totals, but the general consensus is that he’s safely one of the 20-30 best starters in the game.

Acquiring Darvish also now gives the Dodgers a shot at either extending him early or laying the groundwork for a new contract this offseason. This might be an underrated aspect of the move—the Dodgers may have a surfeit of pitchers and pitching talent, but they always tend to scramble for starter innings. With Julio Urias out of the picture for now, and guys like Rich Hill and Alex Wood always open questions, the Dodgers probably need at least one “reliable” starting pitcher for 2018 and forward. (Let’s all just assume that Clayton Kershaw will continue to be upright, because the alternative is too sad to dwell on.)

By snagging Darvish now for minor-league talent, the Dodgers can choose to bring their considerable financial resources to bear and work to retain the talented hurler. And let’s face it, Darvish’s injury issues aren’t the sort of thing that scares off the Dodgers; they practically have a MASH ward set up 90 feet from the pitching rubber. If they want to make a deal work, I’d bet that they could. He’s their type of pitcher. And really, everything about this move fits. It feels right.

Darvish’s personality—and maybe even his tabloid-adjacent personal life—seems better aligned with LA than Arlington. His placement in the rotation, slotting behind the Hall of Fame-bound Kershaw as the world’s greatest no. 2 starter, seems to make sense, even though his performance has been distinctly that of an ace, not a second banana. His handedness seems to fit, sliding in like a key into a lock between the Dodgers’ copious talented lefties. Heck, even the Dodgers’ history of acquiring Japanese pitchers—a long line from Hideo Nomo to Kenta Maeda—seems seamless.

It’s not hyperbole to say that after this deal, the Dodgers are the best team in baseball. The reason it’s not hyperbole is that before this deal, the Dodgers were probably the best team in baseball. Their rotation wasn’t even a weakness, it just was a question: “Which incredibly effective pitchers will be healthy enough to throw in October.” With Darvish on board, that question doesn’t change, but the answer probably becomes something like: “We don’t know, but there sure will be a lot of them.” Having the best team on paper isn’t everything, but the Dodgers have done everything in their power to be ready for a World Series win. Darvish is the last, and perhaps best, move of the trade deadline—it just makes sense that he’d end up on the best team. Now let’s see if Darvish gets his Hollywood ending. —Bryan Grosnick

You need to be logged in to comment. Login or Subscribe
collins
Did Texas get a better return for 3 months of Yu than the A's got for 2.5 years of Gray?
Reply to collins